Mark M0NOM had posted on our radio club forum about the SOTA weekend. I had seen this quite late on, but thought I should do something to support the event.
On the Saturday I had already planned to visit my radio friend in Coniston, but as MM0FMF and G1ZAR had mentioned on the GM13 forum they would be taking 13cm’s I had to take the kit up with me

.
13cm’s was setup in the garden with the 25 ele on a camera tripod, while waiting for them to turn up I chased a few on 2mtrs F.M.
Then I heard Andy working Steve S2S on 13cm’s, not very strong, but luckily Andy heard me and they moved their aerials in my direction. An obscured path, but Andy on Stoney Cove Pike ended up being 5/7, we had a bit of a Rag Chew and then Steve on St Sunday Crag was 5/3.
Sunday I had plans with my Mate Chris M0KPW, to visit the Jamboree on the Air site to do a reconnaissance , but he suggest we get out early and do our local one G/LD-049 Kirkby Moor.
Chris concentrated on 2 mtrs F.M. which sounded extremely busy and I used my current favourite mode QO-100 Satellite.
I’ve been using this mode for a while and am starting to get a few SOTA chasers on there.
My usual frequency was clear so I called CQ SOTA and it wasn’t long before the chasers came back.
The battery was just about exhausted after 70 mins of operating and it was time to meet up with the Scout leaders.
I manged 38 in the log on QO-100, with a couple of other portables, not SOTA’s though . A lot of Germans, but also Brazil, Greece, Russia , South Africa and others in the log.
As it turned out the weather was so much better than the Saturday, I asked my wife if she fancied a “Walk” ! up Gummers How G/LD-050 after tea.
Then she saw the rucsack, my time was going to be limited, but she took her Kindle and I got an hour on the air.
It was a lovely Autumn evening and as we ascended the crowds were descending. So we almost had the top to ourselves.
Once again my usual frequency was clear. The Satellite was a bit quiet on the Sunday evening, but I still got another 20 QSO’s in the log, including three Brazilians and the Sudan.
Thanks for organising the weekend Mark, hopefully I’ll take part for the next one also 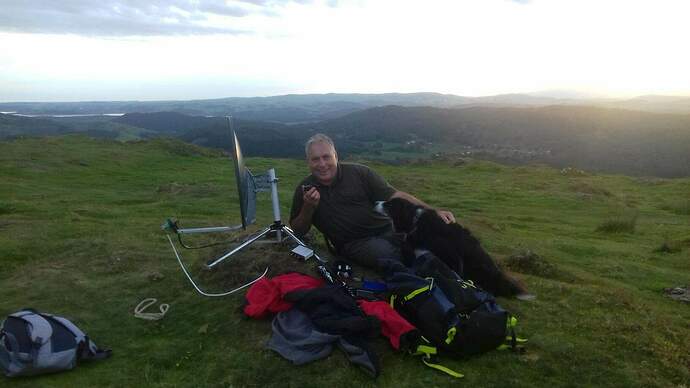