…well, if the thunder steers clear

There is a violent thunderstorm in progress at Leatherhead, Surrey, as we speak.

The weather radar at this time shows developing thunderstorms over Burgess Hill, East Grinstead, Kingston Upon Thames, Chigwell, and a big one over Ewell - but compared with the hammering that the central Highlands is getting they are all pretty small! Anybody activating this evening should wear rubber soled boots!

Point to IO87 tonight Tom, I have the big linear working and EME preamp up on the mast.

Unless there is thunder about then I’m in the pub!!

There were no electrical storms, but plenty of rain during tonight’s Fun Evening / 2m contest. But almost as soon as I set off on the drive home, there was sheet lightning and a huge crack of thunder, and that storm has continued spectacularly for over an hour now and is still going strong as I type. 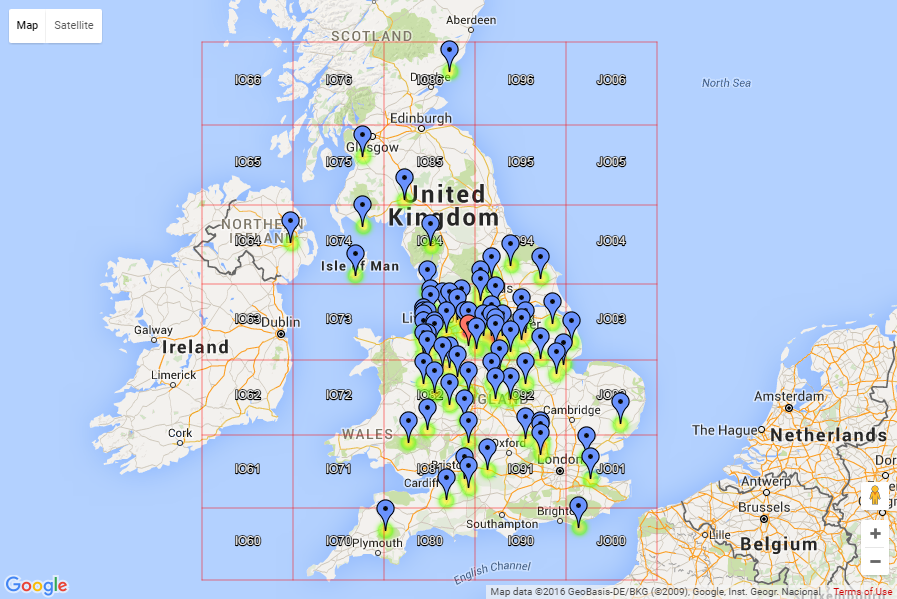 Would be an idea to be spotted on ON4KST.
I did look for you but it was like trying to find a needle in a haystack especially with OZ being 59+++ much of the time

Superb tropo conditions though (and I see a certain M1EYP was ODX for at least one entrant!)

SOTA Fun Evening tonight. The band of focus will be 70cm, and mainly SSB of course to coincide with the RSGB UK Activity Contest on 432MHz.

Jimmy fancied an outing - especially when the word “pub” was mentioned, and that he hadn’t done Cloud yet this year, meaning there was an activator point on offer too!

So the three of us drove down and dropped Liam in Congleton, then Jimmy M0HGY and I made straight for The Cloud. I decided to have a go on 17m for a change. I made 2 QSOs on SSB and 6 on CW - DXCCs were SM, OE, OK, DL, two into EA and finishing with two into the USA (KA1R and AC1Z) which was nice.

Ray and the lads were completing their social outing at the Coach & Horses in Timbersbrook, so Jimmy and I followed them down there for pre-match refreshments. We then made our way home for the big England-Iceland match. The less said about that the better. We might have had a chance against Firman’s Freezer Foods, but Iceland were simply too strong.

Tuesday 28th June 2016. Wx forecast was dodgy but improving, so I decided to go for the usual summit /P participation in the 6m contest.

Sure enough, I needed to be inside the bothy bag for most of the first 90 minutes, sheltering either from fine misty drizzle or from midge clouds!

There were short periods of Sp.E on and off through the night - very short - barely long enough to complete a QSO in some cases. I worked YL Latvia KO37, SM Sweden JO58 and EA Spain IM98.

Harrington Arms, Gawsworth for a pint of good ale and a pickled egg on the way home.

It tastes better if you dunk it in your beer!

It was OK Walt once I’d sprinkled it liberally with the celery salt.

I think I’ll stick with my favourite pub snack … vinegared whelks. (A London delicacy!) I could never develop a taste for jellied eels, though.

A bit OT now but near my office in Japan, a typical beer snack is horse meat sashimi… I prefer the edamame!

I only went for the pickled egg because they had run out of Spearing’s beef pies. I do like whelks (sounds like a Blackpool delicacy to me). I too have never got on with jellied eels; prefer stewed eels with mash and liquor if I must, but you can’t beat a good old rock and chips in that part of the world.

I like jellied eels but I LOVE whelks with lots of pepper! However, with a pint of real ale in a pub I prefer a pork pie with a large helping of mustard - and NOT that anaemic French stuff, either!

Ah, yes. When I lived in London in the sixties and seventies, rock salmon and chips was my favourite at the local chippie. For the uninitiated, rock salmon is actually dogfish … a cartilagenous fish like a small shark. In most parts of the UK outside of London and the south-east, they throw them back! What a waste …

In your part of the world, I go for a meat and potato pie with lots of gravy.

Time for another SOTA Fun Evening. Sunday afternoon saw at least 8 SOTA hills activated on 2m SSB, so could we improve on the modal 1 for a Tuesday evening? After all, this is the 2m UKAC of the year with the most daylight to play with.

The weather for the evening looks very pleasant - no rain, some sunshine, and enough breeze to keep the mozzies away. Excellent.