This was the first time this year I’d visited Seat Sandal, G/LD-022, and in fact when I think about it the year before I was here I didn’t activate it because it was too early in the morning, I only had one QSO at about 6:30.

After a touch of man-flu had knocked me out on Saturday I was really glad the weather had turned from Saturdays ‘almost dark at 2pm’ to a very promising, if bracing, outlook on Sunday. Alex and the girls were down in Blackpool so I threw a few bricks in the rucksack and headed off on the motorbike. Someone had helpfully dropped a continuous trail of oil right from Troutbeck Bridge to the top of Dunmail Raise so I took it easy. 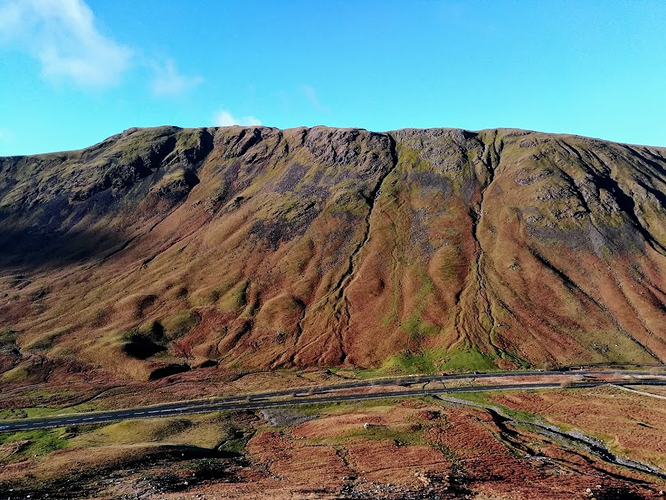 Parking at the lay-by next to the AA call-box I headed up the track following the road, but then deviated off up the ascent of Seat Sandal, way too soon to hit the track that ascends the westerly side. Last time I’d been up here I’d actually come up by mistake - it’s amazing what a year does to your sense of geography! 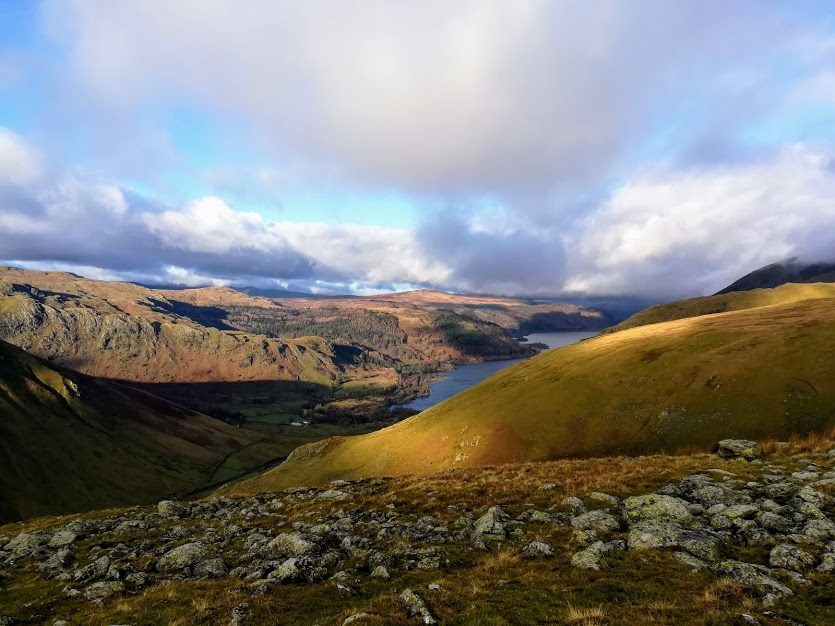 This is no easy ascent, but then I’m not sure there is one for Seat Sandal, it is pretty punishing from all sides! There was a stretch when I was on hands and knees and could have done with my trail running shoes in preference to the walking boots. This is the angle of slope at one point: 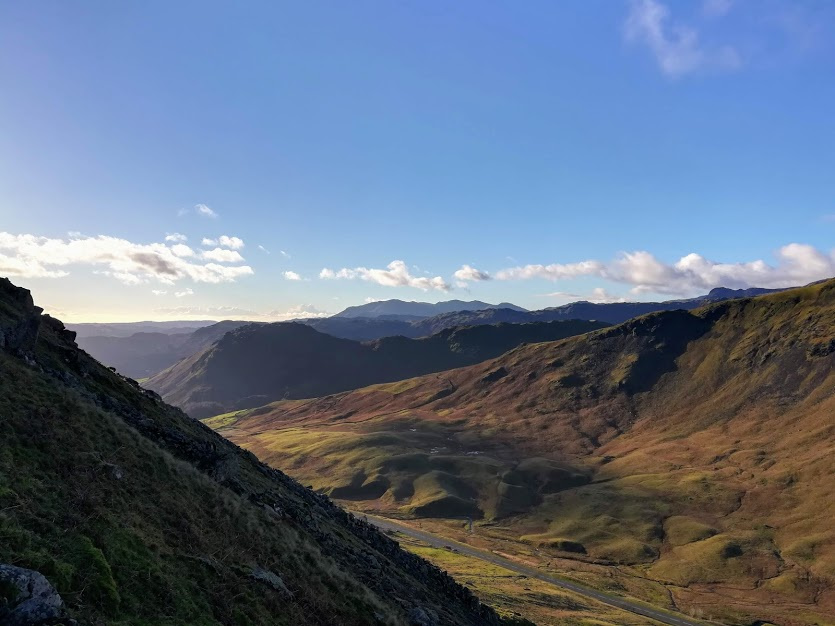 Anyway… I do this to myself, clearly. Early on in my SOTA career I’d had a catalogue of approaching a summit from the most direct and punishing route, clearly I’m not learning! To add insult to injury Seat Sandal is one of those summits which keeps the view rolling off nicely so you think you’re there, and then there is more, and then there is more! Anyway I got there eventually! 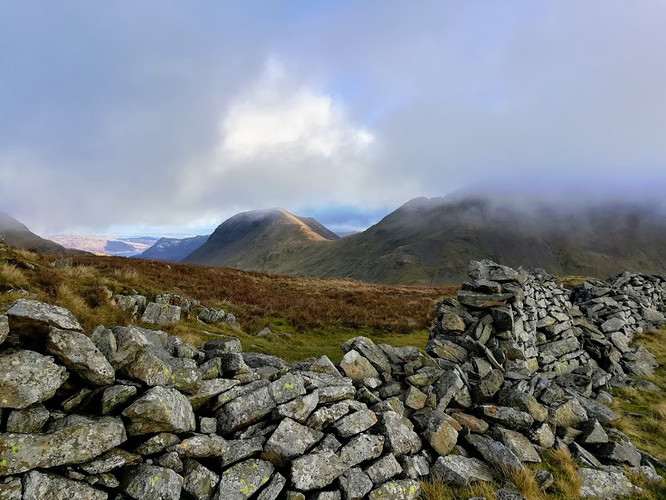 The SOTABeams QuadBander was setup at reduced height due to the biting North-Westerly wind, and having linked for 80m I immediately went back to 20m for a potential S2S. That didn’t pan out but I did work several stations and then a spot came up for TF3EK/P on TF/SL-190 in Iceland. I listened for several minutes and he was coming and going with QSB. I decided I probably wouldn’t be able to work him and went to reclip the antenna just as there was a lift. Just after Manuel I managed to log a S2S which is my first Iceland contact!

I then got an unexpected local S2S contact with G7HEM/P who was on the Old Man of Coniston and this was truly line of sight - the benchmark was clearly visible silhouetted against a white sky!

Having finally linked for 80m I got an amazing run of contacts, with some stations maxing out the FT-857’s S-meter. One interesting contact was with OZ1NJL, reports were 58 & 59+10 - he was using a 15.2m wire antenna via a 9:1 balun at 1cm height off the ground!

I then moved to 2m and decided to use my new homebrew 8 element coaxial colinear which I had tested for SWR but not much else. I taped this to the 10m mast and apart from one complete collapse of the mast at one point stayed up and worked well. With nothing to attach the mast to I resorted to holding it in the crook of my arm - and in anticipation of this ‘needing to operate standing’ scenario I had purchased a camera strap from eBay to hang the FT-857 off which worked beautifully, the clips on it sit either side of the plastic section on the fold out foot and it didn’t swing away from me when bending down to pick up the numerous dropped items, so well worth the £8.54 it cost! 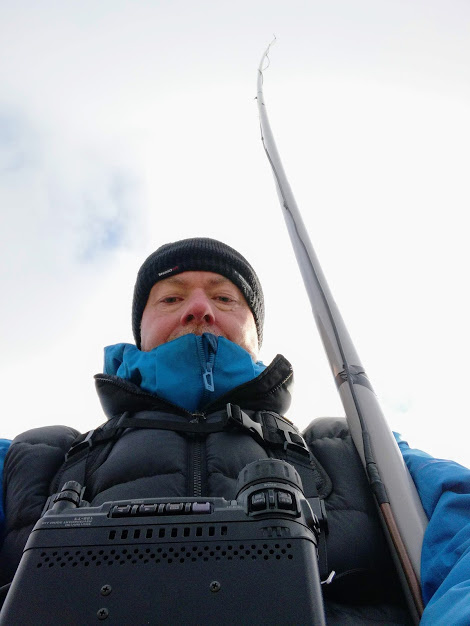 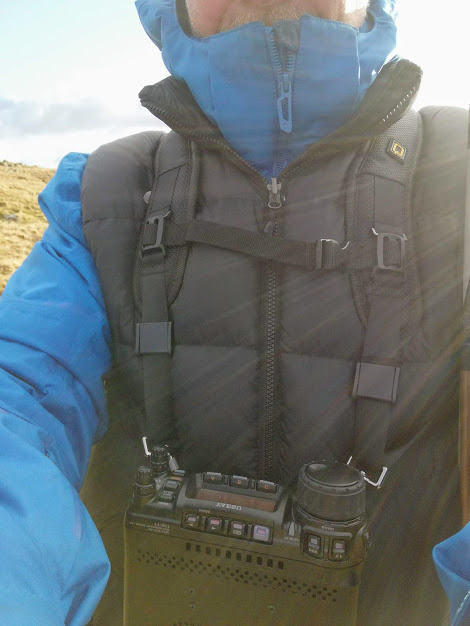 The antenna seemed to work really well but it is a big one - maybe best left to summits where the pole can be strapped to something, but I was itching to try it!

By this time the views had come out nicely so the descent (via the path this time!) was filled with magnificent scenery - just don’t walk and look at the same time.

Off down to London now on the train - I have a training course for two days. This follows on from a previous one and no doubt I will be educating some of the attendees on the magnificence of the Lake District. Last time I talked to folk who didn’t even know it existed. North of the Watford Gap syndrome.

Thanks to all Chasers, hopefully I will be able to make good use of the +3 point winter bonus over the next couple of months. Some more photos here. 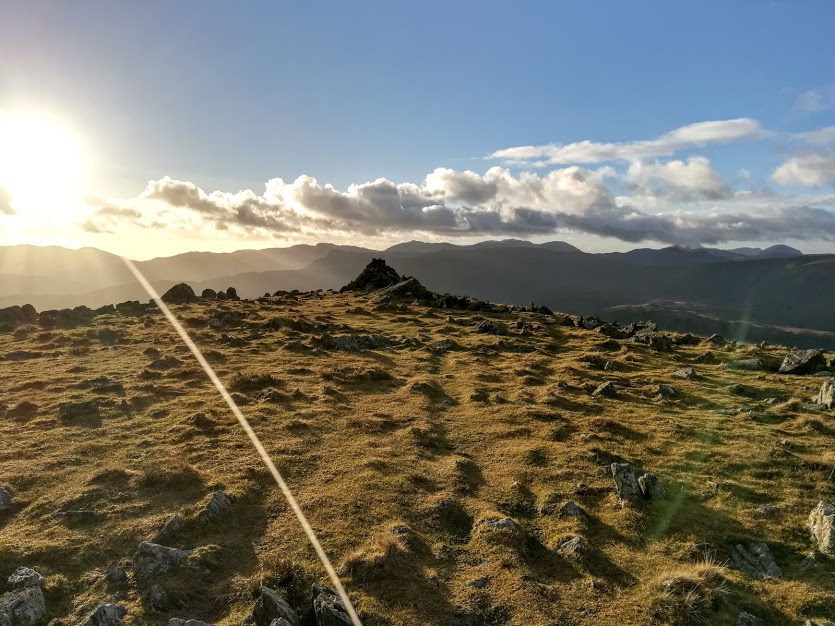 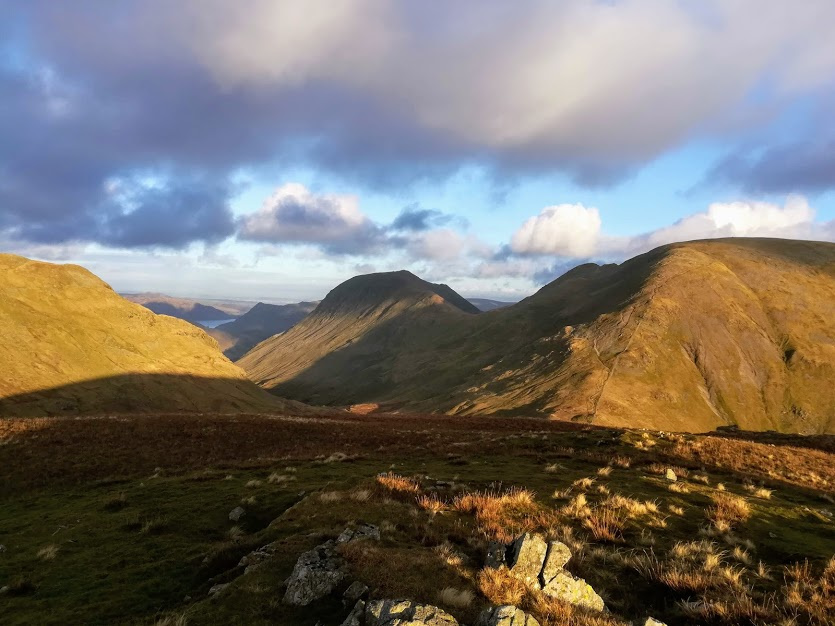 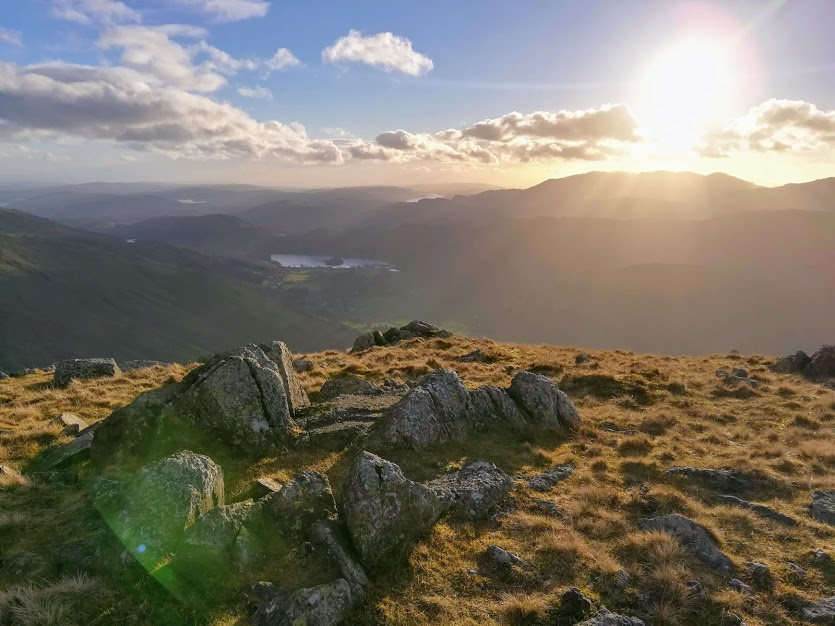 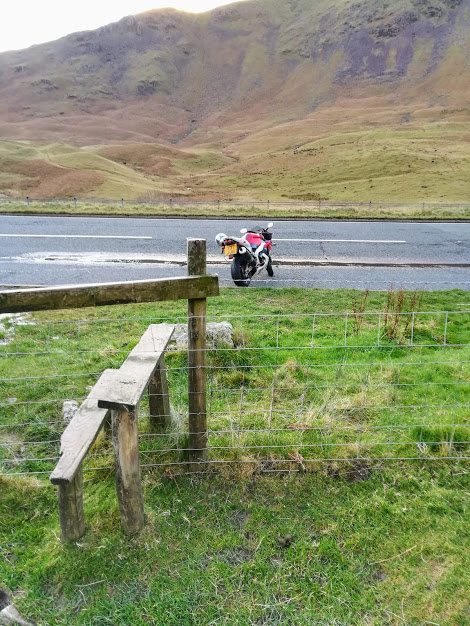 Great report Mark. Sorry but I was not around this afternoon…catch you again soon.

This is no easy ascent, but then I’m not sure there is one for Seat Sandal

Well done, Mark. I would like to do this summit in the New Year.

UPDATE: re-reading your post you mentioned Dunmail Raise, so you probably took the path EAST (sorry I said West) up Raise Beck and then south near and to the summit.

I wonder if the longer route parking on the A591 just south of Town Head and walk the footpath NE up by Little Tongue Gill then anticlockwise round the summit and approach it from near Grisedale Tarn, is any easier?

That’s a tricky one in the high winds. I just tried my new Sandpiper 2m 3el yagi on G/CE-005 on a camera tripod yesterday. The tripod blew over in the high wind and bent one of the directors. I switched to a guyed 3m pole after that - takes longer to put up but lighter and more stable in the wind.

I think you mean east up Raise Beck Andy. I haven’t tried your suggested route, but I would council against the route up from Grisedale Hause if you’re trying to avoid a steep ascent

. If you meant the final ascent from the north, then you’re probably as well just doing the route up Raise Beck, Mark described. The other option seems to be a track marked on the 1:25k map up to the shoulder SW of Seat Sandal. I haven’t tried that either, the final ascent doesn’t look too bad, but it’s just as steep lower down. It’s a nice group of summits, but I’m glad I negotiated Cofa Pike without an audience (another reason for starting early)

The track up Raise Beck is fairly easy, and so is the path from the col overlooking Grisedale Tarn southwards to Seat Sandal. That is the route that I would recommend - plus the continuation from Seat Sandal to Fairfield is fun.

Just to clear up confusion, probably caused by myself, here is the route up and down I took: 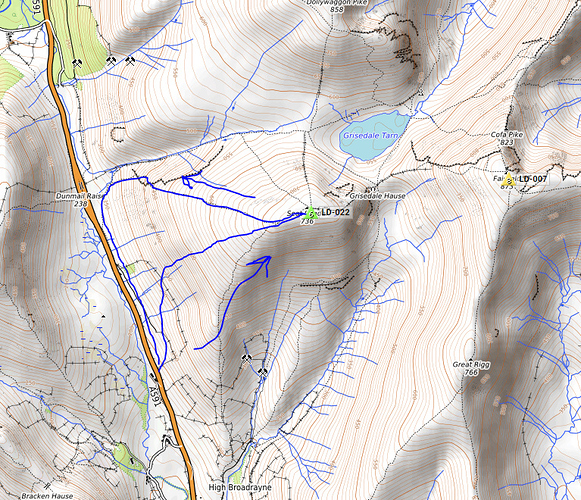 The route that I took down is a distinct path which is used primarily by fell runners it would seem. It isn’t quite as punishing as the direct route I took, but not far off and not much fun descending via that route either to be honest.

I would recommend the alternatives of either Dunmail Raise to Grisedale Tarn then up via Grisedale Haus, or up from High Broadrayne to Grisedale Hause. This second longer option is an attractive path to follow. Of course the obvious day-walkers approach would be to ascend from a walk on the Westerly flank of the Fairfield Horseshoe via Great Rigg and Fairfield, although you would need to arrange your transport as this is not a circular option.

I have not approached via the path on the North side of Seat Sandle - it looks from the contour lines like the height gained following the beck from Dunmail Raise takes the worse of the steepness out compared to the approaches from the West.

Note that the ascent via the beck from Dunmail Raise is fairly steep in places but more manageable given the well-defined path.

Note that the ascent via the beck from Dunmail Raise is fairly steep in places but more manageable given the well-defined path.

Yes, I only ever had trouble with this well-used path once. That was on the occasion I activated Seat Sandal myself, it was winter and the rocky section just below the high point was sheeted over with a thin layer of green ice. It had thawed away by the time I descended! The path that approaches the summit from the northwest is difficult to find on the ground and probably pointless anyway. Incidentally, I once climbed Dollywagon from that col, but never again - purgatorially steep grass isn’t my scene!

I have not approached via the path on the North side of Seat Sandle - it looks from the contour lines like the height gained following the beck from Dunmail Raise takes the worse of the steepness out compared to the approaches from the West.

This is the only route I’ve ever taken when activating this summit. The ascent up Raise Beck towards Grisedale Tarn to what I can remember is steep, but enjoyable with it walking by a river. Just before to get to Grisedale Tarn, you turn right and walk up a path by a wall to right of you all the way to the summit. This bit to what I remember is very steep and punishing, but compared to the other routes you have mentioned I think this is the best route.

I agree with Jimmy. The route you took Mark seems unnecessarily punishing. Just walk up by the stream from Dunmail Raise, then turn right at the wall just before Grisedale Tarn, and follow it to the summit. Much easier than your route.