The only thing with that is that G/SP-013 + G/SP-015 is insufficient to burn off the calories!

Just seen the photos Tom and Nick. Staffordshire it is for me! Massive Oatcake. Blimey I did miss out didn’t I… Unlikely to go back though now. I got a transfer to North Yorkshire in March 1993, sold up and haven’t been back to Stoke since.

I had both sorts for lunch today - Staffordshire rolled up and containing cheese melted in the microwave and a Scottish triangular type with Cambozola slices.
73
Rod

Poveys oatcakes from Leek, can’t be beaten. Don’t get me started on the Staffordshire v Derbyshire oatcake argument.

I’m getting mine from Take A Break in Leek - not sure who the supplier is - I’ll ask in the morning - they’re very good!

My XYL’s family are from the Ashbourne area of Derbyshire. Yet the oatcakes her mother makes and now the ones my XYL makes are most definitely Staffordshire style. Very queer indeed.

“How queer” “Where’s me washboard?”

Derbyshire oatcakes are similar to Staffordshire ones, just a bit thicker. Lots of rivalry due to the shared border.

I used to live in Ashbourne on the Staffordshire / Derbyshire border and I was not aware of the difference. Not had much luck finding any in Durham… 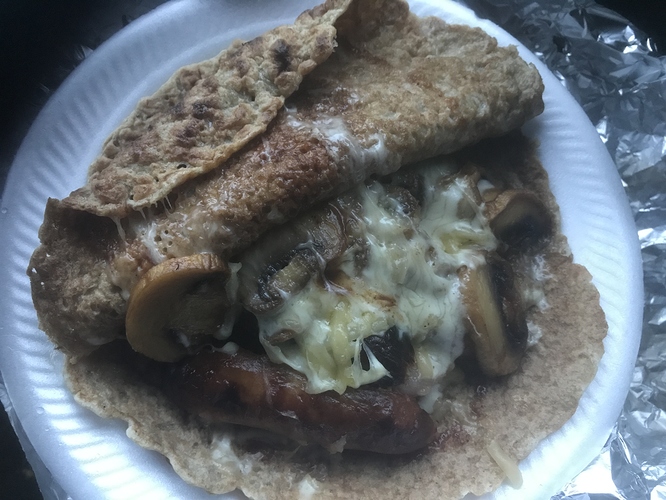 @G4OBK seen / heard on 12m FT8 this morning. Also heard JO01 and a Swedish station. Only station that worked me was M6UKZ in IO82. The spot message from DG1NPM came 25 minutes after I’d gone QRT!

Flavours Challenge in more ways than one… This appears to be Leek Oatcakes, sausage, mushrooms and cheese. I imagine our EU mainland friends think this is a strange conncoction. Having said that, Victor GI4ONL and I were served with Garlic Soup as a treat on our last breakfast in the Czech Republic on our last SOTA visit there in Sept 2019. Now there is a vaccine on its way I think it is safe to say we will be returning there later next year for another tour. 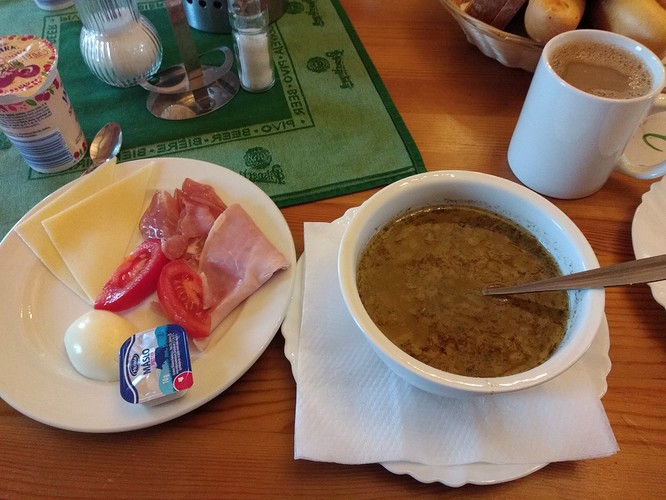 When I did a festival gig in Bahrain a couple of years ago, I was surprised that the hotel served vegetable fried rice for breakfast. Very pleasantly surprised!

On my travels about the world for work and pleasure I learned very early on… always eat the “local”
breakfast. I particular enjoy what is known as a “Full English” or “Full Scottish” etc. breakfast (eggs, bacon, sausage, mushrooms, tomatoes etc. etc.) but it’s never seems to be done right once you leave the UK/Ireland. That’s not a critique of other countries abilities to cook, just they can’t get the same ingredients. So I always eat the local breakfast instead. And, TBH, why travel around the world and not eat what the locals eat? Doesn’t make sense to me to fly thousands of miles and then eat what I can get in my own kitchen!

I remember that Garlic soup Phil and the look on your face when the lady set the plates down, delighted to give us such a “treat”. IIRC we both polished it off and expressed our gratitude, despite the fact that it was the last thing we wanted for breakfast !
Roll on the end of Covid and the freedom to travel again.

Doesn’t make sense to me to fly thousands of miles and then eat what I can get in my own kitchen!

So true Andy! When my family first started holidaying in the Canary Islands, we enjoyed the paella, local sausage, fish casseroles and Dorada beer. We didn’t really understand the popularity of the “British” pub serving All Day Breakfast and John Smith’s Extra Smooth!

And, TBH, why travel around the world and not eat what the locals eat?

While I 100% agree, I do like the fact that I can follow up local breakfast with a breakfast dessert of Cocoa Pops without the kids asking for some and the wife giving me a hard time. (Longest time not travelling for work since 2005

Doesn’t make sense to me to fly thousands of miles and then eat what I can get in my own kitchen!

Eat whatever they give you when your flying… On a long haul flight, I think it was Emirates. Fish curry - no choice as the English Breakfast option had run out. When night blurs into day on a long haul and your hungry you will eat 'owt!

Longest time not travelling for work since 2005

I got my long haul work travel right down and was making only 1 European business trip a year over the past 8 years. Here’s what is mad, I always had to travel economy class and being diabetic, the result of a UK to Korea flight plays havoc with sugar control for a few days and you have industrial grade jet lag. Normally you get over the jet lag and have got to the point where you can do a day’s work at the client’s premises, get back to the hotel, eat and enjoy bars etc. in a foreign place, get back to hotel and work/answer emails till 1/2am, sleep (and actually sleep) and then wake up and repeat it. Only to have to fly home and get your body clock and sugars all mixed up again

You had the delights of 11hrs on a 747 plus the hours before it flew and the worry getting through immigration and if you’d find your bag at the carousel. Then changing to a normally much hotter and humid climate etc.(Korea/Japan) and the delights of getting from Incheon Airport to either Seoul or worse, Suwon. However, I’ve been in Korea when it was -15C in Seoul and my hand partially stuck to a metal handrail entering the subway! All made more fun in that there are no long haul flights from Edinburgh to Asia, so it was either a change at CDG, Franfurt, Schipol or Heathrow. So there was always about 6hrs total waiting in airports there and back.

So there was plenty of stress with the travel, stress with how it affected my Diabetes and the final tidbit, the stress of “go out to our client and fix their issues and don’t come back till they’re happy”. Because it’s not like there’s enough stress to start with. I have to say that I must have done OK because clients asked for me to go back several times.

So it does become a chore and humdrum and yet I miss it terribly… but don’t want to do it again! Does that make sense?

When are you going to get an all-in-one fully implanted glucose monitor & pump, Andy?

OK, time to bring this back on topic and reinstate the metaphor. Although I suspect I’ll have to let that slip again at the conclusion of this post!

It was my only proper opportunity to add some more summit multipliers before the end of the 2020 Challenge. I opted to head south to Herefordshire and do the last 3 WB’s left to complete that region in 2020. I checked and double-checked the latest Covid rules and guidelines, and all seemed to be so. Herefordshire and Cheshire are both Tier 2, and travelling through Tier 3 to get there is permitted. I don’t know about stops on the way, but just to make sure, I limited my fuel and food stops to Tier 2 locations.

For all three summits, I took advantage of the activation zone rule!

I parked due south of the summit close to Furnishers Plantation. On the map, the route starts and ends with a PROW, but between the two is a seemingly non-PROW track. However, on the ground it was clearly OK for access, was clearly a public path, and was being used by other walkers. 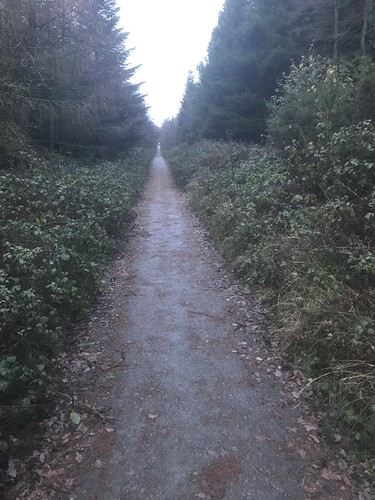 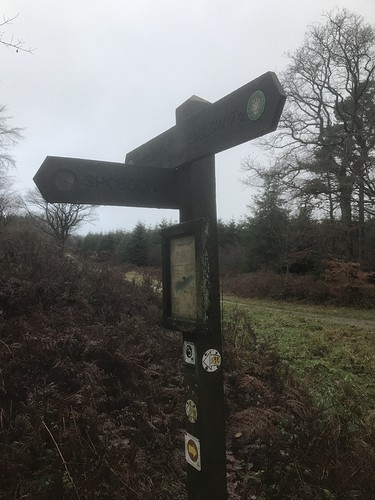 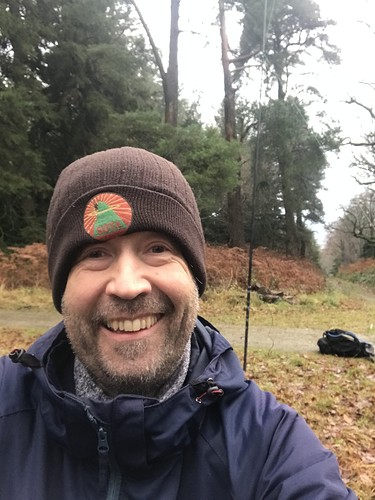 I set up at the top of that path, not bothering to turn left and attain the true summit. It took ages to gather four “secure” contacts. I actually got 4 on 12m FT8 and 1 on 2m Fm. However, one QSO on 12m was D1DX from Donetsk People’s Republic, a proto-state not recognised by the UN. So I didn’t want to leave that as one of the four!

Having done Shobdon Hill up from Byton on both previous occasions, I couldn’t believe how quick and easy this route was!

Usual approach from Hergest Croft. I got into the AZ just after the first interception with the disused racecourse and set up in the heather beside the path. 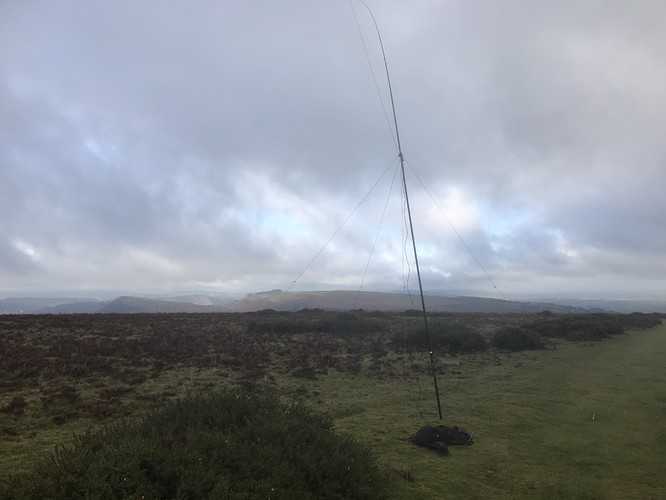 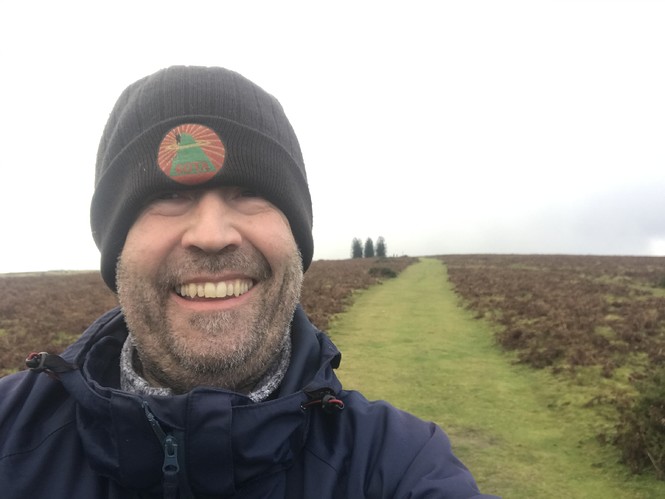 Three quick contacts on 12m FT8 then again I was made to wait for the fourth!

I’d only done this one once, way back in 2006. I’d been putting off a repeat due to access concerns. However, in conversation with Rod @M0JLA, he pointed out that the short PROW from the south climbed into the AZ close to Jones’s Coppice, south 1.5km SE down the long ridge from the true summit.

This path was appalling. It was all on sticky slippery mud that I was very apprehensive about descending. There was one bit where a big mound of this soil had been dumped immediately beneath some low branches making it very difficult to get past. I did so with some difficulty, but already decided not to attempt to descend the same way.

Once on the ridge, I turned left and dropped to the saddle. From here, a more graded and safer track led back to where I’d parked. I set up at this junction of tracks 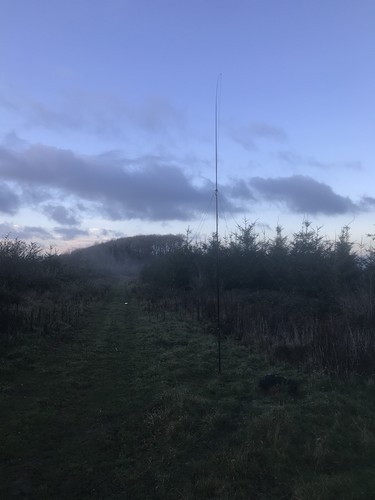 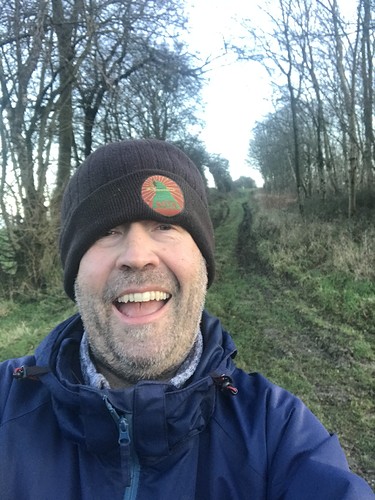 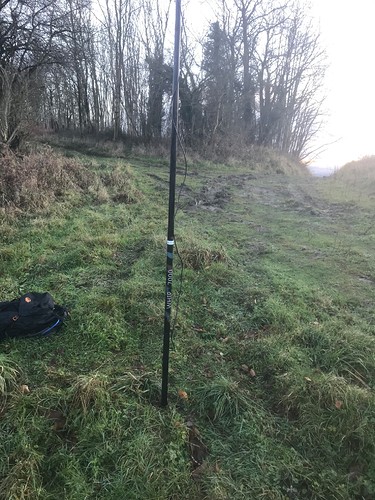 Again, I got stranded on 3 12m FT8 contacts! A local station provided the 4th on 2m FM. The descent route was much better and I remained upright. The gate at the bottom was padlocked, but there was a wide gap at its side to walk through, suggesting that this route to the ridge is much more customary than the PROW. I will probably contact the relevant officer in Herefordshire with regard to the state of the PROW on which I ascended.

Despite the early start, I remained alert for the drive home, assisted somewhat by Red Bull. At home, Jimmy @M0HGY and me made some homemade “Christmas Scotch eggs”. For the meat layer between the egg and the breadcrumbs, we used pork sausagemeat stuffing with apple and cranberry, seasoned with nutmeg and English mustard. 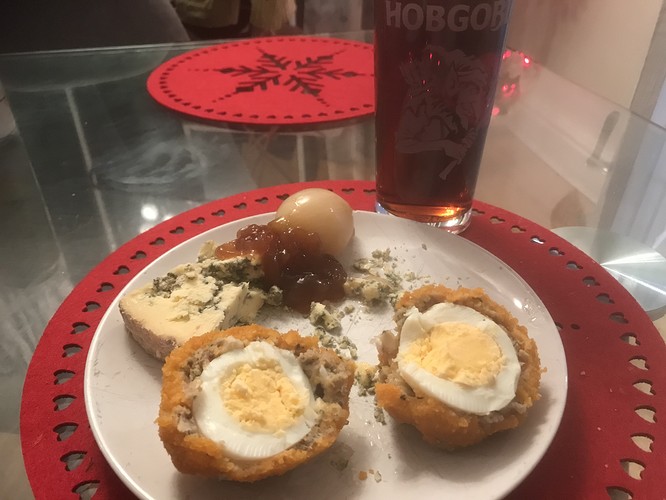 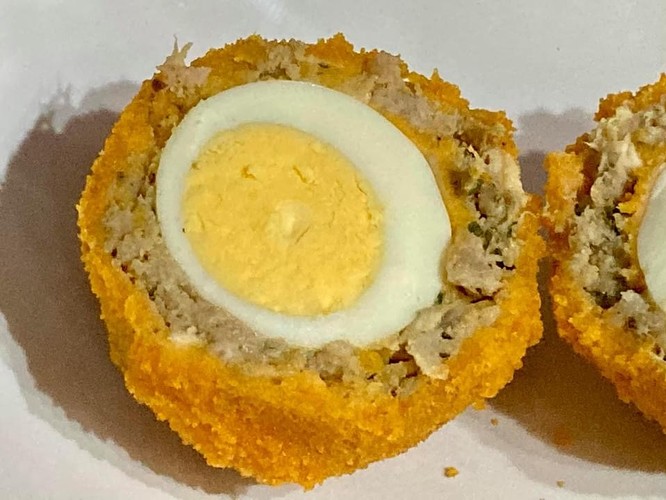 There you go. Flavour metaphor duly abandoned. Now about to go up The Cloud G/SP-015…

Aha. Not much point reporting them I guess. Real nuisance for a 6’3” block with a rucksack and a pole to get past even so!