Please find a link below to a short video on my SOTA Activation of Ailsa Craig GM/SS-246: 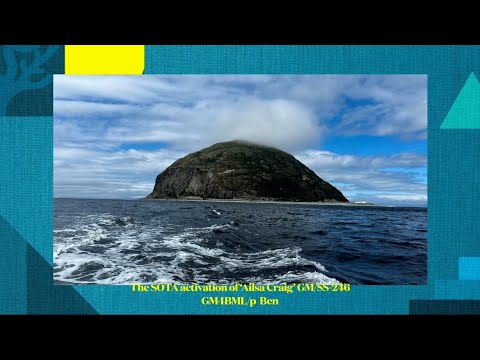 If you like it, please give me a thumbs up

if you don’t, I won’t be offended, hahaaa.

Well done Ben and team BML👍. Thanks for the summit…was great fun to chase you.

Nice one Ben. Shame the weather wasn’t a little better for your trip.

What a brilliant trip you had. I really enjoyed watching your video. Growing up in west central Scotland, Ailsa Craig (Locally AKA Paddy’s milestone) was a well known landmark. Was great to see it up close.

What a brilliant video Ben, I slipped into the portable station at our Raynet event and was totally chuffed to work you, well done to you and the team, what an adventure.

Thanks for posting the fb video it brought back some good memories! The path was quite well defined when we were there, obviously not much footfall other than SOTA operators… Hope the going wasn’t tougher than I led you to believe.

Apologies but due to family issues wasn’t able to listen for you, guess there’ll be another activation along in 7 years’ time to give me the complete :-s

Really enjoyed the video Ben, thanks for doing it. You did well with the activation considering the dank conditions and the rough seas. I like the featured shot of the old boot! I wonder how long that has been there and whether it belonged to one my old friends, the lighthouse keeper Donald Michael MBE, who was GM0KCY (Now SK).

I had the good fortune to once know Donald, who was the lighthouse keeper on Ailsa Craig from 1983-1987. He retired to Girvan around 2000, not long after the last lighthouse he was keeper to, Butt of Lewis went automatic. I lost touch with Donald around thirty years ago when he was keeper of Corsewall Lighhouse. One of the amazing people I have been fortunate to meet through this marvellous hobby of ours…

Thanks @GW4VPX Allan, was great to work you

Thanks @MM0EFI Fraser - the wx wasn’t too bad. It was quite nice to have a little rain and breeze on you, especially after a week of over 30 degrees in GW/MW

The video should be better resolution now, I uploaded it as SD not HD, hahaa.

Thank you very much for your kind words. It was a lovely Island with more buildings on than I thought. Unfortunately the path to the top was well over grown (non-existent), you could tell it hadn’t been used for some years.

Great trip and video Ben, would love to visit on day.

As Phil I also knew Donald Michael GM0KCY, really nice man and quite a career with Northern Lighthouse Board. On his last posting to Butt of Lewis he was active chasing IOTA and put out a great signal using a longwire antenna suspended from the top of the lighthouse!

I visited Donald a few times at Butt and operated IOTA contest 1998 from there, fairly easy to win the 24hr CW section from such a great site.

After the automation of Butt of Lewis in 1997 Donald remained there until 2003 or 2004, looking after the gear at Butt of Lewis which was telemetry hub for several other lights like North Rona & Cape Wrath. There was also a MF transmitter he looked after for D-GPS. He also did first line maintenance on 2G GSM base stations on Lewis, which I arranged and we were in regular contact at a work level also.

He was 65 when he retired to Girvan, he and his wife had owned a house there for many years. But he didn’t have much room for antennas in Girvan so was more or less QRT after that.

Thanks for the info Gavin, about Donald . I knew him for the year or so whilst I was living near to Corsewall Lighthouse in 1989 and 1990. I got a personal tour of Corsewall while he was there and also got to know his XYL. Good to get a little more of his history towards the end of his days.

Many thanks @GI0AZB Ian, it was great to work both yourself and @GI0AZA too! Hope the Raynet day went well for you.

Your very welcome for the video, I kept it short and sweet

the path to the castle was quite worn, but after that it had disappeared into fern and over grown greenery. Nevertheless, it was a great experience!

I’d love to say I’d go across again next year to help you out, but the 8 hours driving gets me, hi!

Look forward to working you soon and I hope the family were all ok.

It was like that 7 years ago Ben. Good till it turned straight uphill just a after the castle when it was armpit high greenery for about 25-50m. It improved after that. Sadly from there on I can’t remember just how good it was. Or wasn’t. Nice to see the old Lister is still in the shed.

Thank you very much @G4OBK Phil. I really enjoyed the adventure, it was also nice to see a little rain and dampness. The temperatures in GW/MW have been pretty humid over the past few weeks!

Yes, the boot looked like it had been there for some time. It hadn’t moved for some years, lets say that! It could of belonged to your friend Donald or maybe even someone working on the railway?? There looked to be so much history on the Island, and a lot has been left there.

The lighthouse has been kept in good shape, we could see it lit up from our hotel the night before

it was glowing rather bright.

Look forward to our next qso soon!

Thanks for putting the video up Ben, I was really chuffed to get the chase.

Thanks Ben, really enjoyed your video and seeing your kit set-up. Well done. Tell me what was this island used for in the past? Does anyone live there?

Tell me what was this island used for in the past?

Producing the natural mineral to make Curling Stones Geoff. But this sassenach with Irish blood is not the bst person to write about it. Jack Hood @GM4COX is the man with the knowledge.

You’re right Scotland is a long way away - I sometimes wish we’d mixed more of the GM summits in instead of concentrating on G and GW. A downside of having a fetish for Uniques

All fine with the family thanks, hope to catch you soon