An After work Munro

I’d been working since 5am. A 1pm escape from Aberdeen into a breezy and overcast afternoon didn’t fill me with joy. Neither did the clouds blanking out the summits of Morven and Mount Keen on my drive west towards Glenshee. However, todays aim was to test my new radio on a hill. It would be a good test due to every number concerning the sun and likely band conditions being on the slide compared to a couple of weeks back.

Anyway, the weather looked to be improving as I travelled west. By the time I’d parked the car at the layby (NO138 831) on the east side A93, it was rather fine. An Socach is well hidden from the road. It’s a big lump of a hill, with a really long whale-back ridge. I love it for its views.

This was a 9-10 mile round trip. It has a decent Land Rover track for the first couple of miles. Not worth taking a bike for a day trip, but well worth it to save time on an afternoon jaunt.

Taking the bike through the full height “kissing gate” wasn’t the best start to the afternoon. However, I wriggled through, got pedalling and fifteen minutes later stopped. I was at the second water crossing and this was where the hill track headed west up the shoulder of An Socach.

Good progress was made up this, with nice views opening all around. I was on a mission, so most of my photos were taken on the way back down. There is a false summit of epic proportions half way up. It has a nice cairn and a view back down the glen. 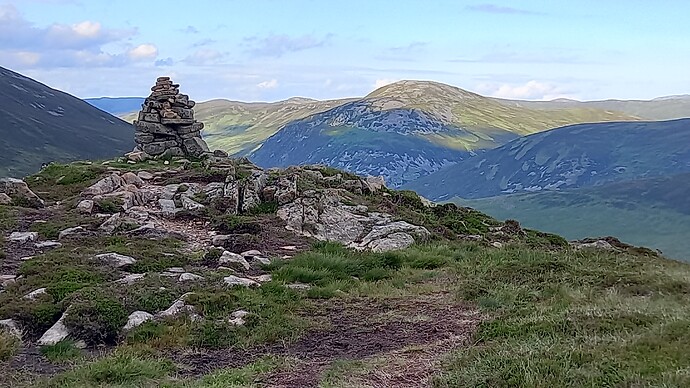 The way to the plateau ridge was now clear 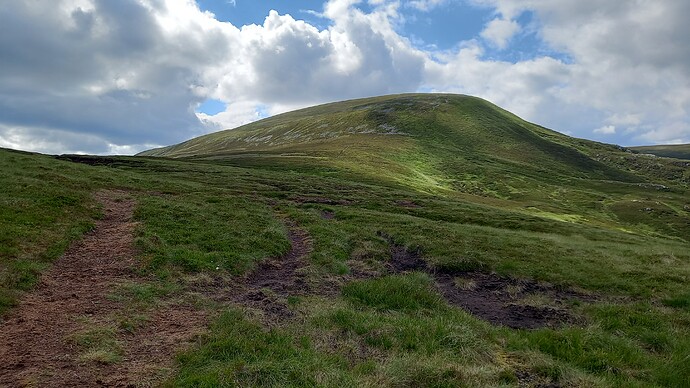 Gaining the ridge and passing over a Munro top, it was soon apparent that my memory of this hill didn’t include the very, very long walk to the summit at the extreme west end of the ridge. It was just over 2km, but included everything from grass, stony path to quartz boulders.

The summit gained, I decided not to be a hero and set up station at the shelter. There was an east wind blowing and every shelter in Scotland is set up to shield from the prevalent south-easterlies. It was also rocky as hell. 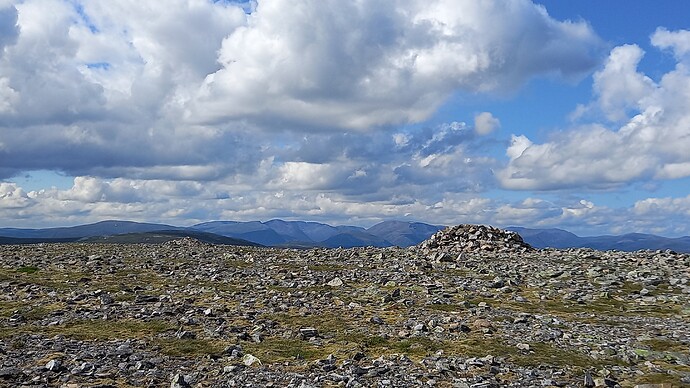 I’d spotted a grassy rake 100m away from the true summit, on the south side, so set up home there, out of the breeze, in comfort and with some grass to guy my ropes with.

The dipole went up, I tuned the radio to 7.0875 Mhz SSB and was faced with S5 noise. I knew this was going to be tricky! The 4G spot went off ok and I called CQ.

I worked @EA2DT and @F4WBN. Manuel was a struggle, but Chris less so. However the fading was so deep that after a few more CQ calls, I decided to give up with 40m and move to 20m. (I’d chosen 40m despite the risk as I wanted to let some UK Chasers work me with the shorter hop.)

20m was a lot quieter and I wasn’t really sure that the band was open, although tuning around, I could hear a few other stations. Probably the Megawatt guys, I thought.

A 4G spot was sent. Calling on 14.280MHz produced a contact with @EA7GV fairly soon, along with a 5/2 report. Then nothing. I listened for a while and even resorted to calling CQ on my 2m HT, on the off chance. I needed that fourth contact!

Ten minutes later, I heard, “Any SOTA?”. It was @EA1DHB - we exchanged callsigns and reports, mine being 5/4. I worked OH3GZ immediately after, with 4/4 off the side of the inverted V.

And that was the end of that.

The views on the descent were not bad, despite the overcast sky. 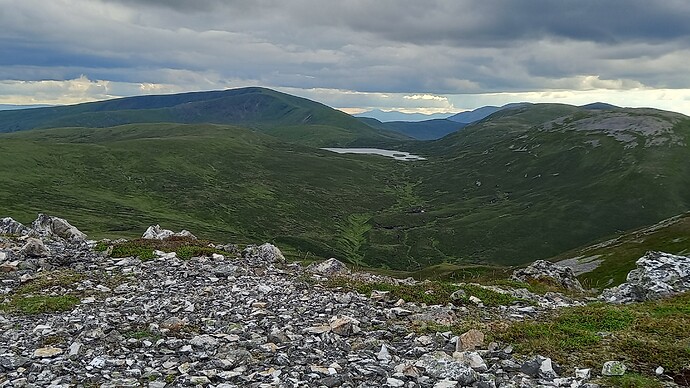 Pretty soon I was back at the bike and it took me all of 10 minutes to ride back to the roadside. Hardly worth it? It saved me at least an hour off the trip. 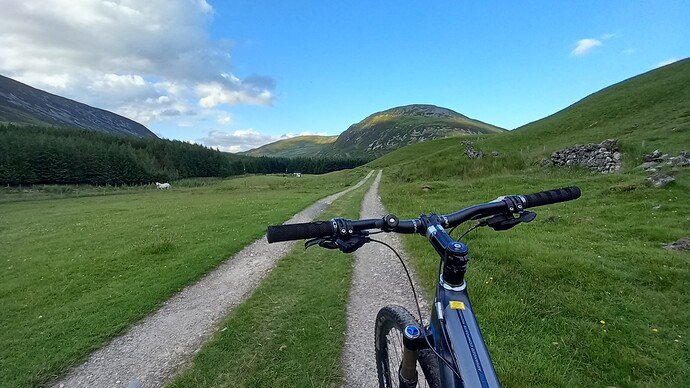 A lovely afternoon out, easy hill to climb. Awful conditions on the bands, but the new radio worked really well, pulling weak signals from the noise. I received similar signal reports to the the FT-857d, despite running 10 watts instead of 25 watts. 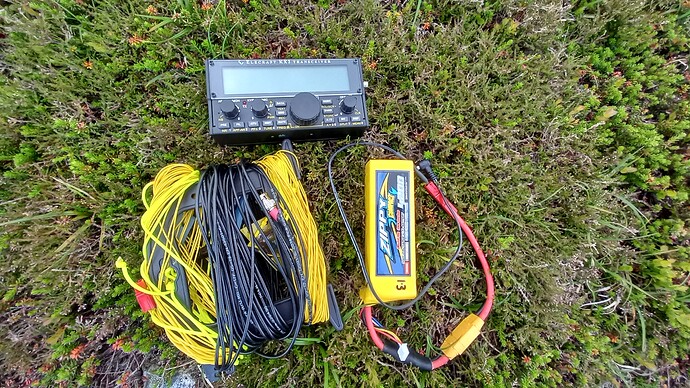 I may as well get a SOTA tattoo now. I’m here for the long run.

PS No movie, but it was filmed and I may do something different with this one.

Congrats, Fraser, for the new toy!
After being working since 5AM, what the heck! That’s what money is for! Well done and enjoy!
Thanks for this nice written report with pics.
73,

I also went for a new toy (KX2) this year after blaming the weight of my pack for my ascent times - The KX2 has had a substancial impact on my bank balance and a small impact on the rucksack! I bravely took it to pieces whan it arrived to fit side panels - I went for the Side KX version with the heatsink and I’m a bit more confident about putting it in a rucksack without incident! After managing to get the Hobby King LiFe battery I also in the end went for the internal battery - or at least the Ansmann equivalent to get the weight down more. Probably a diet would have been much more effective and cheaper… Thanks for the reports, I almost always end up finding the summit on the map and retracing your route, doubling the time allocated and putting on the extended to do list. I might be able to persuade the management that a holiday cottage in the Cairngorms would be worthwhile. Also impressed with the Landy - mine went last year - too much tin worm and whilst at a push I can fit side panels to a KX2 I can’t weld…
73 Paul

Nice one Frazer…Sorry I couldn’t contact you today but conditions down here were really bad.;…Maybe next time , until then stay safe. Best 73

the very, very long walk to the summit at the extreme west end of the ridge.

It never seems to end that walk along the ridge. Especially as getting to the ridge isn’t that hard.

An Socach is a favourite of mine, easy walk up the Glen then the lovely long ridge. As you say its just far enough to justify the bike, although I have only ever walked.

Great on the KX2, sure you will enjoy it. Mine has given good service and no issues, expensive but do hold their resale value which helps the justification!

It is not a problem the banks now do not give money.
Good rig, I also have one, very happy with it. Thanks for the qso
73 de José ea7gv

Thanks for the qso

Thank you Jose! I didn’t think I was getting the four contacts yesterday. . .

I notice you’ve used your bike a few times on tracks to the hills. Its not something I’ve done. However I can see it beats footslogging along the glens and for those loooong approaches makes it so much more accessable without pre-dawn approaches.

I think I may just give it a go sometimes. So thanks for the inspiration.

Hi David, The Cairngorms are particularly suited to cycle approaches due to the long approaches up the reasonably level glens. Sometimes it’s a bit of a slog on the way up but it’s an amazing feeling on the way back! Two hours walking time done in fifteen or twenty minutes on the bike.

I finally did something - a little different - with the footage I shot on An Socach. 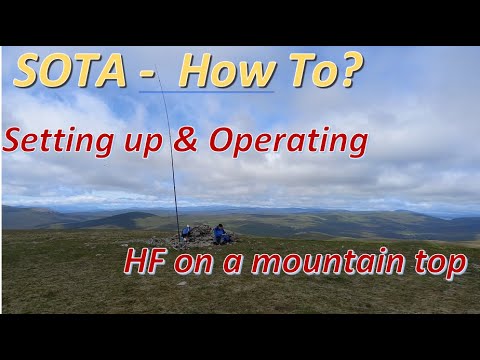 Hi Fraser, another great video and with your new rig

I hope you are very happy with it.

I hope you are very happy with it.

Yes Geoff, Very happy with it. It is a quality bit of kit. Takes a bit of getting used to and there are a few features not in the manual. I somehow managed to get it transmitting on the opposite sideband and it took me an age to work out how to reverse that!