Snowshoeing in the Cairngorms - GM/ES-049 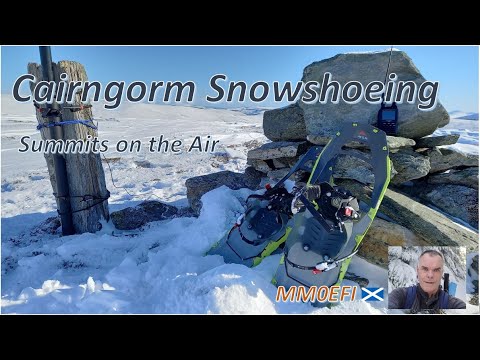 Friday 18th February 2022
A massive dump of snow over Aberdeenshire. The avalanche forecast for Saturday was severe, but it was to be a fine crisp day with blue skies.

Saturday 19th February
A hastily re-aligned schedule and I suddenly found myself with a day off! Due to the aforementioned avalanche risk and the fact that the snow gates were closed on all three roads leading out of Deeside, I decided to stay local and climb something smaller and safer, hence Ladylea Hill - the subject of a recent climb by me, where I got slightly lost…

The short drive over to Strathdon and then Glen Buchet was straightforward, if slow, due to the snowy roads. The Land Rover had fun getting into the parking space thanks to snowplough debris. I made sure I drove round a few times, just to make sure I’d get out again. 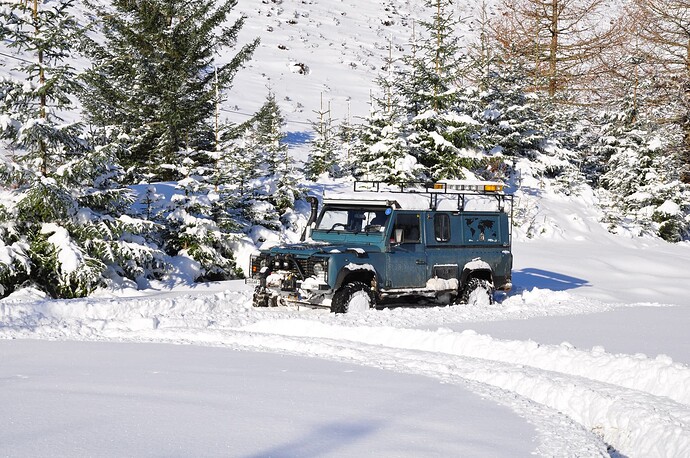 I jumped out straight into 18"(45cm) of powder, strapped on the snow shoes and set of up the 1.4m (2.3km) hike. This was initially up a Land Rover track through the forest plantation and eventually across new plantings and finally open slopes.

It took around 1 hour 40 minutes due to the snow and also the fact that I was carrying my usual pack, a drone plus three batteries and my Nikon D90 DSLR. Mercifully, the upper slopes were already wind scoured, making walking much easier. 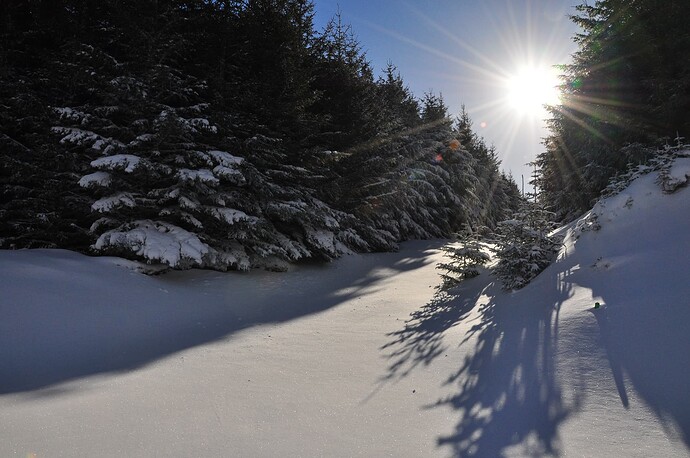 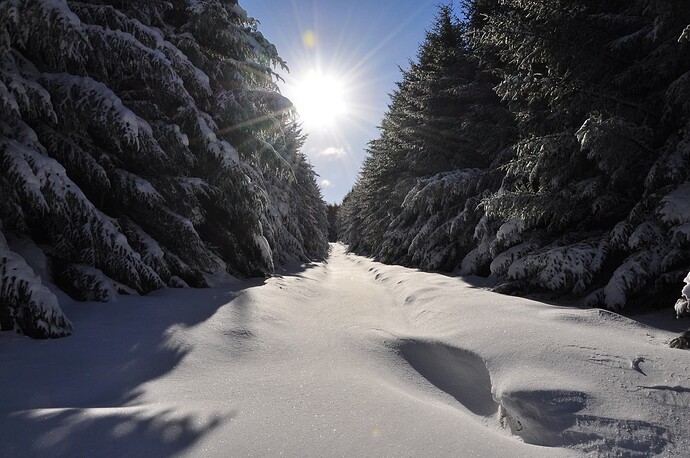 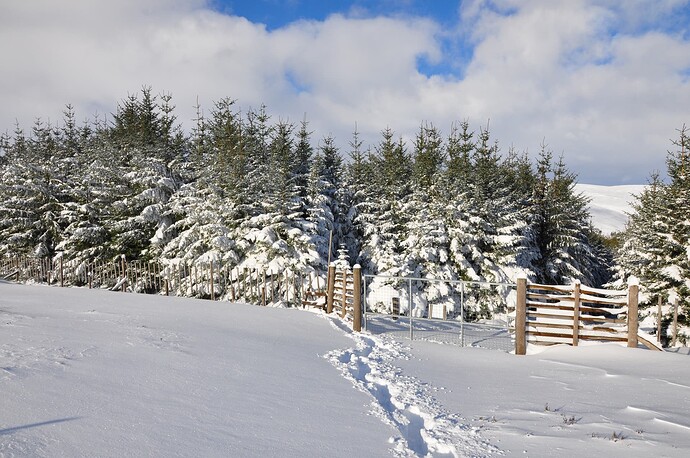 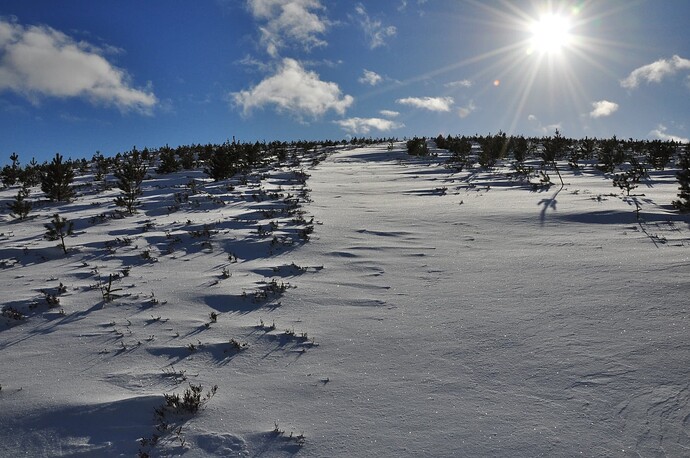 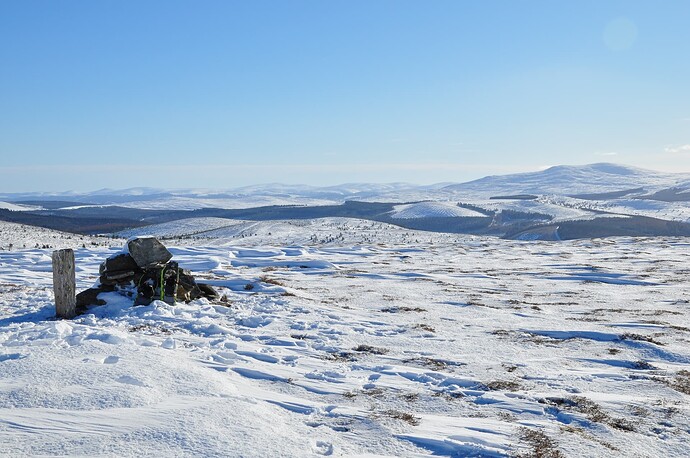 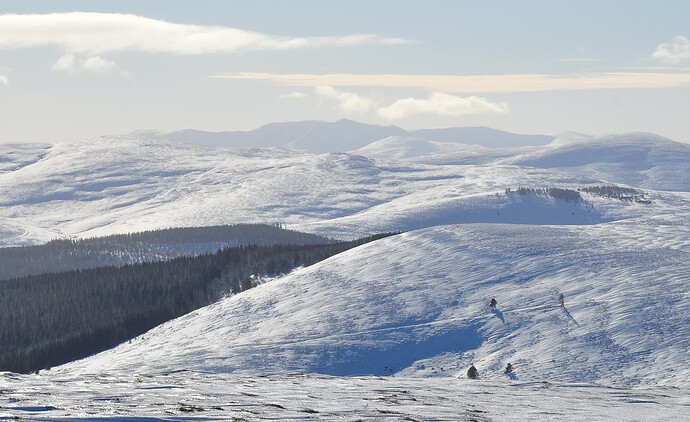 Activating Ladylea Hill
Thanks to a handy post next to the cairn and my remembering to carry some bungee cords (a product of the Devils hand), it made sense to use my linked 40/20m inverted V, with the 7m mast strapped to the post. 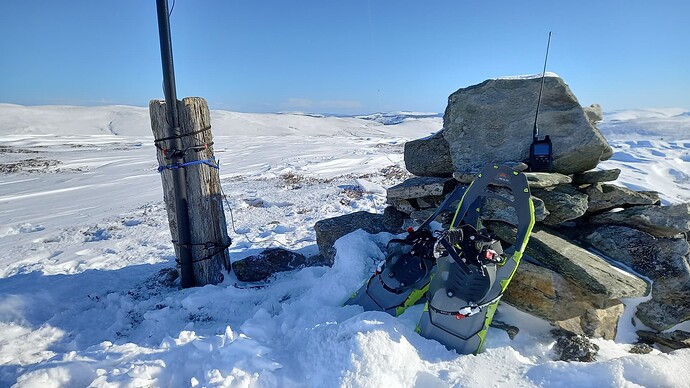 1200z saw me on the air, pushing 10 watts of lovely SSB out of the KX2 on 14MHz. I chose 20m due to some non-scientific feelings about sunspots, K-index and mainly wanting to avoid a weekend stress-out on 40m. 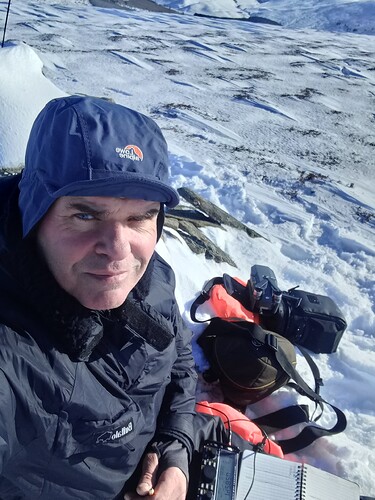 I had a great time for around 20 minutes, working 17 stations in 8 countries, with ODX being NX4TT in Florida, 4150m (6680km).Then someone started talking just off my frequency, so I paused, had a retune and spotted again. I pulled in a further 10 stations.

There was some QSB, but at other times the band was wide open. I got a 5/7 from NX4TT and when I was working HB9CYV on his summit HB-TG-008, I could clearly hear his long path echo, which was novel. (Or so I think, as I’m not an expert in such things.)

I called it a day at 1235, as it was rather cold. Mo had just messaged me to say she was taking a 4 mile walk to a cafe in Tarland and that I could met her there. Better get my skates on…sorry snowshoes.

The snow looked even more delightful in the afternoon sun, plus it was a hell of a lot easier on the way down. 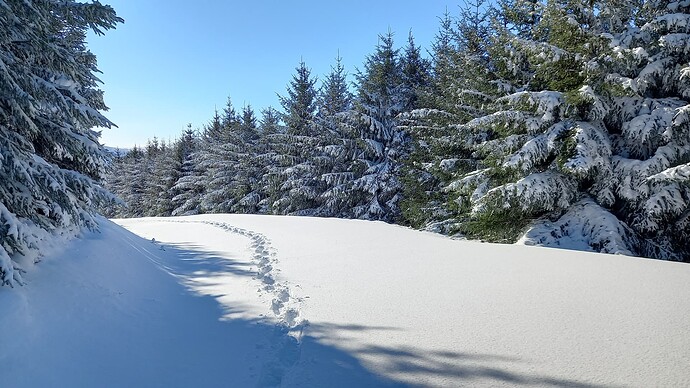 I extracted the Land Rover without any problem and somehow managed to make the drive over to Tarland on time, parking outside the cafe just as Mo was walking in the door! (Brownie Points earned

Addendum
Mo asked if we could go and see some standing stones (Tomnaverie Stone Circle) that she’d seen on Google maps. they were only a mile from the village. It turned into a nice wee outing, just a short walk up a track, and some cracking views. Oh, and it has a nuclear bunker next to it! The stone circle dates to 2500BC, Bronze age. 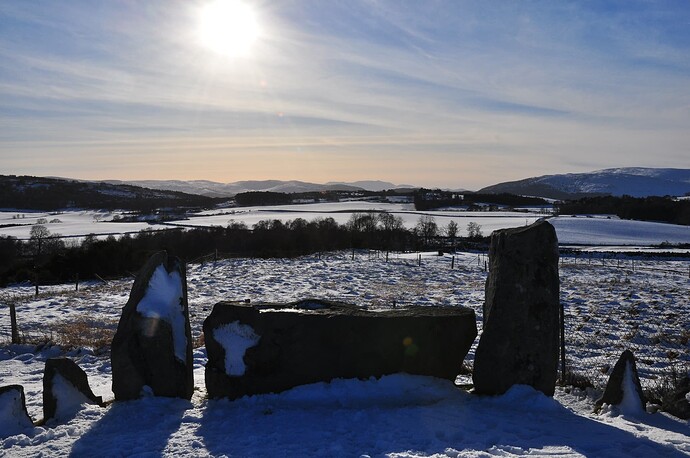 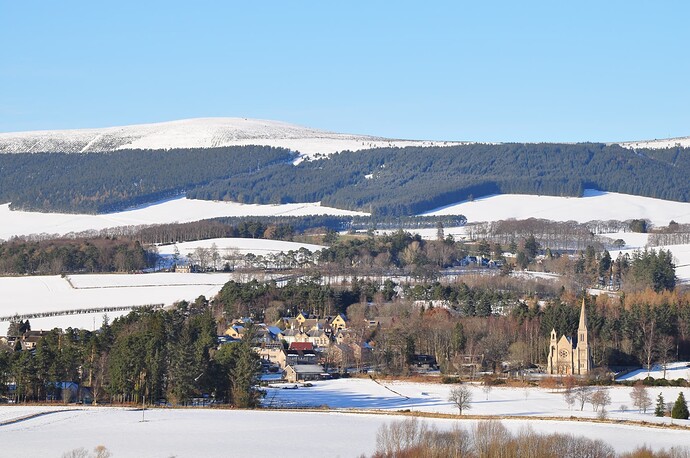 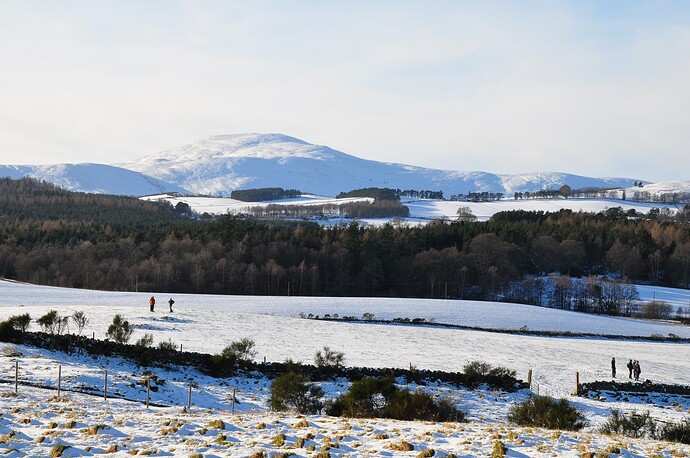 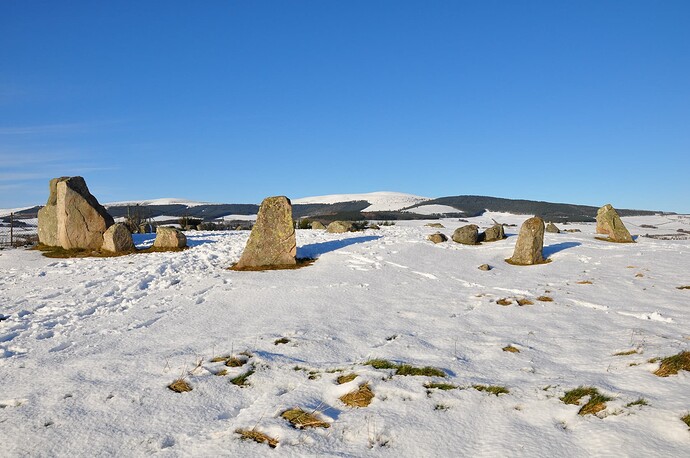 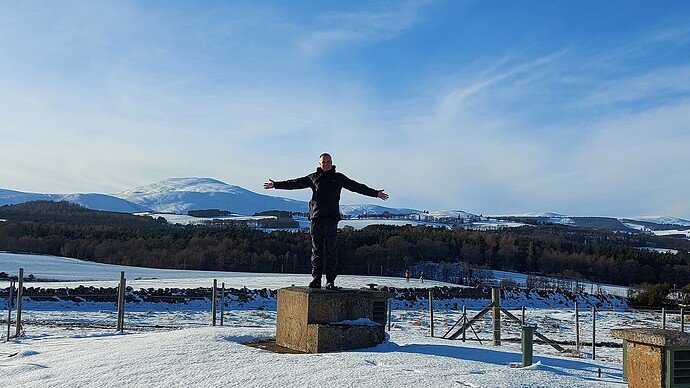 It’s amazing what lies undiscovered on ones own doorstep!

Anyway, a grand day out in all respects. Thanks for reading.

cracking photos and video footage! I’m never close to the radio when your on summit, but will try and get in your log soon! Or maybe even a S2S, I am out this Friday and Saturday in GW land.

I am out this Friday

That is a possibility!

So I’d love some snowshoe advice from those that have been there before. Snowshoes have been on my wishlist for almost 10 years now. but the issue is this:

So does everyone really carry snowshoes with built in crampons AND real crampons? Or can you get snowshoes that fit with your existing crampons on? Or snowshoes+crampon combos where the snowshoe bit is removable (leaving the crampon) for climbing the steep stuff?

Wonderful photos by the way … you’ve got me dreaming of winter here, whilst sweltering …

So does everyone really carry snowshoes with built in crampons AND real crampons?

Matt, I can only speak for Scottish conditions.

For powder and a prolonged cold spell, snow shoes are the way to go. Mine are MSR and have serated edges, a serrated cross bar and a couple of crampon like points below the foot bed. However, all of this is thin steel and only really suitable for open slopes. There is a bail wire under the heel that can be lifted and this changes the foot angle for going up hills, easing the calf muscles.

Traditional Scottish winter is a dump of snow and then repeated freeze-thaw cycles, rendering the snow firm and icy (nevé). The snowshoes still grip on this, however crampons would be needed for the steeper stuff.

I’m in the Eastern Highlands, where the Cairngorms are more suitable for snowshoes (flat tops, can be prolonged sub-zero temps). Next week, we are heading over to the West Highlands and we’ll be taking our crampons. (Steeper, rockier snd more freeze/thaw.)

I wouldn’t carry both, although I watched a presentation last night by a guy who hiked the 250 mile Cape Wrath Trail in winter. He carried both initially, but dumped the snowshoes with a friend when the weather got milder.

Its a tough one. All i can say is do a bit of research on the terrain you’ll be on, the WX and make your best informed guess as to what to pack.

Oh, and it has a nuclear bunker next to it!

Hi Fraser, that’s one of the old Royal Observer Corps monitoring posts that were setup across the country on a grid. In the event of a nuclear war they would all be manned by obervers who would use the periscope to determine the bearing to the nuclear detonation, and then phone that bearing through to a regional command centre so that the strike position could be triangulated. Here’s a handy map of them all: Nuclear Monitoring Posts – Subterranea Britannica we’ve got one just up the road here.

You’re standing on the entrance hatch, the periscope would have been attached to the pipe in the middle and the other block is an air vent I believe.

Tarland is in the Howe of Cromar. Howe translates to “Hole”. Apt, as it’s surrounded by hills.

For the record, it’s well maintained, with fresh paint on the vents, hatch and recently greased padlocks.

Wow! Fantastic photos. Thanks for another great report. I quite often turn to your YouTube videos when I feel the need to be cheered up by some beautiful scenery. Great work as always.

cheered up by some beautiful scenery.

West Highlands next week, based in Glencoe, so hopefully grab some shots/video.

They built lots of them in all sorts of places. Purpose was to triangulate from the flashes when a ‘hot one’ went off.

Subterranea Britannica is a society devoted to the study and investigation of man-made (including Nuclear Bunkers) and man-used underground places.

I really mustn’t show this to Mo, or we’ll end up with another new hobby!

Hi Fraser, I’m intrigued by the idea of snowshoes. My last ice climb was fourty years ago (I gave it up when we started a family) and at that time they were virtually unheard of - I don’t remember ever seeing any in the climbing shops though one friend made some. Looking back there were a number of occasions when they would have been useful, for instance I remember abandoning a climb of the Crowberry Gully on the Buachaille due to powder snow avalanches and it had been a struggle in deep powder to get to the first pitch. Do they ball up like crampons if you hit a patch of the wrong snow?

I’m intrigued by the idea of snowshoes

Hi Brian, I’ve only used them for three seasons. I bought them for Mo and I after we had to abort an ascent of Bynack More, having completed most of the hike but being unable to cross a massive snowfield below the final summit slopes.

They certainly stop you “post-holing” on crusty snow. On powder they reduce but don’t always eliminate sinking. At the weekend, the snow was 18" deep. I was still going down around 10". The powder was so fine that when I dropped my camera lens cap, it went all the way down!

Last winter during lockdown, Mo and I wore them on every walk we did, there was so much snow at low levels. Eventually we went out on a hillside that had thigh deep powder where the snowshoes made no difference. We were just wading through it.

On one hill we followed guys with skis. The skis stayed on the surface more of the time than we did.

Do they ball up like crampons if you hit a patch of the wrong snow?

I’ve not experienced this and I don’t think they would.

As for climbing Crowberry Ridge, well I think I would just wade through the snow and put the crampons on at the bottom of the route. I can’t imagine any climbers carrying them.

Final thought. Worthwhile having in your armoury, along with crampons and skis.

Thanks, Fraser. At my age its theoretical now, but I like to know!

Nice job Fraser! To bad I missed you on the summit. Perhaps next time.
Cheers,
fred

1200utc was probably a bit early for you Fred!

Thats a great link there Jonathan, thanks for posting

Another great report there Fraser and thanks for the extra info, that lead to Jonathans link to the Buckers, very interesting. Could see a ‘Buckers on the air’ coming soon lol
But fair play to Mo for walking 4 miles to the cafe after her op, the cakes there must be next level!

Hi Fraser, I’m intrigued by the idea of snowshoes.

I have found mine extremely useful, even though I only bought them a month ago. Modern snowshoes have a kind of crampon on the underside, so they provide excellent traction not just in snow, but on ice and névé as well. I used mine yesterday on Großer Pfaff (OE/ST-222) in the afternoon and I wished I’d used them in the morning on Stuhleck (OE/ST-171). If the snow is very claggy, it can start to stick to them, but it’s nowhere near as bad as with crampons. If you shake your foot a bit it all flies off. As I was decending the Großer Pfaff, I found a snowshoe bag half buried in the snow with no footprints around it. Inside there was a pair of gaiters and two bungee cords. I took it off the mountain and called it my litter collection for the day (plus finders fee). My snowshoes now have a convenient carry bag. I would look for a light pair, the one’s with alloy tube round the outside are a bit heavy.
73 de OE6FEG
Matt