Many thanks go to all the chasers yesterday (Jan 18th 2022) when I activated GD/GD-001 on 40m CW. There were 58 of you, which is amazing. That is my highest number of QSOs in an activation so far.

Low cloud meant that I couldn’t see any view from the top whatsoever. Even the summit buildings and comms towers on Snaefell only came into sight when I was right on top of them. The Isle of Man is well known for how its mountains are often shrouded by cloud.

I parked in the road layby at a place called Bungalow (54.2515°, -4.4630°). There is a path from there right up to the summit. Using the OS Maps app on my iPhone, I navigated the path in poor visibility and reached the summit in 25 mins.

Early morning activations seem to me, to attract the most chasers. Here in the west of Europe, there are many DXCC entities available with single hop 40m propagation. On a week day, I am surmising that many European amateurs are in their shacks after breakfast, checking the bands and chasing any SOTA spots that appear. In comparison, I have noticed that afternoon activations produce a lower number of QSOs. Yesterday morning’s chaser count though really surprised me. Perhaps it was the 8+3(bonus) point for GD/GD-001 that was the attraction

My SOTA transceiver is an Elecraft KX3 and I use a 40/30/20m linked dipole. Having read many threads about battery recommendations for SOTA, I can share that I use a simple light-weight 4S Li-ion battery pack. I have a series ‘patch cable’ with an 1N5001 3amp diode to drop a fully charged battery pack by 0.6V. The KX3 is completely happy with this. The series diode patch cable could be removed when the battery pack voltage drops, but I have never had to do this to date. My activations are typically no more than a half-hour, although yesterday I was on-air from Snaefell for just shy of an hour, sheltering from the winds under my tarp. Still plenty of battery capacity at the end of my activation. 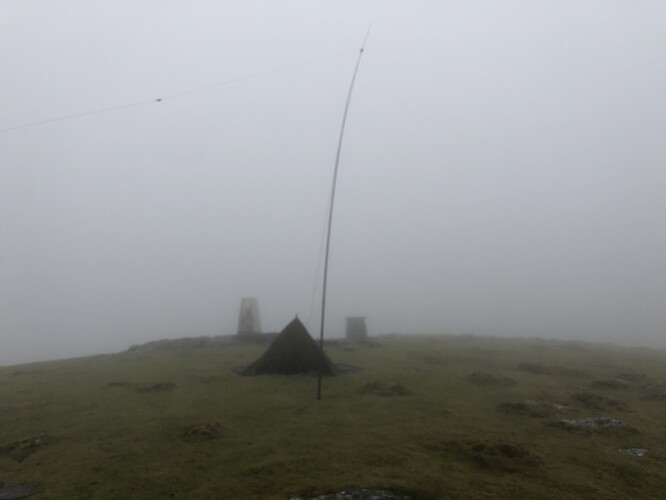 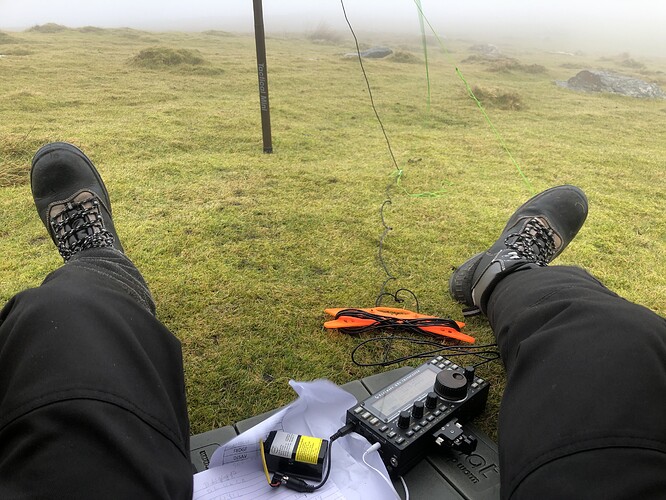 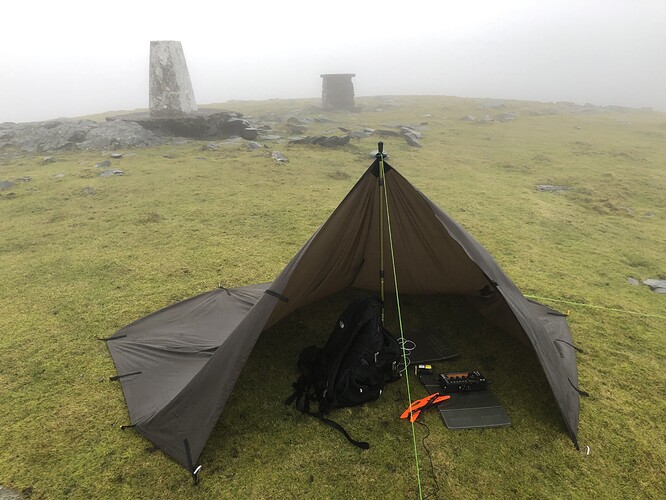 Thanks for chasing.
Best 73
Carl G0KPE

Hi Carl,
Thanks for the report. Looks like they cut the grass especially for your visit.
Yes all island mountains attract the clag. Have fun, you sound to be succeeding and getting good results.
I started off on 40 m CW but I now often operate on 30m, more variety and no contests. You might want to give it a try.

No bonus for the chasers though.

sheltering from the winds under my tarp

What tarp is that? I’m looking for a replacement for my old fishing shelter and that looks good.

Its a DD Hammocks Tarp S measuring 2.8m x 1.5m.
Available in two colours and in two weights - standard and ‘superlight’. I have the standard version, which weighs 450g.
It’s described as a ‘day shelter’. It’s my opinion that the more usual 3m x 3m tarp size is too big and cumbersome for SOTA and this smaller size is a very good solution.

Many thanks for the QSO. I tend to be in my shack in the mornings as afternoons are taken up with dog walking.

I’m also doing more CW chasing these days as the queues tend to be shorter than on SSB activations.

Hi Carl,
Thank you for the report and the activation.
The summit you activated was the 2nd GD summit I was able to get into my log.
I chased you with 5W QRP and a 3m long whip antenne from JO21GH
Vy 73
Patrick ON4BCA

Many thanks for the report and photos Carl. I was very pleased to work you, I’m fairly sure for the first time. 58 in an hour is an excellent achievement.

Thanks for a nice report on Snaefell Carl - the second activation in a week. This was a text book activation and you made the most of HF - great stuff! Also like the tarp. I never used one but if I ever do I would likely buy that model. Very good to have in winter, if ones stays is longer than the usual half hour…

PS Does your tarp rely on a walking pole as the centre support?

It’s my opinion that the more usual 3m x 3m tarp size is too big and cumbersome for SOTA and this smaller size is a very good solution.

I can’t decide which size tarp to get. 3m x 3m seems more versatile but yours is obviously lighter to carry.

Does your tarp rely on a walking pole as the centre support?

Does your tarp rely on a walking pole as the centre support?

Thanks for the activation, the QSO and the report with pictures.
You were my one and only SOTA chase of the day yesterday.
73,

Guru
P.D. I’d suscribe David’s suggestion to give 30m a try, I guess I’d have copied you with a better signal than on the 40m band, where I often struggle to hear European activators and only CT, EA and some F are mostly heard with good signals here.

Thanks for all the messages.
Regarding best tarp size for SOTA activations, I have a 3m x 3m one bought previously, and also my new 2.8m x 1.5m one. The latter is absolutely fine for shelter from the wind and rain showers. It is much lighter than the 3m x 3m tarp, which is now surplus to requirements.

Yesterday it was quite breezy on top of Snaefell. It was tricky enough to get my 2.8m x 1.5m tarp shelter pegged into place. The bigger 3m x 3m would have been really awkward.
There are lots of interesting YouTube tarp shelter videos to learn from. A walking pole with a guy line is the standard arrangement for holding your shelter up.

I do indeed use 30m too, especially activations later in the day. Early morning I prefer 40m but 30m is a great band especially for weekend SOTA, i.e, no contest WRM

… I have one - it is too big for a day shelter - usually end up only using half!