This morning I was brewing beer so I wasn’t sure if I’d have chance to get out today. The brew went well and I was all cleaned up by about 1130 so I decided to activate my second nearest summit Sharp Haw G/NP-029 for one point (no winter bonus, boo hoo). I set the alert, found my gear, made a flask of tea and was off and soon parked up on the appropriately name Bog Lane.

Colin @M1BUU had suggested to me that wellies would be a good idea but I don’t like walking in them so stuck to my usual walking boots and gaiters. It wasn’t too bad. There were plenty of boggy bits to cross but with two walking poles and long legs it wasn’t so bad. The wind was stronger than I expected though. 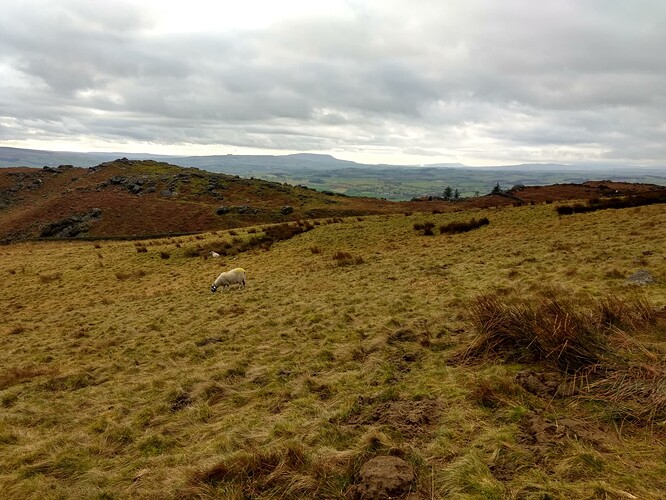 I set up the tarp in the usual activating dip which was definitely needed as the wind was quite stiff. For such a low hill it always seems to be windy. I put up the EFHW and managed 16 QSOs on 40m CW. On 20m CW Manuel @EA2DT was first in the log as usual. There was now quite a pile up and it was very hard to make out callsigns. Along with 3 Stateside stations I made 25 contacts on the band. This was quite surprising since part way through my pole partially collapsed and the wire was mostly just lying on the ground! Perhaps if it had stayed in the air I would have made a few more.

I was getting a bit cold so it was time to replace the EFHW with the 2m slimjim. FM gave me 9 QSOs mostly local but did include Phil @G4OBK who I was struggling to hear. I gave him 33 and received 43. I think he was telling me he was using a reasonable amount of power and a beam but I think he may have been horizontally polarised which wouldn’t have helped. At the end there was another station trying to call me but he was too weak. 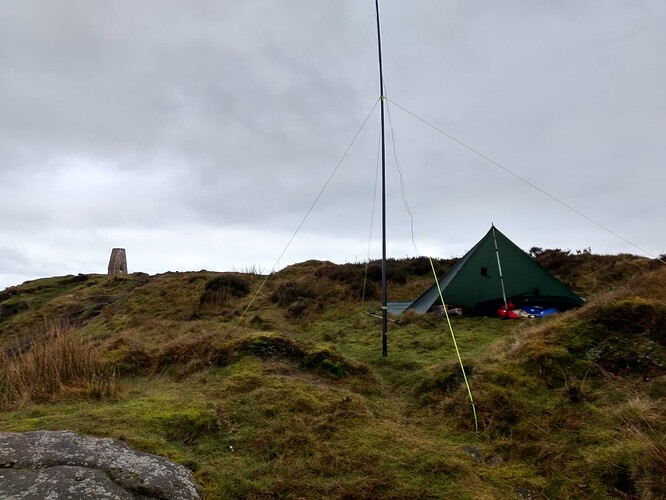 Instead of returning the way I came I carried on along the top and followed the path to the left that enters the woodland. It goes through some cleared forestry and meets the track from Flasby. There’s a very nice bench here and it was a great sheltered spot for some more tea and a Kitkat before carrying on to the car. Last time I used this route I went a bit wrong but I managed to find the right path across fields and it’s a nice route. There were still a few boggy spots but it was probably better than the way up, although longer.

I first activated Sharp Haw in 2018 and struggled to get 4 QSOs so today’s 50 was a nice surprise and is my highest ever total for an activation. Not bad for the lowest summit in G/NP. Thanks again to all the chasers.

Morning Richard,
No I was vertically polarised, couldn’t hear a thing horizontal. I was running 150 watts and 7 elements vertical, so compared to how I heard you at 4 by 3 I was surprised I got such a low level signal report of 3 by 3, but at least I got the QSO. Only one of two QSOs yesterday as I was out most of the day.

The signal report is totally subjective so it doesn’t have any great accuracy. The problem is that my rig is a Baofeng (but connected to a slimjim) so the receiver is clearly not great. If you don’t fully open the squelch I have to press the Monitor button but that is really difficult to press and turns the torch on! And if there was a mast on the summit I would probably hear nothing.

I do have an FT817 but since I now use my homebrew rig for HF I don’t want to carry that as well. I need to get a new handheld but it seems all the ones with a good frontend are discontinued now. I notice from my activation report in September 2018 that I heard you 55 but you couldn’t hear me well enough for a QSO. That would have been with my FT817 and a comparable antenna so, unless your station has changed a lot since then, it shows how much better the Yaesu is compared to the Baofeng.

Anyway, thanks for the QSO Phil.

Thanks for the info Richard. 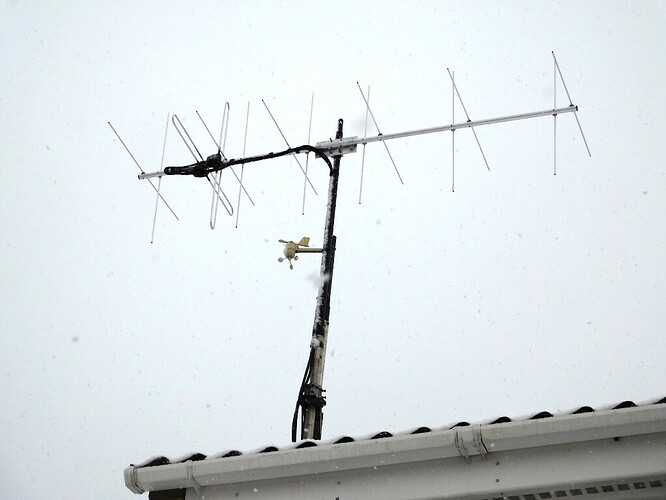 I was using a slimjim in 2018 but not the same one as yesterday. It occurs to me that I now use RG174 instead of RG58 because it is so much easier to wind up and carry. Even at 145MHz the difference in attenuation over a few metres can’t be that great though.

Great activation Richard - thanks for the report and photos. I will try to learn something since you made 5 times as many contacts as I did a couple of weeks ago on G/NP-31! The EFHW - is it single band or trapped?

Hi Robin
The EFHW is a single wire cut for 40m (i.e. approx 20m long) but it is also resonant on harmonics so it also works on 20m and ought to work on 15m. This is one advantage of an EFHW over a dipole as they are only resonant on odd harmonics.
I was surprised how many contacts I made. It was later in the day than recently so that may have made a difference but I think there has been some geomagnetic activity so perhaps that helped.
Richard

It occurs to me that I now use RG174 instead of RG58 because it is so much easier to wind up and carry. Even at 145MHz the difference in attenuation over a few metres can’t be that great though.

With a ‘rough and ready’ comparison of RG174 to RG58 at the club a while back we came to the conclusion there wasn’t a lot in it.