Upside down weather and a travesty of midges

Tuesday was our rest day and also transit from the Loch Laggan area up to the North West. After a spot of shopping in Inverness (new rucksack purchased) we stopped off at the North Kessock car parking area, laid our blanket on the grass and spent half an hour pouring over the Scottish Mountaineering Club “The Munros”.

Mo picked these ones - Sgùrr Breac and A’ Chailleach: The Western Fannichs. I plugged the start point into Google maps and we were there in an hour. 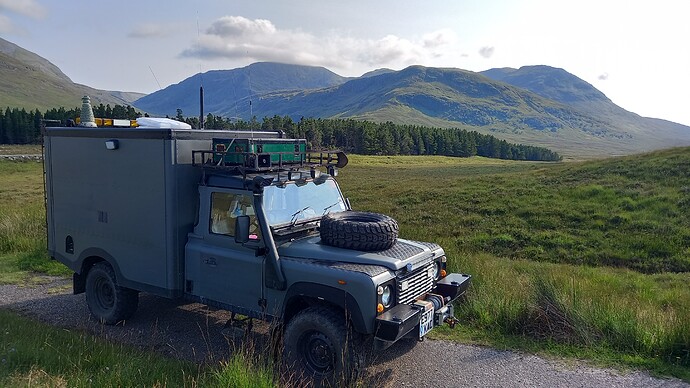 There were one or two midges around but it was otherwise a pleasant afternoon. Roll on two hours and Dora was surrounded by a cloud of midges like I’d never seen. We had the doors and windows shut, but they were coming in the vents, door seals, everywhere! It really was impossible to keep them out. In the end we put the bed up at 8pm just to try and present less flesh to the midges.

6am (0500z) alarm. The midges were as bad - both inside and out. After we’d eaten and geared up, I went outside to grab the bags and poles from the boot. Within seconds they had covered every inch of my skin and clothing. Thankfully, when we moved away from the Land Rover and walked down the road a bit, they thinned out. The cloud was down at road level, with a promising forecast of sun later on. It was 0646z

We’d decided to walk these hills using the Druin Rèidh ridge, which is the bit in the middle of the first photograph. It seemed an improbable way up, with a steep craggy nose, however we easily found a path which threaded its way up through the crags. Visibility was really poor. 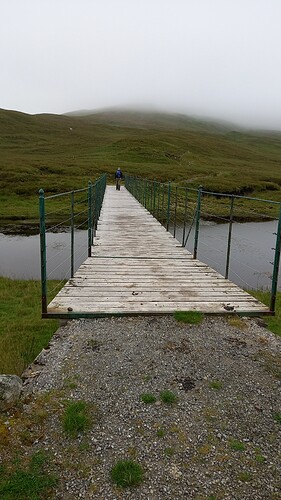 After a couple of really steep sections the ridge levelled out into the section with peat hags. Again, a path threaded its way through these, gently rising all the while. 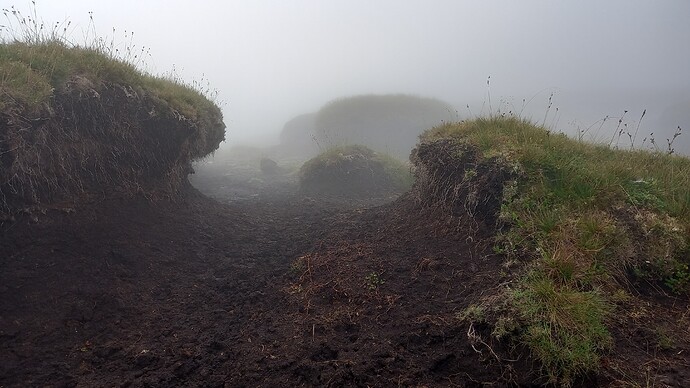 As we climbed this section, I became aware of a warm feeling and saw a faint ball in the eastern sky. Within a few moments the sun had burned through, there were blue skies above and we were treated to an amazing inversion all round. 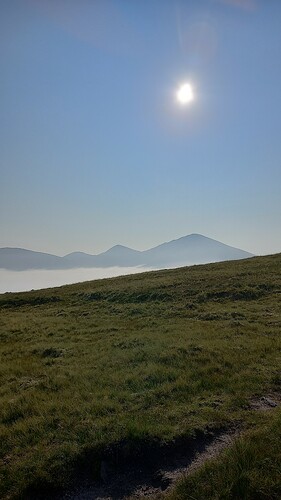 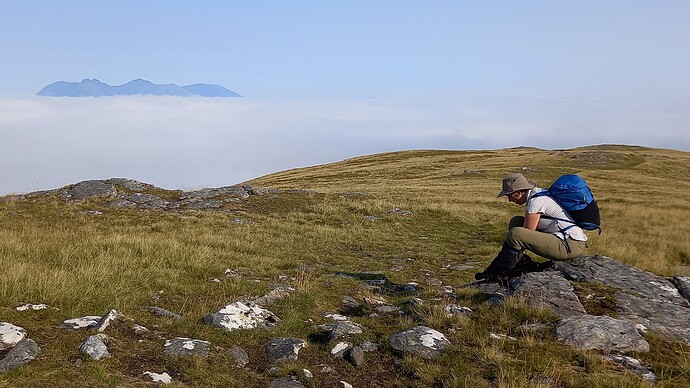 It was pleasant walking all the way up the now grassy and narrowing ridge which led to Toman Còinnich, a subsidiary top and a T junction. Drop left and climb up to Sgùrr Breac, return and drop right to then ascend A’ Chailleach. 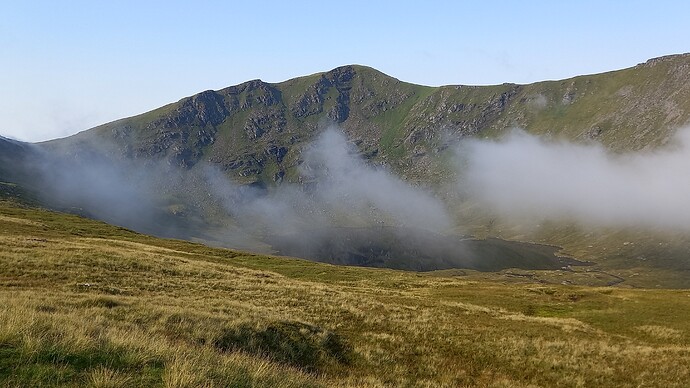 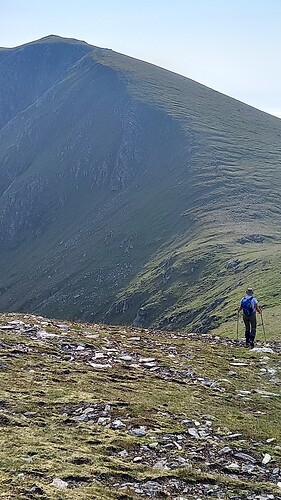 Ascending easy stony slopes on bits and pieces of path, we summited onto a grassy top at 0945z, a time of 3 hours for the climb. 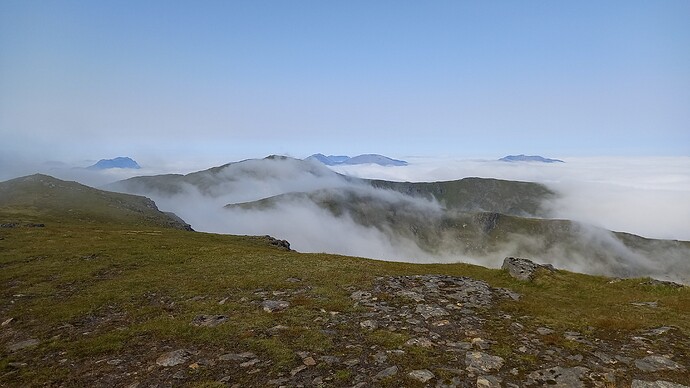 I had the station up and running in 10 minutes - Elecraft KX2, inverted V, 7m pole. Band conditions on 40m were forecast to be “Fair” and 20m “Poor”, so I spotted myself using 4G and put out a CQ call.

There was a bit of a pile up. Probably due to the lack of activations of this summit. Just 4 activations and none since 2013. In 20 minutes I had 23 stations in the log, with decent signal reports all round and little evidence of QSB. Only QRM to deal with! Highlights were GW4TQE/p from GW/MW-013 and IK2LEY, who was weak but perfectly workable.

We were packed up and on our way by 1030z. Back down to the col, skirting around the south side of Toman Còinnich to the next col and then ascending A’ Chailleach via an ever narrowing grassy ridge. 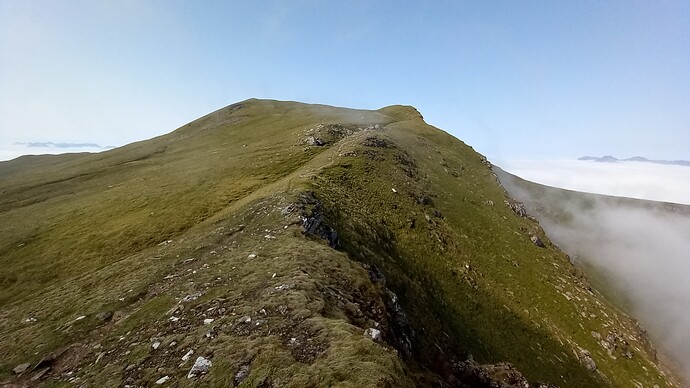 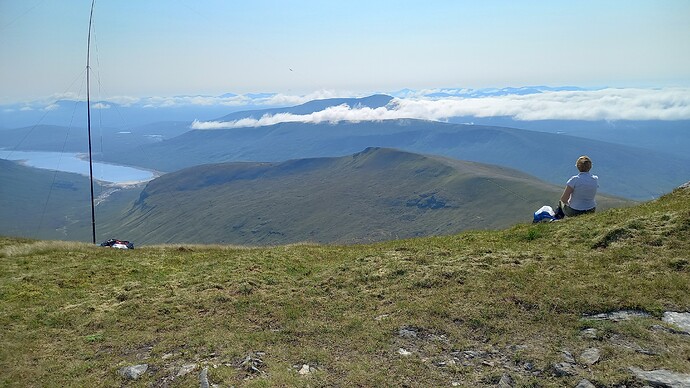 The log shows 12 contacts on 40m, with Italy, Spain, France in the log with a smattering of English station. Surprisingly GM6ZAK/p made it in, just workable and no more. A S2S with GW4VPX/p from GW/NW-031 made it two Welsh summits for the day.

I took out the 2m handheld and performed the usual CQ… and was surprised to be answered by GM0GAV Gavin, who had just reached his second summit of the day GM/WS-021 in the Grey Corries, so a bonus S2S for us both. We had a wee rag chew and then I had one more 2m contact - GM4OAS Gordon, down in Morar near Mallaig.

The descent route recommended by walkhighlands.co.uk and also in the SMMC guide looked ropey to say the least. Steep pathless grassy and rocky slopes followed by a trudge down a pathless glen and finally a walk along a muddy lochside track. The cloud started to fill the glen as we looked down at it. No thanks. 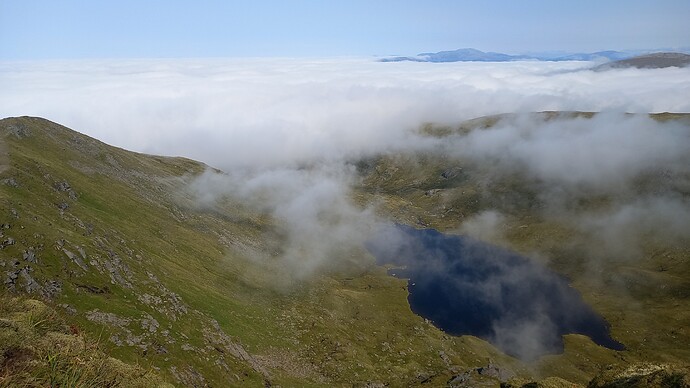 We ended up retracing our route of ascent, back up to the subsidiary top and returning down the ridge - in cloud again. Strangely the inversion inverted and we soon dropped out of the cloud and at least saw some views on the way down. 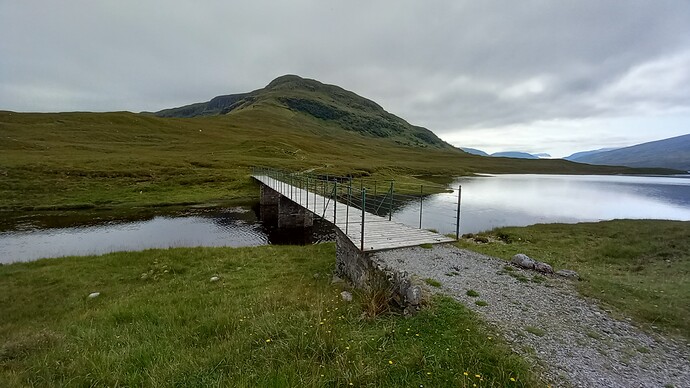 We arrived back at the car park at 1545z which made it an 8 hour round trip.

On returning to Dora, we couldn’t believe the mess inside. It was like a grenade filled with ground coffee had exploded. Dead dessicated midges everywhere, stuck to the window, ceiling, every surface and plenty of live ones hovering. We jumped in, drove 10 miles with all the windows opened and when we found a vacant layby (with a breeze), we spent the next hour emptying everything out and doing a massive clean up operation!

Hi Fraser, great report and photos. Tell me, when you talk of midges are they same as Mosquitos?

Geoff, Thankfully their bite is less harmful than a mozzie bite however they must outnumber mozzies 1000:1 when they get their act together. Usually there’s a few floating around most places, including where we live, in the East Highlands. Over towards the west coast however, they can be much worse, swarming in huge numbers, forming clouds.

Thankfully they can’t fly in even the slightest beeeze and for that reason the summits are often midge free.

The highland midge (scientific name: Culicoides impunctatus; Scots: Midgie; Scottish Gaelic: Meanbh-chuileag) is a species of small flying insect, found across the Palearctic (throughout the British Isles, Scandinavia, other regions of Northern Europe, Russia and Northern China) in upland and lowland areas (fens, bogs and marshes). In the north west of Scotland and northern Wales the highland midge is usually very prevalent from late spring to late summer. Female highland midges are well know

Thanks for that Fraser. I now have a clear idea of what you are talking about. Glad your got them over there; never seen them in VK3, properly to far away for them to travel here.

properly to far away for them to travel here

I suspect the midge is the sole reason for your country having extremely high level of checks on imports etc and fumigating everything that comes into the country.

Of course, you’ve got much nastier things trying to eat you in Oz, so I shouldn’t complain!

Hi Allan, Great to work you again. I’m sure that’s a few S2S now? I hope that you too had an enjoyable activation!

Nice report Fraser, it must have been warm up there then with all them midges. Rather you than me mate
Anyways thanks as always for the contacts.
Best 73

they must outnumber mozzies 1000:1 when they get their act together

I’m pretty sure I’ve never ever faced this bug, but I can assure I’d abandon an activation and anything I’d be doing outdoors in case of such cloud of midges craving for my blood. It must be horrible! Totally unbearable for me.
Cheers,

I managed to get last weeks 5 Munros down to about half an hour. 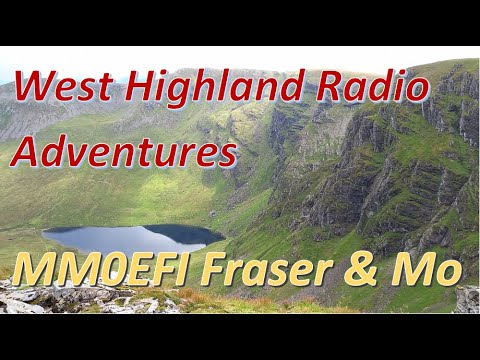 Hi Fraser & Mo, great video of your activation’s, a team effort. Well done to you both.

Great report thanks Fraser. I like your Land Rover - looks just the job for SOTA camping
73’s Ian G4WTF

Over towards the west coast however, they can be much worse, swarming in huge numbers, forming clouds.

I’ve had them nearly this bad. Funnily enough the Scottish Tourist Board never mentions these little fellas.

There is an easy way to avoid the worst of them. Don’t go to the Highlands after mid May, until October. Most years you will see very few if you avoid the summer.