I have a Palm iambic paddle.

I hold the body in one hand and operate the paddles with the other.

I use a 7" tablet for logging, with a leather cover. At the bottom end, I put a small metal strip, the magnet of the Palm Pico paddle holds it to the tablet. So I’m holding the tablet with the attached key in my right hand and keying wit the left hand.

I use a small WT8 straight key. I have velcro on the base of the key and velcro on the top of my lithium battery pack. The battery pack is about the same size as a slim paperback book and forms a stable platform that I can sit next to my rig. So long as you have a space on your rig, clipboard, battery pack, etc. the velcro should work. Effective, almost zero weight, quick to attach/remove, works in the wet.

Though, often just hold the key in my left hand.

I did briefly try a Palm Paddle with magnetic base which sat on top of my FT-817 quite nicely. However, if the soft case is on the 817 this didn’t work and I didn’t want to have to take the cover off every time I used the rig.

I started with the hold the paddles with left hand, sent with right method. Now I fasten it to the board with 3M Industrial plastic “Velcro”. The interlocks are mushroom shaped. It holds the key EXTREMELY tight and firmly. Zero movement. I also hold the pen between my fingers to write and send. It is very automatic for me. I jot down the callsign and then immediately respond with their callsign and RST. While they are sending my report I write the QSO time and my RST. It works for me but your mileage my vary. Just try a few different styles. I’m sure you will find one that works for you.
Tim - K5DEZ

This is my take on CW paddles. Hi Mound Manipulator with HB weather shield and Velcro ended boot laces attaching the key to my right leg. 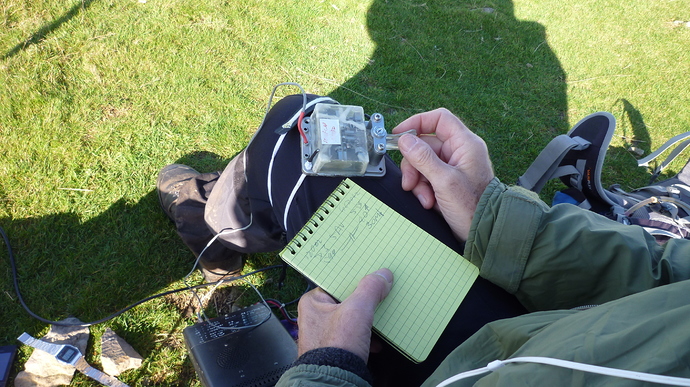 Now that you have been truly immersed in ideas, here comes another one. I went to the market and found a clip board with a wire clip on it. I removed the clip and re-positioned it to the right side as I am right handed. I then mounted my Whiterook model MK-33 on a 1/8th inch plastic base that was the same size as the base but longer on one side than the key. I then cut a groove in the longer side of the plastic base so the clip on the clipboard would hold the key stable. I have been using this for several activations and had great luck with it.
good luck with whatever you decide to do. They all sound like great ideas.
Jack 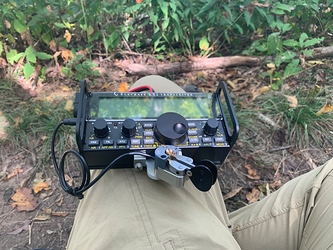 I’ve several SOTA rig go-kits: KX2 package, ATS4a kit, (3) MTR2 kits, (2) MTR3-kits with various antennas + mast choices …depending on the summit, WX and how long I plan to stay and play radio. I’m a big fan of the neodymium magnets as a fastening method for my paddles with the exception of the KX2 which has the finger screws. (Red rescue tape on finger screws …easier to loosen and red heat shrink tubing on cold aluminum paddles nicer to touch keeping fingers warm!) 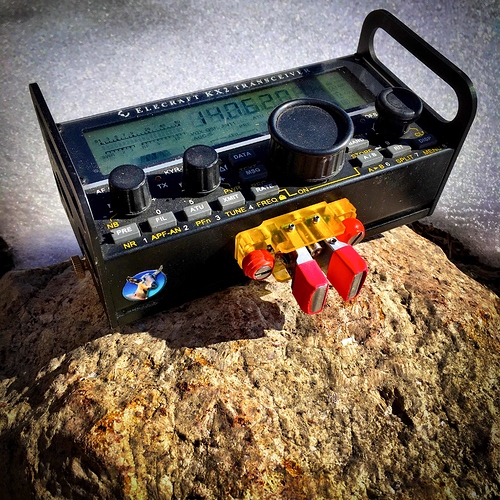 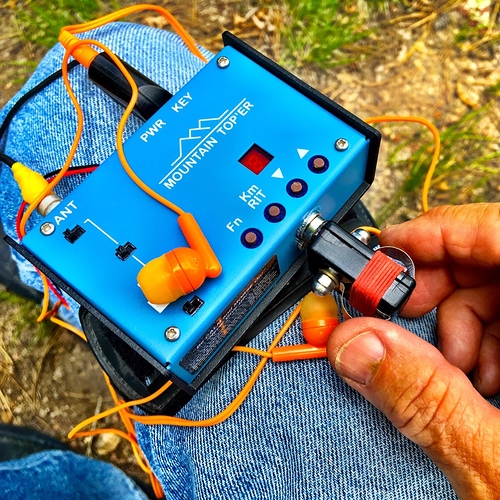 MTR2paddle.jpeg960×960 382 KB
Same here on the MTR3b below my homebrew paddle is held on with magnets 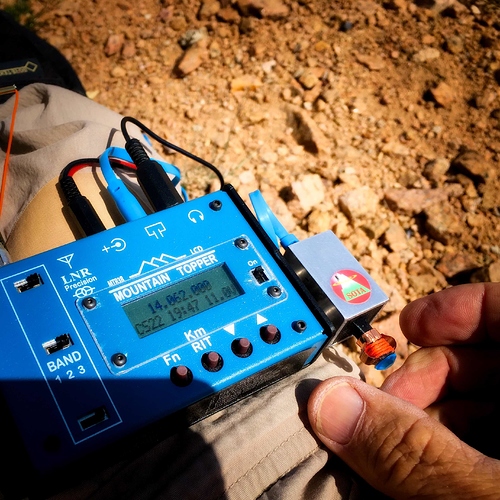 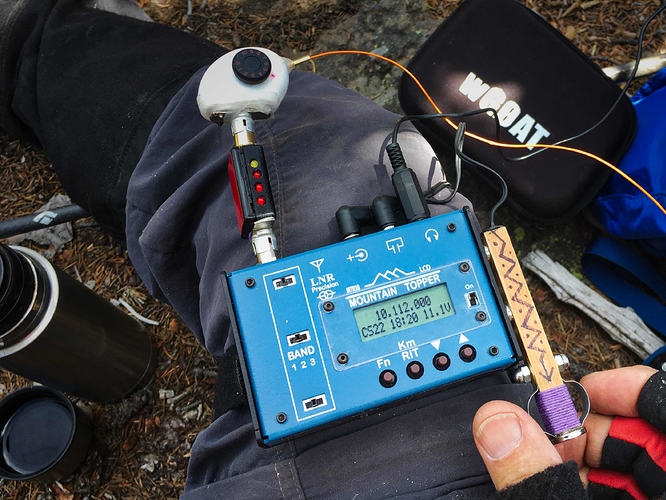 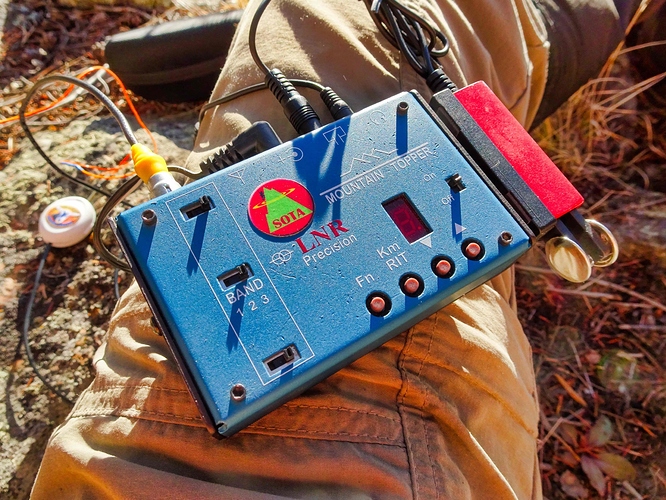 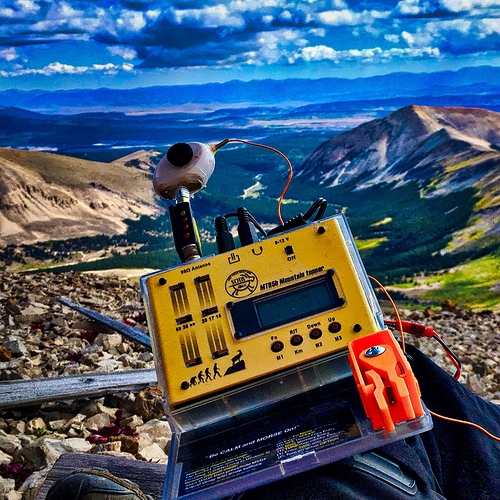 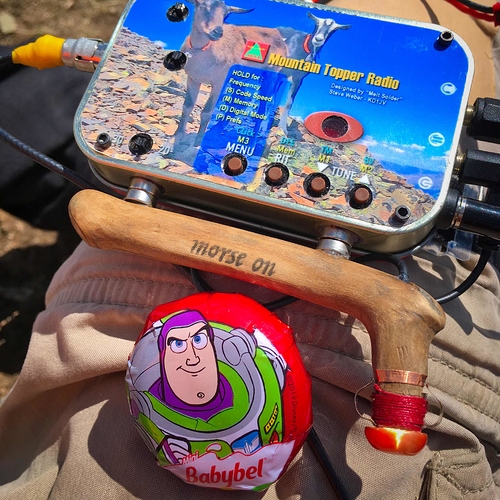 The pencil doesn’t have to be dropped. It’s easy to operate the iambic paddle with the pencil trapped between the rear part of the thumb, the index and the middle fingers of the same hand.

See a short video of how I was holding with my left hand fingers on the paddle placed on top of my paper log while I kept the pencil between my right hand fingers at CQing, but easily changed to writing position when I finished CQing and I got ready to write a chaser’s callsign.

Hello CW’ers,
It’s a personal preference: Everything combined. 3/4" high “desk” with 6AH battery, etc. inside. KX3, paddle, and watch on top with pilot-clipboard-size printed card(s) taped on. Connect antenna and operate. A removable protective cover is put on, and all goes in a lightweight sack for the hike. Have a similar, smaller setup for a KX2. 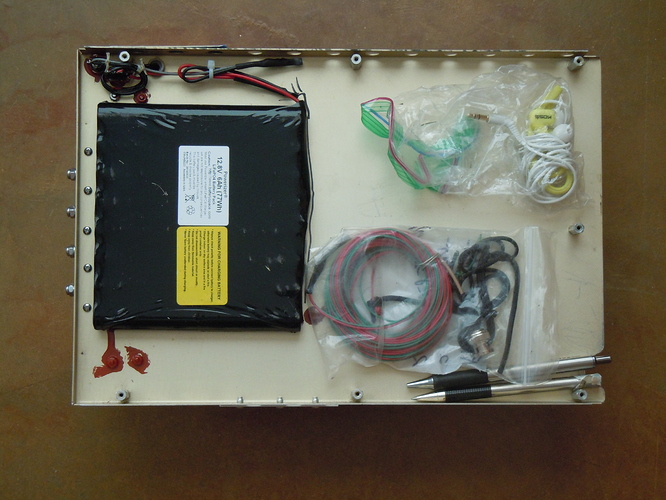 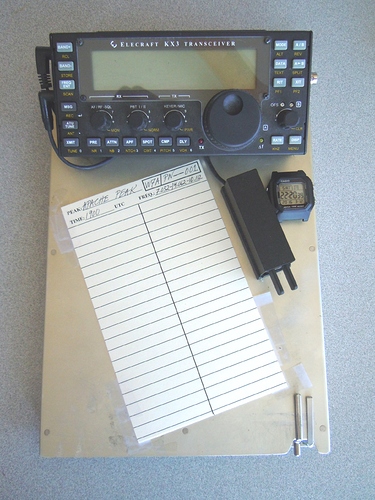 I’m told a picture is worth 1000 words. Works sitting or standing. 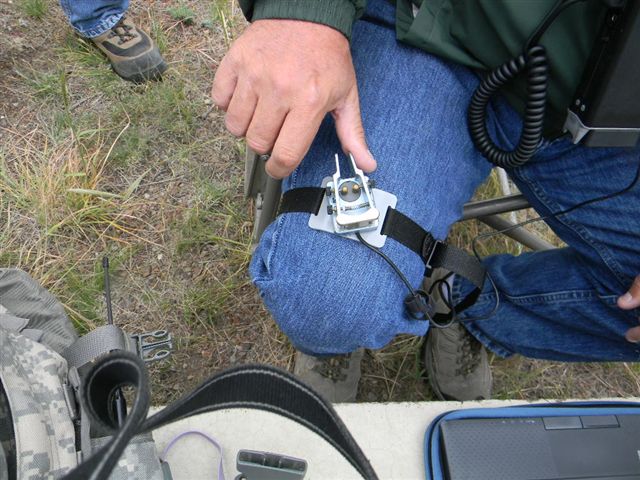 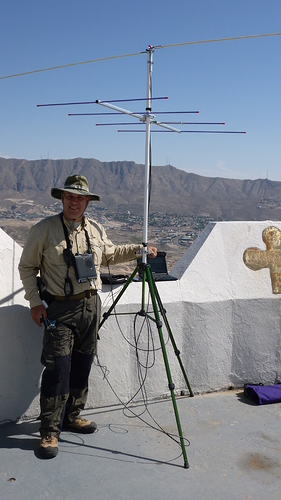 [But then I’ve re-opened lots of zombie threads myself]

It’s the consequence of a sleepless night. I usually sleep very well all night long in one go, but last night I woke up at about 3h30 local, 1h30z and couldn’t fall back asleep, so I took my mobile phone, found that video, uploaded into Youtube, dug a bit to find this old thread I remembered and posted it.
I’m glad for having done it because a few nice ones have been posted and some others may still be to come.
It’s nice resurrecting zombie threads from time to time, even more in these days of SOTA activating nostalgia in many of us…
Cheers,

I have found the Elecraft paddles for the KX3 to be finicky. just when I think I have mastered how to use them, that approach fails and I need to readjust, usually in the field. So I’ve been on a search for paddles that perform more consistently, and then a method to mount them when activating.

The SideKX end plates are a handy place to hang accessories. I fabricated a magnetic base to which I could connect my PicoPaddle by bending a piece of thin galvanized sheet to fit around the left side plate. That just worked OK; the Pico had a tendency to move around, most likely because I am rather forceful on my paddles ;-).

I acquired the N0SA paddles next, but ended up dedicating them to my Shack in a Box (see my QRZ page). I couldn’t figure out an acceptable way to mount it for activations other than a leg strap, which I preferred to avoid.

More recently I purchased the TeNeKe. I created a prototype mount by taping the bracket I made for the Pico to a piece of galvanized sheet I bent into an L, and then screwing the TeNeKe to the L. That worked very reliably.

The final version of this mount uses a modified piece of angle aluminum (for improved rigidity while keeping the device lightweight), to which I epoxied a flat piece of aluminum bent to fit around the left SideKX. See photos below. 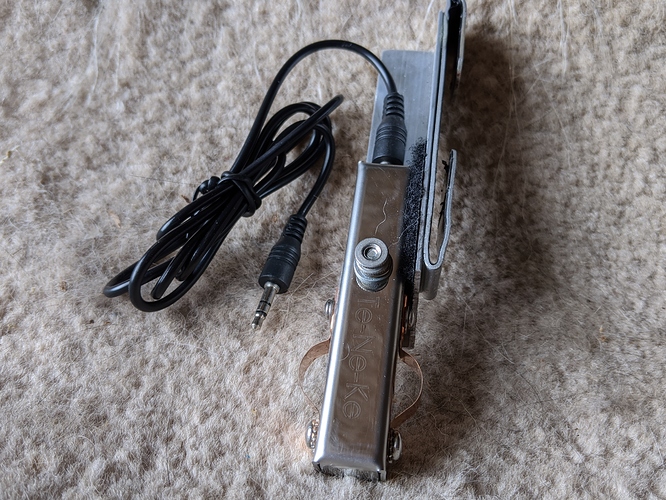 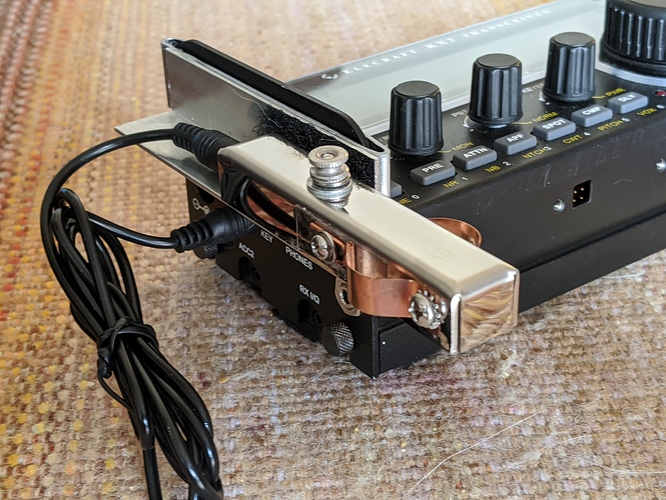 I leave the cable connected to the TeNeKe, so the device takes seconds to install, even if I am wearing gloves. It fits compactly and easily in the soft case in which I carry the KX3. The paddles clear the ground when using the KX3 extended legs. Unlike a leg mount, I can use a single shower cap to cover the rig and paddles in rainy wx (tnx KT5X!) and still be able to send. Of course, one could build it to install on the right side SideKX.

The Elecraft paddles now are my backups. The PicoPaddle is dedicated to my MTR3B, to which it is securely fastened by a single screw through the magnetic paddle base.

So much creativity can be applied to this

it may come down to what radio you choose and how you deploy it. I use a very small 5 watt MTR which sets up some special opportunities, because, it is so small and light, I can simply hold the radio in my left hand. I can attach the paddle to the radio, have no cable, clip the log to the back and write on that, no clipboard either. One approach then becomes a tiny home made paddle which attached to the side of the radio using little magnets. I also made a paddle that mounted on the 1/8 inch stereo plug, simply plugged into the radio’s key jack. Today, I am using a “touch” paddle, two posts mounted on the side of the radio (can not be damaged or out of adjustment) which connects to a postage stamp sized circuitboard inside. By creating a set-up that allows me to simply hold the entire set-up in one hand, I can stand during the activation if the situation calls for it. No packed in folding chair, no sitting in snow, mud, or on a red ant infested log hi hi.

Among the fun things about SOTA activating is being creative. How simple, how small, how light, can you make it? How many interconnecting cables can you eliminate? Can you do it with no feedline, no coax? How about tethering your writing utensil? A KX2 has a paddle mounted already, internal memory of what you send for a log, and how do you suppose those things came about?

photos shows touch paddle, log clipped to back of an MTR. Also seen is a tuner for en EFHW, antenna wire plugs into it directly, a tinySWR indicator inside, 250 mA LiPO battery (green) 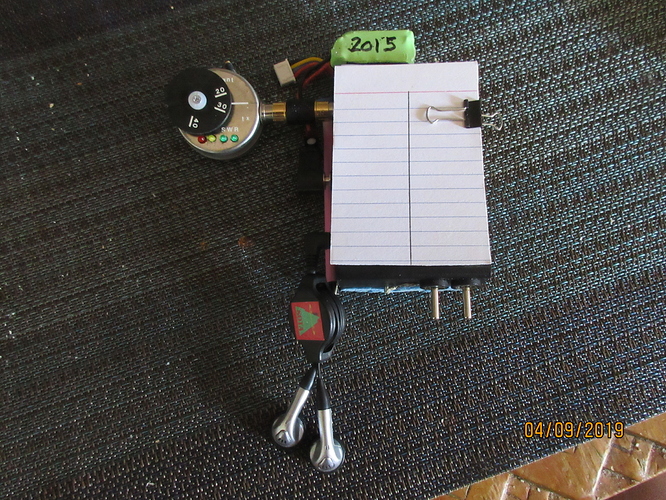 Below is a homemade paddle built into a dental floss case. It uses little flexible pieces of metal that when pressed, extend to make contact against the acorn nuts. It plugs directly into the paddle jack. The tab slips between the clamshell cover of the MTR to prevent the paddle from rotating in the jack during use. It weighs a half ounce and seems almost indestructible. 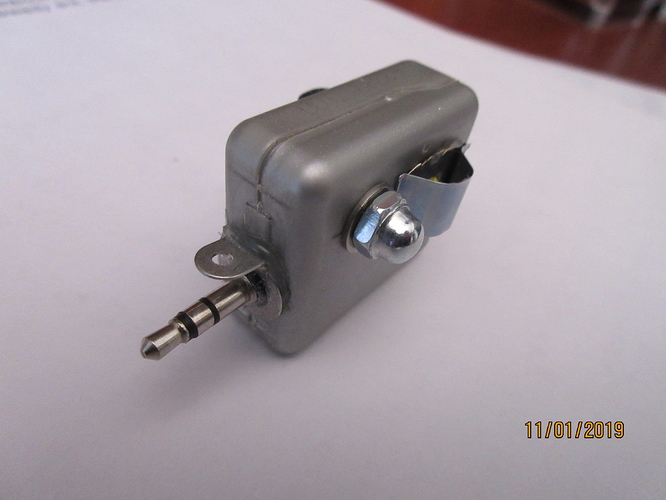 A KX2 has a paddle mounted already, internal memory of what you send for a log

I think it’s diminishing returns on these things. Although I turned on logging when I first got my KX2 to evaluate it, I would never risk failing a tough summit activation by not having an independent log [in my case, a small notebook and pencil].

As for the KX2 paddles, they are my least favourite of my four iambic paddles - too big and far apart. And I prefer the flexibility of having the paddles away from the rig, usually on a Velro thigh strap / metal plate as I like to stand and move about a bit, if it’s not too windy. It’s an age thing - I get stiff legs and aching back if I stay in one position for too long.

Small and light are fun factors to pursue but at this stage other essentials are dominating my backpack weight and volume.

I’ve used a lot of different arrangements and like to switch things up regularly.

This is what I’ve been using lately: 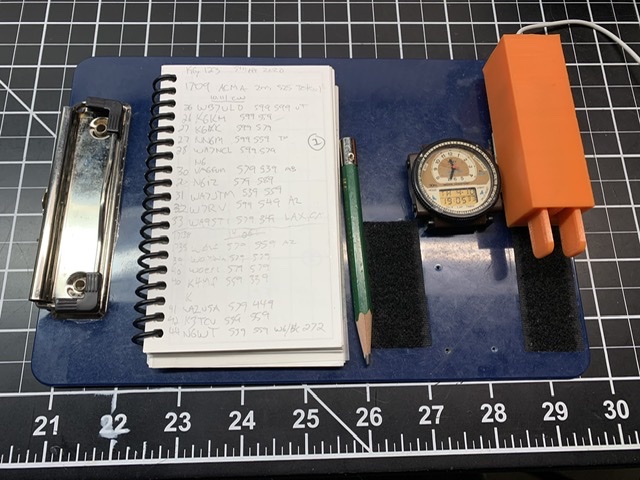 The key is a 3D printed palm clone. I use 3M Dual Lock to secure it to the clipboard. My backup key is the QRP Guys single lever that plugs into the KX2. 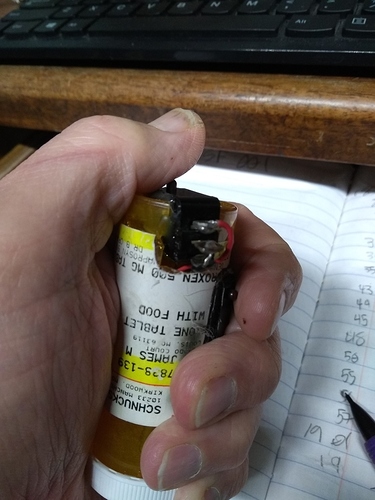