Well, I haven’t succeeded in making it up to this unactivated peak in the San Gabriel Wilderness, but I’ve learned a few things so I figure I’d put them down and others may succeed where I’ve failed.

Noting 127’s lack of activations I was attracted to it and came up with a plan. The only reference I could find was Chiky De Las Torres’s  http://peakbagger.com/climber/ascent.aspx?aid=654147 which wasn’t a successful attempt. After looking at the topo for a while I decided that I’d attempt an entry via the Devil’s Canyon Dam truck trail and the Chileno Canyon.

The first was pure scouting in December 2016. Parking is available at the day use area at the confluence of the West and North forks of the San Gabriel River. I wanted to see what the West fork looked like at the point the Chileno Canyon joined it. I brought my 4 year old daughter and we bicycled the 6 miles to the Chileno Canyon. The West Fork is about knee deep there and I didn’t see any simple way to boulder hop over it, but didn’t rule it out (should have looked harder or ruled it out). After a picnic just around the corner at the Glenn Camp campground we headed back.

My second trip in March 2017 I took my normal SOTA gear, some webbing for light canyoneering, and frame pack and intended to summit. I went multimodal and biked the first 6 miles and locking my bike to a tree on the truck trail. Crossing the West Fork was tricky as I didn’t bring water shoes and could not find a place to boulder hop after all. I went carefully barefoot and made it to the Chileno Canyon entry. The creek there was running still from the significant winter rains we received that season. The canyon is high sided, but passable up to about 0.8 miles in. A fresh rock fall had created a significant dam and lake which continued around a bend which I couldn’t see past. I wasn’t prepared for amphibious hiking and had only basic waterproofing of my gear. Despite the water being quite clear (and freezing cold btw) I couldn’t really tell how deep it was. I decided to wade in and if it came above my waist I’d turn around. I made it almost to the bend hoping to peer around and see if the way was passable. I was in up to my waist at that point and there was a downward trend to the bottom. I estimated the lake was chest deep on my 5’7" frame (I was wrong). Considering I was now cold and wet I changed into what backup clothes I had and sloshed back to my bike in my soggy boots. 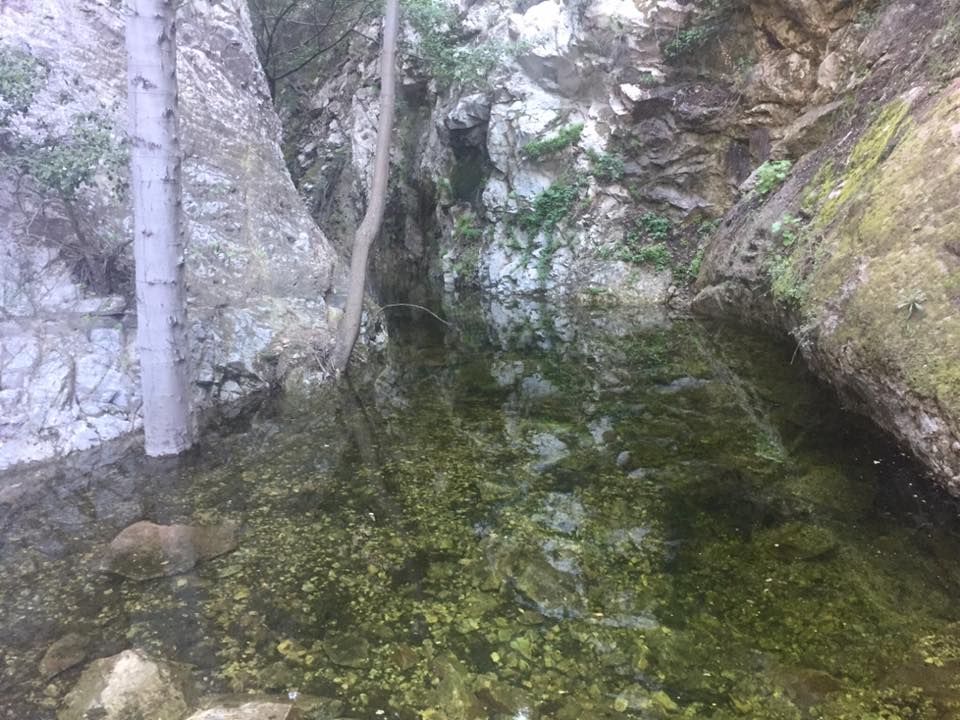 17951899_10155008104202530_6674734941348927099_n.jpg960×720 118 KB
My third attempt in September 2017 was inspired by comments I received that perhaps the fall would make for a dryer trail. This time knowing the potential for water hazards I downsized my gear to the bare minimum of an Osprey 15 and triple waterproofed the critical components (radios etc.) and brought water shoes. I biked out and hiked back, the now mostly dry creekbed, to the lake which was at this point only a third of the size it had been in the Spring. Encouraged I put on my water shoes and waded around the bend. There I found a low waterfall which had eroded the bottom significantly. I could stand there with my pack on and have it only slightly touch the water. I scrambled over the waterfall and made my way up trail about 30 ft where I found myself surrounded by 60 or 70 ft high waterfall and sheer walls on all sides except the way I had come. The extreme left side looked the most promising so I converted back from wet foot to dry foot and attempted to scramble up. The rock was very crumbly and although I made it 40 ft up I could not see how to connect with the canyon which was on the other side of a sheer rock face. After giving myself a talking to about safety I clamored back down and made my way down the canyon. Someone with proper canyoneering gear could scale this falls, but I donot believe it is passable without. I headed out and dried out at the day use area and had a picnic while listening to the Texas QSO party. 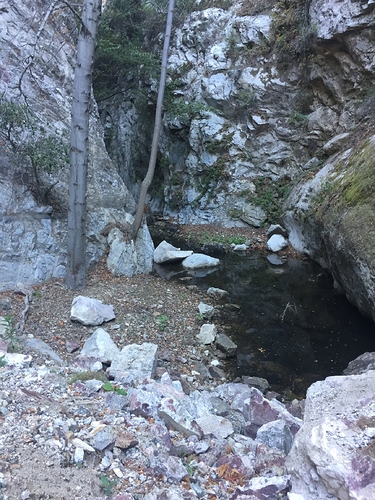 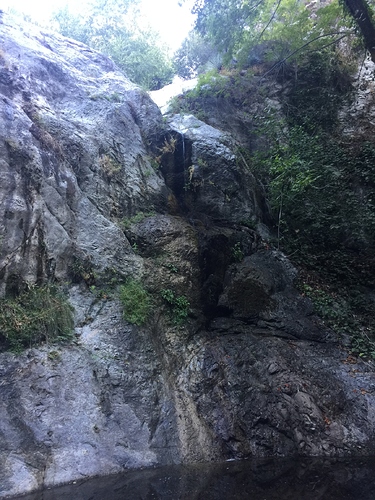 If anyone is interested in attempting I am game for another attempt, but we are going to need gear and skills I do not have yet. 73 KB9ENS

If I were in Southern California I’d be all over attacking that one with you as it looks like an interesting problem that you’re working through. At this point, I would skip the gully routes and explore some of the shoulders and ridge lines. It may turn into a horrible bushwhack and scramble, but it would at least get you to the top.

Great attempt of Chileno Canyon. Have been in commo with “Chiky” (real name Steve!) off and on, he may eventually make another attempt on his route, he says he left the canyon (not Chileno) too early

There’s nothing like being the first activator for a summit. I’ve done a few that way out in the deserts (Death Valley, Mojave NM), but I didn’t realize there were any that close to the LA area that had not been put on air.

I live near you in the Inland Empire area (Menifee) and would be very interested in a final push to put that peak on the air. I looked at it on the map, and it is definitely a formidable route. The canyons in that area are always going to be choked with brush or water, so I agree with K7EEX that a ridge-walking approach might be best - perhaps starting from the roadside somewhere on Devils Cyn. Dam Truck Tr. like you did.

I have an ATarrl.net email address, so hit me up if interested.
Brandon Clark
N6BSC

And thanks for the link! It’s very cool that other people are working on this peak. I still haven’t gotten a chance to make a second attempt yet. Can you post the following message to that forum for me?

I made an attempt on this peak in May 2016 as part of my personal quest to summit all the 500 prominence peaks in the San Gabriels. Besides this, there are the two in the experimental forest area I haven’t summitted yet. That said, I think this is the most difficult one of them all.

My route in 2016 followed started from the parking lot for the West Fork of the San Gabriel River (as did KB9ENS), but I took the trail up Bear Creek after about a 1 mile hike on the road. After a few miles, I departed the trail to follow the west fork of Bear creek, which runs along the northeast of the Peak 4654 “massif”. This drainage is (was) choked with downed trees, poison oak, nettles, and all kinds of plants, but I’m quite confident that it is much much faster going than trying to follow the ridge. After another couple miles, the main stream turns north, but I took a tributary to continue due west (to continue moving along the north side of the peak). My plan was to target the saddle between 4065 and 4654. I departed the stream and climbed steeply (but easily enough) to the saddle. I figured I’d follow the ridge from there, but that was a mistake. It would have been a nightmarish bushwhack from there through stiff chapparal plants and rocks - I gave up at that point. You can see the picture from there on the peakbagger link from the original poster.

Given what I learned, my plan for the next attempt is to continue in the stream past where I left it up toward the saddle that is due north of the peak and then ascend from there. I think it’s doable - but who knows

I think Fall is a good time for this route as the stream should be low and maybe the foliage in the creek has died back a bit.

Hey that’s great… I think Bear Creek is the logical next choice. I wasn’t sure why he’d turned back. Next time I’ll be prepared for bush wacking.