An invite was accepted from Richard G3CWI, for Jimmy M3EYP and I to travel with him to the Ponderosa pair on Saturday 7th March 2009. Richard commented that Moel y Gamelin GW/NW-042 and Cyrn-y-Brain GW/NW-043 would not be nearly as popular without the famous Ponderosa (cafe, gift shop, B&B, motorcyclists’ rendezvous etc) complex between them. However, it is, and it makes a very pleasant day-out package.

So, which to do first? Well, that much was obvious. Lymm Truck Stop for a rather large cooked breakfast and mug of tea.

In the car park at the Ponderosa, my blue fleecy hat did not appear out of Richard’s car boot along with the rest of my gear. However, I was able to make an emergency purchase of one of those buff things in the Ponderosa gift shop.

In short order, the three of us were climbing the steep grassy bank towards the summit of Moel y Faen, on the first leg of our day’s expedition. Just ahead of that first subsidiary summit, I diverted left along a more minor path for a more graded descent to the saddle ahead of Moel y Gamelin GW/NW-042.

We were tempted to used one of the big rolls of heather on the minor “top” ahead of the summit true for shelter while activating, as the wind was picking up. Jimmy disallowed this tactic, reporting that it could not be absolutely certain from the map that the little drop before the final climb was not more than 25m below the summit. So to the summit we went, before diverging to various semi-sheltered spots to set up.

Richard went for 40m CW, and quickly polished off around 15 QSOs. Jimmy opted for 2m FM on his handheld and did 14 QSOs. I set up the new 20m vertical and made 22 QSOs on 14.013MHz CW. It was nice to work a mix of regular SOTA chasers, and unfamiliar callsigns from places without SOTA associations. Of most interest were calls from the former USSR, including UA2, UA9, YL and LY.

We made good time on the descent, so much so that we weren’t ready for a substantial lunch at Ponderosa Cafe when we arrived back there. It certainly had been a more-than-substantial breakfast at Lymm Truck Stop that morning. However, a snack, drink and brief rest was in order, so Cornish pasties, a sausage roll and drinks of Irn Bru provided the respite.

Having got the harder climb out of the way first, it was a bit of a breeze ascending Cyrn-y-Brain GW/NW-043 after lunch. I even dispensed with my poles for a hands-in-pockets amble for once, but Jimmy would still not be parted from his.

We each stuck to the same band/mode combinations and working conditions as we had done earlier on Moel y Gamelin GW/NW-042, and all found that conditions had changed and worked respectively less contacts. We all comfortably qualified though. The wind got colder, and some rain was on its way, so Richard commenced his descent while I was wrapping things up on 20m CW. After packing away, Jimmy and I shared the flask of hot chocolate on summit, and then commenced our own descent. We stuck to a swift pace, also trying to beat the incoming rain to the Ponderosa - which we did, by seconds!

The drive home was punctuated by Thwaites Lancaster Bomber at the Moors Inn. However, we had made decent time all day, and Richard was dropping us off at home before 4.45pm. A good day, and another ten points towards Jimmy’s MG campaign.

Many thanks to all stations that called and/or spotted, and to Richard for the invitation and driving.

Thanks for the report Tom, & a name that brought back memories. I once attended a CB “Eyeball” at the Ponderosa on what was a lovely warm sunny day at sea level. Up on the Horseshoe pass there was still a couple of feet of snow lying at the side of the road & it was a bit nippy.

Totally unprepared for anything except warm temperatures I spent the night shivering in my car & set off home at first light.

Strangely I still have found memories of that night.

All good fun had in the name of radio

This is a classic SOTA day out. It simply has to be done, every calendar year. 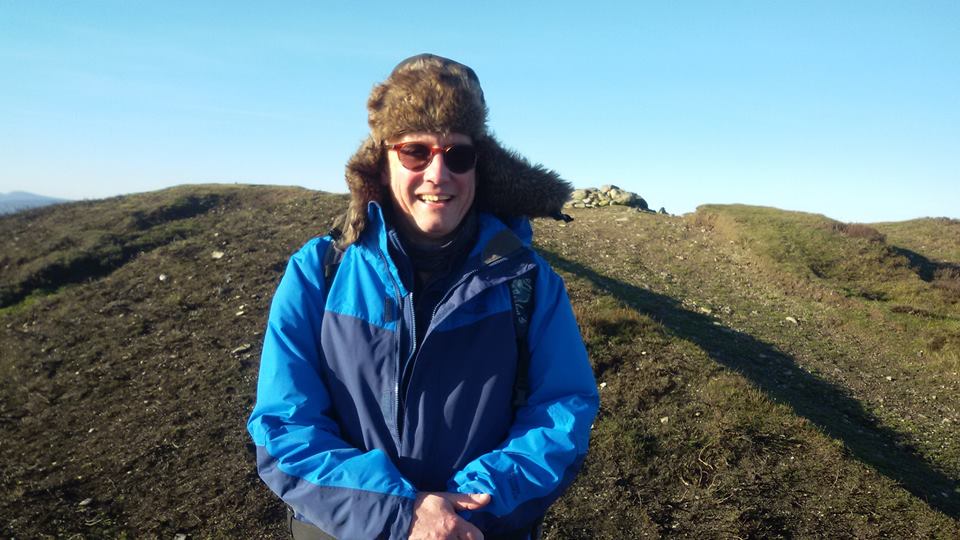 I picked up Richard at 0630 and we drove across to North Wales, via breakfast at the McDonalds at Lymm Truck Stop (M6 J20 services). We noticed the satnav was taking us an unfamiliar round and found ourselves at the bottom of the steep valley with a rough stony crossing over a ford to negotiate. No problems - thankfully. 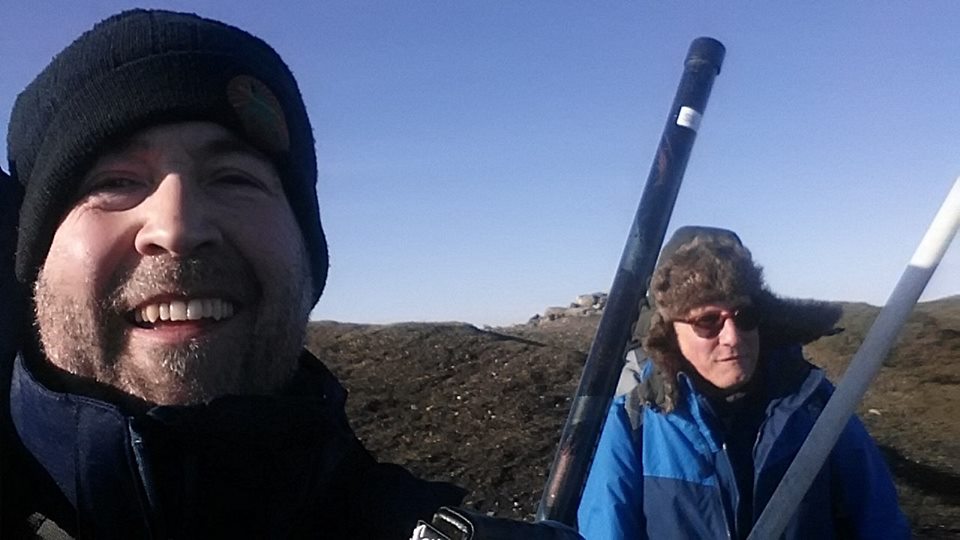 Moel y Gamelin GW/NW-043 was same as usual, with the initial slog up Moel y Faen to tackle, and then the several false summits. 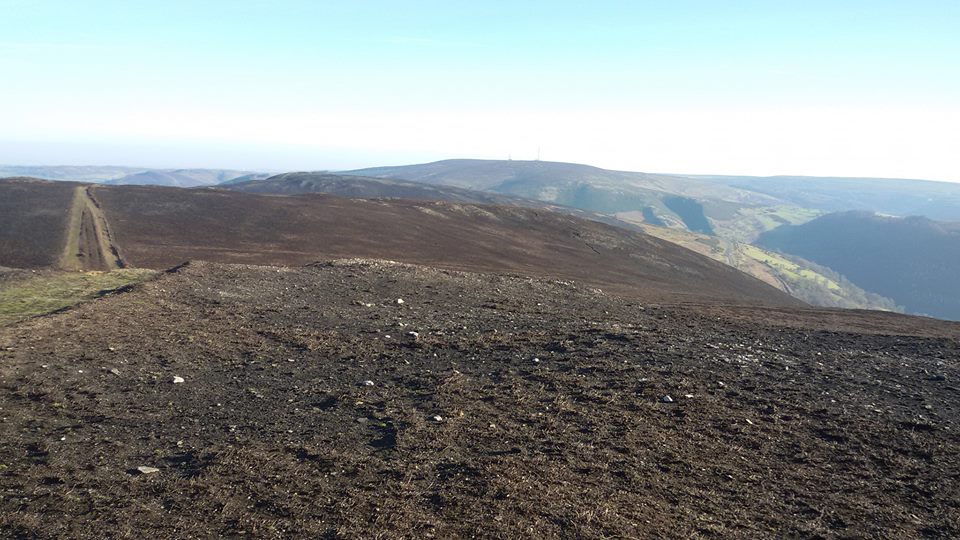 Richard set up for some HF, mainly 5MHz activating. I prepared for 2m FT8, finding the band rather busy and logging 14 contacts. Locators worked were IO70, 75, 83, 85, 93, 94, JO01, 02. At one point I was called by a DL station, but simultaneously by a G station in the adjacent IO93 square - and WSJT-X automatically launched into working the nearer station. I called the DL station immediately after this QSO, but never saw it again. 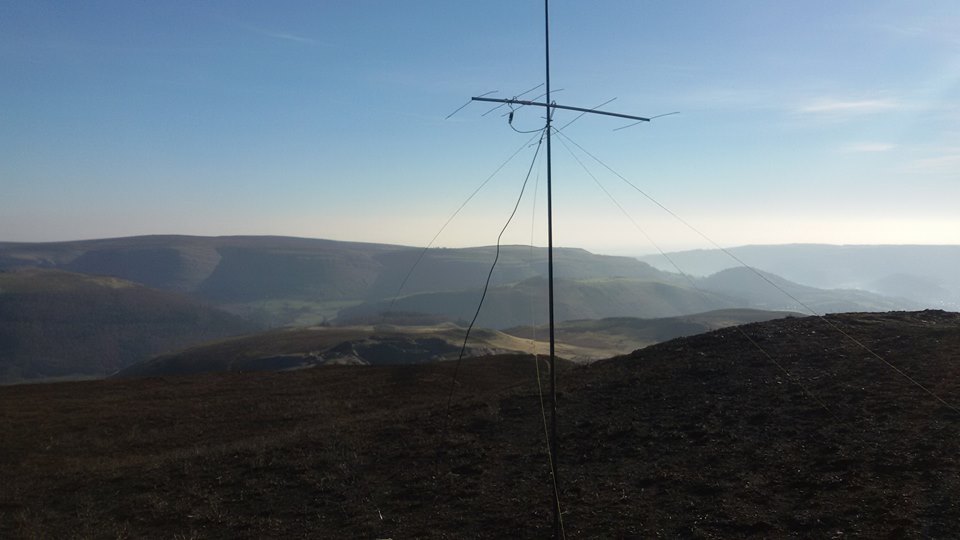 After packing up, Richard was grumbling about the burnt heather, and slipperiness of the resulting bare peaty soul. As the words left his mouth, my feet disappeared from beneath me, and I was dumped into said peaty soil. Richard laughed. My sense of humour abandoned me. 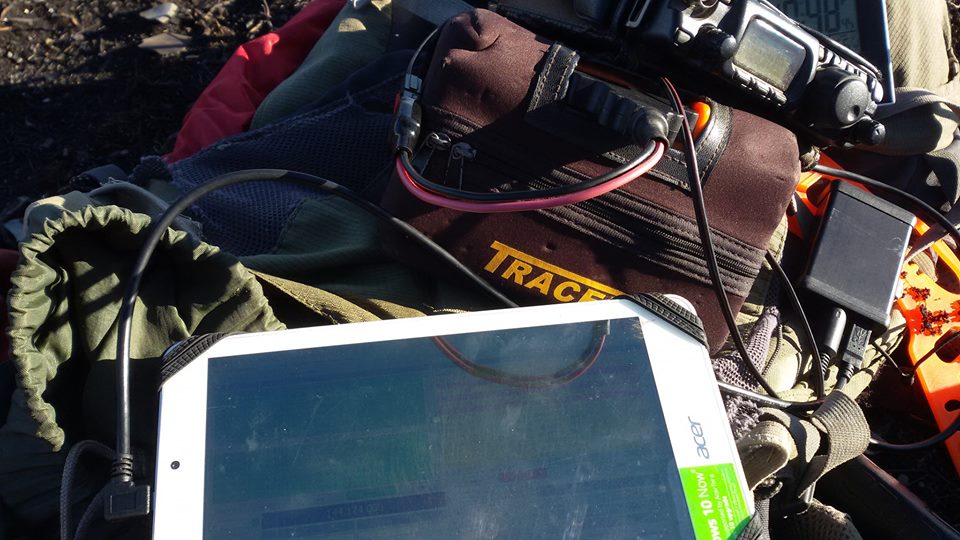 We walked back to the Ponderosa under brilliant sunshine. 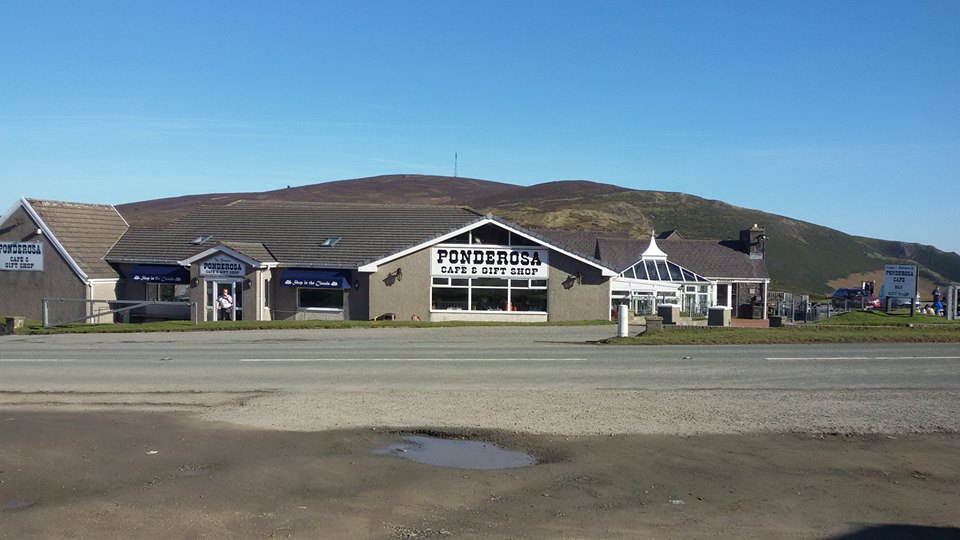 Lunch at the Ponderosa was the delicious steak & ale pie, with chips, peas, carrots and gravy. It was wonderful, as it always is, and set us up for the now entirely necessary “constitutional” walk up Cyrn-y-Brain GW/NW-043. 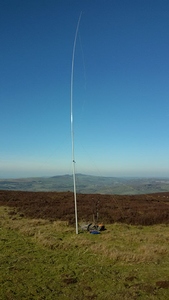 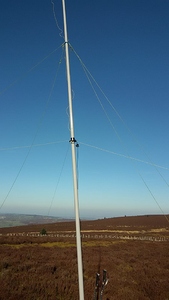 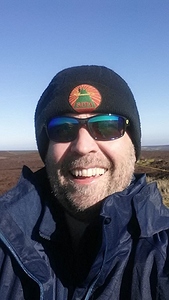 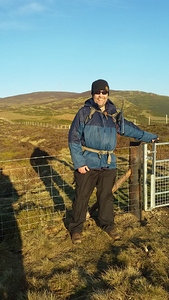 This time it wasn’t 2m FT8 for me. I had built a 30m GP antenna during the week which I needed to test and trim. To cope with its size, I need to take a Travel Mast for this - as a standard 6.7m fishing pole would not be long enough. 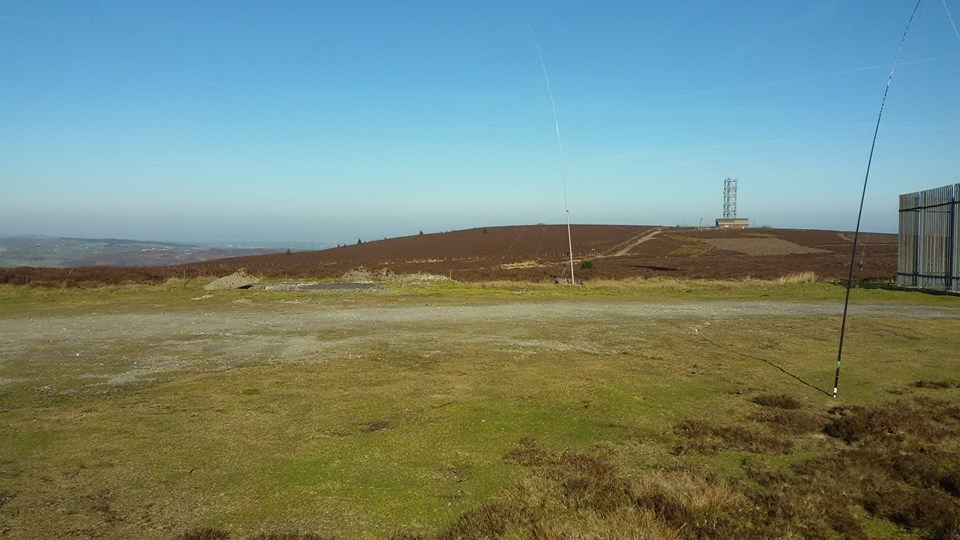 It took a bit of fiddling around to cut the antenna to optimum size, but then came the rewards. 27 QSOs were made in a very busy, and at times over-exuberant pile-up. Good to work my friend Kjell LA1KHA/P S2S from Holtankollen LA/TM-049 (I think ‘Holtankollen’ might be Norwegian for ‘Cloud’!). I was pleased my antenna worked; it could be just the thing from The Cloud for a dawn activation when the MUF is significantly below 14MHz. 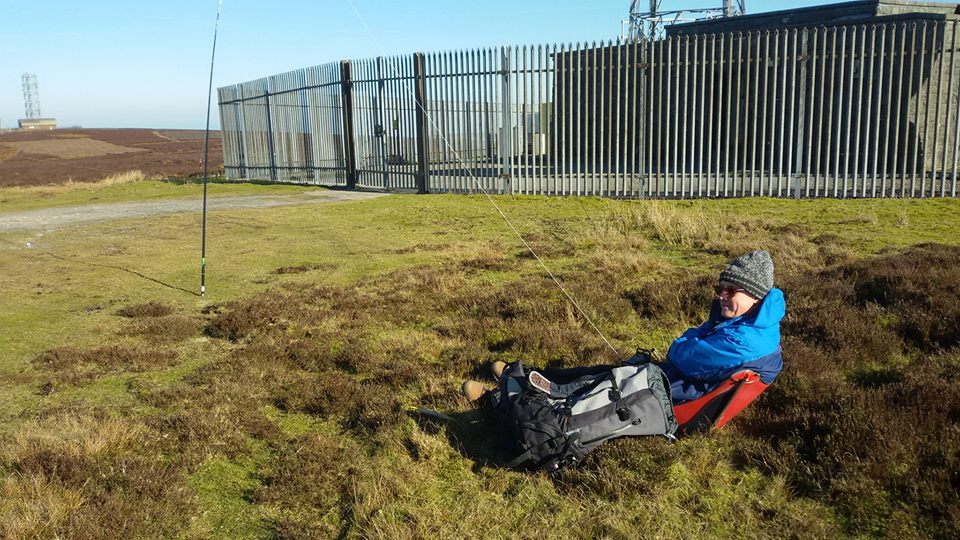 A historical landmark moment occurred late into the descent when we noticed that the old rickety stile of the last 17 years had finally been replaced by a steel kissing gate.

The journey home took in The Blue Cap pub in Sandiway for a very pleasant Mobberley amber ale. All most splendid - as usual.

We were tempted to used one of the big rolls of heather on the minor “top” ahead of the summit true for shelter while activating, as the wind was picking up. Jimmy disallowed this tactic, reporting that it could not be absolutely certain from the map that the little drop before the final climb was not more than 25m below the summit.

FYI it’s probably in the AZ: 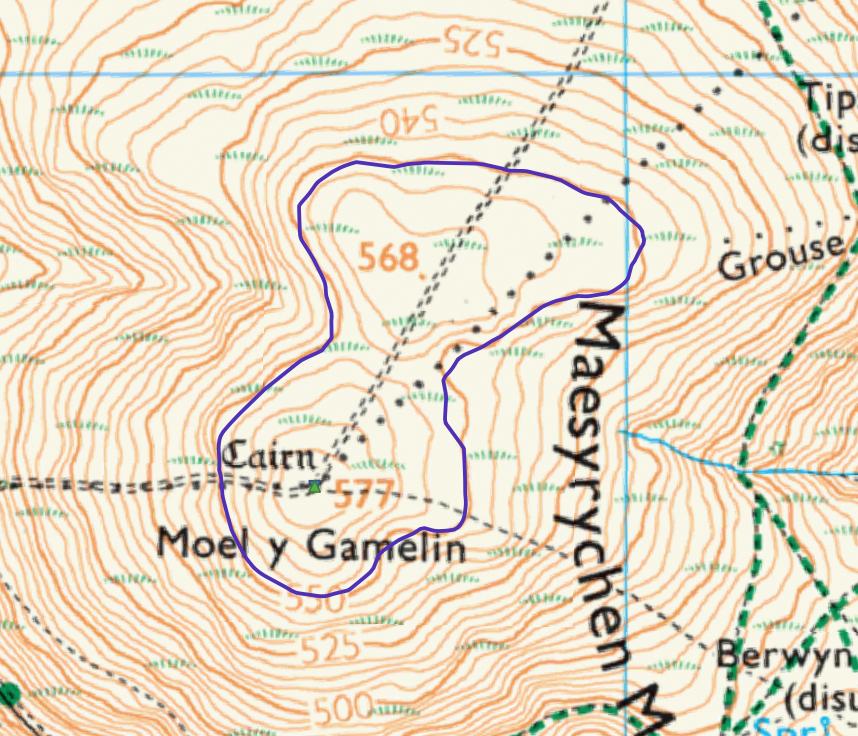 I couldn’t find LIDAR data here (UK LIDAR data cover mostly the valleys, for flood risk purposes I think) so the purple line is the AZ generated according to the OS surface model. The drop is 20.3 m.

Strangely enough we did speculate yesterday that Jimmy might have been wrong. Seems he was on this (rare) occasion.

Looking at that map I agree. The lowest the saddle can be is 555m ASL - well fractionally over of course.

Aren’t they 5m contours though, meaning the saddle is 17-22m below the summit?

Interestingly looking now at OS Vector Map Local 1:10k (sorry I can’t reproduce it) they give a col spot height of 533m (→ 24-m drop). It’s frustrating that’s significantly different from their terrain model, but still they’re both good for the AZ.

It’s so odd seeing the BT Type8 tower without any dishes on it.

Aren’t they 5m contours though, meaning the saddle is 17-22m below the summit?

Yes, you are right, didn’t notice they were 5m contours, but you are wrong on it below 17m to 22m below the true summit. It means it will be 22m to 27m below the truce summit.

I agree. I missed one of the contour lines. From the 1:25000 map alone, you can only determine that the saddle is above 550m, so no certainty that the AZ extends through it. However, as you say, it looks like the LIDAR data gives this assurance.

Never forgetting, of course, that contours on these maps are not accurately surveyed.

True Martyn, but you go off the best available to you at the time. At some point in the past, that was the OS 1:25000 Explorer maps. Now, I’m content to trust the AZ boundary map produced by G4TJC.

FYI it’s probably in the AZ: Checked this with the barometric altimeter in my GPSMAP 62s and found for two traverses the drop from the summit to the col was 23m so I’m confident in confirming that the “twin peaks” are both within the AZ.

For anyone planning on visiting Moel y Gamelin, as Tom alludes to above a huge area surrounding the summit has been severely burnt and any excursion from the track takes you into truly horrible conditions, with nasty fine ash and bits of carbonised heather that gets into everything. There is a small patch of unburnt ground at the col where with care there’s room to set up HF antennas, from which Gerald and I operated for the EU <> NA S2S event yesterday. You might just get a VHF antenna on the true summit if you are careful with the guying.