The first week in May was school mid-term break in our house and we were on holiday in the Dingle Peninsula in County Kerry, where I got the opportunity to activate some of the best summits in this area.

The weather in EI is unpredictable at the best of times and in this part of the country what you get for your chosen week is always a bit of a lottery. This was a family holiday so I had to co-ordinate my activations with the available weather and domestic commitments. This made precise planning difficult and any alerts I posted were subject to cancellation at short notice. I pre-programmed routes for about a dozen summits into the GPS in advance and I made the best of use of the available weather, and took the opportunities when they arose.

Our holiday home was located on the road to the northern side of the Conor Pass leading to Dingle. The pass which was only a 10 minute drive away is at 400m, has ample parking and makes a great starting point for a number of summits. Over the week, the weather steadily improved and the final tally was seven summits activated. Top of my wish list for this trip was a chance to activate Brandon Mountain IS-003 and Brandon Peak IS-007, two of the best summits hikes on the peninsula. The ridge walk between Brandon Mountain and Brandon Peak is one of Ireland’s finest hikes. It’s not difficult to activate both summits on a single expedition but it is best left until visibility is good. For most of the week, the two summits remained stubbornly shrouded in cloud. However, on Friday, patience was rewarded and light winds and clear blue skies provided perfect conditions.

Although it was the lowest of the summits activated, the most enjoyable for me was the evening sprint to the top of Croaghmarhin EI/IS-074. With fantastic views overlooking Dunquin Harbour, making it back to the car just as the sun was setting.

All activations on this trip were solo adventures bar one (I was accompanied by XYL and children on EI/IS-053 Mount Eagle). On the bands conditions were pretty poor on HF throughout the week – generally weak signal with lots of qsb. Nevertheless, thanks to all the chasers who made this a memorable week of SOTA fun. A special thanks to Jan OK2PDT, worked as S2S as well as (multiple) chaser. All activations were made using an FT817nd, Hyendfed 40-10m EFHW and powered by 4200mAH LifePo4. For the record, the following summits were activated:

Below are some photos from this trip. 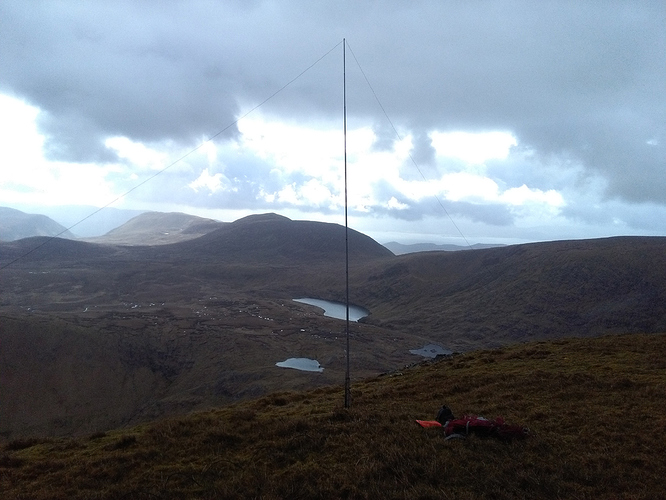 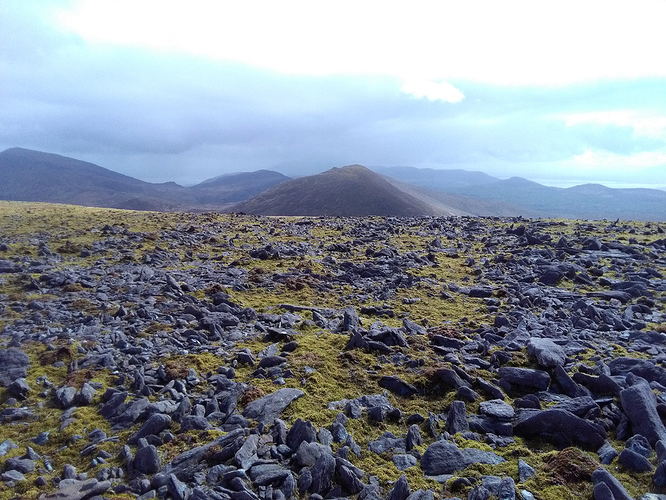 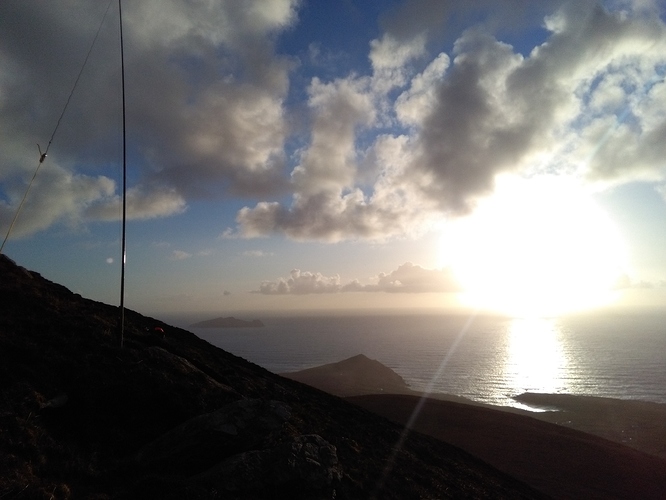 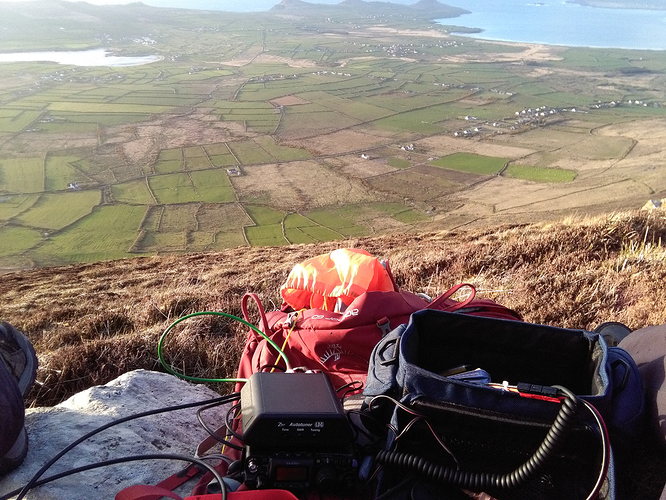 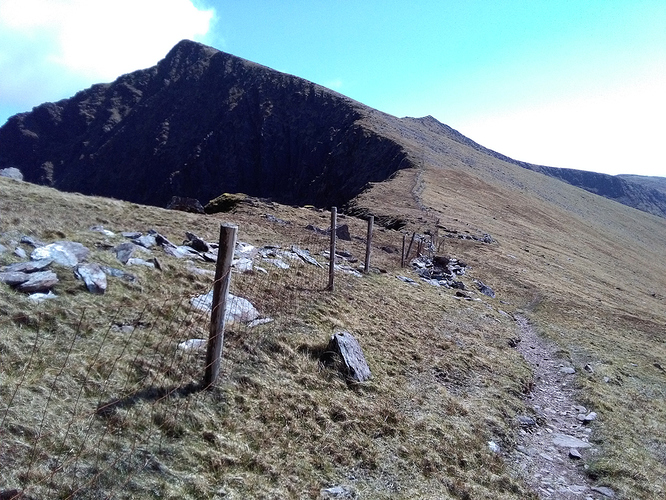 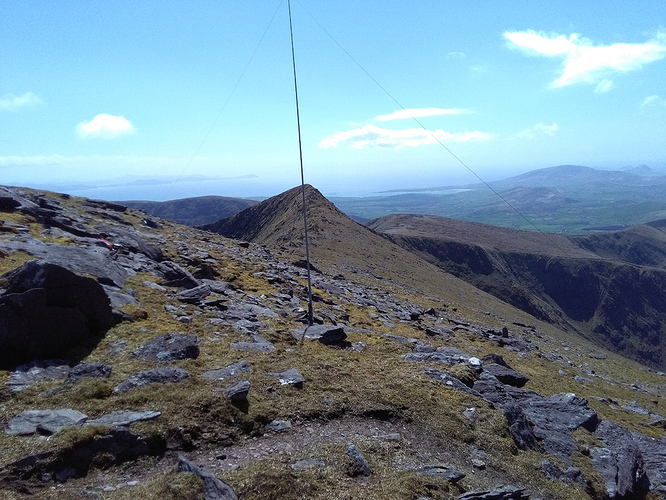 For a pleasant change, the EI June Bank Holiday coincided with excellent weather in EI/IW. After weeks of dry weather, an excellent opportunity arose for first activations of three of the more challenging summits in this region. My wife and children had gone to stay with family in Cork for the weekend where she was running in a half marathon. This left me with the whole weekend to spend on the hills.

First up on Saturday was EI/IW-011 Ben Gorm. This is one I had previously attempted at the end of March after activating Croagh Patrick EI/IW-005 earlier in the day, but on that occasion I was beaten back by the rain. This time, conditions couldn’t have been more different - warm sunshine and dry conditions underfoot.

The standard access to this summit is from the tourist car park to the nearby Asleagh waterfall. From here, there is a track between a pair of sheep fences, which funnels you up through first 50m of elevation, ending at a gate to the open hillside. From there is a very unpleasant slog over steep, bumpy, tussocky ground until the main ridge is reached. This is then followed west until the main plateau is reached at about 600m elevation. Although the steepest section of the climb has now been overcome, the summit is still over 1km away across a wide plateau. In poor visibility, this would make for tricky navigation, but on this day conditions were perfect.

I moved a little way from the pile of stones which marks the summit before setting up. I hate being interrupted mid-activation and I’m sure other walkers would much prefer to enjoy the summit in peace – not that there was another soul on the mountain on this day. It’s great to set up at the summit in good weather for a change and enjoy a leisurely activation. Conditions on the bands were pretty poor. Reported signals were pretty low with lots of qsb. Self-spotting, I made 10 qso’s on 20m ssb, including one S2S with EC2AG/P on EA2/SS-059. Switching to 40m brought lots of static crashes from thunderstorms further east and I managed just 4 more qso’s here, all G’s. The trudge back across the plateau and the descent coincided with the warmest part of the day and although I had packed extra water, I was pretty frazzled by the time I reached the car. I had originally planned to activate EI/IW-025 Leenaun Hill on the way home as well. On a cooler day, this would have been pretty straightforward, but not on this occasion! 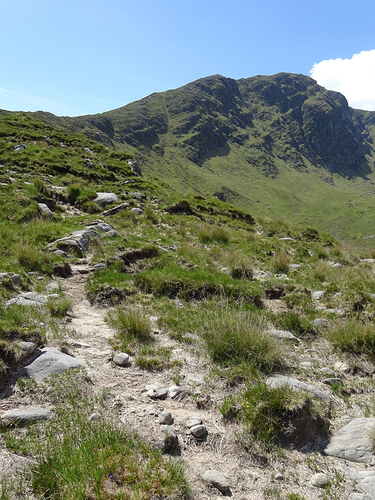 Hiking up the ridge on EI/IW-011 Ben Gorm 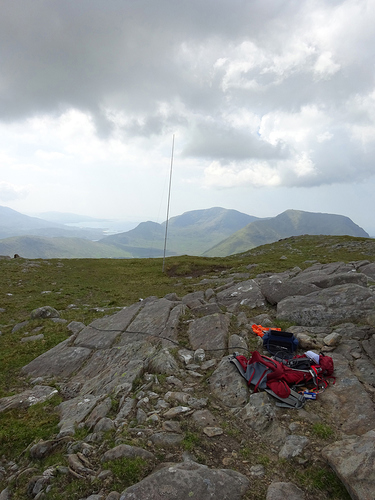 On bank holiday Monday (6th June), the weather still held good, slightly cooler conditions with clear skies. This was a perfect chance to attempt something I had been planning for some time - first activations of EI/IW’s highest (Mweelrea EI/IW-001) and ‘trickiest’ (Ben Lugmore, EI/IW-003).

I planned a route which started from the easier western approach to Mweelrea. This meant a long drive from Galway via Westport and Louisburgh. My plan route was to summit Mweelrea first, then, if visibility remained good, to tackle the Lugmore ridge via Ben Bury.

Mweelrea from the west is a long trudge across a grassy slope, which only becomes steep as you near the col between Mweelrea and Ben Bury is reached. From there, turn right and continue up the rocky slope to the summit. I set up just beyond the trig point, on a peat hag overlooking Killary Harbour. Conditions on the HF bands were no better than Saturday. Despite self-spotting, I logged just 5 qso’s on 20m ssb, including S2S with Jan, OK2PDT/P on OK/VY-071, and 7 qso’s on 40m ssb including S2S with both G6WRW/P and M0YHB/P on G/LD-044. Not many stations around the bands at all (chasers or otherwise). It occurred to me, that this wasn’t a public holiday in most of Europe (except Sweden, I think) so this may account for the lack of chasers. 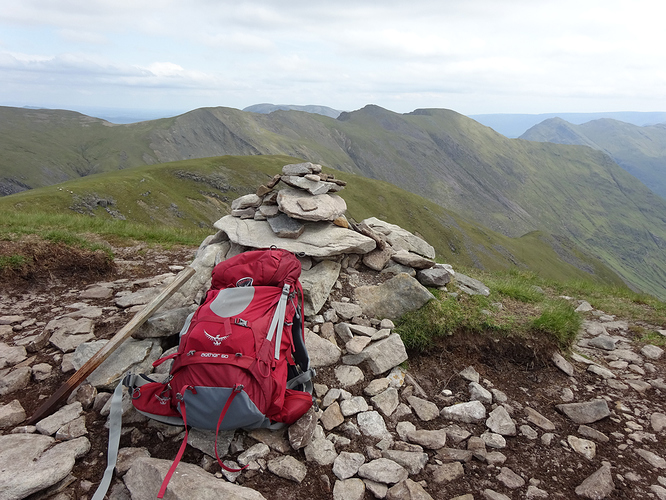 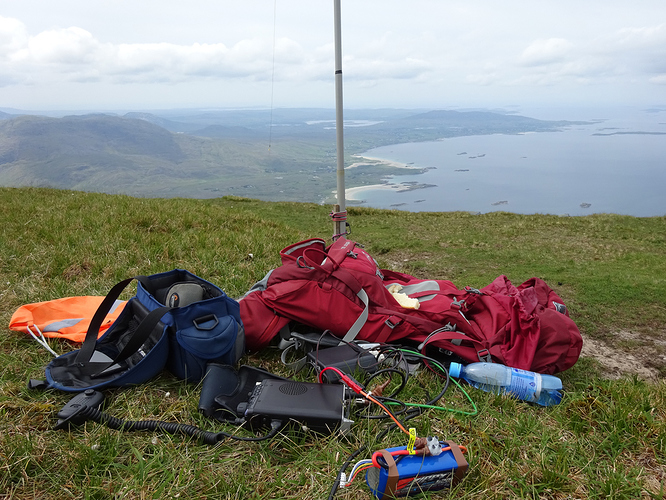 Objective #1 achieved, I set off back to the col and, skirting around Ben Bury, I made straight for the Lugmore ridge. Whereas Mweelrea is a great rump of a mountain, Lugmore is more a long steep ridge running eastwards from Ben Bury. The ridge comprises the summits of Ben Lugmore West Top, Ben Lugmore itself and Ben Lugmore East Top, like teeth on a comb. From Ben Bury, West Top first needs to be overcome before reaching Ben Lugmore, the highest point on the ridge.

Hiking the ridge is said to need a good head for heights. Having read several accounts of this, I was curious to see it up close for myself. Actually, on the ground it wasn’t nearly as intimidating as I expected. Sure, there is a sheer drop into the corrie to the north and a very steep scree slope to the south – but it was exciting rather than scary. However, these were perfect conditions. In windy, misty conditions, this would probably be a scary place indeed! Ben Lugmore is the steepest summit I’ve yet erected an antenna on. I set up just below the summit on the scree slope. A tricky job, and the antenna was at most 5m above ground at the apex. This didn’t help the signals and again, few chasers were to be found. I managed just 4 on 20m ssb, including another S2S with Jan, OK2PDT/P on OK/VY-071, followed by 3 more on 40m. To be fair, I hadn’t posted an alert for this summit as I wasn’t sure it would be possible to combine both summits in
one day, before I got there. Scant rewards, I suppose but Objective #2 accomplished. Back over the ridge, the descent was fairly easy. Back at the car - up and down in about 6 hours.

Word of warning: I picked up three sheep ticks on this walk aone, all of which were well embedded before I had a chance to deal with them – two on my ankles and one on my wrist. Why do they leave such scars long after they have been completely removed? If you’re walking on these hills, beware! Nevertheless, a great day out – thanks to all of the chasers who could hear me. Special thanks to Jan OK2PDT, who makes qso’s happen on the merest whiff of a signal! 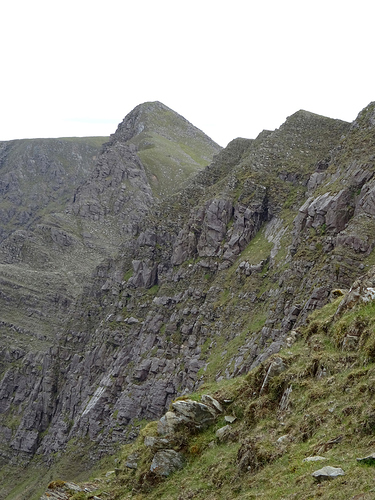 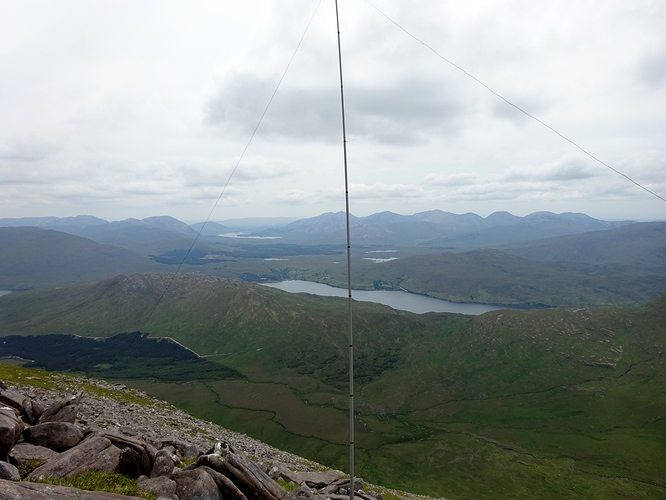 9th – 16th July, I was again on holiday in County Kerry, this time on the Iveragh Peninsula (Ring of Kerry Peninsula). The weather was reasonably favourable in the earlier part of the week and I got the chance for a number of first activations. We were based in Waterville, favourite holiday destination of Charlie Chaplin (and boy, do they like to remind you). For the record, the following summits got their first SOTA activations:

The first of these, Knocknadobar was a family expedition. The route we followed is a pilgrim trail, which zig-zags up the mountain with the stations of the cross marked at intervals by concrete celtic crosses and a large cross at the summit. The zig-zag nature of the route is only apparent from the summit – we opted for the bee-line route on the descent. My daughter, Isobel also joined me on 2-pointer, Bentee.

The two summits, IS-094 Killurly and IS-071 Bolus, face Ballinskelligs Bay and Skellig Michael Island, UNESCO heritage site and Jedi Temple of Star Wars fame. Although the area has become a bit of a magnet for sci-fi fans, none ventured to the summits while I was there.

Again, thanks to all the chasers who I managed to work, despite the poor conditions, particularly to Manuel EA2DT who saved the day with qso #4 on Bentee and Karl M3FEH who I worked a number of times. Below are some photos from this trip. Next up is a trip to the EI/IE region from 6th to 12th August. I will be activating some hills in the southern part of the region, from a base in County Wexford. This time, I plan to attempt some 2m FM/SSB using a small Yagi, as there should be a reasonable chance of contacts to GW/GK from here. I may also finally take the plunge and get the paddles out, given the recent conditions on HF! 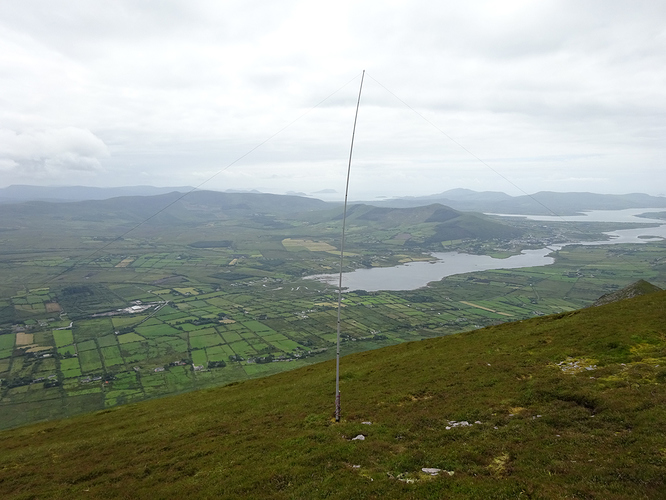 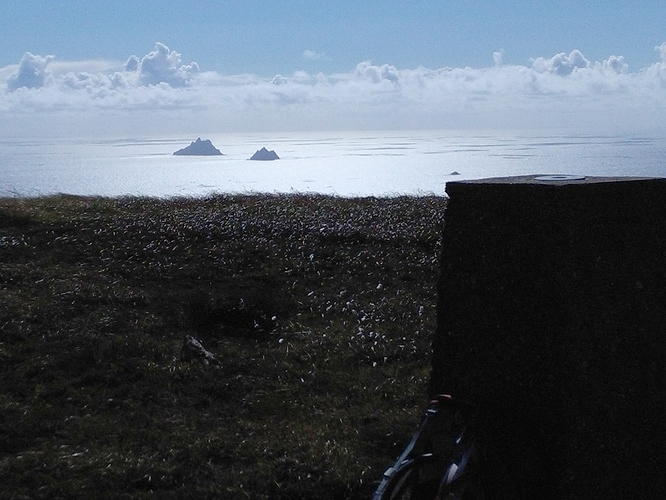 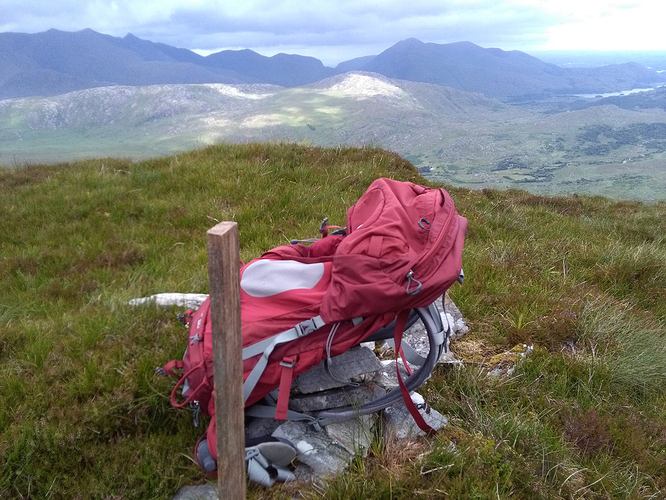 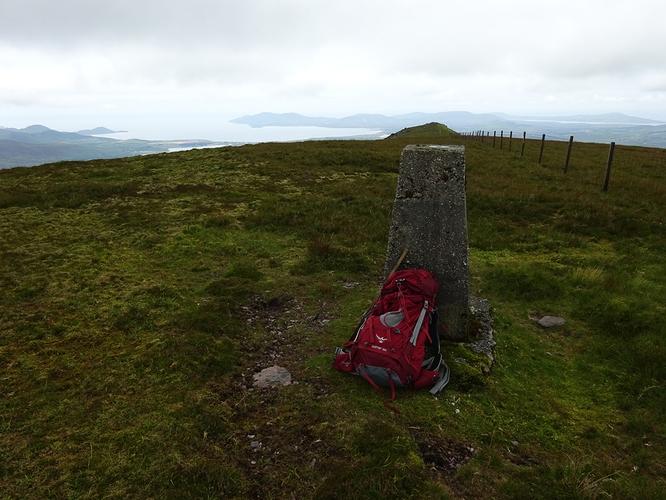 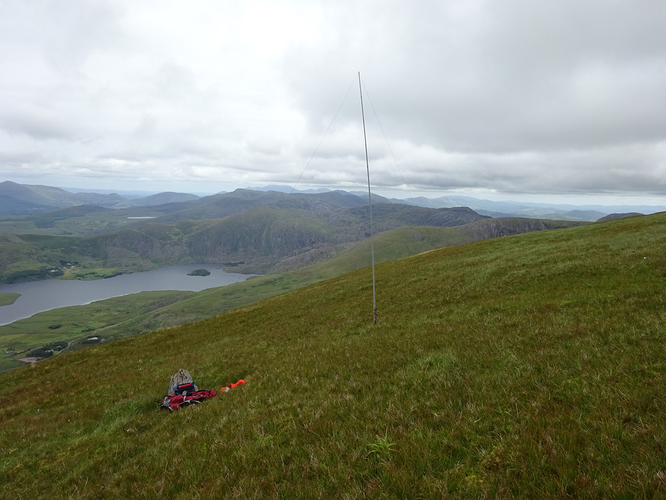 Did mange to catch you on a couple EI Sotas an thanks again.