Yesterday with my contract job completed in Colorado I set off East towards home in Ohio. I had big plans to stop in the Black Hills of South Dakota and activate 3 summits! Well Mother Nature was not onboard with my plan. A snow storm passed through the night before. Snow and Buffaloes everywhere! 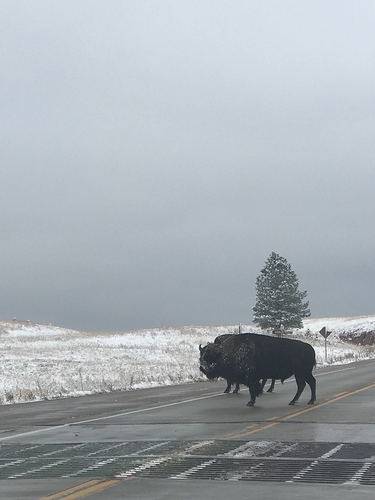 I set off for Rankin Ridge and hiked the short trail up startling a Buffalo laying still and covered with snow. He did not like my presence and took a couple quick steps toward me (they are bigger than you think)! Now on high alert I continued on to the summit and set up my VHF gear. 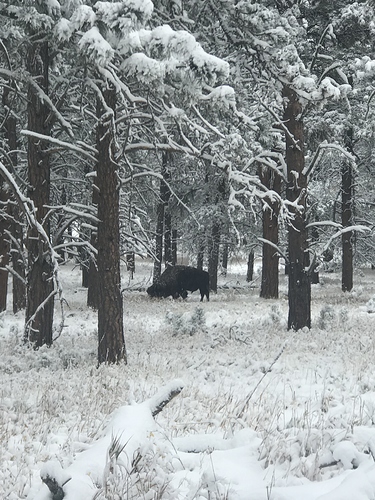 First 3 CQ calls were answered relatively quick and I thought “this should be fast!”

…2 hours later, cold and numb I stood in this spot begging for 1 more QSO. (I did hike down to the Jeep and warm up for 20 minutes during this time) 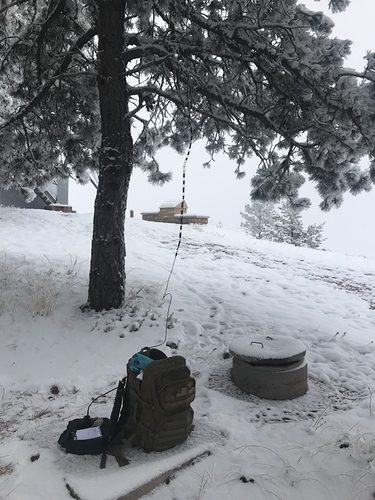 When I was just about ready to throw in the towel my HT lit up with a great signal report on 146.52!!!

I learned at the end of the QSO that the signal emitted from a relay station (I am not 100% sure that’s what it is called)? My heart sank! Is a “relay station” (not a repeater) considered simplex? I’ve never heard of this. I was not sure and the great ham I was communicating with said he would drive up a high hill near his QTH and attempt traditional simplex (Thank You AD0HL). About 20 minutes later I heard him call clear as day and he said I was on the closest edge of being readable but yes he did in fact say he read me direct simplex. We met again on the (relay 146.52 station.) where he did confirm he read my call.

Today was a great adventure despite only activating 1 summit!

He said he read you direct simplex, so the QSO is valid.

Is a simplex relay legal for a QSO in SOTA?

Probably not, it sounds like a repeater just without split input.

Is a 1/1 signal report sufficient for logging a QSO?

Well…there’s a can of worms that’ll open in a few hours about whether a 11 signal report itself is legitimate, but the fact is you worked the station direct simplex and he confirmed via simplex and later via the relay that he had heard you so it’s a valid contact in my book.

The 1/1 is my assessment on the chasers side. I’m basically saying he heard me just barely. I however had him 5/9.

Erik, with the greatest of respect, the positioning of that J-pole is severely sub-optimal. It’s far, far too low and it is buried in a tree. They need to be up and clear. You want the feed point to be 2m above ground as a minimum or the gain will be right down. Once you have it up high, you don’t want it buried in a tree like that as there will be lots of loss. Looking at the picture, you probably would have had a much better signal if you had simply stood in the clear and used the rubber duck on the handheld.

You can get 4m/5m fibre glass poles that telescope down to 50cm in length and easily fit inside luggage etc. and with your J-pole on that and you sat at the bottom holding the pole, the station will work better.

Taking the second question first, the database does not record signal reports, so as long as an exchange was possible then you have a valid contact.

The second question is less clear-cut. Repeaters are not allowed for SOTA, but there is no rule against a remote station, so if it was a remote then the initial contact was valid. There is debate about the validity of remote stations, mostly from people who have no need for one, so if this stirs up arguments again (how we hams like to argue!) just stay with the thought that what the rules say (or don’t say) at the time of the contact is what counts!

Good point about getting antenna higher. No offense taken about Jpole up higher! I usually have my hiking pole that extends ~2m and use that to snag antenna as high as I could reach but yesterday did not. I also wonder about snow having adverse effect on signal propagation?

I also wonder about snow having adverse effect on signal propagation?

It can have an effect. But until you get that antenna up high and clear don’t worry about tertiary effects when the primary effect is insufficient height and the secondary effect is local signal absorption. Solve those first.

It was a difficult activation primarily because you were radiating naff all signal to the horizon… the feedpoint was too low so the correct radiation pattern for a J-pole was not formed. As a result most of the signal was being absorbed/scattered by the ground and cancelling out with other radiated signal and the rest was going up towards the clouds if wasn’t warming up the sap in the tree.

A 2m Jpole is about 1.5m long and with it suspended from the top of a 5m pole, the feed is about 3.5m AGL. That’s a start. If you can’t get that kind of antenna high and clear you may as well use a dummy load! Or just stand up and use the rubber duck or an improved rubber duck

Also where is the choke in the feed? It really needs to be right at the bottom of the ribbon/ladder line otherwise there will be all sorts of radiation from the braid outer surface that will maybe make the SWR bad causing your TX to drop its power and interfere with the radiated signal causing more nulls and cancellations in the pattern to the horizon.

This design from M0UKD’s website shows how it should be. It’s for a 70MHz version (not a Region II ham band) so it’s basically twice the size of a 144MHz version. The choke goes right at the bottom.

(image linked from and © M0UKD)

And here’s what it looks like in use. Again this is twice the size of a 144MHz version so yours would be half this size which is a lot more manageable and hand-holdable.

(image linked from and © M0UKD)

Of course it will work to some degree when lower but VHF = high and clear, especially on the type of summit you were on. You posted a picture of a goat chewing you antenna, on that kind of rock/dirt ground you are, from RF point of view, floating hundreds/thousands of feet in the air and the antenna probably worked well even though it was mostly laying the ground.

You would benefit so much from getting a telescoping pole that is 5m long. As I said you can get them where they collapse to 50-60cms long which is easy to fit into luggage as I know you do a lot of flying. Maybe something like this: https://www.ebay.co.uk/itm/2-7M-7-2M-Glass-Fiber-Spinning-Hand-Fishing-Rod-Telescopic-Stream/383448683565 but do note they used a Chinese tape measure so they are a lot shorter than the claimed length! The 6m one should be about 5m as my 5.4m is about 4.1.

If you can make a few simple tweaks to your operating setup you should notice a big improvement.

Great info! I’ll read in more detail this evening. I believe my N9TAX Jpole has a choke installed near feedpoint. I’ll take a picture when I get a chance. always something new to learn!

I checked the antenna. It has a ferrite bead encased in shrink wrap about 3cm in diameter at feed point. I assume the ferrite bead is performing the same function as the loops in the feed-line?

Good points to ponder about the Jpole! I see that Where I’ve been activating (high points in the Rocky Mountains) my antenna has been sufficient even though extremely compromised. For lower areas I see getting up high will increase performance quit a bit!

Just some comments about KE8OKM’s activation.
The remote base that Terry (AD0HL) used in on the northeast side of Rapid City. It’s normally used for talking across the state on 2m. For SOTA work, it’s strength is that it is not in the Hills. Both Terry and I live on the west side of Rapid City are are generally blocked from weak contacts by the hills around us. I live in a bowl that opens to the north, for example, so chasing from my house is difficult.

We have a small group of SOTA enthusiasts in the Black Hills area, mostly on the northeast through southeast sides of the Black Hills. There are a number of easily accessible peaks, which makes it a great stop if driving through this part of the country. If you’re doing VHF/UHF only, life is a bit more difficult. Your best bet is to let someone know you’re coming so we can round up some chasers. Bob (K0NR) and Joyce (K0JJW) coordinated a trip with us a few months ago. We made a two day event out of it, coordinating with two local clubs. Three of us went out to local summits for some S2S work. We all had a great time, especially in these days when not a lot else is going on. Your other option is to use the local repeaters to drum up some chasers. We have three linked VHF repeaters that cover most of the Hills and a number of unlinked ones. You can find repeater info at www.w0blk.com. Once someone hears an activator, phone calls usually go out to find chasers. You can also email me (K0DAJ) before your trip if you want. You can find me on QRZ. This is great area for SOTA. I counted 181 peaks in western South Dakota and the Black Hills of SD and Wyoming. We’re a bit isolated, but there are probably 100 active hams in the area. We’re happy to support SOTA visitors!