This is one I’ve not done before, from Tom’s report there looks like there maybe a little shelter from the predicted winds tomorrow.

Not sure about the parking situation either, so if we can’t get in, we may drop onto Watch Hill G/LD-054 and try the parking there as neither myself or Chris have done that either.

It’s a bit of a drive to the north of the county, so best guess is to be on around 11:45 local time.

What a great day out on Binsey.

Talking to Andrew, he told me this was a carpet slippers hike. Well it would have been two steps forward and three back if I hadn’t taken my boots. But yes, there is a very well defined grass track almost to the summit. Just one boggy bit on the way up. From the parking spot you can’t tell the height, but when two souls popped over a ridge we could tell it was going to be a wee bit higher.
Just about all the parking was taken, but just was we pulled up someone pulled out , so a good a start.
This hill is obviously popular locals and not so locals as awalking spot. We passed many on the ascent and they all said hello, which has been a bit rare this year.
On the summit spectacular views of the Solway coast emerged and looking back to the Lakes very dramatic views with menacing black clouds and rain (very much like a Turner painting), which luckily never came our way.
Temperature was approx 12c with a brisk wind, we were in sun 50% of the time, but after sitting on the radio for 90mins I had quite a chill.
It took a while to find the satellites and I was a bit later on frequency than I had planned. I thought I was not going to make it as either Blencathra or is it Skiddaw where right in the Line of site of the Satellite.
As we got to the summit we found G(M)4VFL/P on frequency and we worked him for the S2S.
Once the QO-100 kit was setup I worked Andrew direct on 13cms, and then swung the dish around and one of my now regulars was on my usual QO-100 frequency keeping it warm for me Thankyou Phil. I worked him and then Andrew for a nice QO-100 S2S.
I then worked one of my other regulars G3VKV and another 11 stations, G,IT9, YO,DF and SA. I was kept continuously busy for a full 90mins, so much so my battery got exhausted and had to go QRT while still being called.
It was so nice to be so busy on the Satellite. A few asked for the SOTA reference and some said they are working on portable setups. So next year might see more SOTA activity on this mode.

Thanks all so much for coming up on frequency and Andrew for the S2S. 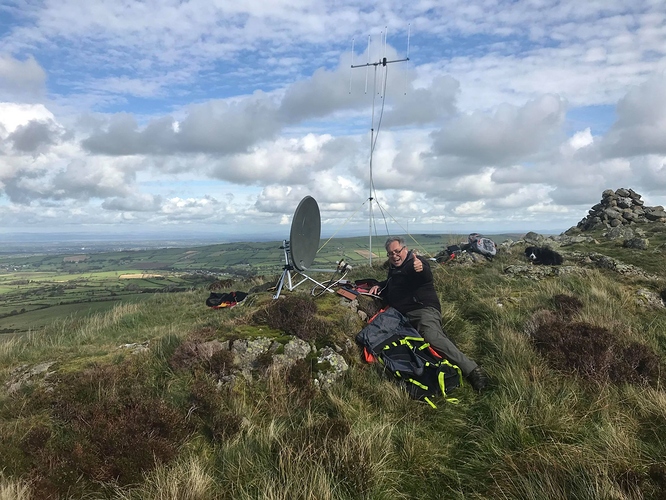 Better wx than the soaking I took on there a couple of weeks ago Nick.
Still waiting for the LNB to arrive, everything else is ready.
73
Tim
G4YTD

Many thanks for the QSOs P2P and via QO-100. Here is the other end with the Green Lowther radar in the distance. 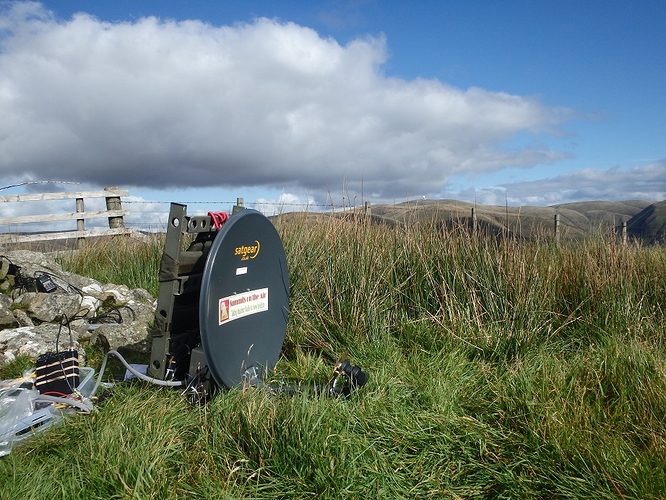 I hope it arrives soon,

I look forward to working you.