I’ve only done this once before and up the long slog to the transmitter site on tits dedicated road.
Tomorrow I’m thinking of tackling it from the parking spot on the A685 close to the M6, it looks short but steep. That QO-100 kit doesn’t get any lighter.
Chris M0KPW is taking his 2mtr kit, it’s not a particularly good take off from there, but looking at past activations it’s quite workable on “Two”

I drove my car up to the second transmitter site and walked from there. When I activated Grayrigg Forest last year there were no signs forbidding vehicular access. But your alternate route looks fine if not blocked by field boundaries.

I’ll report back on this route.

Yes please, I’ll probably do it again and by that route if possible.

I can see on Google Maps satellite view what looks like a path running roughly North East from the summit towards the A road. At the other end west of the lay-by there are tracks running on both sides of Burnes Gill but I can’t see where if anywhere they pass through the drystone wall running roughly north-south.

I decided to change the route up a bit. I had intended to go from the Viewpoint/parking area where the A685 is close to the M6 on the east side of the fell.
But we went from the S.W. route up. We parked at the junction of the A685 and the B6257. There is room for about three vehicles here, but there are a couple of laybys near by on the A685 with room for plenty of cars, so there should not be a problem parking for this fell.
We headed north for a couple of hundred yards on the A685, here you find a farmers gate into the field.
This may well be private land, so you take your choice is you want to do it this way. This field had just been planted with Oak and Rowan in several area’s. We walked up the field heading for the top plantation where there is a gate on to the fell itself.
Once on to the fell, head northwest to the summit.
It is 1.3 miles in total and about 250mtrs of ascent. There are no discernible tracks. I tried to look for tracks from the summit up from my intended route. There appears to be one along the ridge, but my eyes were smarting so much from the wind it was hard to make out.
It was quite a bit windier than I had anticipated so it was a bit of a smash and grab, working just six on QO-100, five that I had worked before and new DL9.
Chris did well working 21 stations on 2mtrs F.M.
The fell had a much better take off than I remembered. While up there it was impressive to see two jets pass hundreds of feet below us following the route of the M6. 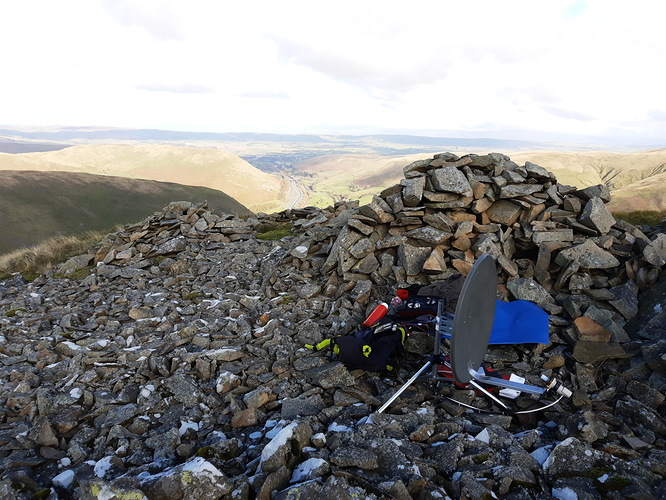 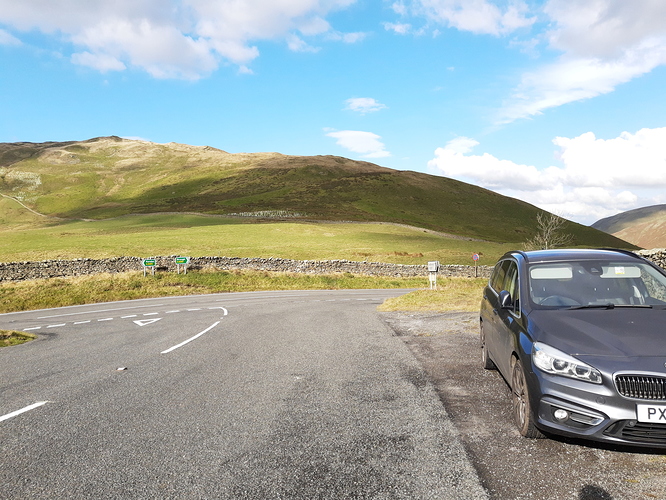 Thanks for the route report Nick - one I still have to do. Thanks also to Chris for all the recent summits.

This may well be private land

It’s probably nearly all in private ownership. But vast areas of the Shap Fells are open access land [Countryside and Rights of Way Act 2000] and you probably entered directly into it [pink bordered area on map below]. 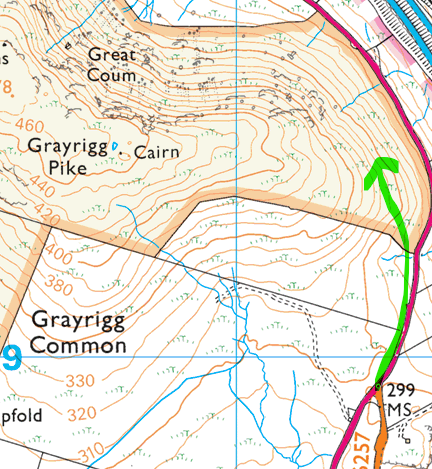 It’s also in the Lake District national park and I think landowners are pretty tolerant with hillwalkers - though I so rarely see them I haven’t personally tested that.

Thanks for that map, I would say that we were on private land then as we were in that rectangular area bordered by the wall. But as you say, as long as you behave I guess they will be tolerant. If anyone finds out more, I may post on here.

Only the sheep will care if you entered that non-CROW field and only then for 30 seconds whilst they trotted away from you.