Firstly a huge thank you to the SOTA MT on my behalf. I wasn’t involved in the organisation of this event, however I did make sure the participants involved saw lots of radio on the mountain tops. DX-15 - an event organised by the RSGB Youth Committee to promote amateur radio to the up-coming amateurs in our hobby. The event was sponsored to my understanding generously by SOTA, the RCF and RSGB. Kenwood supplied equipment for the event and sponsored it as well. We had nine youngsters, well 8 youngsters and one old one at the event (me) + Mark M0NCG + Mike 2E0MLJ and the Camb-Hams !. The shack was based at the foot of Waun Fach (GW/SW-002) in a large bunkhouse with the front dining room converted into a radio room. The camb-hams had joined us with Flossie and by Thursday afternoon we had full band coverage on 80 , 40 , 20 , 15, and 17 meters. The callsign for the event - MC0RYC. 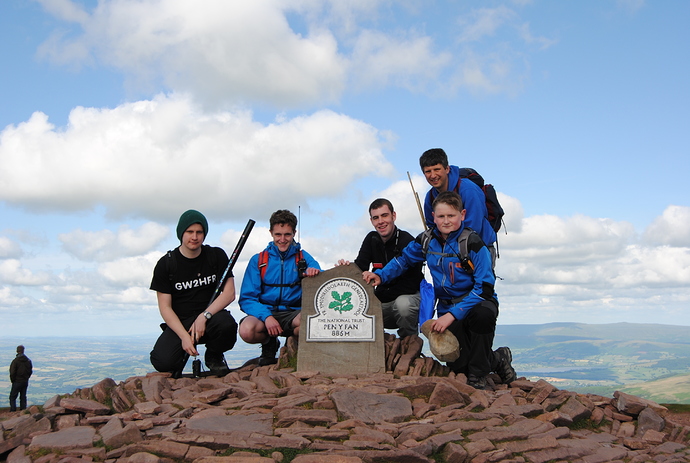 Dom (Camb-hams) MW0BLF - Standing. Me on the left, Josh, Mike, and Taylor.

Activation equipment was somewhat spread out, with the most common item being the humble 2m/70cms HH, I had my KX3 and associated activating equipment from many previous outings. Rob MW0VFC had his also. The organizers had bought a wealth of equipment from SOTABeams, which throughout the week I had the pleasure of using and taking some of it home. One can never have enough linked dipoles !

Started out from the standard route at the side of the A470 and took the very boring plod up the National trust path. Rob elected to take a slightly larger group up GW-SW-009 at the same time for the s2s, this was much closer to the bunkhouse. The TXFactor elected to go up the bigger one with us, having a camera on you is a somewhat strange experience. I think they went away happy to the pub afterwards…

Numerous locals made the 2m contacts - too many too mention! HF the rest made it on 20m, 40m was hopeless. The weather was perfect, but the sky was pretty broken.

Rob VFC was taking most of the children through bracken high enough to almost make them disappear up to the top of GW/SW-009 (Mynydd Troed). I went up this on the following Tuesday night to have a go in the 6m contest which proved to be great fun, including a nice rag-chew with Tom MW1EYP/P on Cadair Berwyn. I can not put too many words to this activation, but the smiles seems to suggest fun was being had. 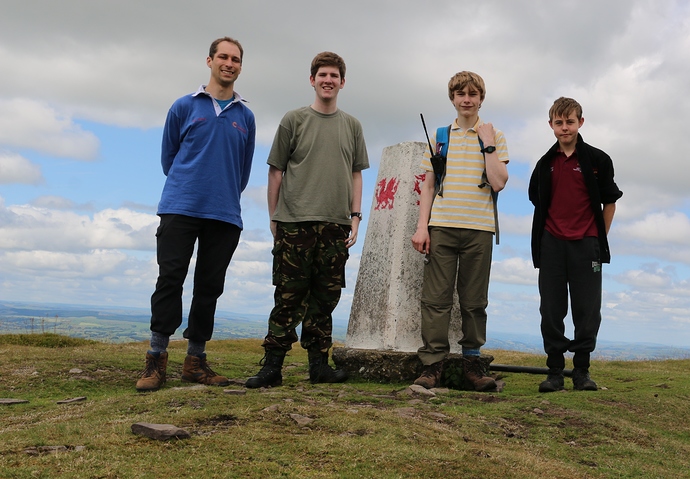 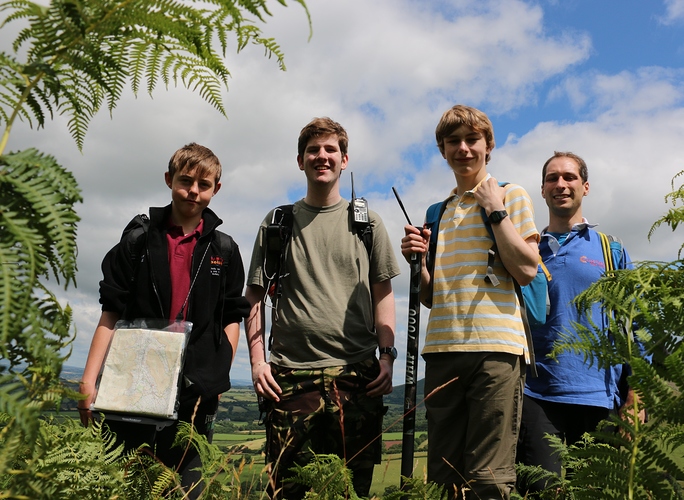 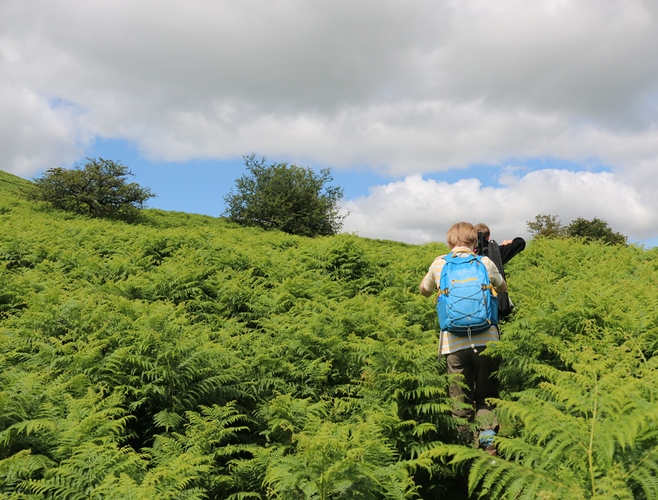 I wish I could run to the summit !

This was a slightly wet one, Rob had got slightly stuck behind with Will 2W0WOD on mid ascent upon crossing the top plateau I lost contact with them on 2m, we pressed on to the summit with me now currently monitoring the groups safety in thicker mist. All of the nine had came on this one activation, we combined later on with Rob taking a slightly different route to the trig point.

After SW-001, I had given up hope with 40m and went straight for 15m. I managed to bag my four. Will eager and young took the mic to gain a few more. 15m dried up and a prompt link switch to 20m ensured the rest of the group got four each. Some opted for 2m and a mix of HF. G0LGS made good work of getting each operator on 2m. The themed Joke was this should have been a IOTA activation … rather a large puddle. 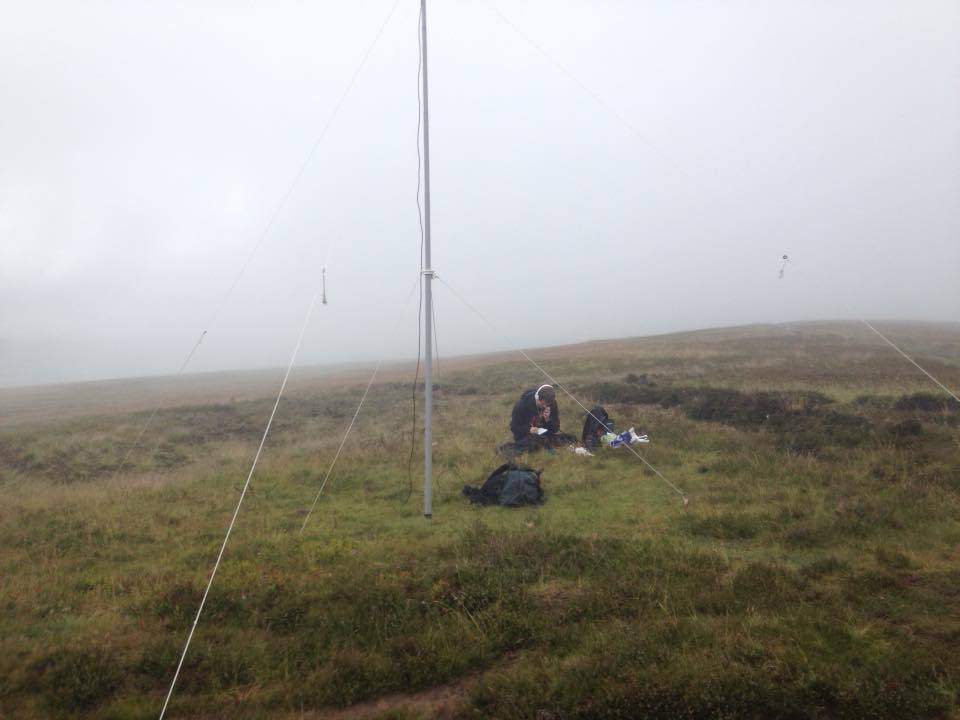 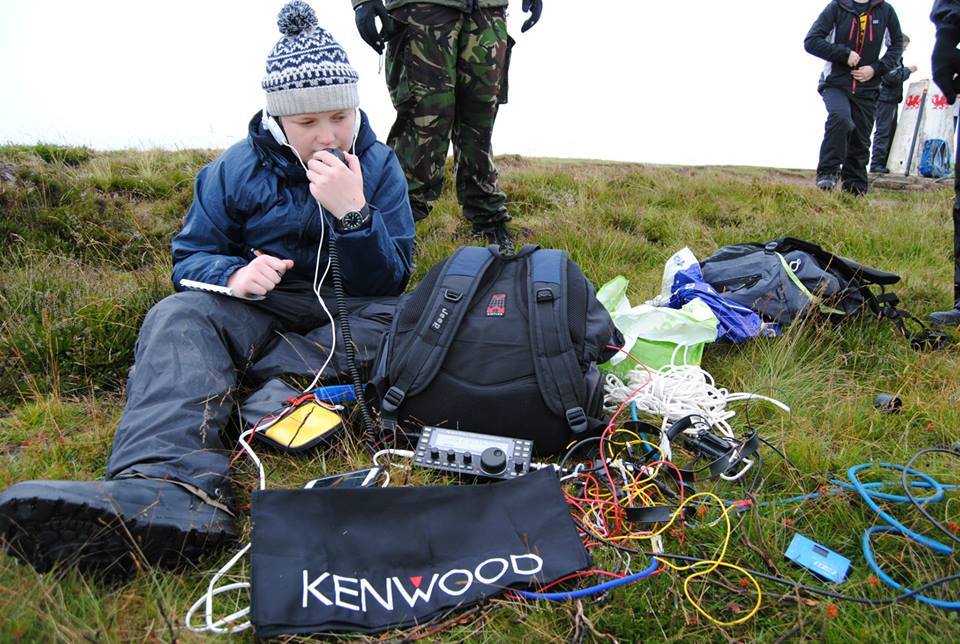 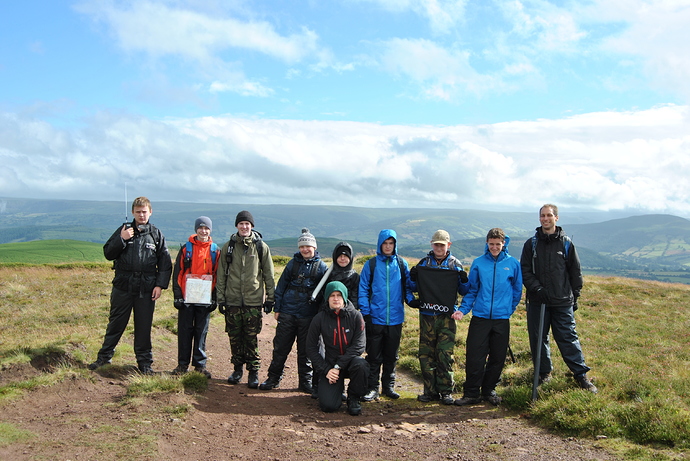 This was to be the last SOTA activation of the project. Again me Rob and Dom attended this. Connor and Josh came along. So the adults out numbered the teens on this. The bands had improved and local skip was now working on 40m. I worked four on 12W then immediately gave the mic to Josh so that he could qualify. Connor was with Dom on the other KX3 on the 20m band, Rob had a quick go on the key so that he could qualify and Dom followed. Job done, short and sweet. 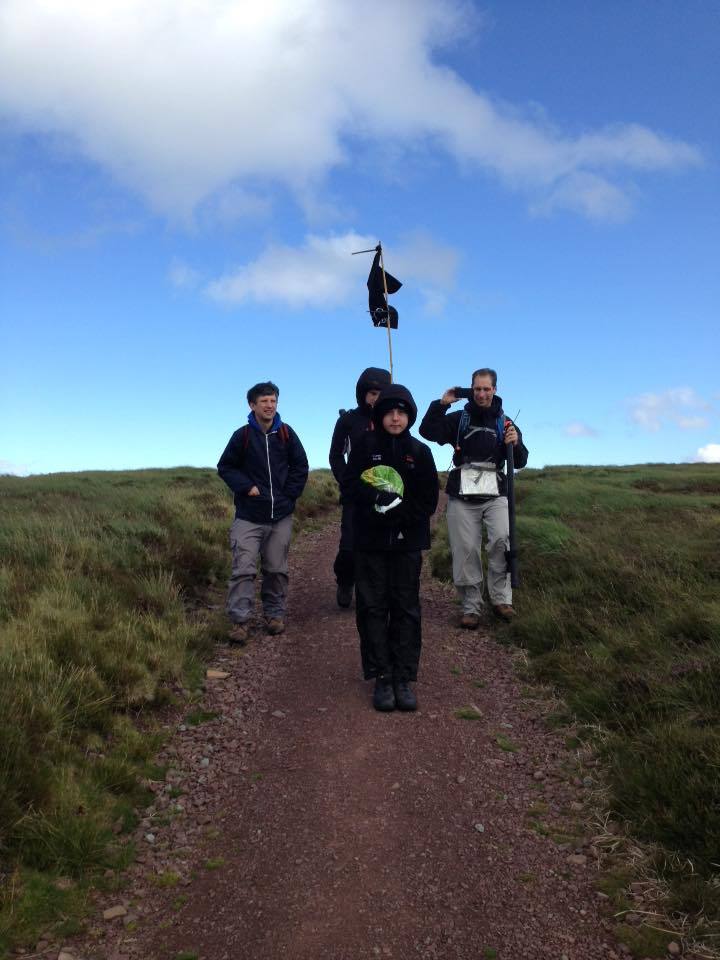 Some other non-mountain photos. 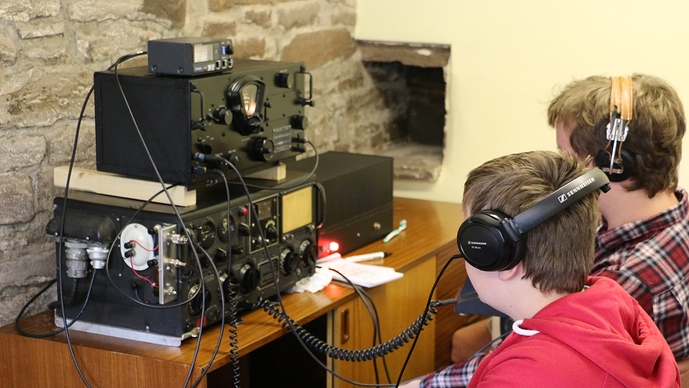 The ART-13 has been on the air for roughly 3 weeks before this event. The Collins Autotune still brings the transmitter within 50 Hz of its set operating frequency on AM. One side of the hobby that is not often experienced with modern transceivers. It also made a brilliant sock warmer after SOTA ! 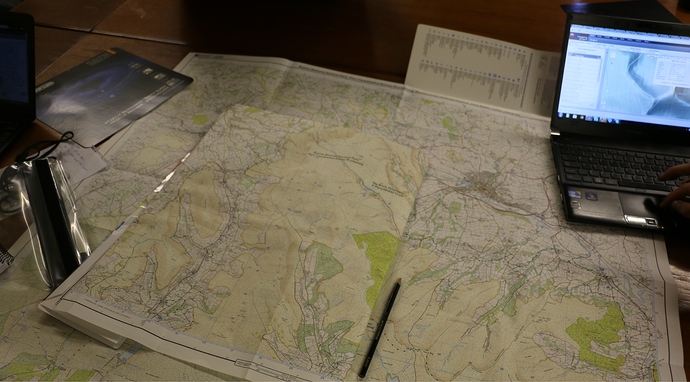 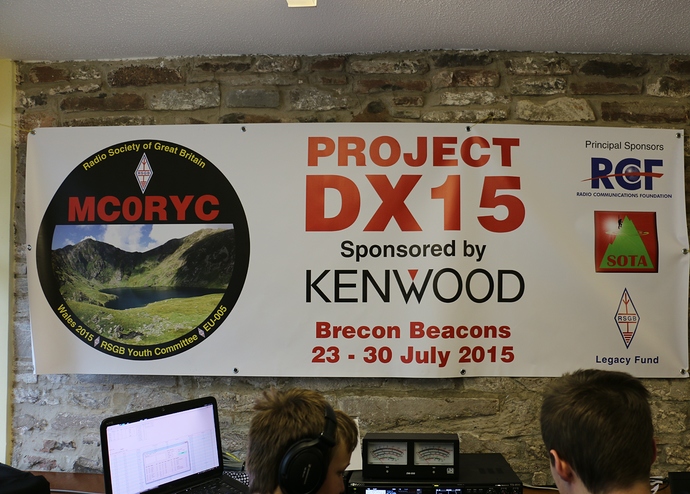 Operating played a large part with the pinnacle being the IOTA contest. Construction, antenna building, washing-up and every other amateur group activity was experienced. Hobby at its best IMO.

Just my take on the weekend. I will remember this event for a long time, very tiring but worth every minute. SOTA made a big impact to the enjoyment of this event and I am sure it has encouraged some younger people to chase and activate. Is amateur radio dying as an interest ? not if this week had anything to go by.

Great Pictures and report Jonathan,
I listened for the groups when they were spotted a couple of times but unfortuantely never quite made a contact with them.

It’s was a shame the 40m conditions of late been so horrible.

But reading your report and seeing the pictures of young people enjoying the out doors and the radio and not glued to there phones or there play stations.

My god must be getting old moaning about the young nowadays LOL.
Just think these could be future activators to keep us older one,s happy because some one young enough to still able to go up these summits…

Well done to the group

The weather seemed aggreable throughout as well.

If only the RSGB had had something like this when I was first licenced at 15! It would’ve been a great laugh and of course would’ve been very helpful in learning more about the hobby.

The most satisfying part of the event was seeing that there is hope for this hobby yet. I got more enjoyment showing how much fun is involved with radio then actually doing any activities for my own benefit. Worn out indeed !

The IOTA contest has completely changed my opinion on contesting. Observing the rapid propagation shifts on 40m between the US and Europe late on in the morning was very interesting.

40m has been bad, but it does rise. I try and aim for the best time of day. I am going to move onto 60m now. I am sorry that won’t help you Karl.

Hopefully there will be more of this stuff happening in the future. I will certainly do my bit to make sure it does. Yes the weather was challenging at times.

Hi Jonathan,
Am I right this was organised by the RSGB Youth Committee? Why don’t some clubs step up to the mark and organise some outside activities (SOTA is great but any outside /P operation or foxhunting would be good as well) and then invite all youngsters that want to come from the area (i.e. from other clubs in the area as well, not just radio but youth orientated in general). We could end up with youth events happening regularly, like radio rallies - just a thought!

I second your point, that there’s hope for the hobby when people get involved. We do have a fun hobby - it’s time we started shouting about it!

I think its all in the pipeline. The problem is most us that are really into amateur radio around this age are spread out. So this event has allowed us to come together and get to know each other. I think the RSGB has got more planned in 2016.

The interesting point from talking to them is most of them got their licenses with their Dads, which was the same in my case. I think it certainly enriches the experience and enthusiasm at a young age. The fact that three of them could send CW impressed me the most !

In my case I got my licence through the local club (many. many years ago) but the Interest was there though my brother having his licence and the scouts led him into the hobby.

It’ll be interesting to see what other events the RSGB promote and good on them for doing so, but I believe that local radio clubs hold the major part of the responsibility (and ability) to run these kinds of events for youth.

OK, better get off my soap box and go out and test some SOTA gear.

Congratulations Jonathan on all the hard work that you put in with the youngsters. It was people like you that got me interested in Amateur Radio back in the 60’s and helped me develop my enthusiasm for the hobby, something that has never diminished. Because of the encouragement that I received I got my class B at 14 and by the time I was 16 I was a class A licensee and doing CW at 25 wpm.

You should be proud of yourself - well done.

Mark - M0NCG did a wonderful job cooking and keeping the domestic stuff in order, it was very much a team effort all round. I just hope more of this stuff will continue, maybe on a smaller scale with clubs as Ed suggested.