My FT817 turns 21 years old in a couple of months! I guess it should qualify as a retro rig?

Another vote here for the FT-290R Mk1 as the definite old skool SOTA rig. Mine had the Mutek preamp and with a Microwave Modules linear and preamp it was quite a potent combination. I sold the 290 many years ago after purchasing an 817.

I’m pleased SOTA was not invented 20 years earlier otherwise I’d have had to carry my Trio TR-7010 up every summit. It did get taken up Kinder Scout G/SP-001 for one of the microwave contests, complete with an aluminium pole, 5 element beam, 10GHz wideband transceiver, 45cm dish and 34AH lead acid battery. No problem for an active 30 year old.

It’s a bit of a testament to modern design, manufacturing etc. that you can make a piece of such electronics so cheaply (in real terms) that stays functional and in spec despite the rough treatment such radios gt in SOTA service.

There was one on eBay the other week that went for a surprising price considering what it is. Yes I did consider bidding.

Which one will I use to chase you? 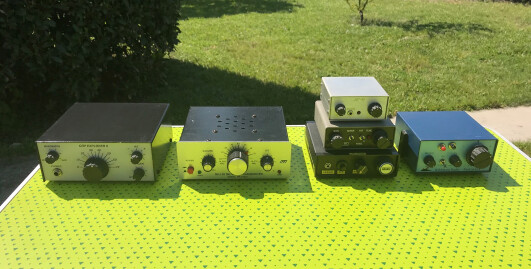 They were used for electronic counter measures by NATO troops as they had power out on so many frequencies.

LOL! It was widely used for a while and gave good results whatever its defects. You still see them advertised from time to time but their time has passed, I wouldn’t buy one for the sake of nostalgia, though I might be tempted by other classic rigs. Actually, tho’ off topic, I’m looking for a nice clean Eddystone receiver…

There was one on eBay the other week

I still use my 1976 vintage rig, bought on the never-never. It has worked over 250 locator squares… not bad for a mobile.

Another 7010 passed through my hands a couple of years ago. I bought it for 50, sold it for 50. That one now lives in a vehicle up in County Durham, the replacement for a Liner 2 that had expired.

Maybe I should take one out this weekend ? 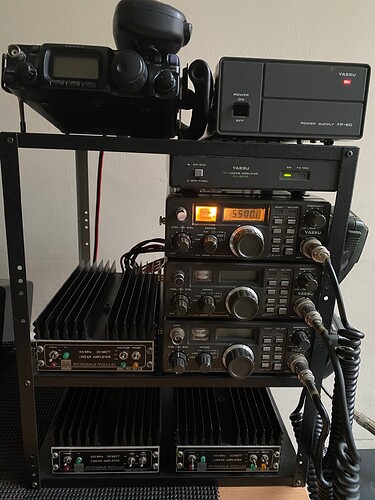 Maybe I should take one out this weekend ?

That would spoil the look of that lovely set-up!

No, I have another spare 290 to take out

So what does anyone think? A retro SOTA party using rigs from the 90’s and 00’s? 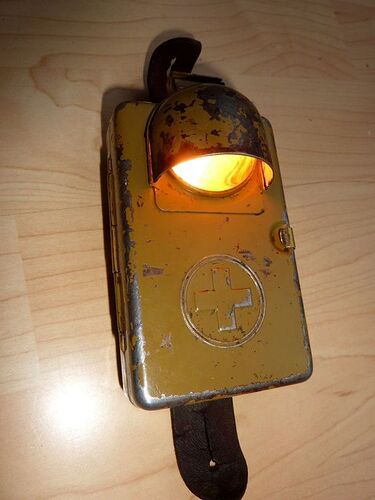 I first became acquainted with morse telegraphy in the mid-1950s together with my brother, when the father took us to a scout meeting, where they also used morse code in the evening in the dark, with army flashlights with a button contact.
From then on, my brother and I used a flashlight to wish each other good night before we went to sleep (in the same room…).

The next steps were then the pre-military morse courses, the compulsory recruit school of 17 weeks (electronic warfare), obtaining the radio telegraph operator’s license and, after completing the studies, applying for a call sign and buying the first radio station (with self-earned money. …).

A list of all the devices I built myself during this time would go beyond the scope here and I would certainly not have enough space at home.

Because I think that flashlight QSOs are definitely part of the nostalgia and no longer have the same appeal in our time, I will probably not participate here, hi.

Erik, we could have a SST to STT QSO or a Norcal to Norcal QSO

@M1BUU: A SOTA retro activity week has a certain charm…

I have an Icom IC2E from the 80s but that is for 25kHz channels. I know the 12.5kHz channels aren’t used much but I wouldn’t want to splat over someone else.

My first HF rig was a valve Heathkit SB101. I bought it secondhand in 1983. I think it was probably of late 60s vintage. It was not the most reliable of kit! I gave it away when I lost interest in radio in about 1990. Even if I still had it I wouldn’t have wanted to lug it up a hill along with some means of supplying its HT.

Even if I still had it I wouldn’t have wanted to lug it up a hill along with some means of supplying its HT.

Old skool rigs could be used by chasers, too. Old skool to old skool would be kool!

I have a SST-40 also. Only old skool rig I have now, as I don’t really collect old radios. But the SST is such a nice design and a very usable radio. You can see from the design and style of manual by N6KR that it was the beginning of Elecraft. I would build another one for 30m if I had the time.

I will take it out this year, even if we don’t have an activity day.

So what does anyone think? A retro SOTA party using rigs from the 90’s and 00’s?

I was just thinking about rigs likely to have been in common use in 2002.

My first HF contacts were made on a Sommerkamp (Yaesu) FT902DM. Just goes to show that older gear was still in use. I loved that FT902DM, it was the GX0KRS club rig and was regularly serviced by G3LLL. I was gutted to learn after the fact that the rig was sold off to be replaced by an FT897. I would be proud to be the owner of that rig.