Tomorrow, 27. November, a group of hams from OH6AD, The Amateur Radio Club of Central Finland, will go to Kiiskilänmäki, OH/JS-016 and activate it on various bands during Saturday and Sunday. We will leave from Jyväskylä at about 0700 UTC, and we intend to be QRV at about 0900 UTC, first on 80 meter band to invite new chasers from Finland and after that also higher frequencies, to make contacts with hungry chasers everywhere.

For many of us it will be the first SOTA activation. I will place a few alerts, but expect to hear different calls, including OH6FQI, OH6FME, OH6KV, OH6FKI, OH6FJA and OH6GKJ, so make sure you log the contacts to the correct call. The weather forecast is currently showing temperatures between -14 and -20 for the two days, but there is a small hut on top of the summit that can be heated with wood, so we can operate for the planned time.

I hope to hear many of you up there on some band!

Here is our planned schedule:

We may be able to self-spot and/or use APRS as well.

Our trip to Kiiskilänmäki is now over, many thanks to everyone who chased us during the two days!

It didn’t start very well. One participant had to cancel because he woke up to bad migrane. It was planned that he would bring some feeder cables and other equipment, which we now would not have. When we heard about this, Jussi, OH6FKI, Antti, OH6FME and I were already halfway to the target. While discussing this in the car and over the 2 m repeater, I somehow managed to mess up the car navigator, which then guided us on quite a detour… We ended up driving some small gravel roads and arrived at the summit over an hour later than planned. That meant we had to skip the first 80 meter activity.

After carrying the gear up from the main road, we managed to put up Jussi’s OCF-dipole, to be used with his FT-897 and my adjustable dipole for my FT-817. On the summit, there is a lookout tower and a “kota”, a small cone-shaped hut. We hung the feeding point OFC-dipole in the top of the tower and brought the ends down to some trees to make an inverted-V configuration. The dipole found its place between two trees. The station was set up inside the hut. Many local hams visited our station and helped with the antennas and other arrangements at the site, for example Seppo, OH6FJA, Seppo, OH6GKJ and Heikki, OH6MPN, many thanks to them.

We started the activation on 20 m SSB and 17 m CW. Because of the CQWW CW contest we decided to stick to the WARC bands on CW. GPRS coverage on the summit was shaky at best, so initially we couldn’t self-spot at first. But the chasers heard our call anyway, and we got the business going. There was severe interference between the rigs in 20 and 17 meter bands, so we had to take turns. When 17 meters started to quiet down, I adjusted the dipole to 30 meters and that reduced the interference to an acceptable level.

The temperatures ranged from -14 to -20 during our stay at Kiiskilänmäki. There was a place for a bonfire in the middle of the hut, but the hut was a bit too large for the fire to keep it warm. It was nice and warm right around the fire, but in the edges of the hut the temperature stayed below zero. The planned 2 m and 70 cm activity from the top of the tower had to be dropped. It was way too cold to operate up there because of the wind. Jussi managed to make one QSO from the tower using his handheld. The rest of us could listen to the conversation in the hut and make the log entries for him. We did however make some local contacts on the 10 meter band on Saturday night.

The night was quite cold, but we survived without any frostbites thanks to our decent sleeping bags. On Sunday morning I worked 10 and 17 m CW and Jussi worked 80 meters SSB. Some local hams had spread the word of our activation to other Finnish hams and Jussi had QSOs all around Finland. Most of them got their first taste of SOTA chasing. Maybe some of them will also try it again in the future. At about 10:00 UTC we started packing our equipment and carrying it back to the main road.

We also took some pictures, I’ll post them here later.

Here are the photos: 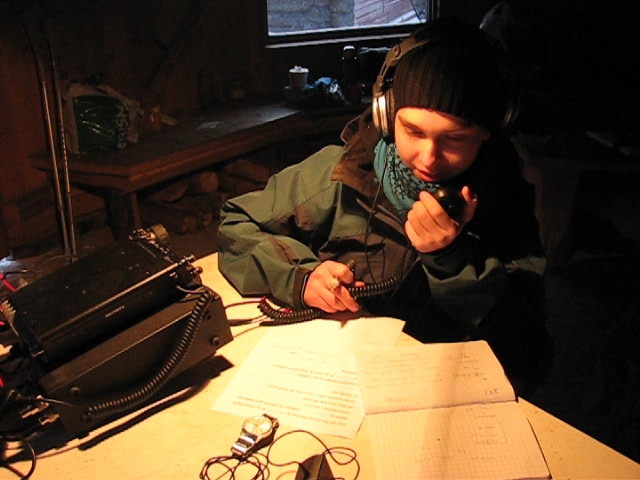