The gang of 4 (Franz OE5FSM, Dieter OE5DZL, Karl OE5JKL, Peter OE5AUL) usually arrange to activate the two summits (OK/JC-001 and OK/JC-003) along the German/Czech border during a 1 1/2-day outing in January or February every year.
This year they invited other hams to join them and I had the honour of being part of this expedition for the first time.
We activated a 2-pointer (OE/OO-379 Hochbühel) in the middle of a forest on the way to the border where stayed overnight in a small inn.
In the next morning we set off to the starting point near Dreisesselhaus and walked on skis along the German/Czech border to Trojmezi (Dreimarkstein) where OE/DL and OK come together.
As you can see from the pictures the weather was quite unpleasant: very windy and foggy.
After about an hour (most contacts on 2m, but also 20m SSB and 40m CW) when all of as were pretty cold we walked back to Dreisesselberg (OK/JC-003 Trístolicník), activated this summit and had a nice meal together before we went back to our cars.
See for yourself: 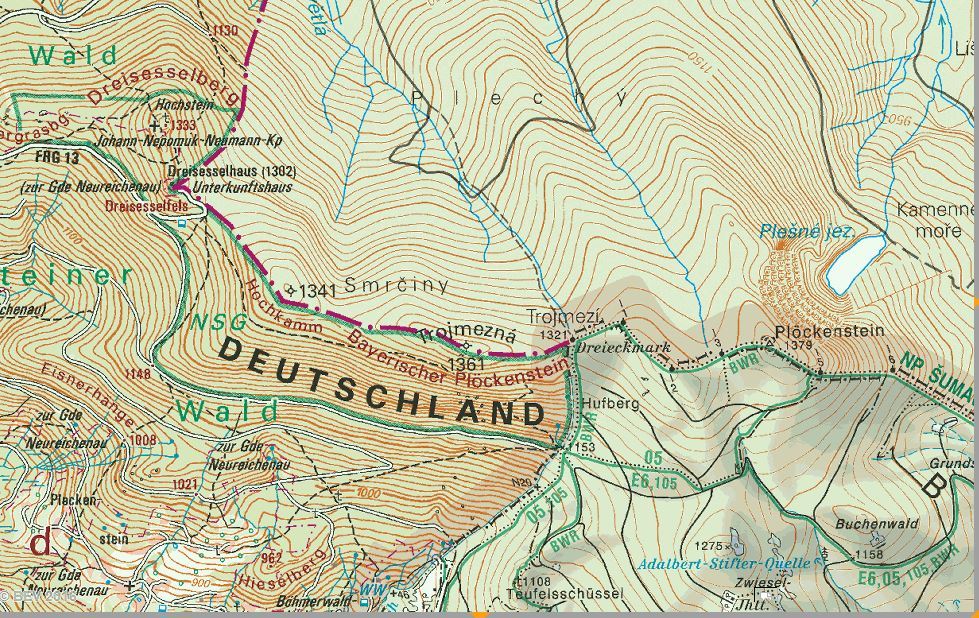 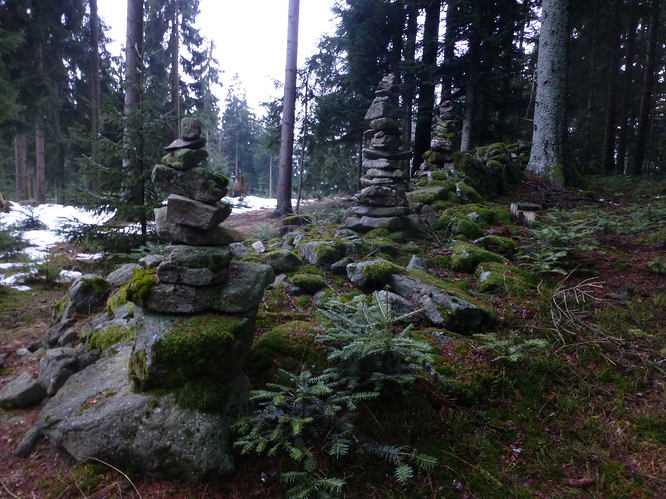 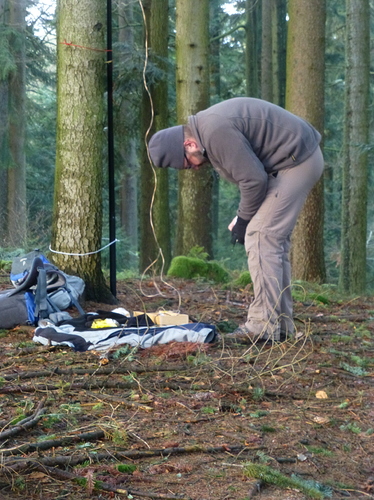 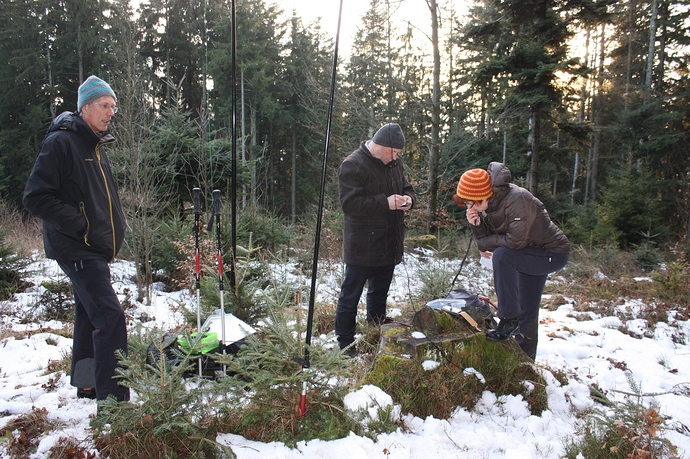 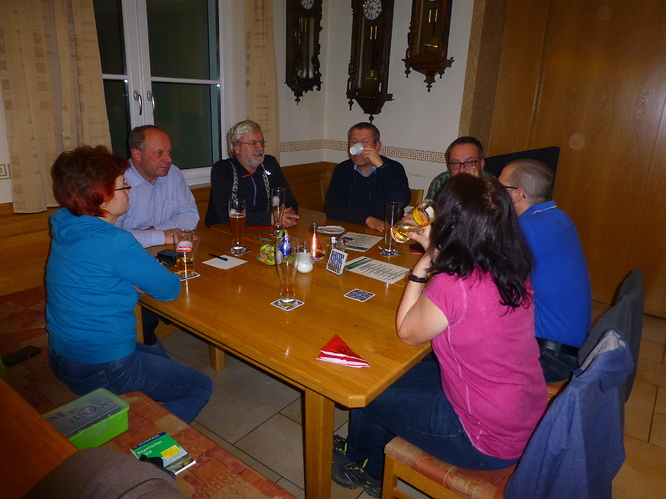 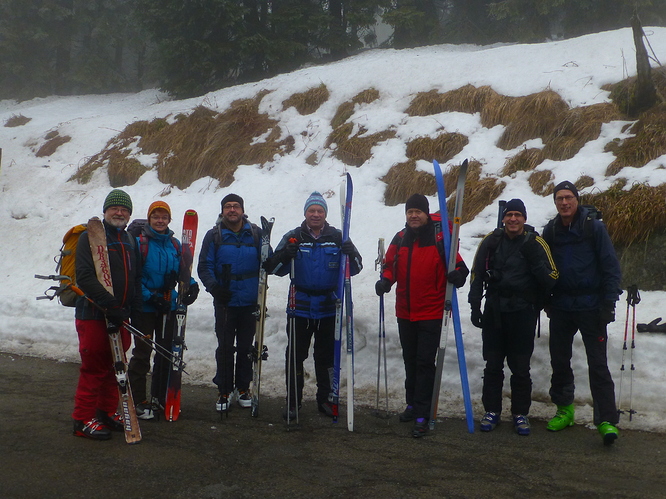 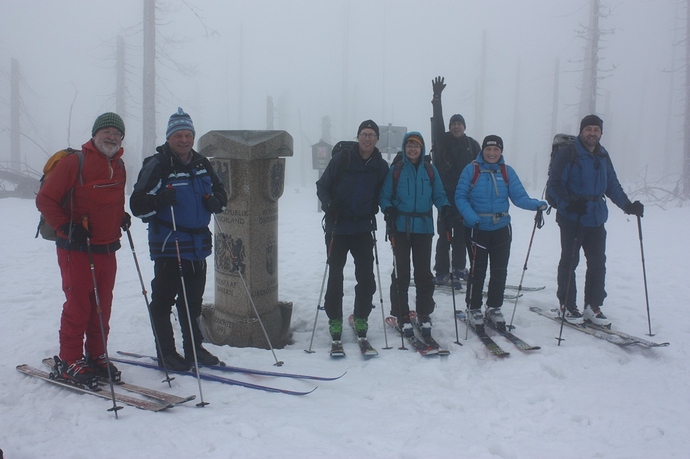 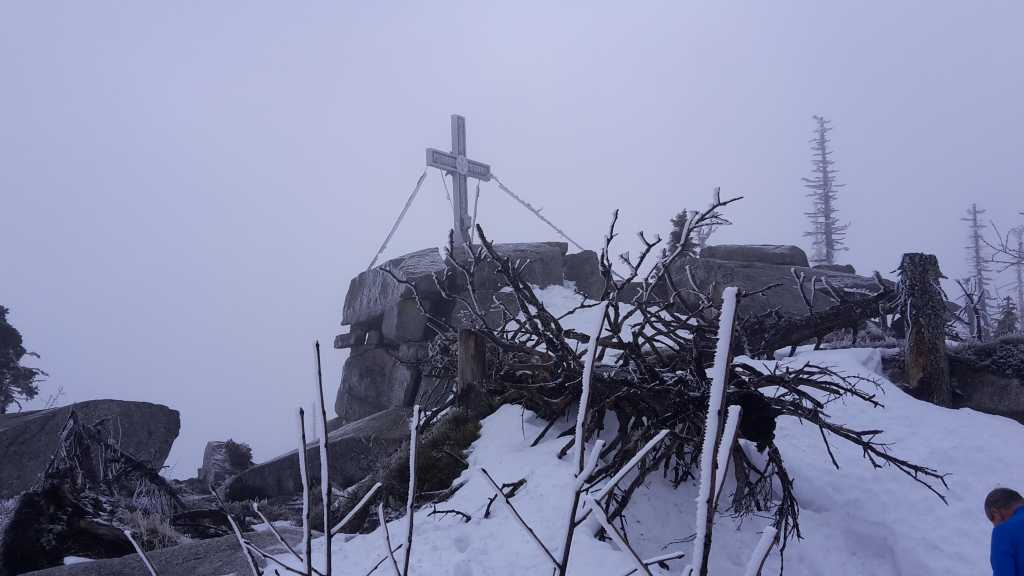 It took us 1,5 hours to reach Plechý.
(By the way: this summit used to have duplicate references until the end of 2015. We decided to give up the 4-point OE-reference in favour of the 10-point OK-reference) 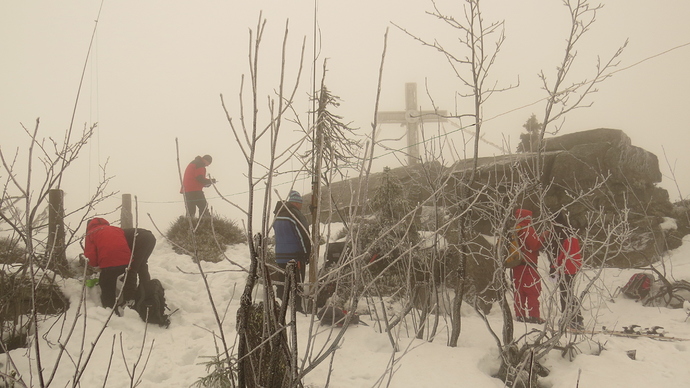 Multiple activities of 7 SOTA activators ;-)) - required a bit of coordination… 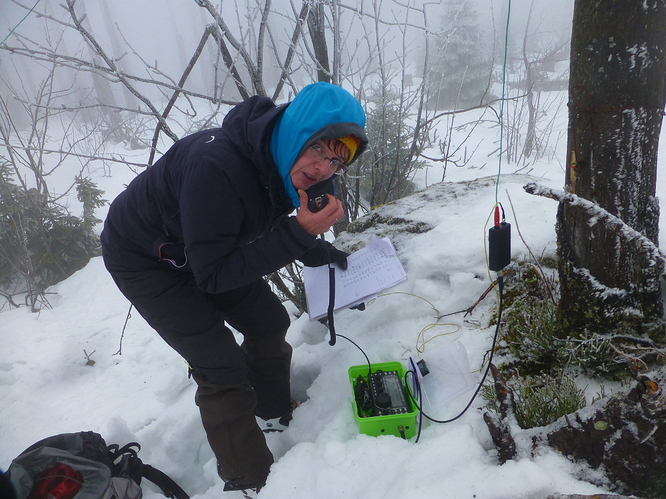 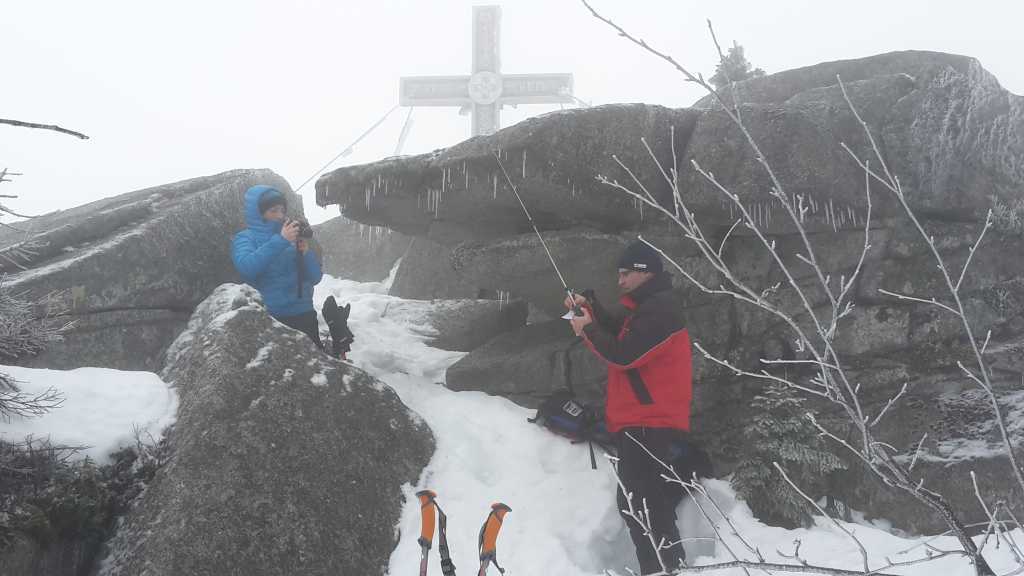 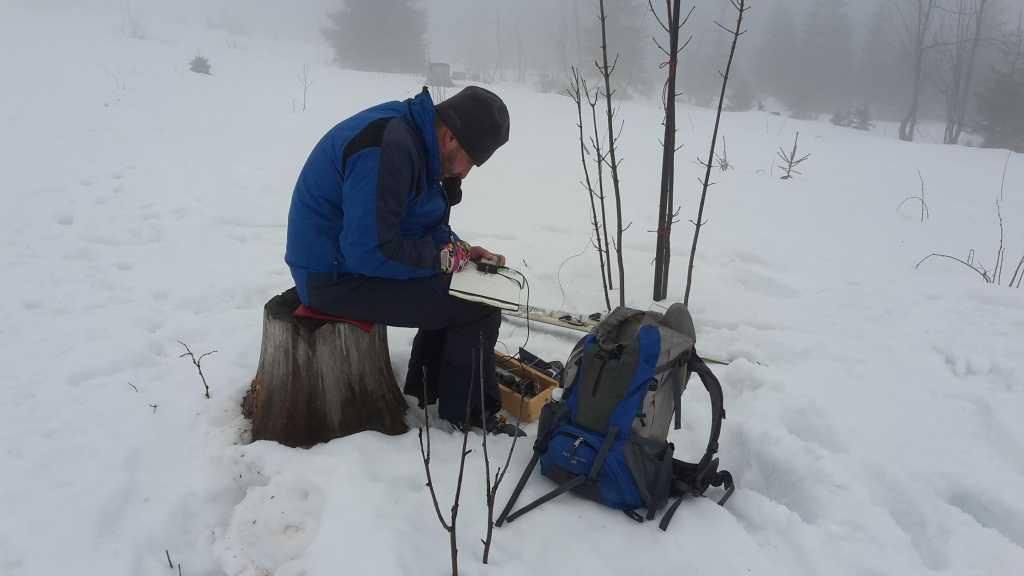 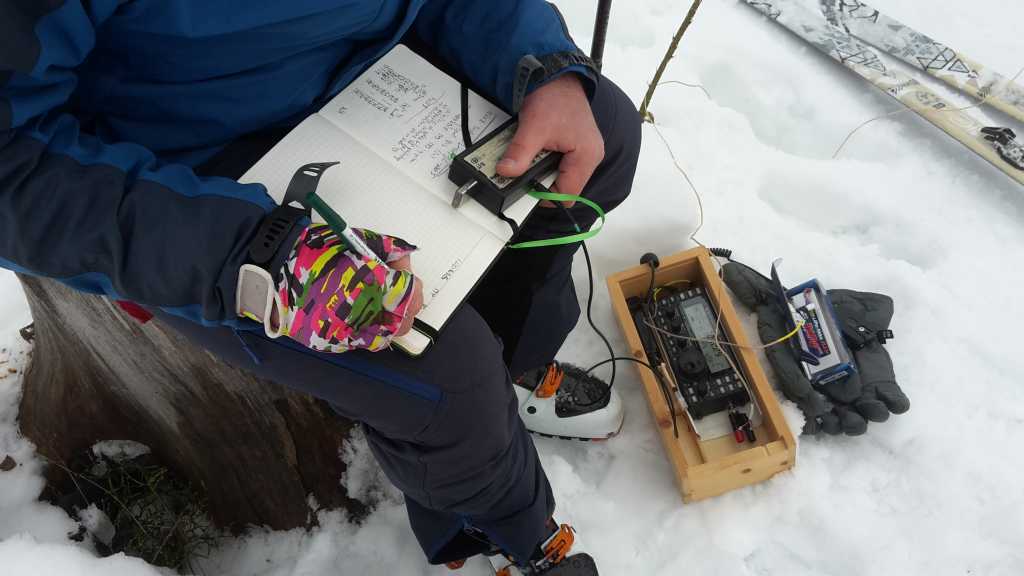 The weather got worse and worse and with the exception of OE5EEP (CW on 40m) we made do with 2m-contacts.

It definitely demands a repetion next year!

Thank you very much for the nice report and pictures.
It looks like you really had a very nice time.
Looking at the 2 last pictures, it looks like Heinz OE5EEP definitely got the best operating position.
I remember the back-ache I got last year after activating on the snow with my back bent and squatting.
I fear you all probably had a bit of the same, except Heinz, who was comfortably sitting on the cut tree trunk. Smart guy

Sylvia, thanks for your efforts producing this nice summary of our SOTA-tour on skies.
It is worth mentioning, that fog and wind on top of Plechy (OK/JC-001; highest summit of “Böhmerwald”-mountains) is a result of changing weather while otherwere in the nearby the sun is shining.
Despite of this special weather-condition our tour was full of team-spirit.

As you wrote: let`s repeat again as soon as possible!!!

@Sylvia: Thanks for the nice write-up and fotos. Just for this alone you would be welcome to join in next year!

@Guru: Regarding the “best operating position” on OK/JC-003 Trístolicník: The picture does not do justice to what really happened: I was still working CW on 40m while the others were already inside the warmth of Dreissesselhaus and enjoying their beers!

Regarding the wooden box of my KX3: I built this box after last year’s activation of OK/JC-001 Plechý. The weather then was equally bad with lots of fresh snow. Guru had commented on my mistreatment of a KX3: OK/JC-001 Plechý Activation (scroll down to very last foto)

Till next year on Plechý!

Thank you Sylvia for the nice photos. I sure hope that next year I will be part of the “expedition”.

I was still working CW on 40m while the others were already inside the warmth of Dreissesselhaus and enjoying their beers!

I honestly prefer to be dealing with the pile-up on CW while comfortably sitting on a cut tree trunk rather than having a beer, Apparently, so you do too

Guru had commented on my mistreatment of a KX3:

I didn’t remember that I wrote that comment to you. I’m glad to see that it served to make you think about protecting the rig better. The wooden box you have now looks nice.
Best 73 de Guru.

Hi Sylvia,
Non-radio question - was it easier for the people with the cross country skis or those with the alpine skis to reach the summit?

Hi Ed,
It was definitely easier for those with the wider off-piste skis with their special bindings and skins because there were no groomed trails which would have been useful for the smaller cross-country skis. The track is used by a lot of snow shoe walkers and you can image that the surface is pretty rough. Especially the (soft) downhill parts were a bit tricky for them. Luckily there were no steep ascents or descents, otherwise it would not have been doable with cross-country skis.

thanks for the nice report . Looks like you all had a lot of fun.

Comparing the snow on your photos with the report of Heinz, OE5EEP, from last year OK/JC-001 Plechý Activation it seems that last year the conditions for skiing were far better. Nevertheless well done! You took the opportunity for an activation on a ski tour. And shame on me, still no activation on skis this winter, but still hoping for more snow in the nearby mountains.

I honestly prefer to be dealing with the pile-up on CW while comfortably sitting on a cut tree trunk rather than having a beer, Apparently, so you do too

To start with we were all standing close by to activate on 2 m but then one after the other disappeared into Dreisesselhaus. I must say that Peter OE5AUL and I had the intention of setting up the dipole to activate on 20 m but the wind got stronger and a mix of snow and water from a tree kept raining down on us. In the end we decided to give up and join the others in the hut where we had roast pork and dumplings

And shame on me, still no activation on skis this winter, but still hoping for more snow in the nearby mountains.

Hi Stephan,
I don’t really think that there is more snow to come

- it’s quite springlike here at the moment. But if we are lucky we may manage a third skitour activation at the weekend.

It’s not springlike here… it’s been snowing for the last 2 hours!

Oh that’s why it’s not coming south… We could definitely do with some more!

Hi Sylvia - well it’s actually snowing at the moment here! Not a lot and very wet, so it’s probably gone again tomorrow.
The forecast is for snow at times up to Easter (whether we believe the weather forecast is another matter).

Very good! Bit different from the red hot weather I did JC-001 and JC-003 in last summer. Desperate for shade (which we couldn’t find!).

As you can see on the fotos published by Sylvia, I was part of the Team and one of two members using cross-country-skis as ten times before.
Never before I had to struggle with such terrible snow-conditions: rough and frozen at the surface
Four times I suddenly found me lying in the snow … laughter included

Hi Franz,
I asked as my wife and I have just bought cross country skis and (if the snow returns) hope to learn how to “Langlauf” across the local fields with the rest of the locals here (no prepared loipe near here). I have alpine skied many years ago (but probaby could remember how fairly quickly), so we thought we’d try cross country - add a simple radio “manpack” for portabe operation and see where we get to.

I am 100% certain there will be many cases of me falling over sideways before I learn it properly!