Thank you Joe for the information! I´ll take one of the two tracks that OE5EEP provided.
Hope that we can meet at the restaurant afterwards! 73!

Thank you OE5 SOTA Friends,
Only one of you is in my S2S log of today but it is always better than nothing

I hope to attend the event next year to see you all again. 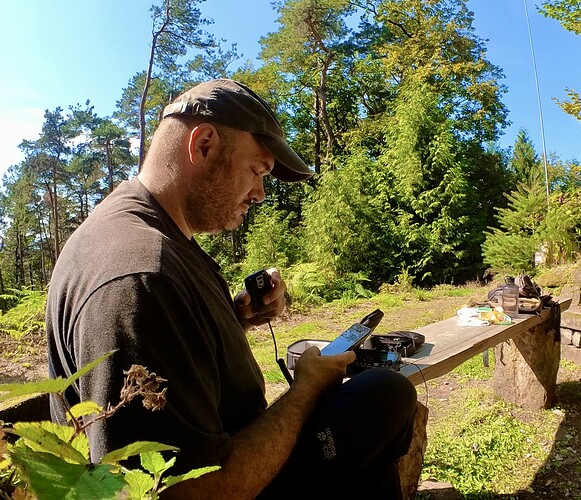 Dear OE operators, it was great to catch some of you along this marvelous day! Maybe some among you can be encouraged to operate on the newly opened 60 m band, despite the noise on it. 60 can offer great contacts between us neighbors where 40 or 20 fail.

It was an exciting day today. Many stations were QRV. I also managed to get some s2s QSOs to OE

. That made me very happy. See you again next year at the latest 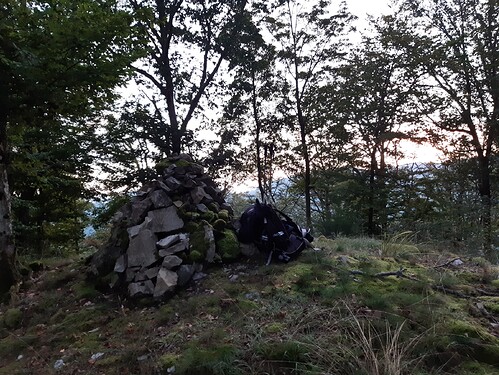 First of all many thanks to OE Team for running this annual event.

I took part last year, so it was given that I participated this year too. I really enjoy this event and already booked weekend for 2022

I managed only 2 OE S2S stations, let’s hope that next year will be higher number. Had a fantastic day despite poor weather. I was very glad that I decided to take a tent with me.

This years OE5-SOTA-Day was a lot of fun! The weather was fine and the bands were full of signals. I logged 28 S2S QSOs in about 3 hours of operation, which tells a lot about activity!

On HF when a pile-up of S2S calls is happening you know activators all over Europe are active.

2m FM was buzzing in the area around Bad Ischl. Later for the dinner a lot of activator, chasers and guests from the local radio club gave a great opportunity to chat and have a good time together.
Activators from OE7 tyrol and Bavaria managed to join the meeting despite the situation.

I am sure we will see the group picture in the next days or hours. 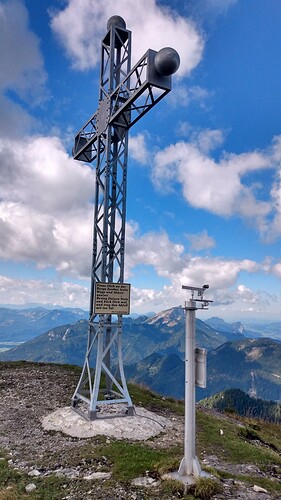 It was a great Event. Thanks for all QSO´s

Martin OE5REO has asked me to share the group picture. 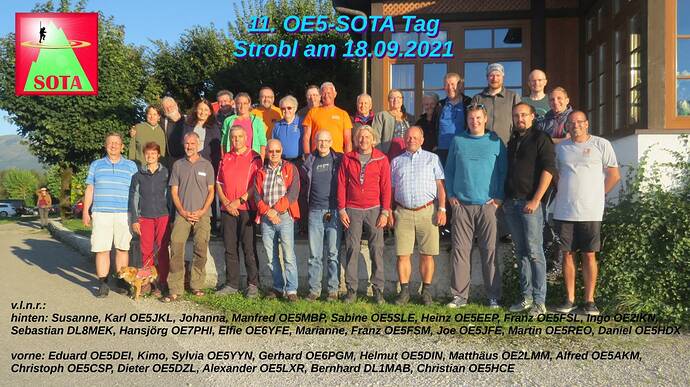 Thanks and congrats to all participants.
Thanks to Sylvia, Martin and everyone contributing to make this event a success

Once again it was a great event!

This time I stayed for nearly 6 hours on HB/SO-005, which was not as long as the last time, but definitely long enough

The resulting number of QSOs using SSB on HF and FM on VHF were 90 of which were 49 unique S2S.

Unfortunately, I worked no OE5 station but only two OE stations, both on 40m made it in my log: OE7AJT/P and OE9TKH/P. Probably both were worked on ground wave, since I could also hear some OE stations on 2m FM. For Austria in general, 60m would have worked much more reliable.

The weather was foggy, but towards the end of my stay it got sunny … 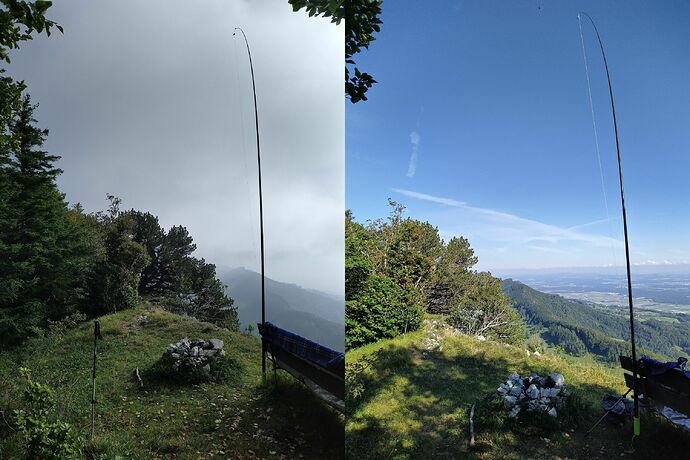 … and sometimes I could see the Bernese Alp mountains between the clouds on the horizon.

On 2m FM, by using a telescopic EFHW antenna, I had problems with intermittent blocking/QRM, but I could not see any antenna around me, and the closest one seemed more than 2km away, according the official Swiss OFCOM map. But the pager transmitters are missing on this map.

On 17m, I had a very interesting QSO with HB9DRW who was using a 60dB! amplifier (1mW in → 1kW out) from home. On his QRZ.com page you can see his fancy Swiss military Zellweger amplifier.

The furthest station I worked was @HB9GKR/P in Iceland (2500km), but compared to about 10 days ago, the signal was very weak.

In general, I had the impression that the conditions improved towards the later afternoon, from bad to OK, IMHO. For example, I had problems to hear @CT2HOV/P on 20m, until 14:26z, which was my last QSO.

As already mentioned by @HB9DIZ, the only band that worked reliable for close-by stations was 60m. Therefore, if you want to increase the number of S2S contacts, just activate on this very interesting band.

I will definitely try to attend the next event. Thank you very much to the organizers!

Thanks to the organizers of this nice event.
Jorge EA2LU and I planned for an activation on Saturday to catch many S2S.

Weather forecast was not the best, but we encouraged to do the activation.

On the approach by car it was raining a bit. Anyway we decided to go on.
The climb was mostly under the rain, but we were motivated and kept on, despite the path was bad and muddy. 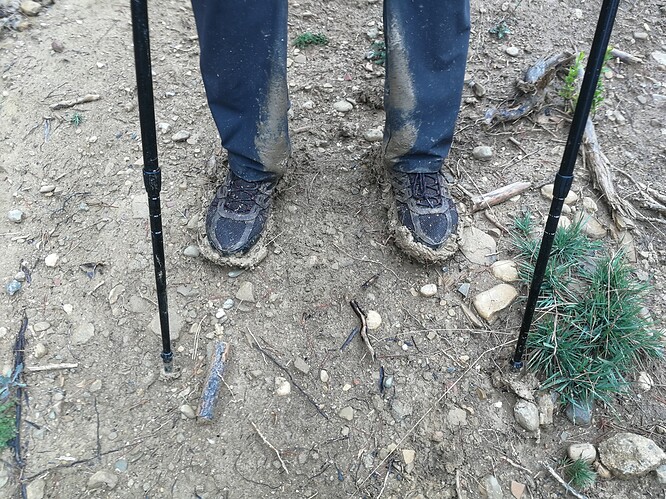 When we arrived in the summit we had a small break and could set the antenna up.
Jorge started his HF activation and I couldn’t move apart, but kept holding my small umbrella so that he could run and qualify.
He just logged 9 qso in a hurry in 8 minutes, including S2S with SO9TA/P and 9A6CW/P. He had to go QRT when we saw lots of water drops over his KX2 ! 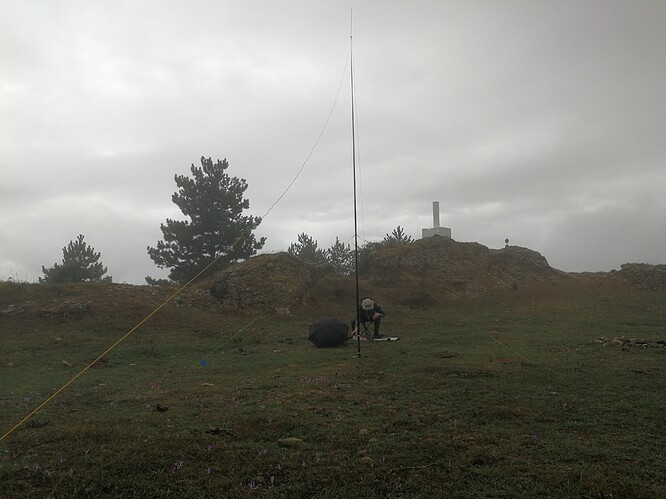 I couldn’t install my aerial but grabbed my VHF handheld and called from under the umbrella. I was luccky to log 7 stations this way; unfortunatelly no S2S this time… 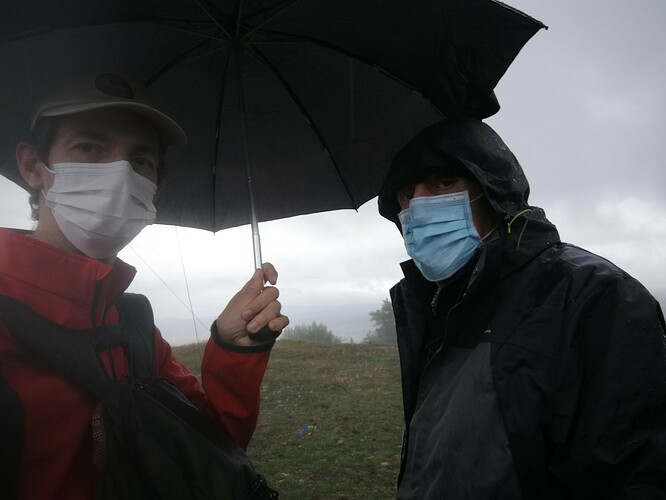 We stood with patience under the umbrella, and after 40 minutes of heavy rain there was a brief pause that we used to pack and leave the summit, going back with care to the car trying not to slide and fall on the mud.
Our boots were heavier, surrounded by sticky mud.

A pity we couldn’t meet our target and participate for longer, but this is part of the adventure in the wild, doesn’t it?

Next year hopefully will be better.
73 de Ignacio and Jorge.

I broke my record of the longest time spent on a summit (about 4h30)! Yes, my dog wasn’t impressed… I had to give he short breaks from time to time (she tends to get a bit nervous when people come out of nowhere so has to be kept on a leash).

I chose a summit with a shelter, SP/SS-010 (Stożek Wielki)… that was a great idea as the WX was far from ideal.

The KX2 is a very nice beast, quite an improvement from the FT818 that I was using up until now. I also chased for the first time CW S2S and it was a bit easier that I thought (so far my CW S2Ses had been initiated by the other party).

All in all, it was great fun and I am looking forward to the next one! 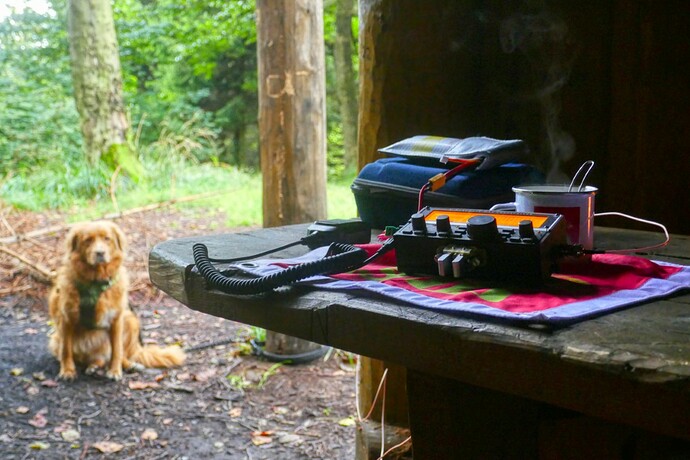 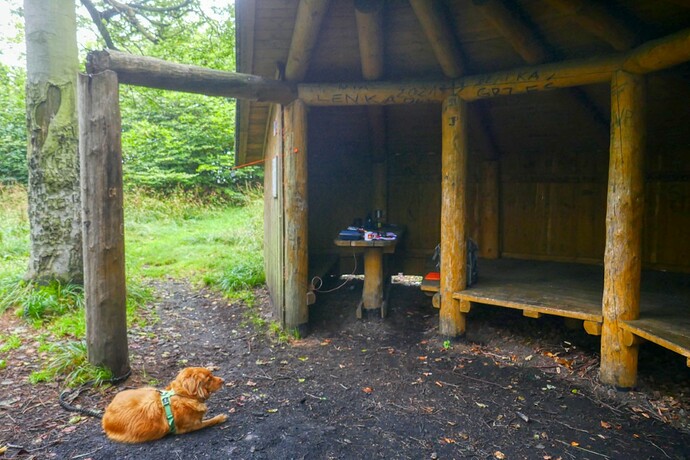 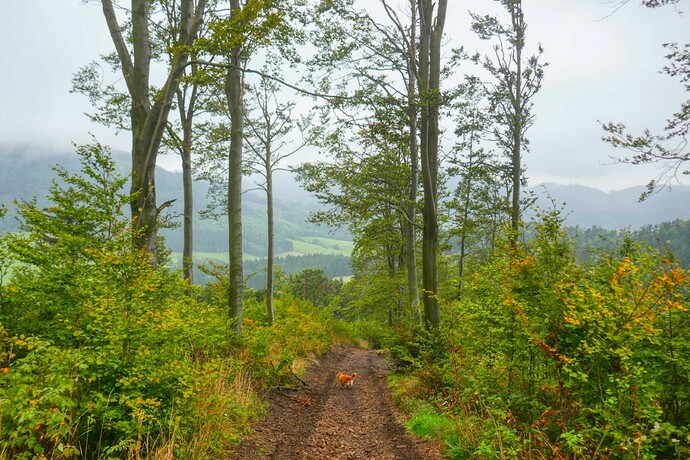 Hi Romain. Thanks for your report with fine photos. Glad you like the KX2

Thanks for organizing this great event!

The weather was perfect with pleasant temperatures and sunshine throughout the day. It was amazing to meet so many friends either at their home station or out there on a summit

The facts in a nutshell: 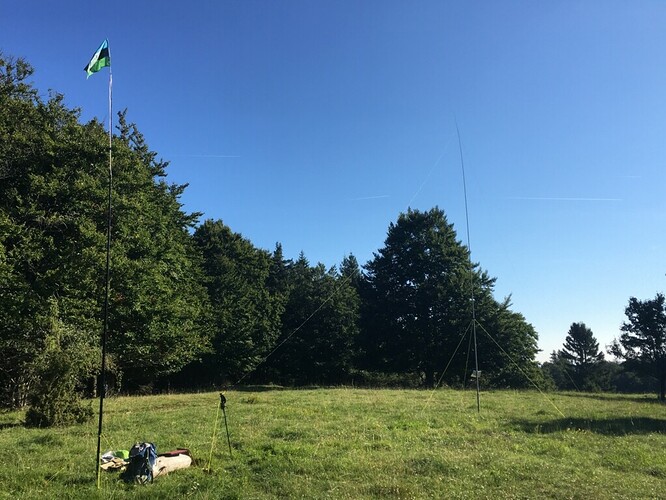 Thanks for all the QSOs, it was lots of fun!
73, Roman 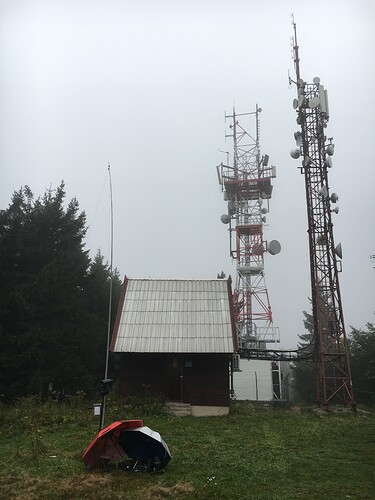 Thanks S2S, Jarek, and sorry I didn’t recognize your call sign (OK8MA) at once