I had a nice double activation today. I got to Osser (OE/ST223) a bit early and started calling before the alert window opened. Luckily Klaus (OE6KYG) picked me up on 20m and spotted me later on 40m. However, the real challenge of the day was always going to be the Frießenkogel. For those not familiar with the situation surrounding the Frießenkogel, it was accessible up until a few years ago, when it was totally fenced of by the landowners. Only a very narrow strip of land behind a barbed wire fence now lies in the activation zone and the normal route from the Heulantsch is blocked by a set of large padlocked gates. I actually had to delete my activation of the Frießenkogel last year when I read the rules and realised I had crossed private land to gain access to the summit zone (it is still possible to slip quite easily under the gate). I had been planning a new route since last year and now the snow has melted today seemed like the perfect day to explore the northern side of the mountain and find (and record) a route up that future activators can use. Firstly, here is a gps track of the route I took displayed in OpenTopo, which is available on the mapping site: 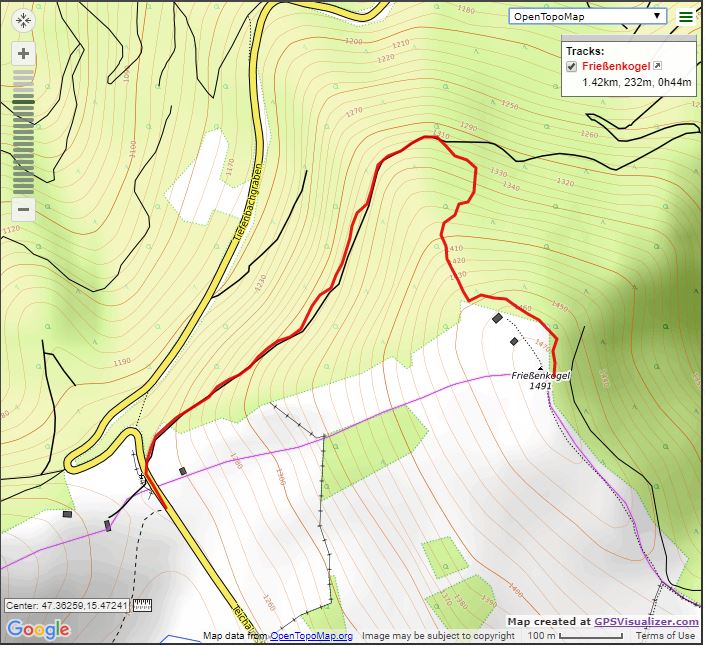 If anyone would like a copy of the gps file (.trk) then please PM me. As I do not have my own website, I will leave a description of the route I took here. I started at the Breitalm carpark, which has plenty of space for cars: 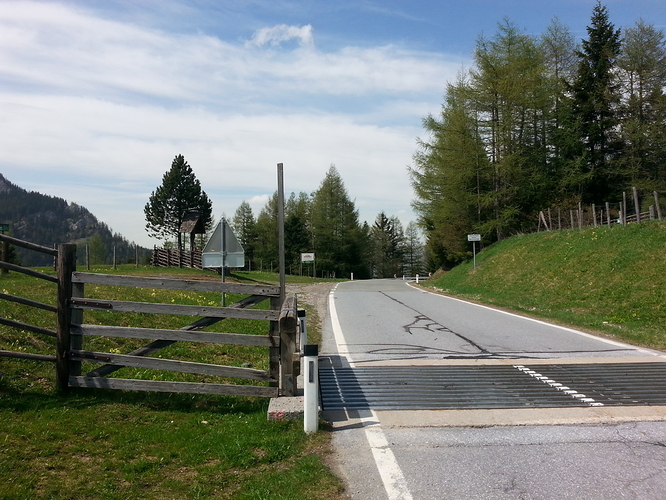 The view up the west side is very beautiful, but sadly no access from this side anymore: 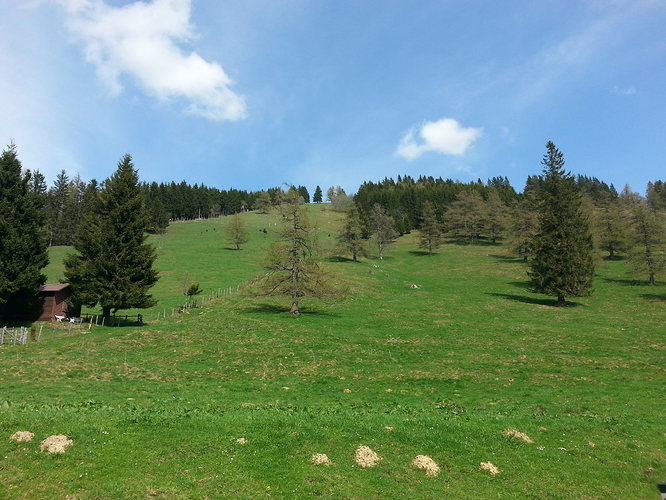 The track that leads round to the north and east slopes starts almost directly opposite the car park: 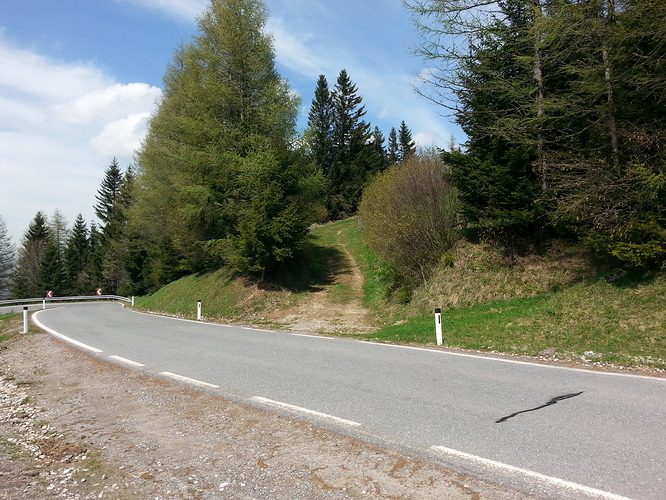 The track leads round to the north side whilst providing stunning views of the Fischbacher Alpen to the north. There is no sign saying it is private and not open to the public, however, it is not marked on every map available. Anyway, the track climbs steadily up to a peak and then starts to drop again. Just after it starts dropping a path leads away up the slope: 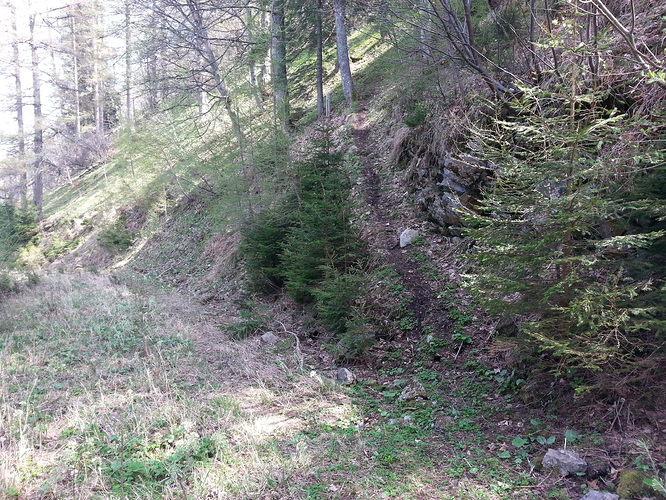 This path leads to a Hochsitz (hunting shelter): 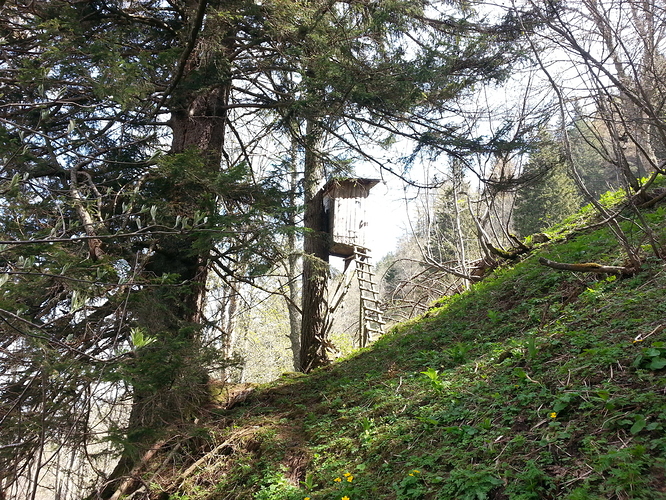 And from the Hochsitz you continue straight up the hill, which is now quite steep with rather soft earth: 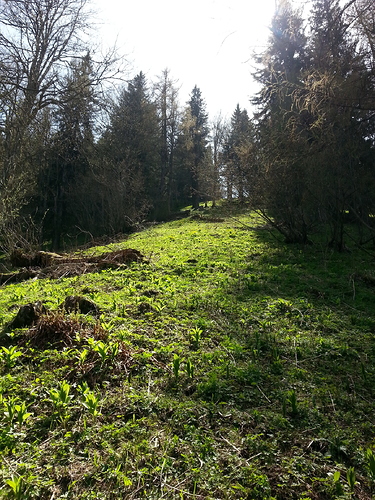 You don’t have to go this way, the area is not at all overgrown at this time of year and there are plenty of alternatives to choose from: 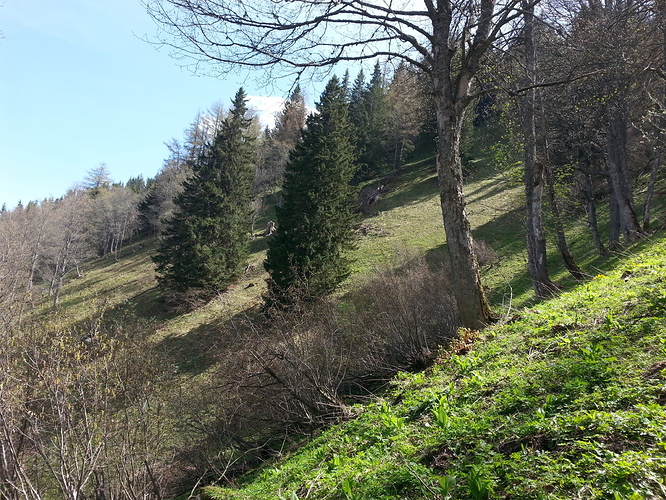 The whole area is full of what looks like Marsh Marigold to me: 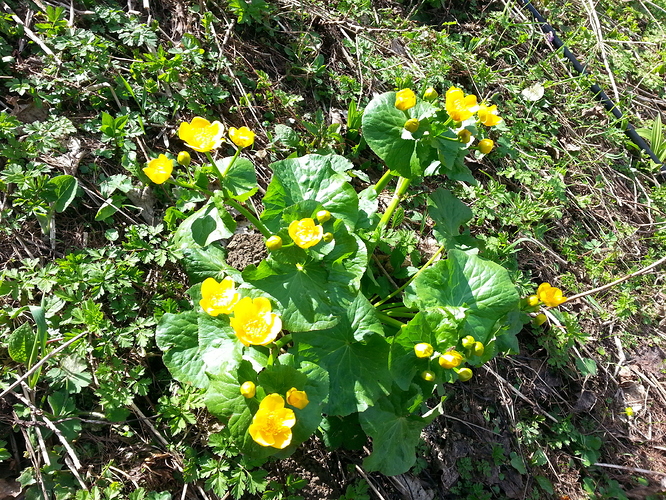 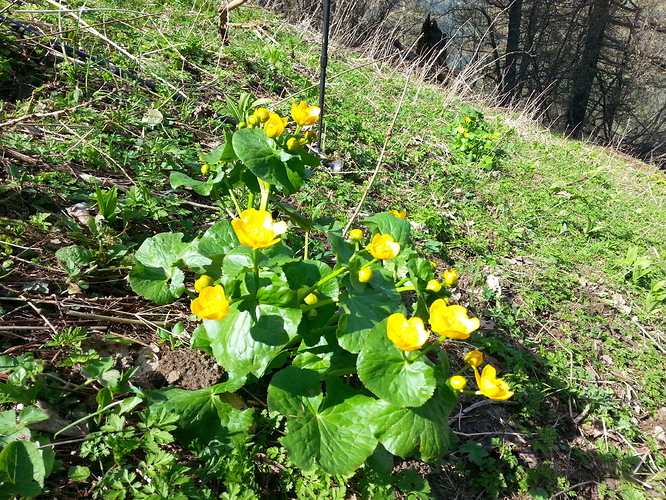 When you get to the top of the slope you come to a clearing on a ridge that now leads to the summit area through some trees: 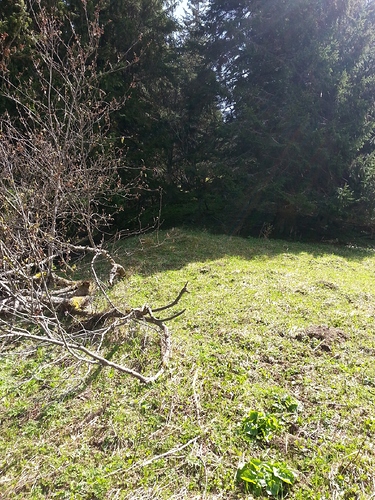 At the top you come to the barbed wire fence with a barn behind it: 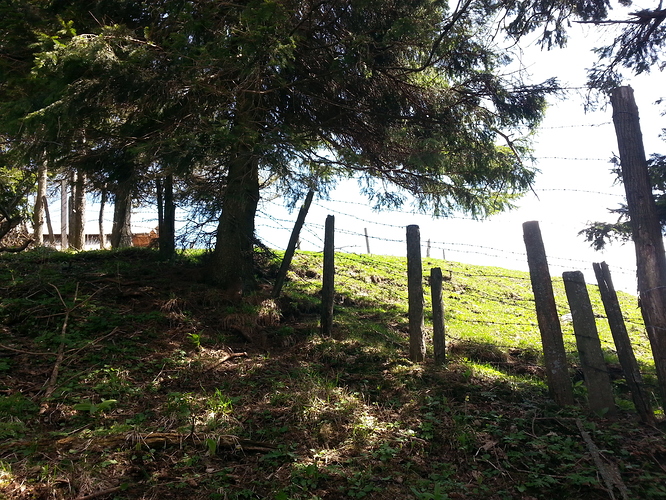 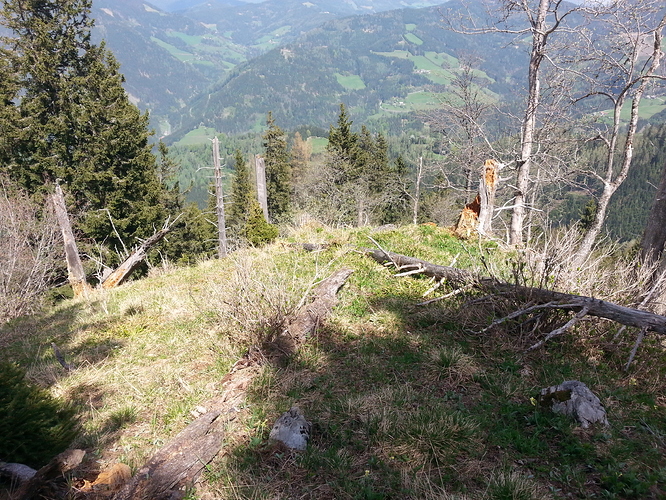 I kept going round both to be on the safe side and to see what other options there were. Eventually I plumped for this spot right behind the fence at about 1470m; just 4m inside the activation zone: 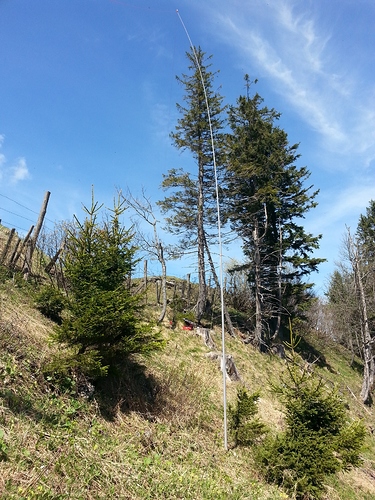 As you can see, just a week or two after the snow has disappeared the area is actually not too overgrown at all; I even managed to get my 10m mast in the air. My ground chair was perched quite precariously behind a tree stump: 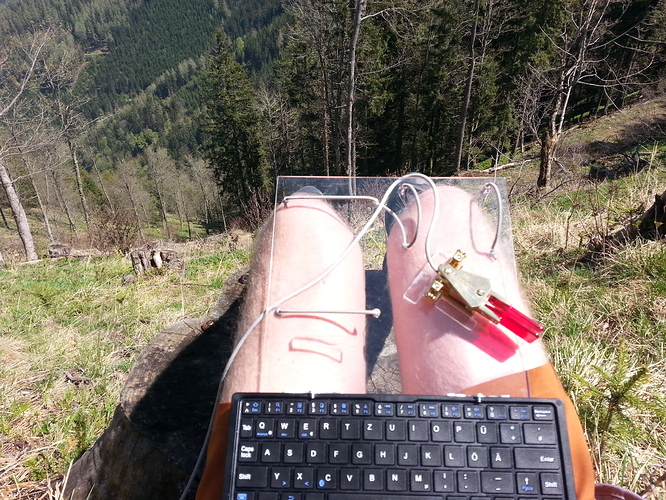 But what a view to enjoy while activating: 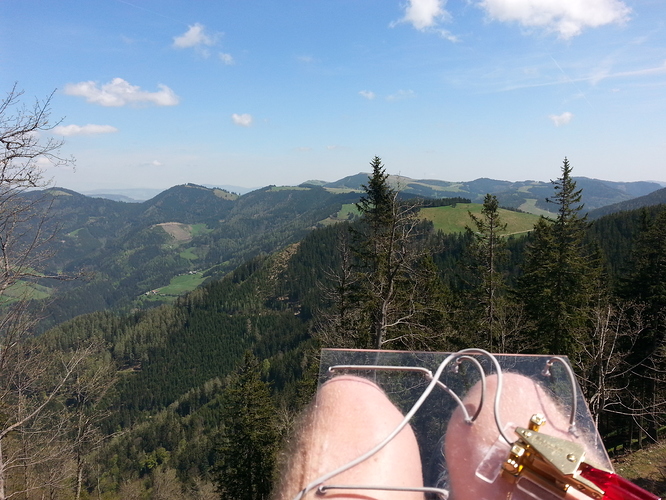 So, the main thing to take home from this is that the Frießenkogel is not a particularly difficult mountain to activate, providing you go just after the snow has melted. In summer it is a very different proposition. I do not guarantee that the way I have described does not pass over private land. All I can say is that it is the only way into the activation zone that is not expressly forbidden to the public. If anyone has better information, and can show that the landowner does not condone people using this area, then I will happily delete the activation again. But if that proves to be the case, then it will not be possible to activate the Frießenkogel no matter which route is taken into the activation zone.

Thanks for your report and the photos. Your beautiful pictures look like an advertisement from the Austrian Tourism Board!

I was on Friesenkogel last year. The pasture looked empty, I could not see any cattle from the gate. So I slipped through. When I approached the summit I could cover the whole area and realized that there was a herd of bulls grazing further down the slope. I very quickly retreated and moved out of the fenced area! On second thought it was quite obvious because the fence was much higher and stronger built than the usual cattle pen.

I later operated northeast of the fenced area and just outside, probably close to your position! This is a popular summit and lots of people must have found the way to safety. I wonder if anybody has ever operated surrounded by bulls…

I heard somewhere that there were buffalo kept in the enclosure. Whether they are more dangerous than normal cows I do not know. However, the owners are also to be avoided. They will eventually work out why everyone wants to put up antennas on their land and that would ultimately harm the reputation of SOTA. The summit can be activated satisfactorily without causing any to nuisance to people working the land and that, in my opinion, is what is in the best interests of the SOTA program. I produced a route description because many people have asked me about my activation of the Frießenkogel and how I accessed the activation zone. I hope my description is useful to future activators.
de OE6FEG / M0FEU
Matt

I heard somewhere that there were buffalo kept in the enclosure

…what type of buffalo? …american bison?

…what type of buffalo? …american bison?

Access to summit and activation zone is only possible on the northwestern side of the buffalo enclosure. The standard route ends outside the activation zone!

I assume they are the kind of Buffalo that the Italians use for their milk to make Buffalo Mozzerella.
de OE6FEG / M0FEU
Matt