This was my first SOTA since the Granada activations during the summer holidays. The weather report was by far the best early Saturday morning for the weekend.

I set my alarm for 0515 UTC, drove to Ambleside, then turned right at Skelwith Bridge then through Elterwater, Chapel Stile to Langdale and the National Trust car park at New Dungeon Ghyll NY295064. It’s worth mentioning that there is also a bus service with a stop right by the car park, so public transport is definitely an option.

I didn’t have enough change for the car park, but a fellow walker said that £4.00 had got him a ticket good for the whole day which was great news as I could manage that! Then it was straight up past the hotel and through the gate at the start of the path up to Stickle Tarn.

The stone steps on the way up were mostly dry and a fairly easy traverse. There were quite a few wild campers around the tarn who had all packed up and left by the time I returned. I’d been chatting to the walker from the car park - he was planning on doing 7 Wainwrights (I think he managed 6). Pavey Ark looms menacingly as you reach the top of Stickle Ghyll and my friend was planning on taking Jack’s Rake to the summit - it is a traverse that runs from right to left across the face with an unforgiving drop off and a 45 degree ascent in places.

Personally I don’t fancy it and afterwards when he caught me up on High Raise he did say he found it really quite scary. 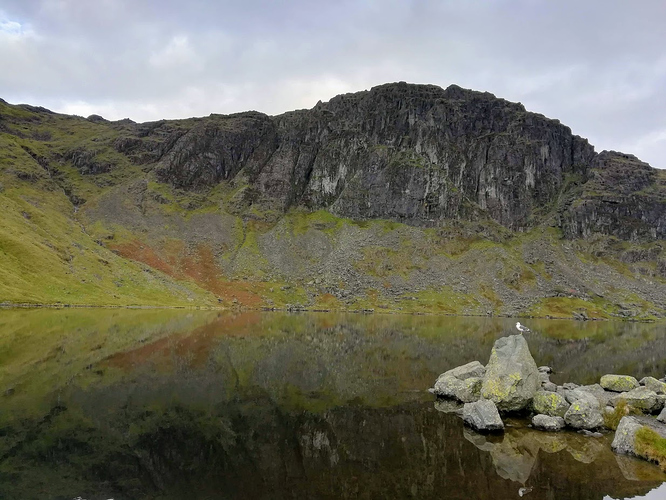 I took the somewhat lumpy route to the right. This passes round the back of Sergeant Man then onto the relatively flat summit where the Cairn stones rise up as the hill rolls off. There was a bit of a nip in the air indicating that summer is well and truly over! 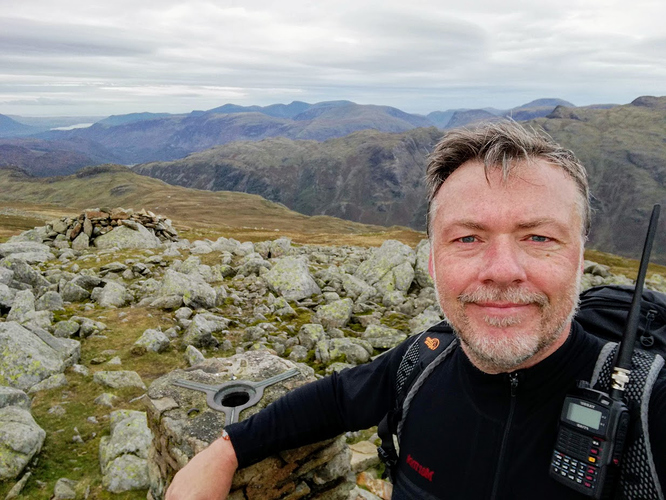 For activation I initially threw the 2m SlimG up the 10m SOTABeams compact pole and had responses straight away from John in Penrith G0TDM, then a S2S with M3TMX/P on the South Pennine’s summit Black Hill G/SP-002. Douggie G7CDA and then Nigel in Kendal 2E0TUE were in the log followed with Geoff in Annan GM4WHA before I switched to C4FM with a quick contact from Douggie with distance registered at 58.1km.

After I’d setup for HF I had a quick 2m QSO with Sue G1OHH - there was no mobile signal to be found on the summit so Sue helpfully provided 20m, 40m and 80m spots for me which was great and sped up the activation no end.

Douggie managed to work me on all bands I operated on, good show. I had a number of 20m contacts including Manuel EA2DT a very regular chaser and also a S2S with F4EGG/P on Le Bau Rouge F/AM-666.

On 40m I got regular chasers IK2LEY, EA2IF and PA1BR in the log and also nice to get a S2S with Phil G4OBK using his Czech Republic callsign OK8CDX/P on Neštetická hora OK/ST-048. A final run on 80m brought in regular chasers GI0AZA and G0FEX and finally persistence paid off with a very difficult copy from John @G4TQE. Thanks for keeping with me till the end!

Whilst packing up Geoff GM4WHA mistook David’s G6ENN CQ call from The Knott (Wainwright LDW-066) as me which worked out fine as we were both able to work him, and then another Wainwright activator Mark M1MPB/P on Scout Scar LDO-101 in the log before a long chat with Sue G1OHH to thank her for her help and catch up. 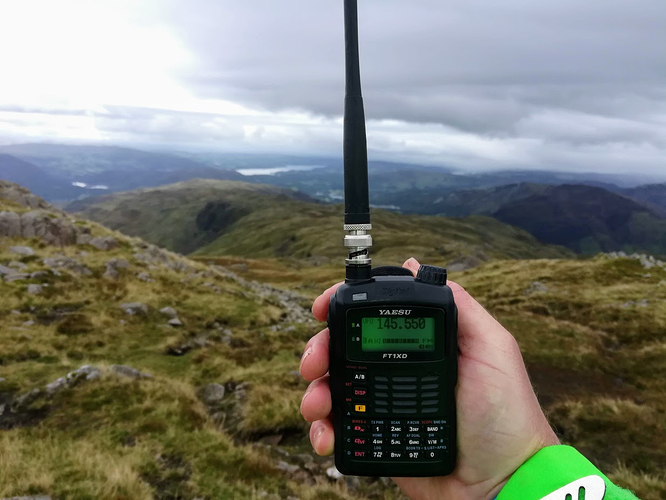 On the way down I was able to help a runner on the ‘Cumbria Way’ event, some 70+ miles long in a day, who had taken a wrong turn and unfortunately had wasted his efforts getting around 1/3 the way up Stickle Ghyll! Now drizzling, the stone staircase took some careful traversing on the way down. The more relaxed risers were now out in force which was a shame as they definitely had missed the best of the day.

I found the going quite tough on this activation which may have been down to not wearing the boots for a while and also a break in activation which I’m sure affects fitness. I don’t think the loaded backpack helped either. Total distance was just over 10km. Ascent time was 2 hours which included quite a few photo stops and chats. Time down was about 20 minutes less.

Thank you to all the chasers. Photos are here: https://photos.app.goo.gl/pnbCFEvcKYUDkrh1A
I clearly need to do more SOTA activations soon to get back up to speed!