My first SOTA activation! Big thanks to all the chasers for their patience

I picked the summit because it was the closest to my home and (according to Google Maps) reachable by bike. It was a cloudy and not too warm day, so I packed the radio and antenna, hopped on my commuter bike, and off I went. City streets went by, then uphill, then gravel road through the forest, it was all very pleasant. At some point the incline was too steep to continue on the bike, so I started pushing it. After a while longer steps and an even steeper incline made it clear that GMaps’ opinion of bike reachability was wildly optimistic. I eventually made it to the top, caught my breath and started setting things up.

A bench made for a great operating position and antenna mast support. I tied the other end of the antenna with some string to a tree branch. The whole setup took about 15 minutes and some fiddling – it was the first time I was using the pole, and the antenna in this configuration. Once ready, I went to spot myself and noticed that CT2IUV was active on CT/DL-001. I tuned up, heard him and called. He came right back, giving a great summit to summit start to the activation.

After finding a clear frequency I spotted myself and called CQ. A couple folks came right back – yay, it’s working! The third one was N1GB. Could it be? Yup - my first transatlantic QSO, with 10W portable! Things continued well, with a frequency change inbetween due to QRM. VE1WT joined in for a second trans-continental. The chasers were quite patient with what I suspect was a sometimes awkward operating procedure on my side. After 40 minutes and 20 QSOs in total I was starting to get pretty cold so I wrapped up, packed, and headed back down.

I figured I’d try the other direction out of the summit in the hopes of reaching a bike-able path sooner. I did, but it lead to the other side of the Albis and my phone battery was dead. Orientation was thus more difficult and I ended up taking a longer way home, including crossing the Buchenegg pass. I had done it before, but not on a commuter bike while carrying a radio and antenna on my back… ended up a few stops to catch my breath along the way, but somehow managed to break my time record on the downhill. The Strava track looks interesting but probably not very accurate due to all the on foot pushing.

All in all, this was a fun and rewarding outing. After getting my ham license a couple weeks back I had a couple frustrating experiences trying and failing to make QSOs, so it was very rewarding to have this first activation be a success. Some (in retrospect obvious) things to note: 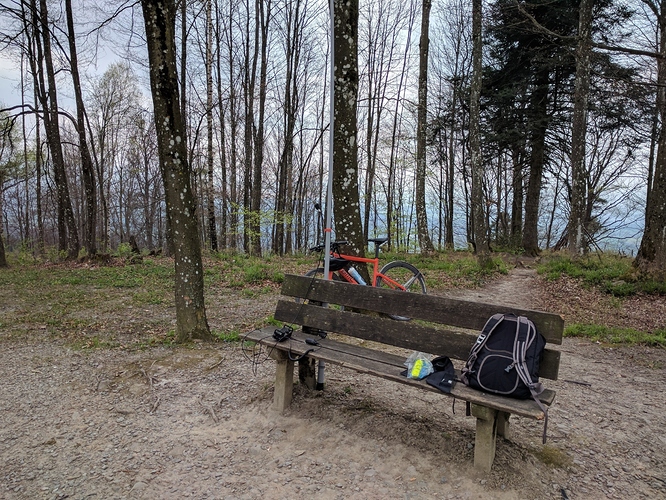 A S2S (Summit to Summit) is a great way to start out your SOTA adventures. Nice gear, nice write-up and congrats!

You had a great day, congrats. Propagation is very changable these days, but you’ve done very well. KX2 is a nice piece of equipment, you will be pleased with it on future activations. Thanks for your nice report and good luck with SOTA.
Hope to meet you one day for a S2S.

Awesome! Solid Work!!! I love my KX2, but you already have more contacts on yours than what I have been able to do thus far!

Great job on the activation! Looks like you are off to a flying start. Welcome aboard.

Glad I could give you a chaser contact from across the pond.