Last weekend was a bit longer than usual and the weather seemed fine. Also, i got a few free days for my own use and a plan of visiting my parents by bike was lingering in my head for quite some time now. So i could combine all that with the long days in June to additionally activate some summits near the route! 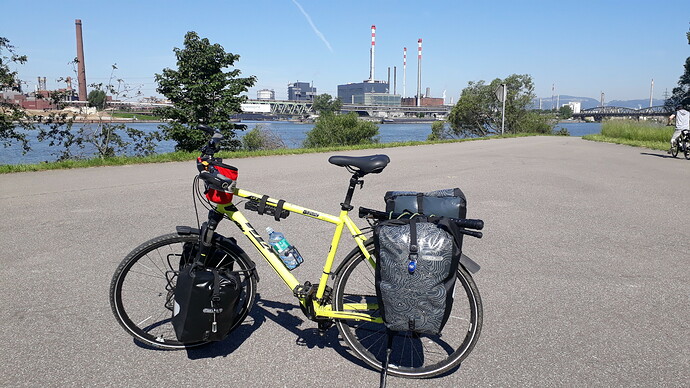 20210603_0933084128×2322 3.02 MB
Quick breakfast, packing the bike, rolling down the road and… going back again and up to the flat to unplug the now fully charged HT and stuff it somewhere in the bike panniers. Great start! Stop at the covid-test lane to be able to enter a restaurant the next days, and then finally on my way!
The first kilometers felt great, until the danube took a bend to the east and a mild headwind appeared. But the first day is no problem at all on such bike tours and in almost no time i found myself near the city of “Grein” which marks the beginning of a narrow section of the danube. From there: up the hill in the heat of the sun on it’s highest point on the day, but passing along very nice farmlands and barns on the hills. Looked great! Pushed the bike up the last 20m in heigt up to the actual summit (with no visible summit mark at all). OE/NO-174 (Brandstetterkogel) was reached. 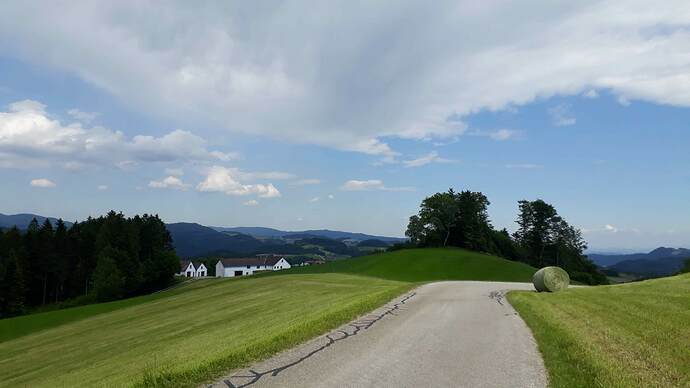 20210603_1517204128×2322 405 KB
Managed to get 15 contacts on 2m FM in less than an hour, 4 of them being S2S QSO’s. Great!
Down the hill: Great! - Back at the “Donauradweg” cycle way more and more signs appeared to remind about the “Nibelungen”-legend, which seemed to partially play somewhere around this area. Some ruins and very nice views guaranteed. 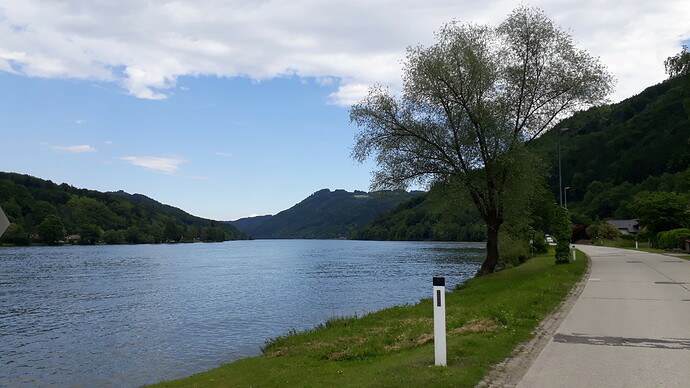 20210603_1538204128×2322 1.96 MB
Already put up the tent at 4 o’clock, Managed to get a small break and a fine fresh Trout (dt. Forelle) for a late lunch, packed my backpack and to prevent myself from unwanted puking i hiked up the next mountain instead of cycling up. takes longer, but you have more time to enjoy the views

. Going along the austrian part of the “Jakobsweg” pilgrims way it took me about an hour to get up to OE/NO-321 (Hengstberg). The activation was really hard. Only one contact on 2m, and hard conditions on 20m and 40m and no responses on my Spots at all. 4 contacts on shortwave. Maybe the mobile communication mast nearby made it that hard? - Up the summit i chatted with a local guy quite a time and showed him how to make a contact on shortwave. he was impressed that i could speak to italy :-). 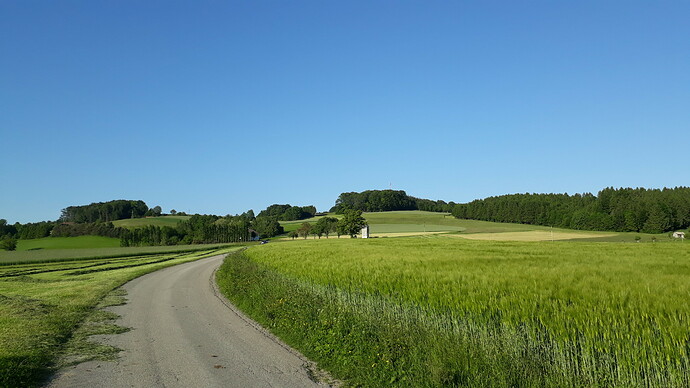 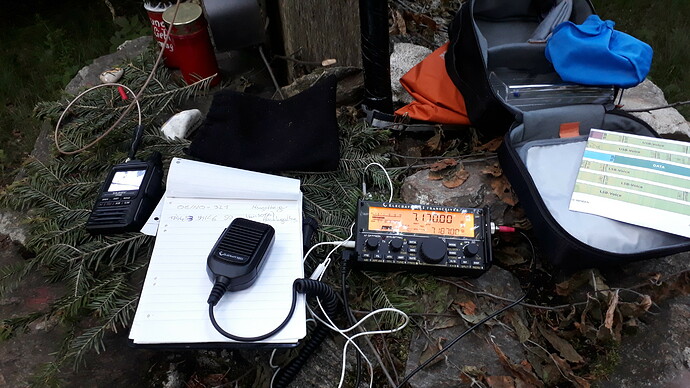 20210603_1955014128×2322 1.76 MB
He wasn’t present anymore after i got Youssef from Morocco. - After sunset i packed my stuff and ran down the mountain to have at least some kind of light most of the time. Right on astronomical sunset (=totally dark) i reached the tent. What a great first day! 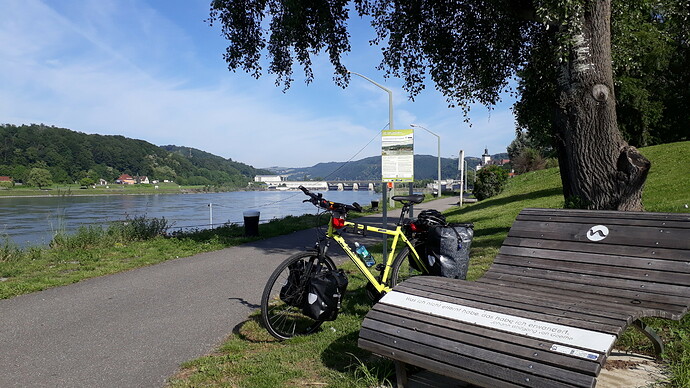 20210604_0836534128×2322 2.74 MB
Long day ahead, so packing my stuff early, jumping on the bike and going to the hydroelectric power plant (also featured in the novel “Blackout” by Marc Elsberg: “Ybbs-Persenbeug”. Enjoying breakfast on a nice resting place nearby and went on. The expected headwind also started early today. A guy i briefly met didn’t complain about it, but he wanted to cycle to Athens, Greece: More headwind to expect for him! At around 11a.m. LT i reached the city of “Melk”, which is great for ham radio operators! It has morse code tours embedded in the ground! How cool is that! But: no time for that, still have most of the way ahead. 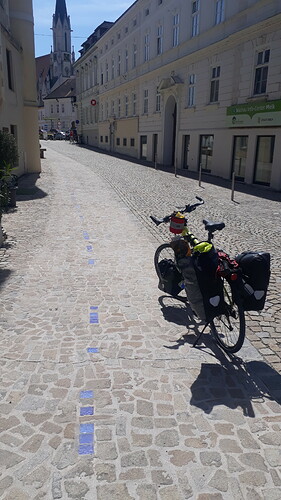 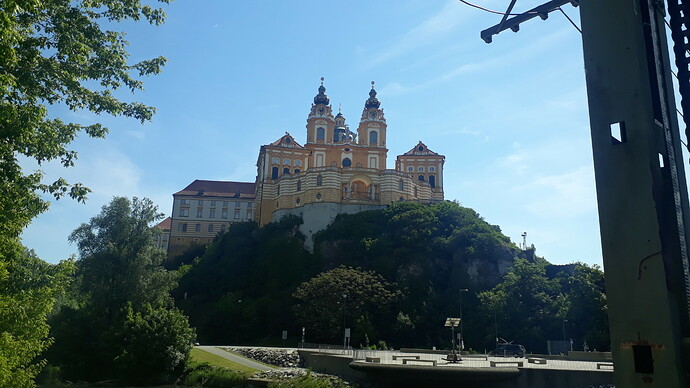 20210604_1052214128×2322 1.83 MB
Taking the “Pielachtalradweg”, then somehow transition to the “Traisentalradweg” until i reach the city of “Traisen”. Because of the headwind, heat and additional breaks for getting some water i lost almost 2 hours according to the plan and just quickly packed my backpack with 2m-equipment for hiking up OE/NO-275 (Stockerkogel). I saw a sign that they have a mountan hut up there! I’m hungry anyways, great! - But up there: closed

. So a quick activation with Joe (OE5JFE) on another summit (S2S!), two local hams (thank you guys, without it wouldn’t have worked out!) and always helping Sylvia (OE5YYN). 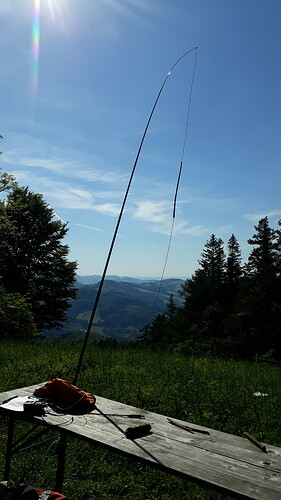 20210604_1643582322×4128 1.85 MB
Hungry and thirsty i hiked down, hopped on the bike and grinded the last 15km (of more than 100 today) with lots of headwind and slightly uphill the “Gölsentalradweg” along the river “Gölsen” to the village called “Gölsen” and their campground. Finally! An almost warm shower later and a set up tent the sun was about to set and the pizza restaurant seemed now more interesting than the summit OE/NO-106. I happily chose the pizza this evening 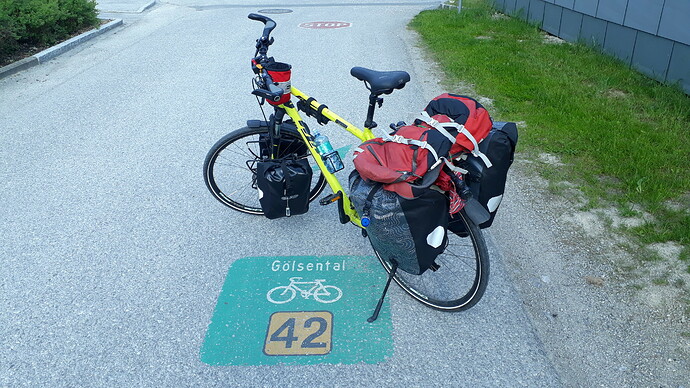 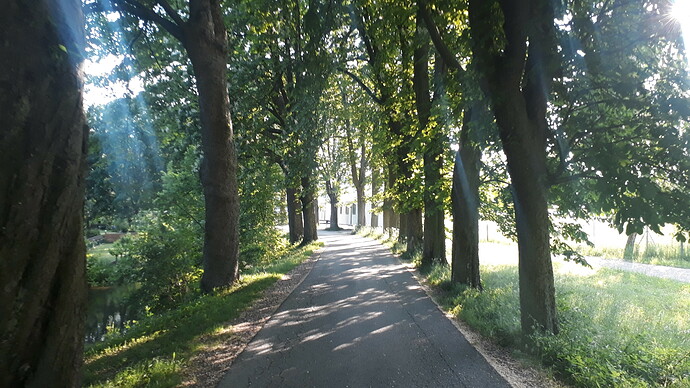 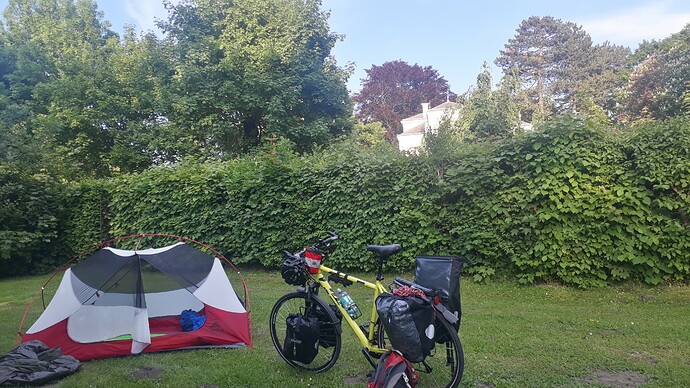 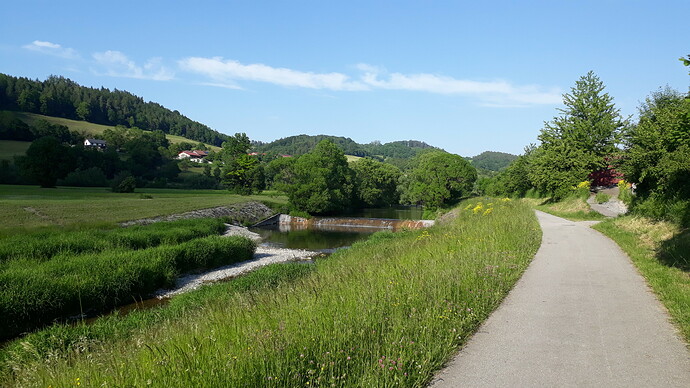 20210604_1803404128×2322 2.61 MB
Later this day some heavy rain was expected, so: Again start early. Cycle up the mountain pass “Gerichtsberg” which was part of the (back then) famous bicycle race “Wien-Gresten-Wien”. After two days of headwind this little upslope almost was relaxing

. But: Still some 200m uphill to go for reaching “Valeriehöhe”. Was a great cycle up, perfect slope. In very little time i reached OE/NO-272 (Valeriehöhe) and in no time i reached my first contact on 2m, who warned me about this summit: Even a good sota-junkie he knows wasn’t able to activate it one time. 10 minutes after that i broke off the connector of my roll-up j-pole and got only one additional contact on 2m after that with the stock-antenna of the ft-3d. This summit is cursed! For sure! - Also on 20m and 40m i hear a lot of operators calling cq on their summits, listening to the qso’s they did, but no one ever answered my “summit to summit”. I have to gain a lot of operator skills still. (by the way: thank you SA4BLM Lars for helping me with the callsign of another operator…) Okay, i at least activated the summit. And after 1 hour of trying 20 and 40m again i stopped with a contact from romania and gave up. The sun was already very hot this late morning and i have to outrun the rain later this day. 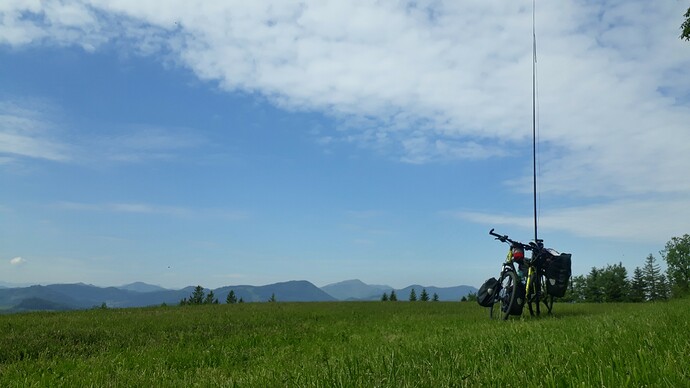 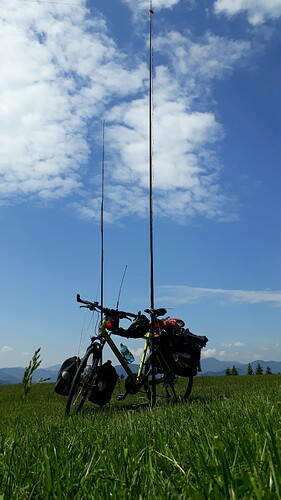 .
Rest of the day was again: 80km+ of sun, heat, headwind, nice views, unexpected ascents, search for water sources, ticking clock, etc… etc… and the nice feeling of finally doing a bike tour i wanted to finish for quite some time.

Only on the last kilometer i got a few drops of rain on my head. Just in time! 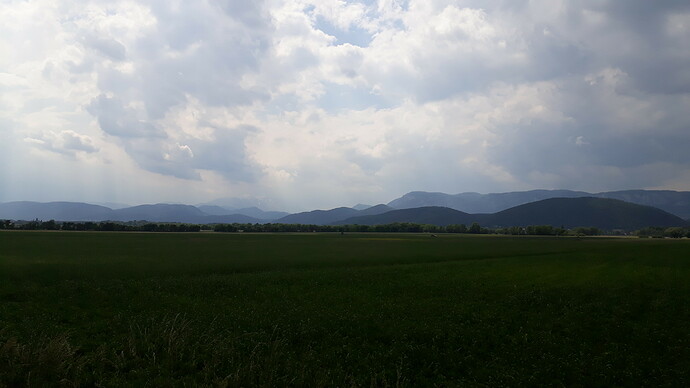 adding up all data recorded by my watch it totaled out to be:

(but i have to say… the 1900m by bike - altough it definitely felt like being 1900 - realistically it should be more like 1500m as roughly calculated on the map. but maybe the little ups+downs really added up to 1900. who knows…)

Nevertheless…
It was a great little adventure and i will do that again sometimes on another route with different summits to activate!

Hi and thanks for your report and great photos. Well done.

Hi Daniel,
very nice Your SOTA bike tour.
At the same time I was on SOTA hiking tour north from You in OK and OE.
We hade no chance for S2S.
73 and hope for S2S with You
Karl, OE5JKL 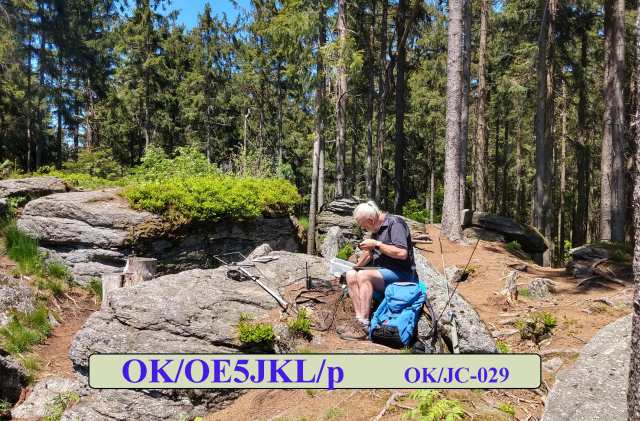 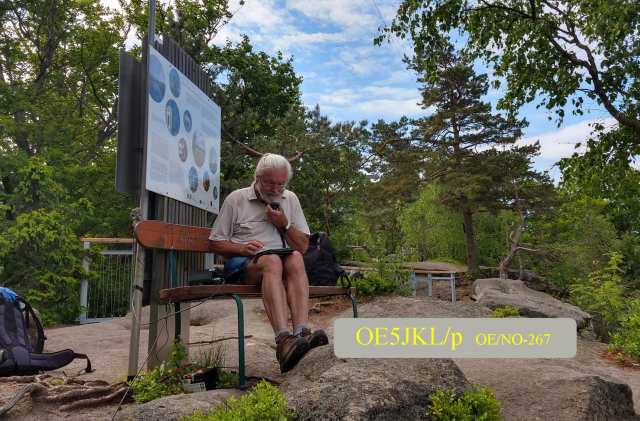 Thank you Karl!
I heard about your tour from oe5jfe i think, and i saw some of your spots, but no chance for a s2s. i somewhat had a tight schedule ;-). your summits looked far nicer than mine i have to say.
S2S for sure!
73,
Daniel

PS: i missed your activation today too. was on the road at that time.