One of my main interests in SOTA is activating all summits in EA2/NV, so I chose a 1 pointer to the South-East of Pamplona that I had never activated. In fact, it had only been activated once in August 2013 by my friend Santi EA2BSB (SK) with just 5 QSOs in his log, so it was a new reference for most of the chasers. Unfortunately, I had not yet met Santi by that time and I wasn’t yet taking part on the SOTA program, so I didn’t chase him then and my activation today couldn’t make a new complete for me. I hope some activator will soon activate it again to give me the chance to chase him and get a new complete.
Mt. Legin EA2/NV-145 is located about 30 Km SE of Pamplona where you’ll see on the following map:

The start of the hike is on a dirt road and I had to drive some Km on dirt roads to get there. Amazingly my Tomtom didn’t ask me the usual question “do you want to avoid unpaved roads?”. Lower clearance vehicles than mine wouldn’t make it due to one specific spot where I made it with care, but not any regular vehicle would.
In the following image you’ll see the GPS track I followed and the elevation profile.

The ascent started on an easy to follow track with the summit at sight, 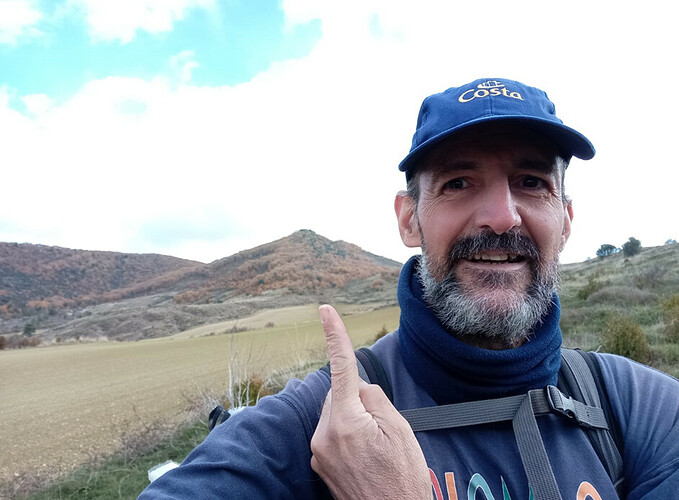 but soon I lost track, probably confused with many other cattle tracks present everywhere, so I found myself dealing with knee tall heather-like bushes. Before retracing my steps to rejoin the good path, I took this picture of myself in the bushes for you to see: 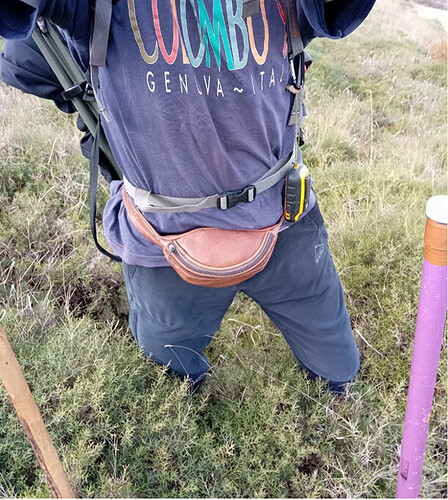 imagen612×682 185 KB
My walking stick and fishing rod self-kept in vertical with the help of the dense bushes while I was taking the picture.

I found the good track, but further up, the same story happened again and I lost it again probably confused by other animal tracks, so I got into sometimes very dense vegetation, forcing me to go back and retrace my steps over and over again. But I wasn’t being successful on finding the good track and given that the summit was pretty much at sight, I decided to keep moving upwards. This got me into troubles sometimes, having to cross really dense vegetation and pass through small tree branches, which wasn’t easy at all with my backpack on.
Passing through these trunks and branches with a bulky backpack seems difficult… 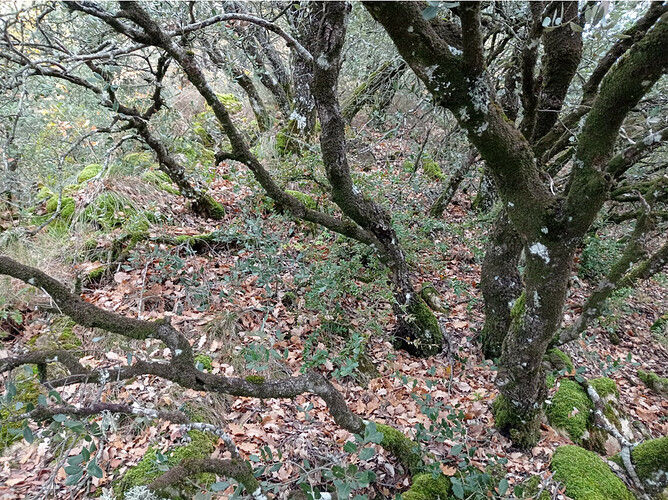 After 1h of difficult ascent, I got to the summit: 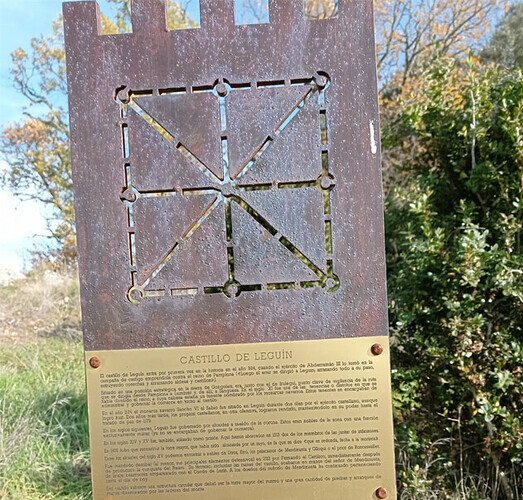 I found a dead and dry tree trunk to which I attached my 7m telescopic fishing rod. From its top end I hung as a sloper towards the North my 10m long endfed wire down to a 9:1 unun, from which a 5m long counterpoise wire was extended on the grass following the sloper wire direction.
Rigs were my usual FT-817ND at 5W with MFJ-941B antenna tuner.

The S2S highlights today were:
1- HB9AFI, who made S2S with me from 2 different summits today.
2- M0NOM, my friend Mark, who made my day when he called me on 40m for S2S. 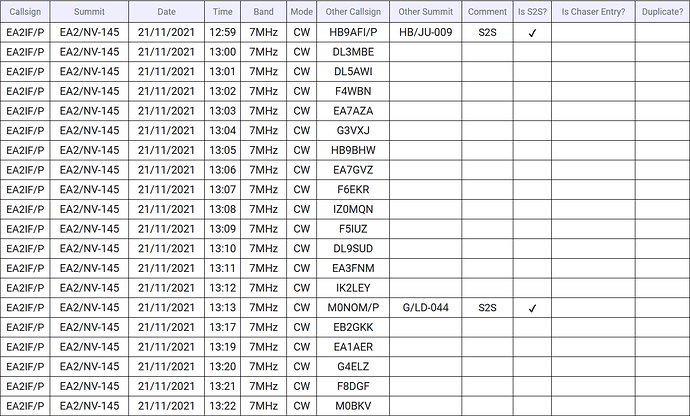 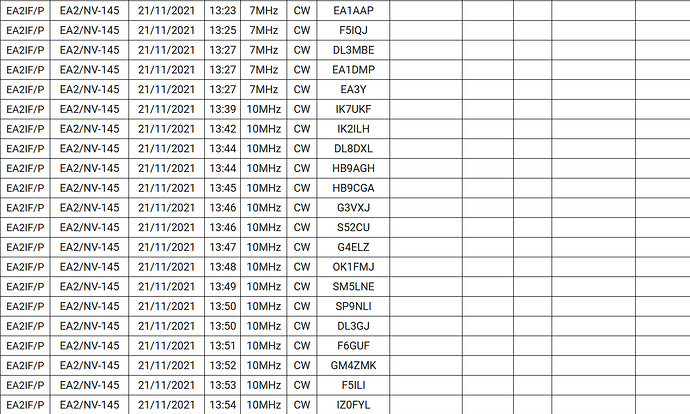 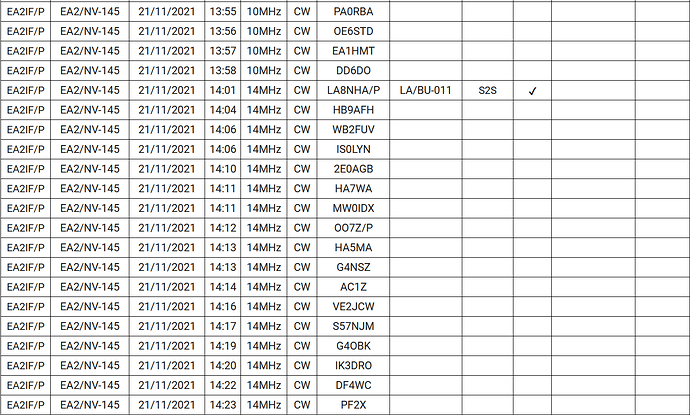 You can see it on the map: 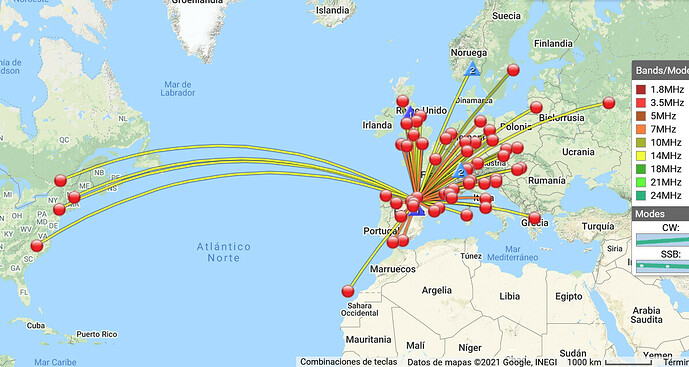 I forgot taking pictures of my setup, sorry.
When I arrived to the summit, there was a very nice sunshine, but not too long after having started my activation, grey clouds started to enter from the NorthWest until the whole sky got covered by dark grey clouds. The cold wind from the North also made presence, forcing me to put on my body all 5 layers I had.
Before leaving the summit, I took some pictures: 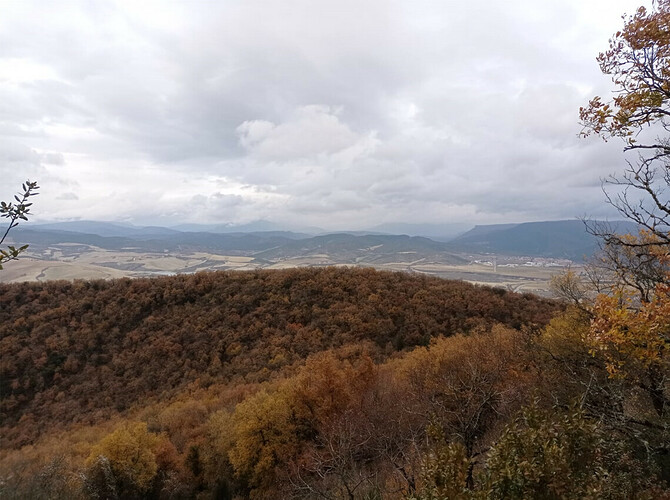 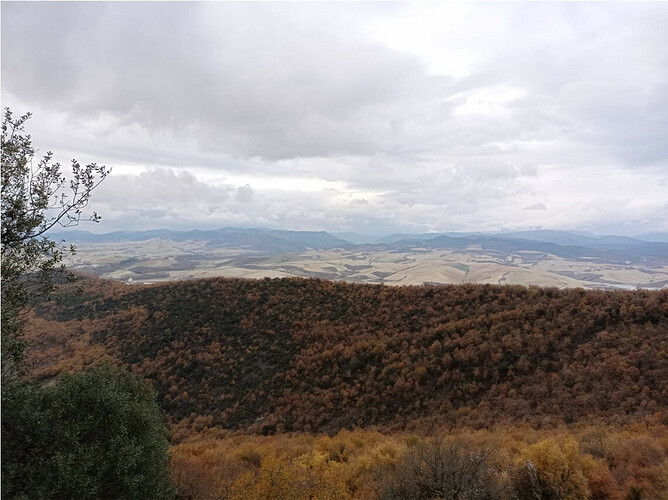 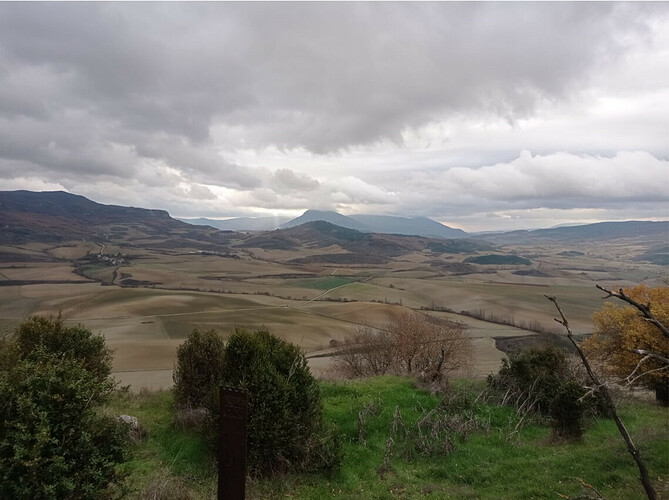 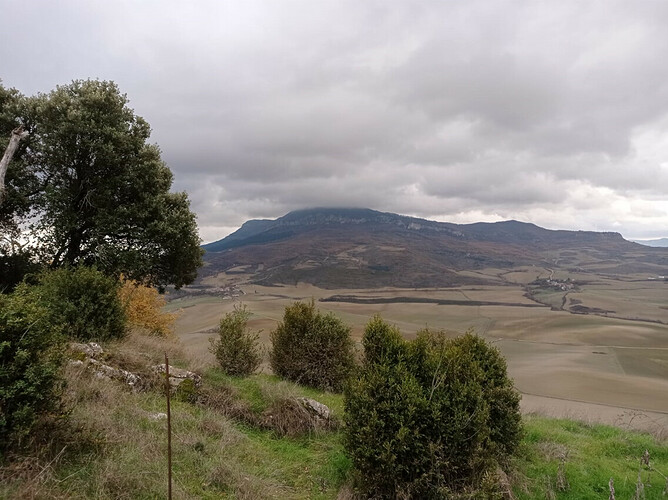 Descent was easier and quicker than the ascent because I found a good track, which didn’t match my GPS track, but I decided to follow it because it was a much better track with marking cairns and coloured marks. This should obviously be the good track to be followed by future activators.

I decided QRT and descend in the perfect time, because, as soon as I got into my car, I noticed the very first drops of rain on the windshield. See this picture of the summit taken through the car windshield: 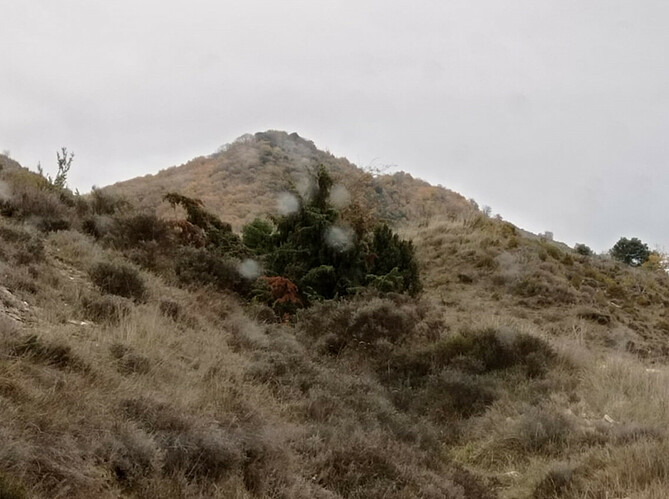 Despite the odd ascent, everything went well at the end and I definitely had another great time out in the mountains. The physical exercise of today and yesterday makes me feel very well and I think I’m going to try to keep activating as often as possible.

Thanks dear chasers for your calls and QSOs. I’ll be looking forward to copying you all again soon from a SOTA.

You are really getting out Guru, well done.

Sadly I think some cold and wet weather is coming your way from what I saw on the weather forecast this evening.

Thanks for your interesting report and pictures

Nice that it worked out between us for a QSO

All the best to you and see you soon in a QSO.

Ah thank you so much Guru. What an impressive haul of CW contacts. I had to wait patiently for a good few minutes before attempting the QSO. You were very popular today

I hope to improve my CW skills over the winter with some training.

some cold and wet weather is coming your way

Yes, the sky returned to its usual grey color yesterday and so it is this morning. I got some rain on the journey back home from my SOTA yesterday, but not much. However, they said we should start getting rain and possibly snow in mountainous areas in the next few days. We’ll see… Sometimes the media news exaggerate too much and a Polar cold wave with big snowfalls end up being just a few snow flakes not even covering the ground.

Guru, I am very glad to see your activity. Indeed, the list of contacts is impressive - this is the result of the work of an expert!
Unfortunately S2S was not with you. But hopefully the S2S winter attempts will be as successful as before.
73!
Vlad

the list of contacts is impressive - this is the result of the work of an expert!
Unfortunately S2S was not with you.

Thank you very much, Vlad, for your post. Expert or not, I consider myself quite an efficient operator. My years of DXing, listening to and learning how the good operators do it, as well as my contesting experience together with my SOTA activity on both sides of the “bar” (i.e. activating and chasing) have given me enough skills to be able to deal with a pileup in a really quite efficient way. Spending time chasing from home has helped me getting familiar with many of the regular chasers callsigns, so it’s very easy to pick them all up in the pile up. However, I can easily pick up and get back to a callsign after having heard it only once for the first time in my life. This is a very useful discipline I’ve got from contesting. It’s also good to train the brain to hold the just picked up chaser callsign in the short term memory, in order to get back to him/her without having even needed to write it down on the log, which is something to be done later while he/she is sending his greetings, signal report and 73. This allows for zero pauses and the pileup decreases really fast. Also the anxiety of the chasers gets under control when they see the other chasers are making it into the log at a quick pace.

Regarding S2S yesterday, I only worked my pile ups on the 3 different bands I worked, without looking at SW3 and going to chase other activators for S2S. The weather worsened rapidly and after the odd ascent I had, I was fearing an odd descent too, which luckily wasn’t the case because I found and followed a good descending track.

I’ll keep looking forward to making S2S with you some day.