I wanted something not too far away from home for this activation, so I chose Mt. Esparatz, which is just a 25Km drive with an elevation difference of around 570m from my QTH, but just 320m from the hiking start point in the village of Arguiñariz. 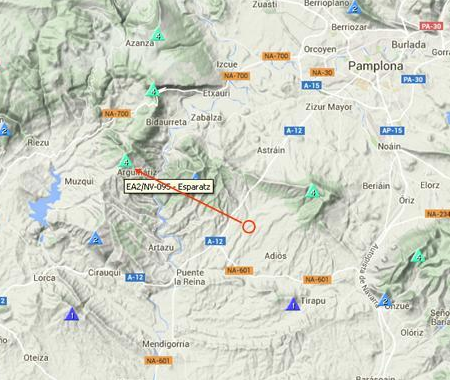 This is how it looks like from my QTH. 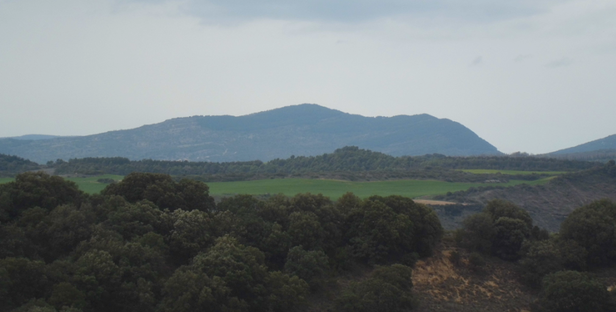 Picture not taken on the day of this activation.

The starting point is at the high a.s.l. small village of Arguiñariz, which is 250m higher a.s.l. than my QTH. I left my car parked close to other 2 cars on the grass at the side of the road and started the hike by 7h42 utc towards the church of the village at the top of the steep road in the center of this picture. 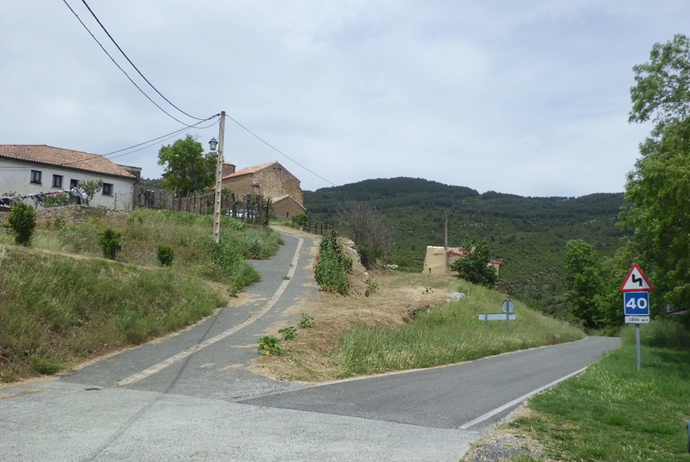 There’s a small courtyard to be walked through in the enclosure of the church and the track starts right at its far gate seen in this picture. 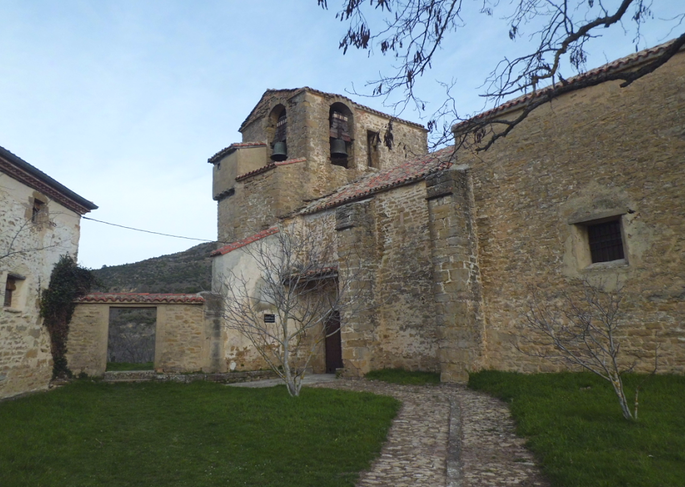 This is the GPS track I followed and I only had to pay attention at the point where it splits in 2 in order toi take the one to the left, which is shorter than the other one I wrongly followed last year. 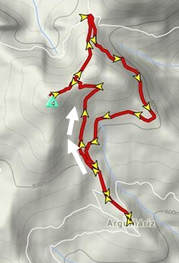 After taking the path to the left, it looks like this and it’s very clear and easy to follow, 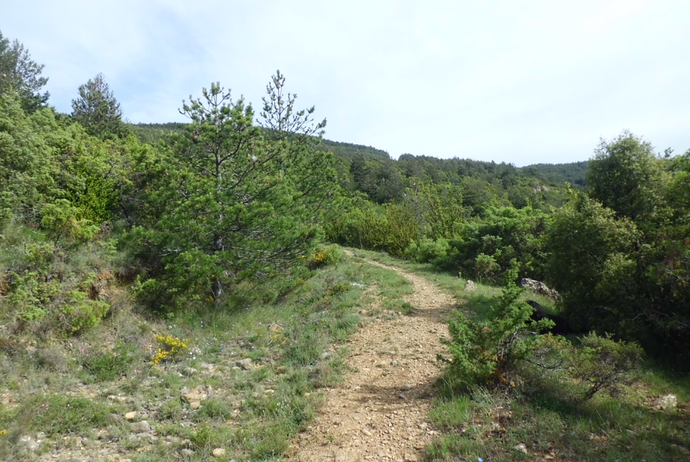 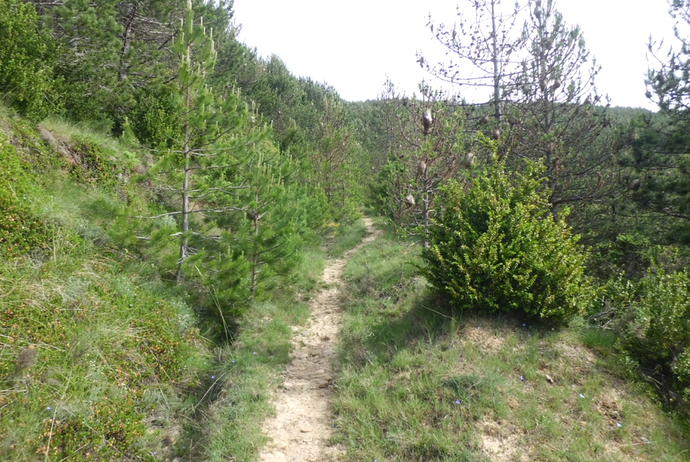 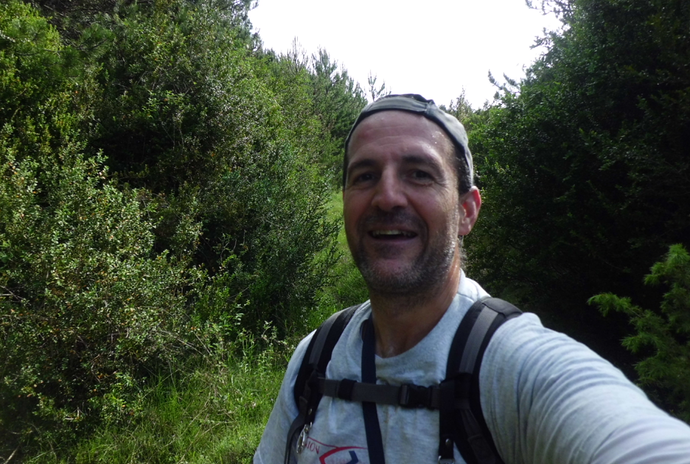 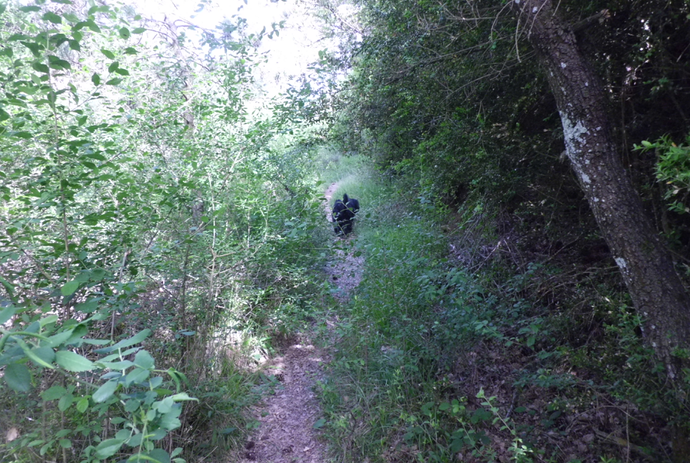 However, there is the T junction that you can find in the GPS track image where the new path to the right hand side going upwards takes you away from the summit. It’s the other to the left hand side going down, the one actually going towards the summit. It goes down for some few tenths of meters and then up to the very summit. Having the GPS is helpful to take the right decision at that point. 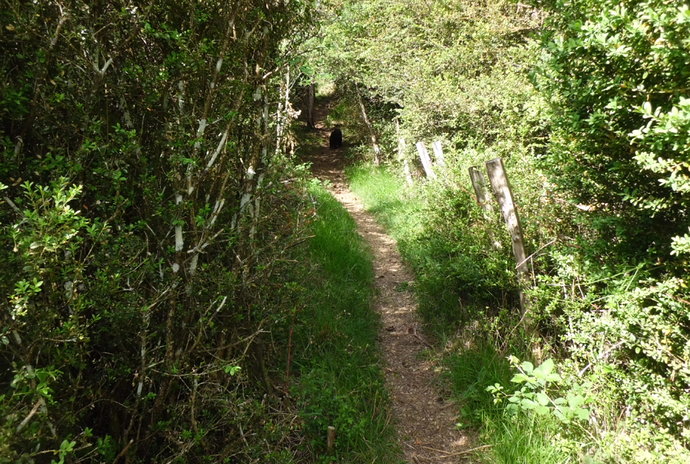 I covered the 320m elevation difference and got to the summit by 8h29 utc, so just a 47 minutes ascent including the time to take some few pictures.

This is the trig point: 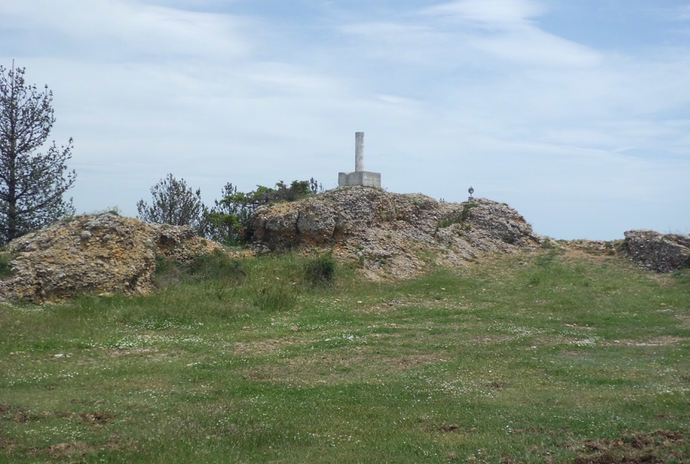 I crossed a mid-aged couple starting their descent when I was about to make it to the summit and they were the only human presence I had during my whole time in the mountain.

These are the views I enjoyed from the summit: 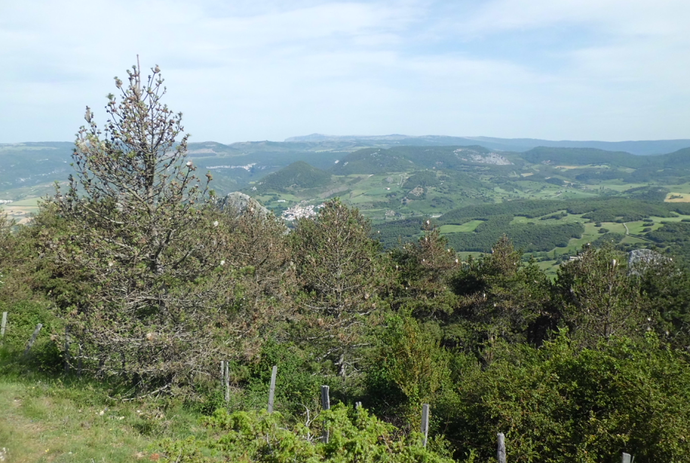 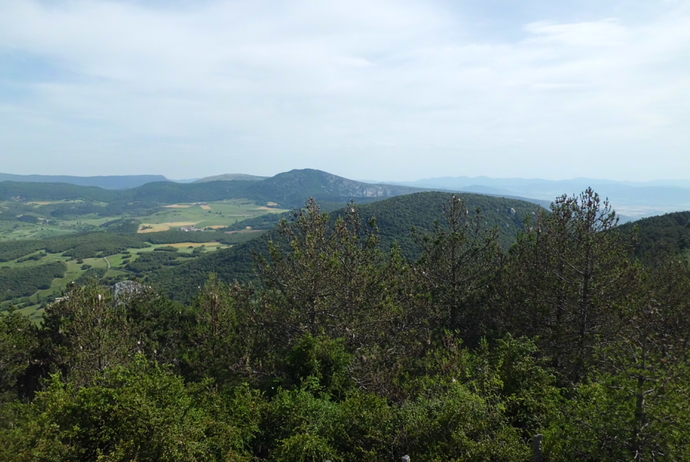 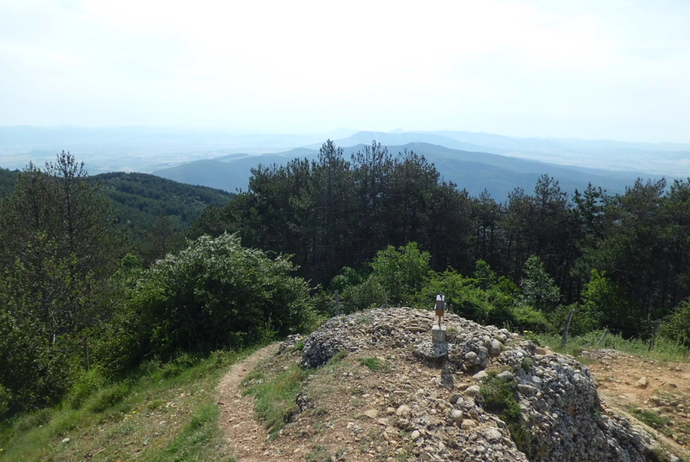 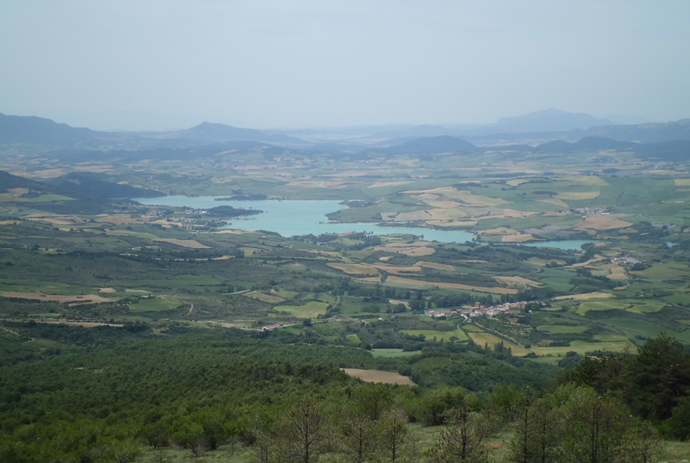 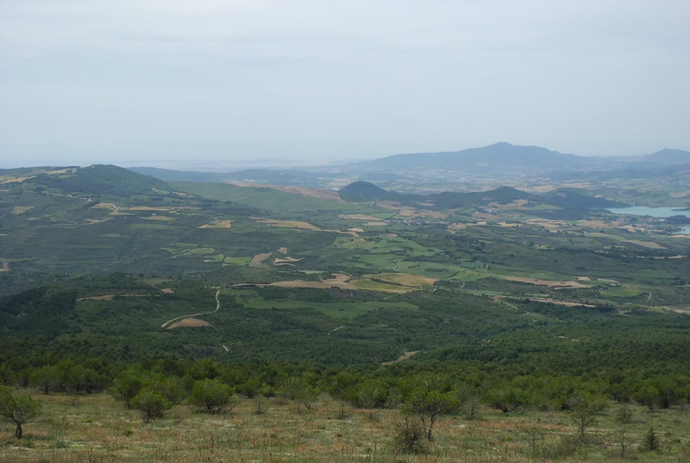 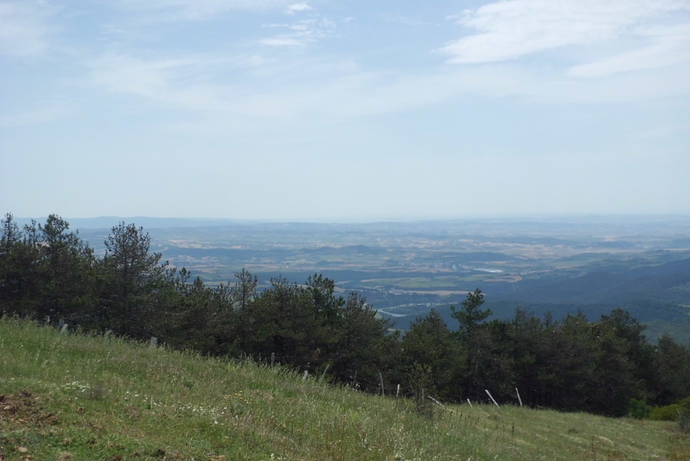 My home QTH can be seen far in the distance here.

It felt warm in the sunshine during the hike up, but as soon as I got to the summit, I found a gentle breeze so I put my wind-stopper on in order to keep the warmth and kept it on with pleasure for the entire duration of my time in the summit.

Set up was done with the 7m fishing pole tied to the trig point cylinder, the endfed wire sloping down at an angle towards the NorthWest and the counterpoise wire extended on the ground. I forgot taking a picture, sorry.

I was ready at 08h52 utc and started CQing on 30m CW, just a few minutes earlier than the announced start time (09h00). After just a couple or three CQ calls, I got the first call back from ON4FI. Then the rest of the chasers arrived and I had a short run of 16 QSOs in 16 minutes.

The surprise in the form of DX came from Matthiew KA1R, as I wasn’t expecting any Northamerican on this band this early. Thanks and congrats, Matt.

Once the 30m pile-up dried up, I looked at Sotawatch on my smartphone and found that Alberto EA2DCA/P was active on 40m SSB activating for the first time the new unique EA2/NV-172, so I QSYed and got immediately copied after my SOTA to SOTA loud shout.
Alberto passed the mic on to her partner Iratxe EA2DNO/P and we completed our S2S QSO. It was great to have this new unique under S2S mode.

There was a big contest activity on CW, so I didn’t work that mode neither on 20 nor 40m band and I went to 20m SSB instead. After finding, calling and completing S2S QSO with Terje LA8BCA/P, I QSYed up a bit and selfspotted, which produced a short run of 9 QSOs in 13 minutes.

At this point I QSYed and gave 17m a try after a selfspot on Sotawatch. However this brought not a single call back and after a few minutes, I moved to 30m to chase the activators OE/DK2CX/P and HB9BSH/P, whom I had seen spotted on Sotawatch.

Then I found a clear frequency, sent a new selfspot and started CQing on 30m again, which produced 1 more S2S QSO, this time with HB9BQU/P and 2 more QSOs with CT and OE.
My memory had an instant short circuit and I wrongly called Pedro to Carlos CT1BQH during our QSO. Sorry, Carlos

Finally, I QSYed back to 20m SSB and chased 2 more activators, one was OE5JKL/P and the other EI3KA/P. 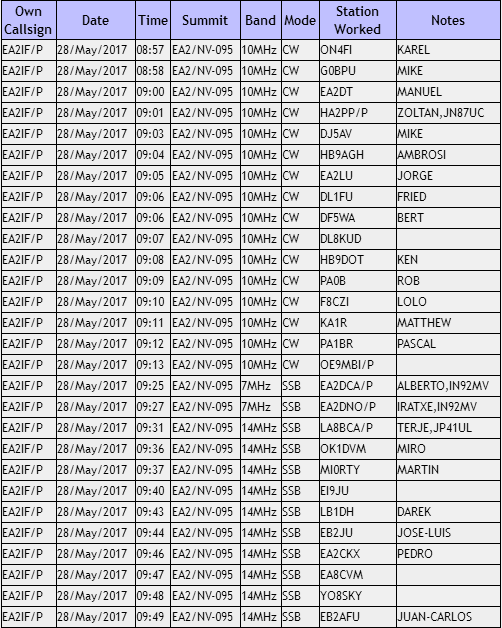 At one point during the operation, the wind took my SOTA hat off. It landed on the not too high branches of a nearby pine tree and got hooked in a way that it fortunately remained there until I easily recovered it at the end of the activation.

After the SOTA hat recovery, it was time for me to pack up and descend, so I proceeded rapidly and got home in time for a refreshing shower, changing clothes and a nice lunch with my family.

Here you can see this picture of the village church when I was about to complete descent. 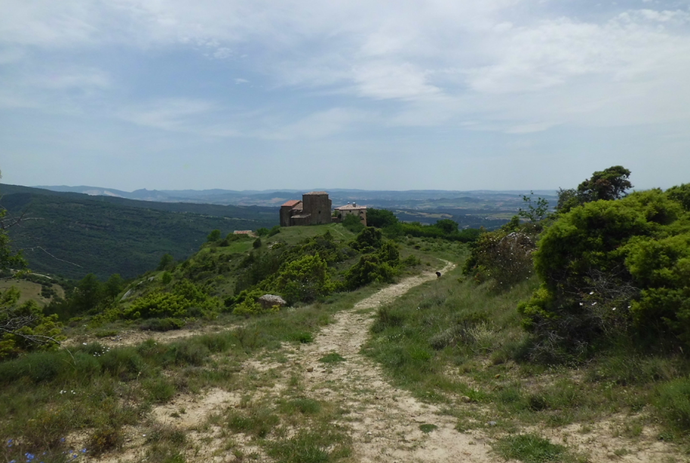 And here is the just activated summit as it looked like from this same point. 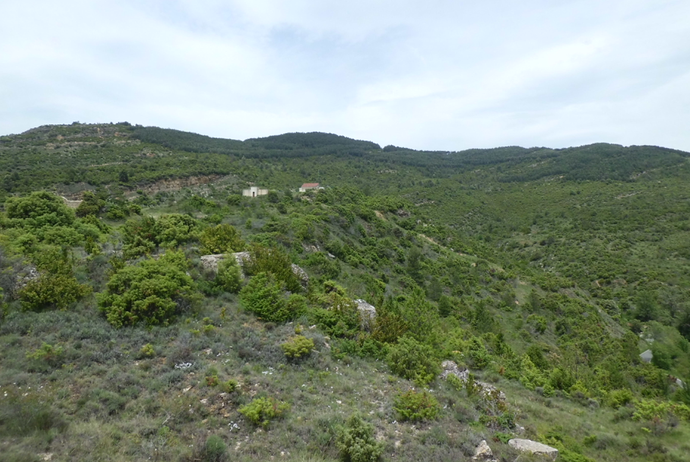 Not far after having left the village, I stopped my car and without getting myself out of it, I just got my hand out of the car window to take pictures of this amazing number of vultures that seem to always gather here on top and around this building. I presume they are feeding them here. As you can guess, there was a very nasty smell in the area and there were dozens of these big vultures on the roof, the ground, the nearby trees and flying above. Quite impressive… 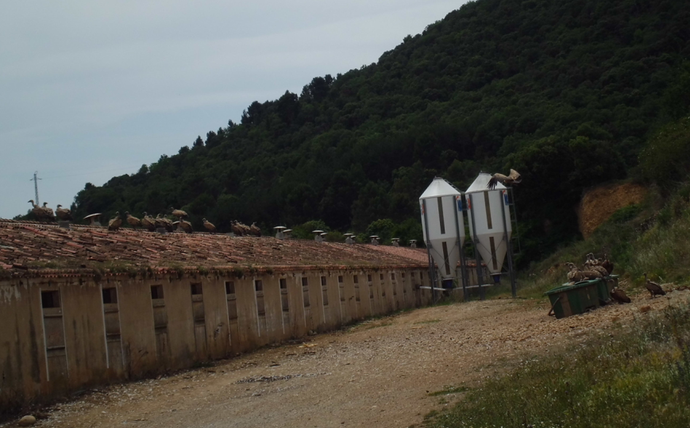 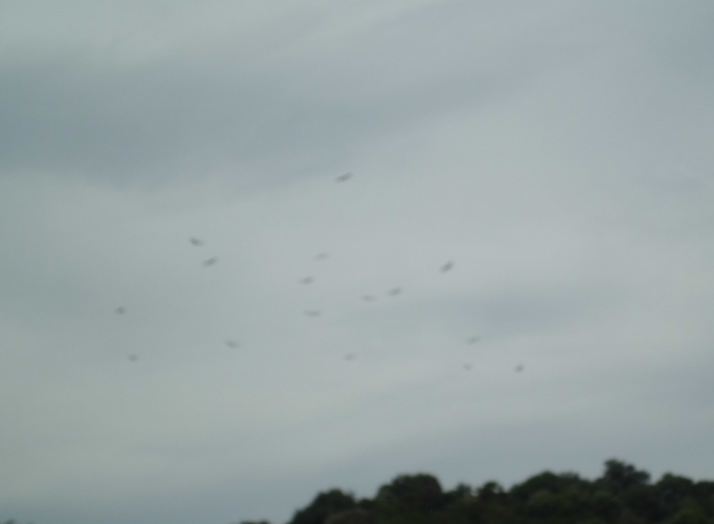 On my way home, I stopped a couple of times to admire and capture these pictures of the Arga river. 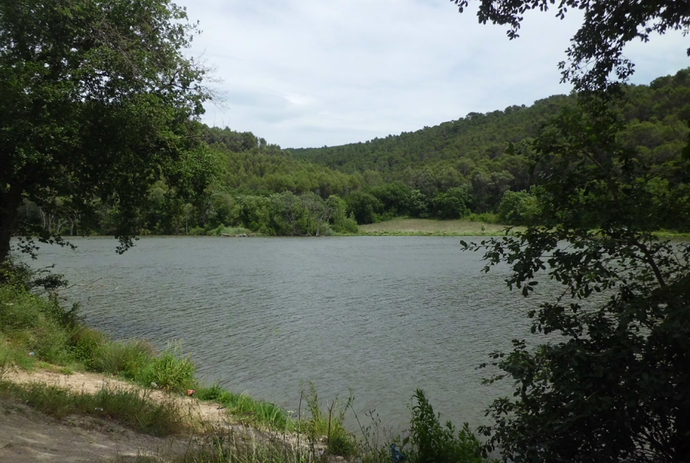 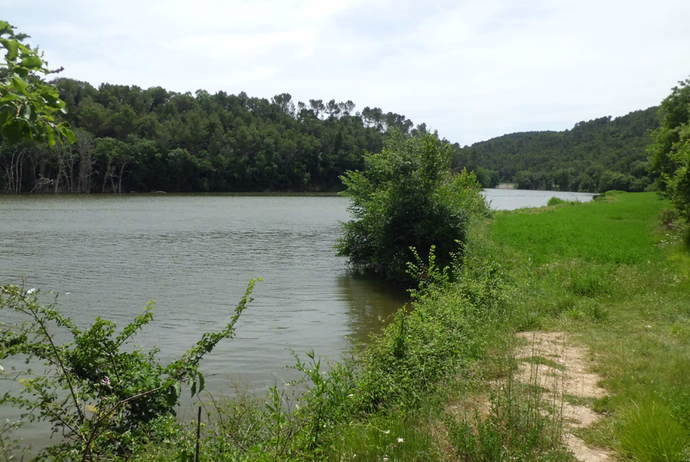 Thank you very much dear chasers for your calls and QSOs.
I’ll be looking forward to copying you again soon from another summit.