Mt. Bréamo was the chosen target of the day. It’s by the Atlantic Ocean and the village of Pontedeume is right at its base.
This is a picture of it taken after the activation on my way back home. 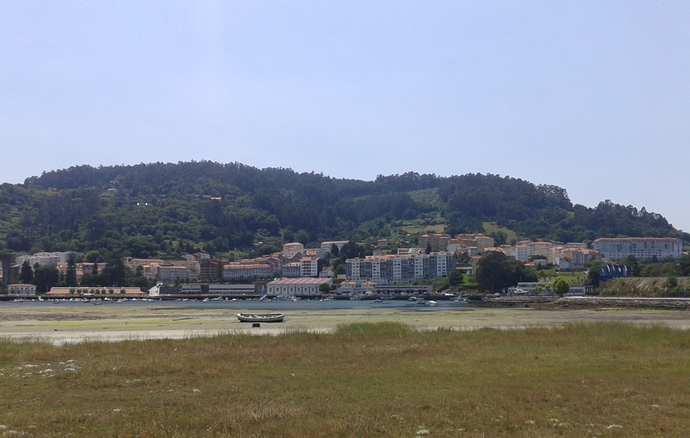 There’s a dense forest covering this mountain and it’s even hard to find a spot to enjoy some good panoramics. There’s a pretty steep road up to the very top, as there is a XII century ermitage devoted to San Andrés (Saint Andrew) on its top, which makes it a very popular and visited place
These are a couple of views I could take from the road during the ascent. 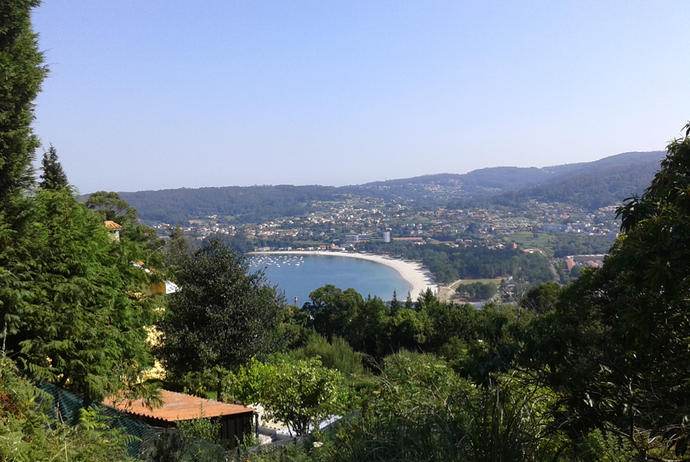 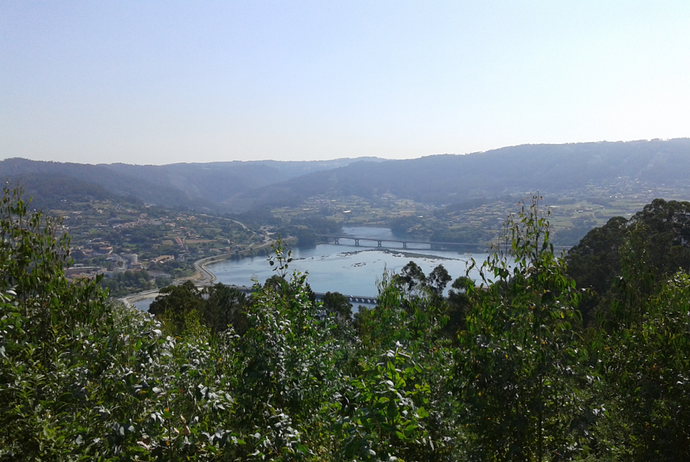 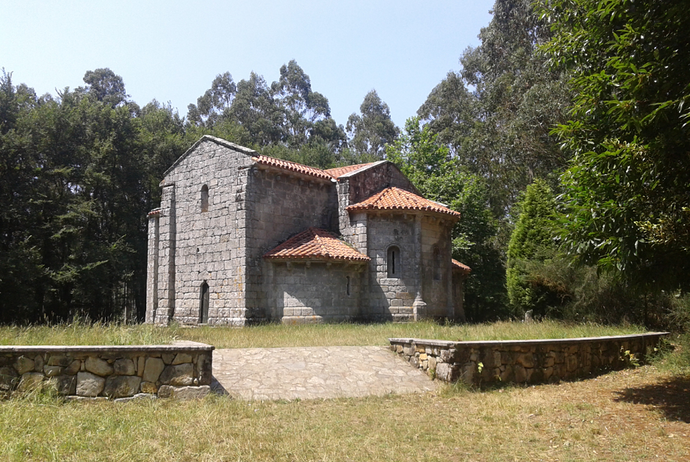 At the summit, there’s a nice picnic area with granite round tables and benches, as well as some BBQ’s for visitors. 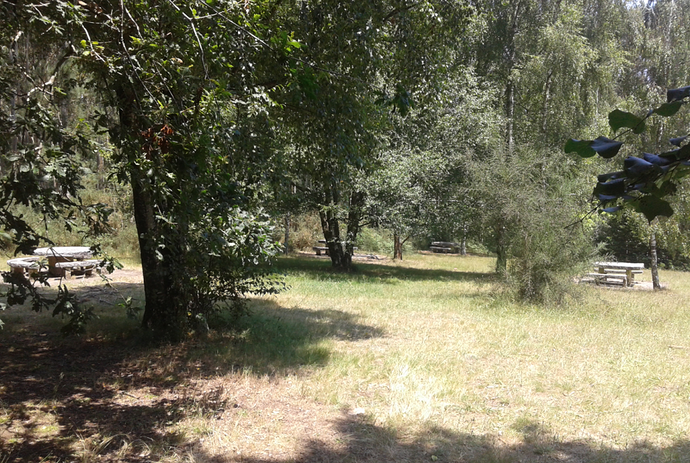 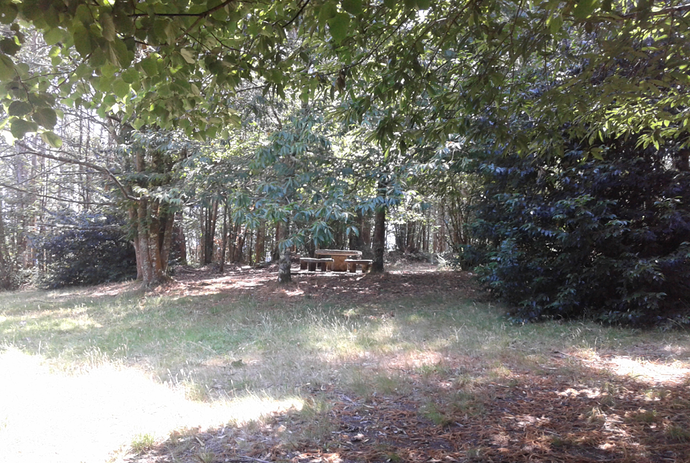 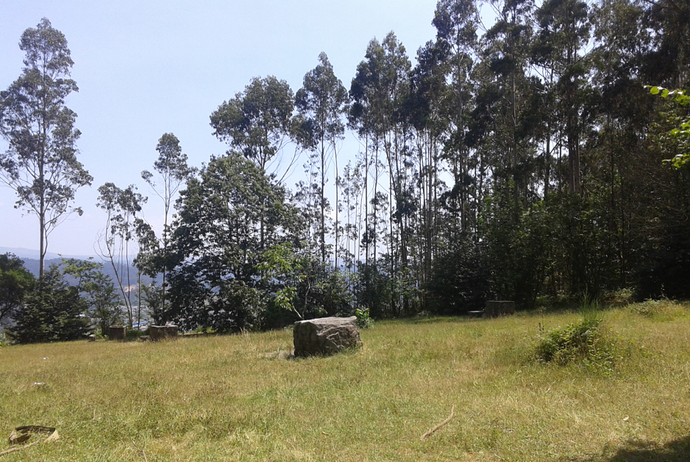 Here you can see how I tied the 7m telescopic fishing pole to the broken trunk of this young tree. 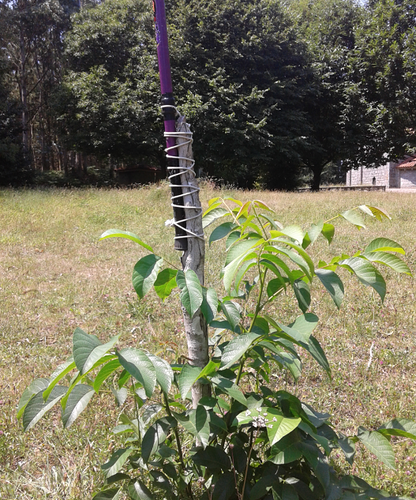 This is the complete view of today’s set-up: 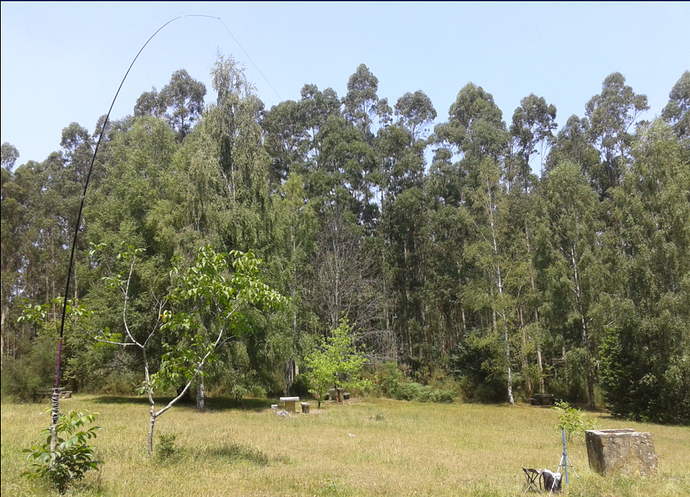 This was the operating place, under the sun of a really hot summer day. 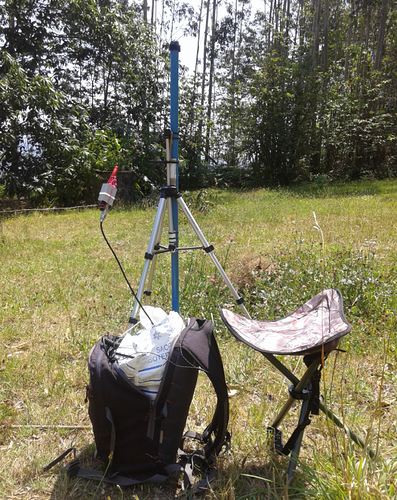 As soon as I switched ON my FT-817ND, I noticed the same weird effect I had in my previous activations of this summit: the bands sound so unusually quiet that I had the feel that something was broken in the coax or the antenna circuit, but the SWR readings were nothing different to the usual ones and the different stations calling were copied, although signals were much weaker than usual. The problem was that everything copied was highly attenuated. It sounded as if I had a permanent 30dB attenuator on. There must be something in the ground or the base rock of this mountain or it’s possibly the effect of the very dense forest with very high trees. Who knows, but the fact is that pretty much all signals were weak and not any DX was worked from this summit.

I started on 20m CW and had a run of 7 QSOs in 5 minutes.
With no more chasers, I QSYed to SSB, selfspotted and started with a S2S with Luc DL/ON7DQ/P activating DM/BW-057. On 20m SSB, I had a run of 16 QSOs in 33 minutes, with several stations from Spain in the log, which proved that propagation conditions were short as in a typical hot summer day.
When 20m SSB dried up, I QSYed to 40m CW, where I managed to log 8 QSOs in 56 minutes. This low productivity was due to some time spent showing and explaining what I was doing and what SOTA is about to a couple and his young teenager who approached me when I worked DL/HB9BQB/P activating DM/BW-284. Also because I spent quite a long time unsuccessfully trying to work S2S with HB9BIN/P activating HB/NW-008. After gaving up and QSYing for other QSOs on the 40m band, I finally found and worked Juerg HB9BIN/P later, possibly on a different frequency.
I also spent quite a long time CQing on 40m without any response. That’s why I finally left this band and moved to 30m, where I logged 7 QSOs under sometimes very difficult conditions with mostly weak signals, as in all previous bands, and a severe QSB.
After a failure on a first try due to QSB, I finally completed the QSO with Klaus DL2YBG at 12h06 utc and this was for me the time to move, I gave 17m a quick and unsuccessful try and then returned to 20m CW in order to give Northamerican chasers a chance.
But this RF attenuating summit, the short propagation conditions or both didn’t let me log any single DX from across the Pond nor anywhere else.
This second round on 20m CW let me log 8 QSOs, one of which was a S2S with DL/OK1CZ/P activating DM/BW-057.
It was hot and sunny and I was feeling hungry, thirsty and tempted to switch off and go home, but I checked SOTAWATCH and saw there was an activator on 20m SSB, so I QSYed and managed to log a S2S QSO with OE3IPU/P activating OE/KT-072.
When I was about to finish this QSO, I got a call asking me to QSY up 5 for S2S QSO.
There I QSYed and I managed to log a S2S QSO with OE/IN3ADF/P activating OE/TI-136, but this was not easy with very weak signals and severe QSB.

Despite this difficult HF wise summit, all in all, I managed to have good fun on the air and log 48 QSOs, 6 of which were S2S.

Thank you dear chasers for your calls and QSOs.

I’ll be looking forward to QSO with you again soon from another summit.

It looks so nice from those photos I feel like getting a plane out to EA1 an activating it myself right now!

It looks so nice from those photos

Makes a lovely antidote to your GM/CS photos

Makes a lovely antidote to your GM/CS photos

I also found great those photos. Your country looks beautiful to me.
The only thing I didn’t find so great was the part when Andy was describing the splashy steps, the mud and the wet boots and socks…