My friends Ignacio EA2BD and Jorge EA2LU raised an alert last night anouncing their plans to do a joint activation today. They informed about that through our whatsapp group and as soon as I checked and confirmed that their timing was compatible with mine, I decided my target and raised an alert too.
After dropping my 8 years old son to his daily sailing training, this morning, I headed to the top of Mt. Bréamo which is a drive on summit with an XI century ermitage -San Miguel of Bréamo- and a nice picnic and BBQ area. 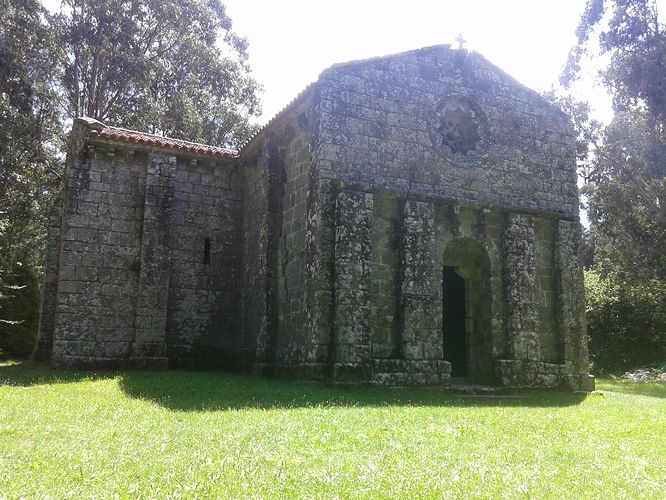 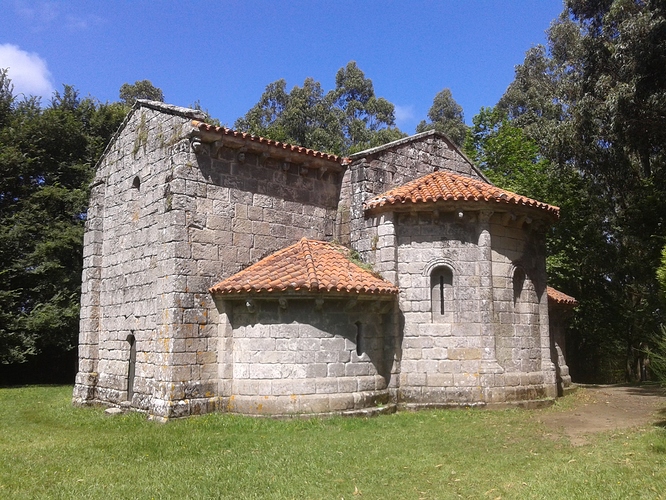 Some of my previous activations of this summit had left me with a weird negative feel because I sometimes had too few QSOs with pretty low signals. Last Saturday I had a chance and tried to activate this summit with my MTR and the mobile whip, but when setting-up the little MTR fell down on ground and its little weight was enough to pull off breaking the soldered coax at the antenna BNC connector to my SWR meter. This forced me to cancel the activation.
With all this background, I decided to try something different today.
My 7m telescopic fishing rod is starting to show signs of severe wear at the overlapped fitting of 2 intermediate sections, so I recently bought a new one for 13.99 € at Decathlon.
Having 2 of these telescopic fishing rods now in the boot of my car and being this a drive on summit, I couldn’t resist using both of them for today’s set up.
I extended horizontally 21m of thin wire between the top of my two 7 meters long telescopic fishing rods.
Here are some pictures of it where I have drawn a red dashed line for you to see the otherwise almost invisible thin antenna wire. 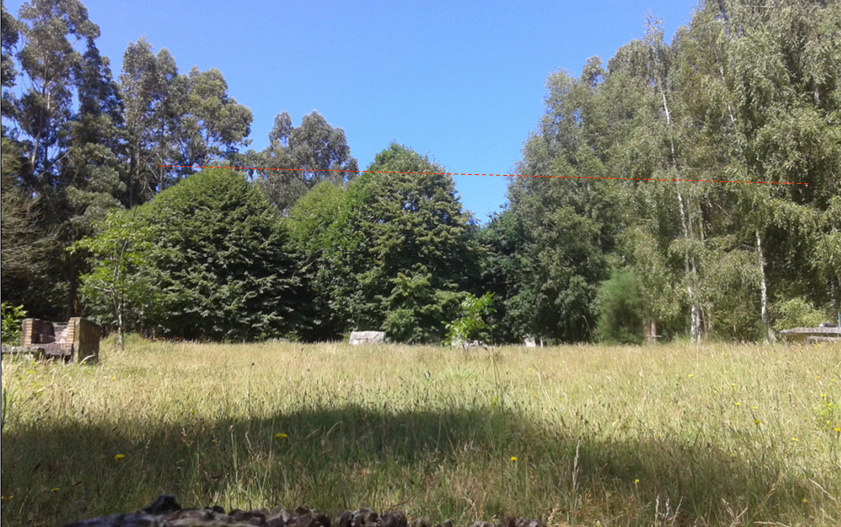 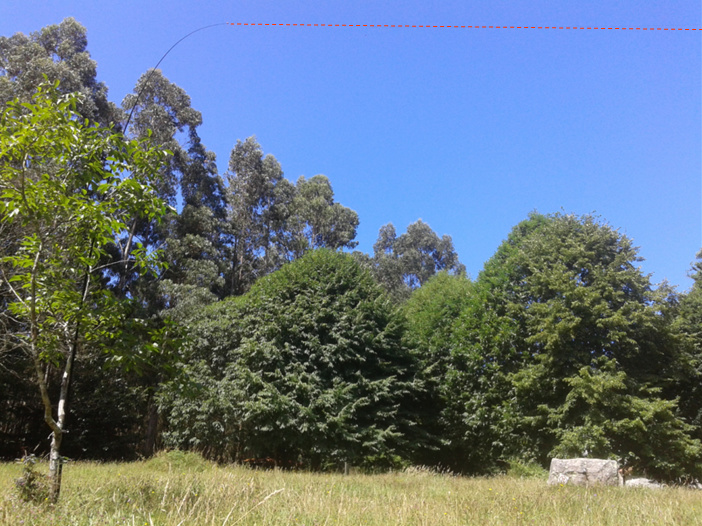 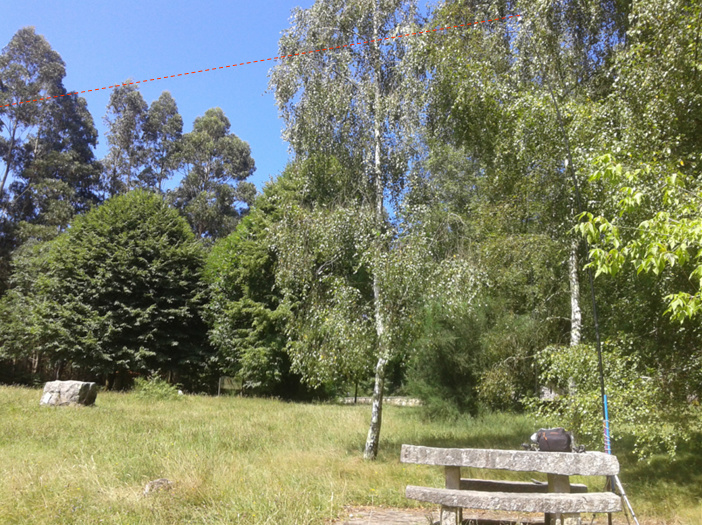 This following picture shows the dashed white line I’ve drawn for you to see the counterpoise wire sloping down from the 9:1 un-un to ground. 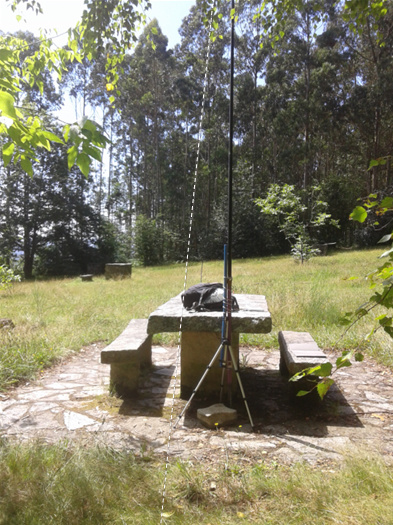 As you can see, I had a luxury Flinstones-style shack today: 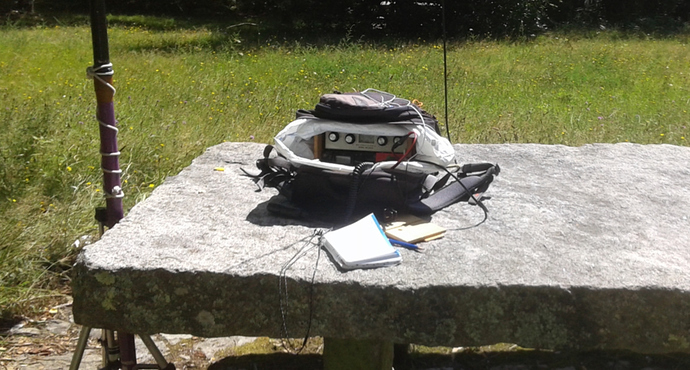 As soon as I completed my set-up and switched on my rig, I noticed higher signals and a much more lively 40m band activity than the quiet background noise I remembered from my previous activations here. Good sign!
A first look to SOTAwatch and I found Ignacio EA2BD/P spotted on 40m SSB. I was just a few Kc up from him so I immediately QSYed there and called him. We innaugurated our respective logs with each other and that was very cool. Perfect timing!
After this first S2S, I QSYed to 20m CW to chase Jorge EA2LU/P. He picked up my S2S immediately and we completed our S2S QSO with pretty good signals.
Then I QSYed to 30m, where I logged 13 QSOs including two S2S with Hannes HB9AGO and Fabio IK2LEY/IN3.
When 30m dried up, I QSYed to 40m and there I found again Jorge EA2LU/P, so I gave him a new call and our S2S on a new band got logged. After this S2S, I QSYed to try to CQ on 40m CW but I saw on SOTAwatch that there was an activator spotted on 30m, so I QSYed there to have a S2S QSO with Thomas HB9EVF/P.
After that, I QSYed back to 40m CW and had the pleasure to find by chance and have a S2S QSO with Martin OE/DK3IT/P.
I found a clear frequency on 40m CW and called CQ to log 5 more QSOs, one of which was a S2S with Paul DL6FBK/P.
When 40m CW dried up, I QSYed to 20m SSB. There I logged 7 QSOs the last of which was a S2S with Holger OE7HPI/P, whom I called to after I saw him spotted on SOTAwatch once I had not any more chasers on my frequency.
I was running out of time as I had quite some stuff to pack up and a drive of nearly 15-20Km to pick up my son after his sailing training session.
A quick QSY to 20m CW let me log 5 more QSOs in my log.
When there were no more chasers calling, I QRTed, packed up, descended and arrived just in time to pick up my son. All in a perfect timing! 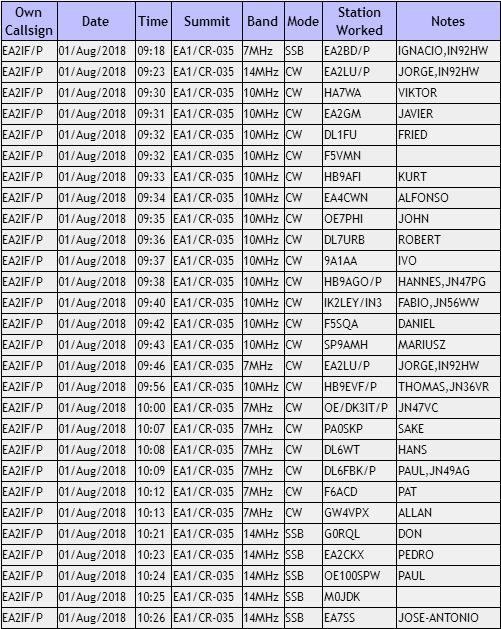 Thanks dear chasers for your calls and QSOs.
It was a great pleasure for me to have this new set-up performing sucessfully and having all these S2S and regular QSOs.

Thanks for the S2S.
I was here: 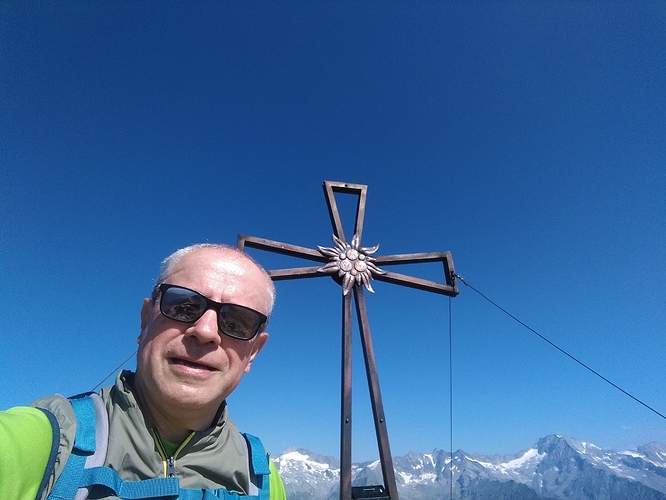 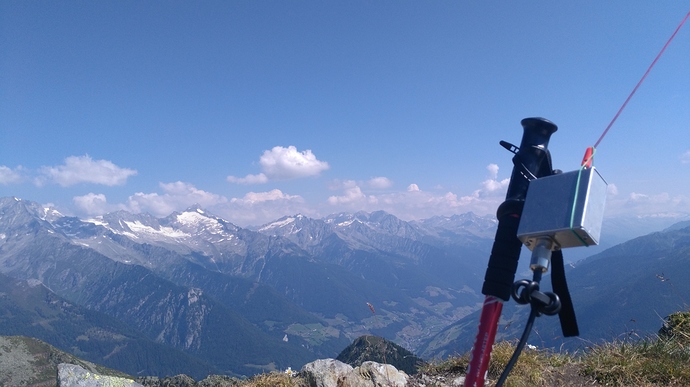