I had spotted this never-activated-summit some weeks ago and I decided that I would attempt to activate it today because the weather forecast said we would have good temperatures and not rain.
The GPS track I downloaded from Wikiloc is the one you’ll see in these maps:
This one shows you the location with respect to Pamplona. It was about 80Km drive from my QTH. 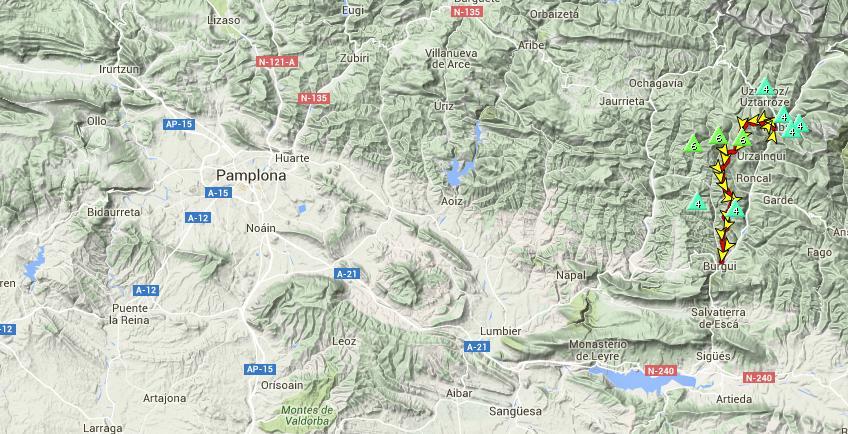 This is a closer look of the GPS track I followed. 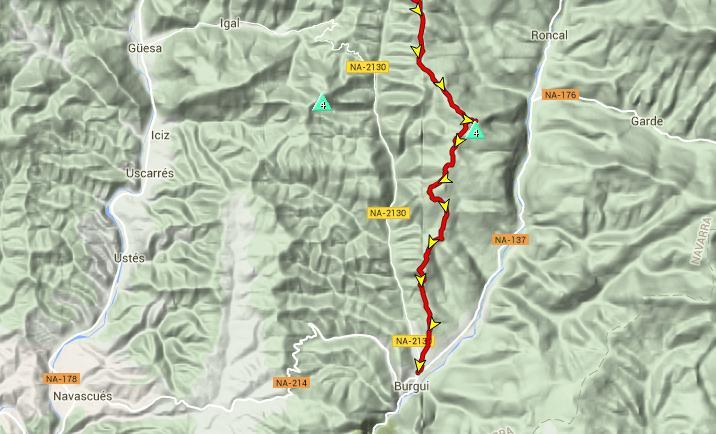 I woke up at 5h30 utc and left home by about 6h15. There was a dense fog most of the time so the driving was slow and careful. A couple of minutes after 7h30 utc I was parked at the starting point of the hike near the village of Burgi.

In my alert, I had announced my activation start time at 9h00 utc and I clearly underestimated the hiking time, as it turned out to be a really long hike.
The track is good, easy to follow most of the time and not too steep but it’s long. However, I wouldn’t advise anybody to do it without the help of a GPS, as it’s fairly easy to loose or confuse the track at certain numerous points.
It took me 2h45 to get to the summit. The altimeter in my new SOTA watch told me the height difference was 581m.

When I finally gained enough height, the views I found were just beautiful: 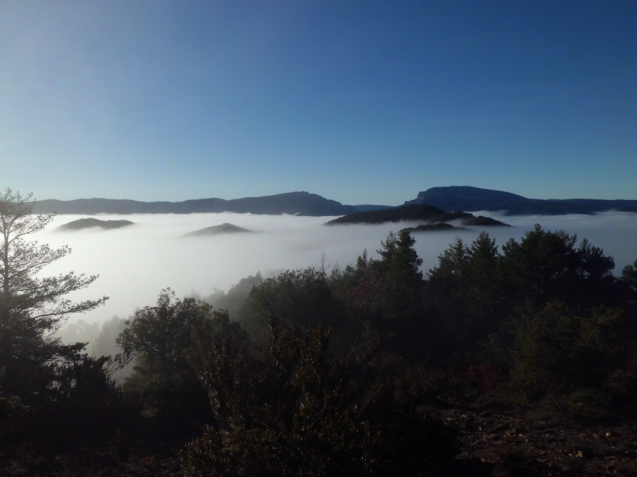 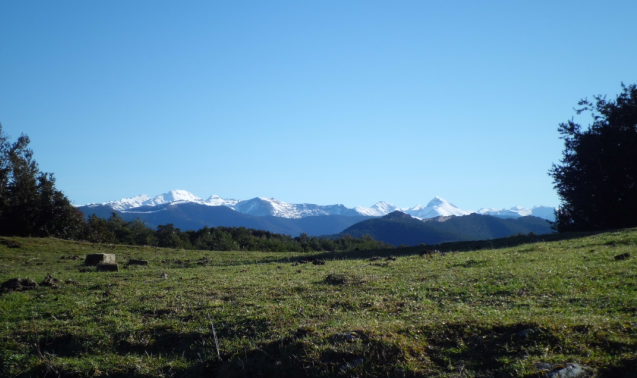 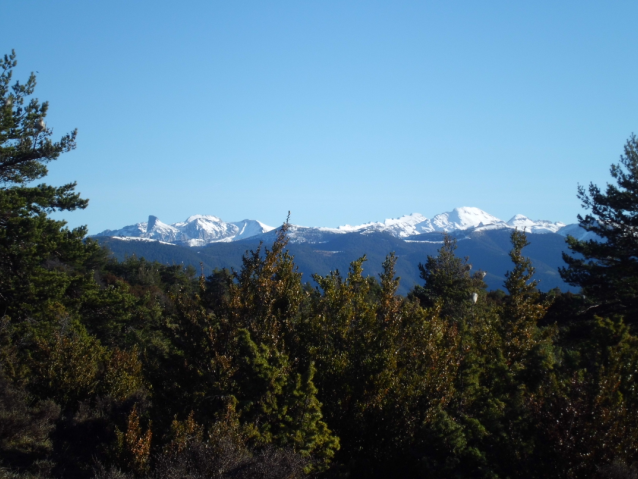 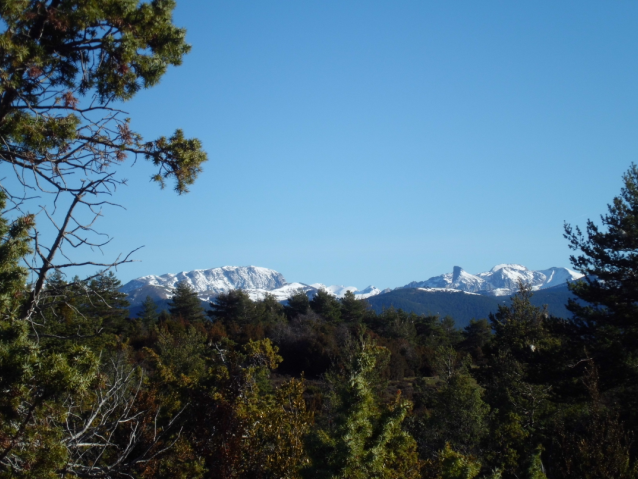 We finally got to the summit: 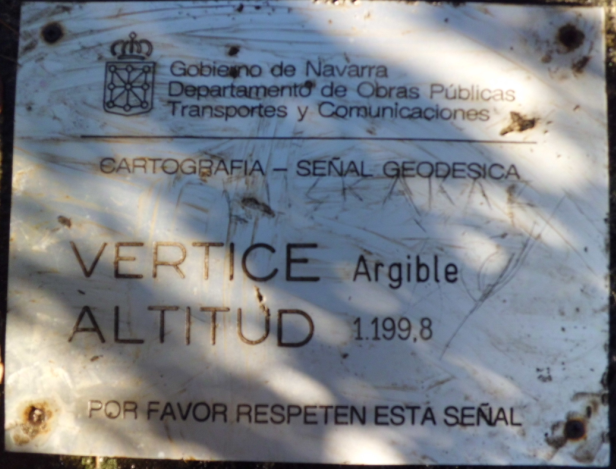 And I installed the GP attached to the trig point cylinder with the wire radials elevated and more or less horizontally placed over the bushes. 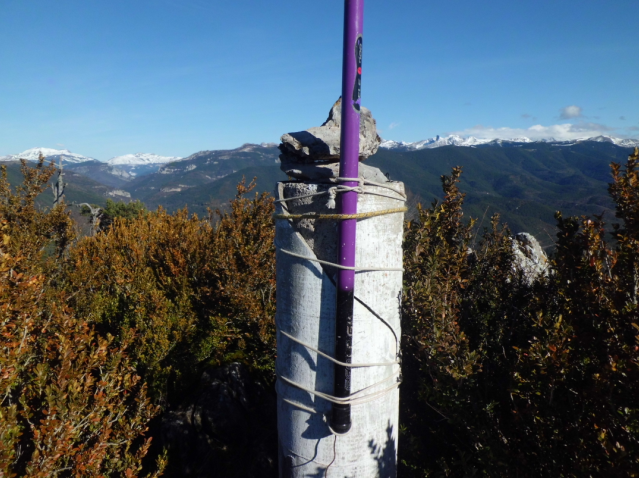 I was a bit exhausted so I felt really pleased when I sat down on a rock and prepared myself to start the activation while eating a ham and cheese sandwich and drinking some water.

I switched on my rig on 20m and found around 14.062 an activator (OE1MV?/P) calling CQ SOTA. I tried unsuccesfully to drag his attention for a S2S QSO, so after a few tries I decided to give up and started my activation on 30m

Jorge EA2LU chased me first and we agreed a quick QSY to 10m, as he was in a hurry to leave home and I wanted to give him this new unique for the challenge.
I QSYed to 10m and was chased by my 2 mates Jorge EA2LU and Ignacio EA2BD. A few more CQ calls without response and I QSYed back to 30m, where I had a good run of 21 QSOs in 20 minutes, one of which was a S2S with Rolf HB9DGV from HB/SO-020.

Suddenly, I heard on my HH an activator on 2m FM, so I called him and we completed S2S QSO. It was Raul EA2DYM from EA2/SS-056.

Then back to 20m SSB, where 2 more stations called me and made it to the log.
When no more callers were heard, I QSYed down and found Eloy EA1IEH/P activating EA1/SO-003. I shouted S2S and he immediately picked me up, so we completed the QSO with great joy mainly for the unexpected of our meeting.

Again I heard an activator on my 2m HH. It was Santi EA2BSB/P activating EA2/NV-120 and he was very glad when I called him because he had been trying to contact me from home when I was on 10m and 30m without success. We completed the S2S QSO and Santi got his new unique. Great!

Taking advantage of the longer duration of my new LiFePo4 battery, I decided to give 15m a try before QRT. My dear mate Ignacio EA2BD spotted me and I managed to log 2 more QSOs on this band. One was with Manuel EA2DT and the other was with George N1GB, the only DX of the day in my log. By this time, after an hour and a half sitting on a rock I was tired needing to stand up and move, so after a few unresponded CQ calls, I decided to QRT. 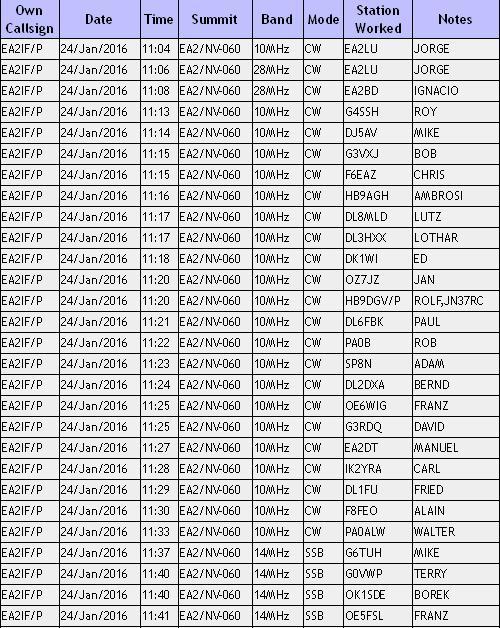 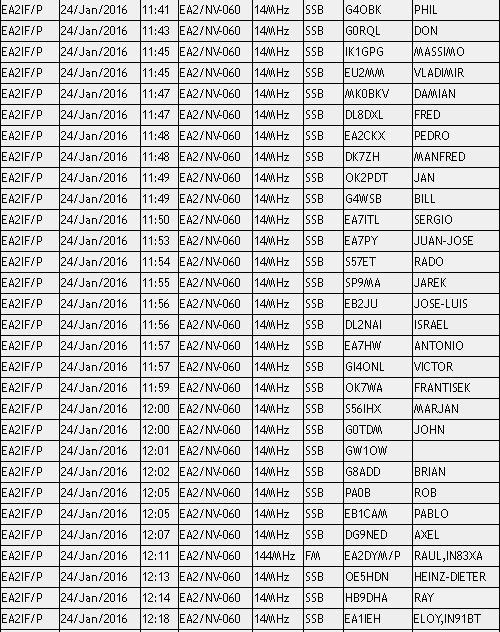 Thank you very much for your calls and QSOs.

This was my view from the operating position: 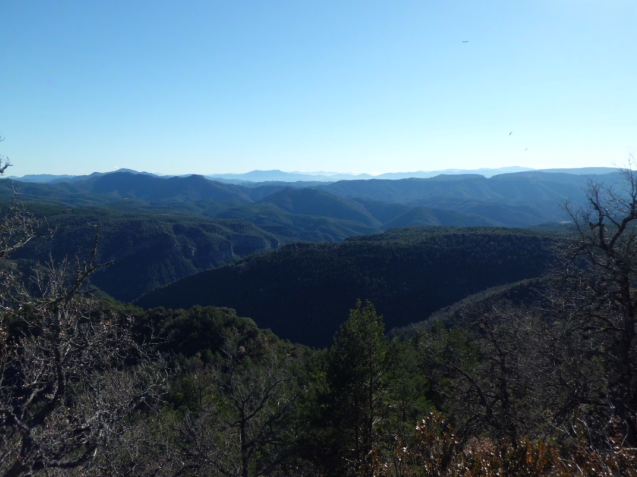 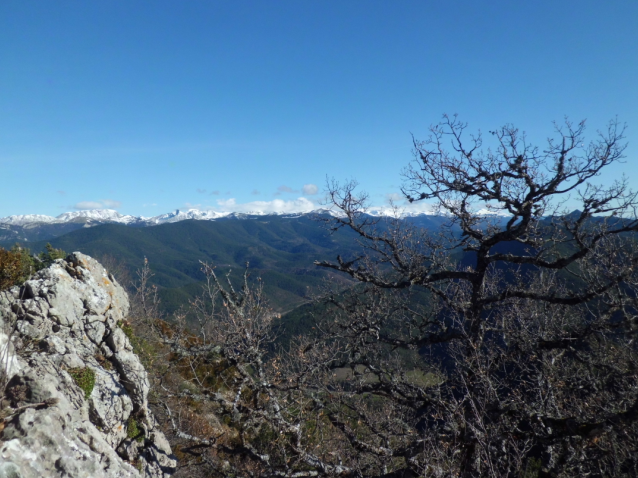 After having packed up and before leaving this great peaceful place, I made a selfie: 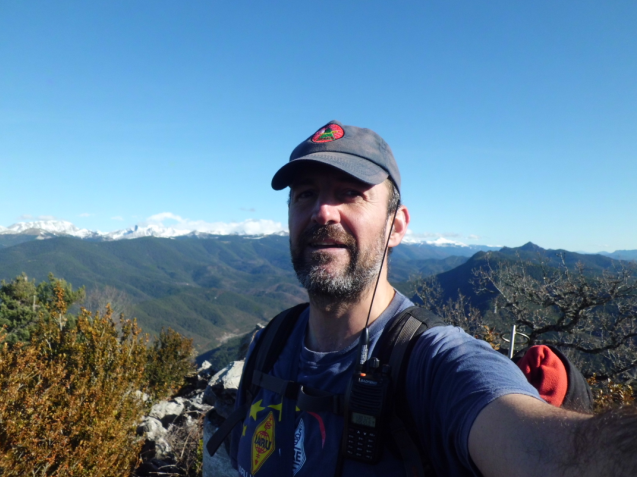 And a few more pictures from the summit and during descent: 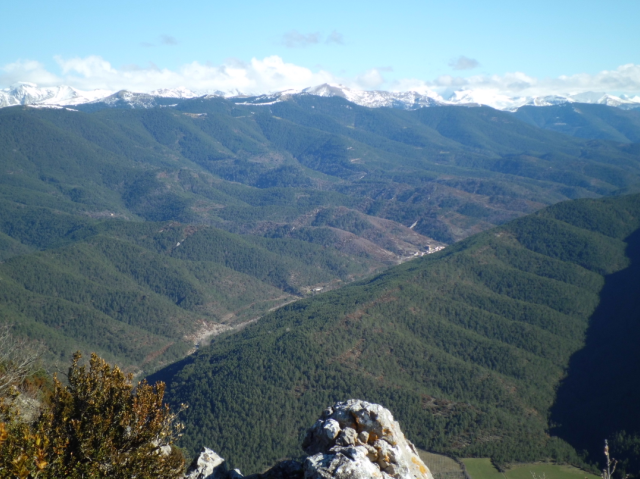 This is one of the branches of Roncal valley with the village of Garde seen at the bottom. 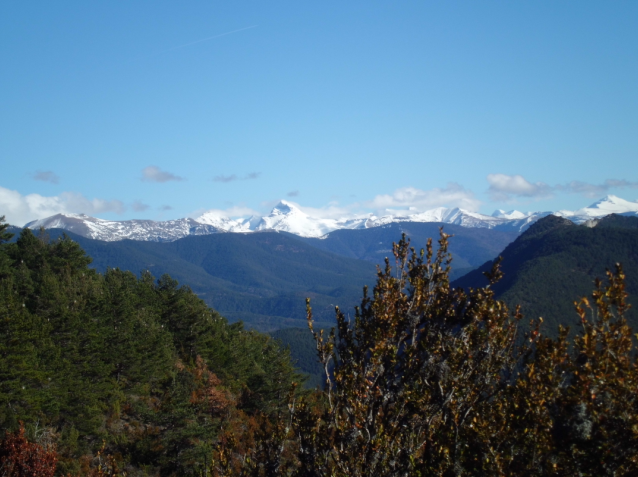 Some clouds were developping around the white summits of the Pyrenees. The bigger peak in the center is 10 pointer Mt. Bisaurin EA2/HU-057, the highest mountain I’ve ever hiked (2670m asl). It was long before SOTA programme was created. Maybe I’ll get back some day when the snow had gone. 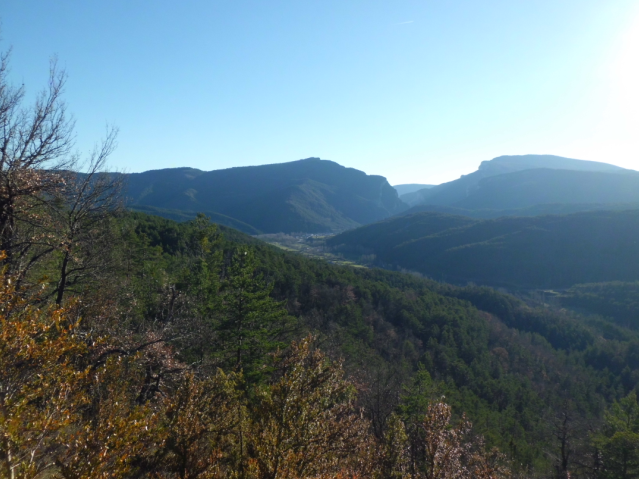 The village of Burgi down there in the valley. There was still a long way to get to the car… and I was quite tired by that time.

Today’s activation required more effort than other activations I use to carry out.
I spent 12 hours out in total for activating a new unique.
This was for my enjoyment and also for you all, of course, but I want to dedicate this activation to the memory of Eric KU6J, who gave us so much. RIP Eric…

Best 73 to you all and have a nice week.

I’ve been reviewing the spots raised during my activation yesterday.
Thank you, Mike @G6TUH, for raising a good spot after the one mistakenly raised F8FEO.
This was the wrong spot:

This is the good one:

@F8FEO was the last who worked me on 30m CW when I was announcing my QSY to 20m SSB and after our QSO he kindly offered to raise a spot for me on 14.305, the frequency I told I would QSY to.
It looks like he wrongly believed he had worked Marcial EA2WX and so his spot stated. If you see this, please, correct your log.

It was good that I immeditely realised of the possible wrong spot when Mike called me Marcial and said my callsign as EA2WX during our QSO.

After reviewing “WHO CHASED ME” I’ve found this:

I didn’t make QSO with @HB9JOE and he must have worked Marcial EA2WX instead of me.
But Marcial EA2WX/P was not with me at EA2/NV-060, so his summit reference must be different. You better find it out and correct your log entry.

Question: would it be possible for someone with the necessary rights to access the SOTAWATCH spots history to delete that wrong spot raised by F8FEO?
It will help to avoid possible confusions. Thanks in advance.

Regarding the vultures hovering over me, as I informed Phil @G4OBK and others during our QSOs and Phil reported in his spot, let me tell you that they were flying over me quite closely while I was in silence with my earphones working CW, which means they were presumably seeing me as a potential lunch. Fortunately, I switched to SSB and a pretty much still and quiet lunch became a noisy one so they finally flew away to probably look for some quietter lunch.
Who said CW is better than phone?

Seems like you had a really good day and even survived the vultures, can’t be bad! I’ve only seen vultures once and that was in a zoo

If you come over some day, I’ll be pleased to get you visit the Foz de Lumbier and you’ll see hundreds of them in a beautiful natural environment. 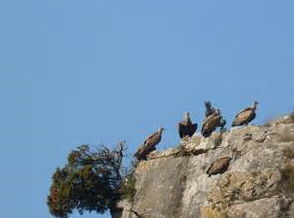 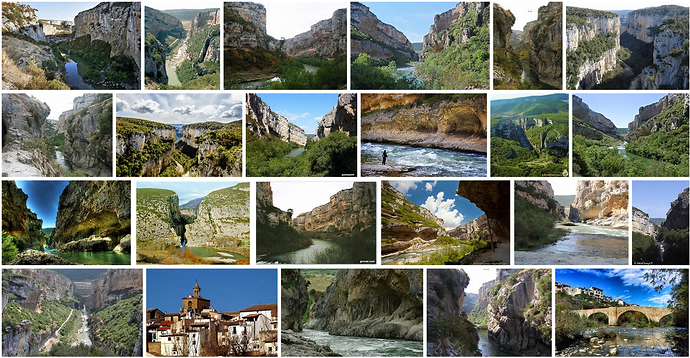 Ah ha Guru, we are both pleased the vultures did not eat you

Sorry for being stupid at first, my only excuse was the splatter across your frequency!
Night night.
Mike

Sorry for being stupid at first, my only excuse was the splatter across your frequency!

The splatter, my little QRP power and the wrong spot on Sotawatch induced you to error. Nothing to do with stupidity and definitely not your fault.
Best 73,