On the last weekend of no permits a weather window opened up for an overnight hike & early morning activation of Mt St Helens. The trail was covered with snow to the parking lot. I hit the trail at 1:20am and made good time to chocolate falls on skis. Somewhere heading up the ridge I had to make the switch to bootpacking the skis. Heavier backpack, but faster travel overall.

I made the seismic station just before 4am and took a long break there to eat breakfast. This is also a great spot to put crampons on because it is the last truely flat spot on the hike. Even with soft snow, there’s no telling what snow/ice conditions you may encounter on the upper mountain. 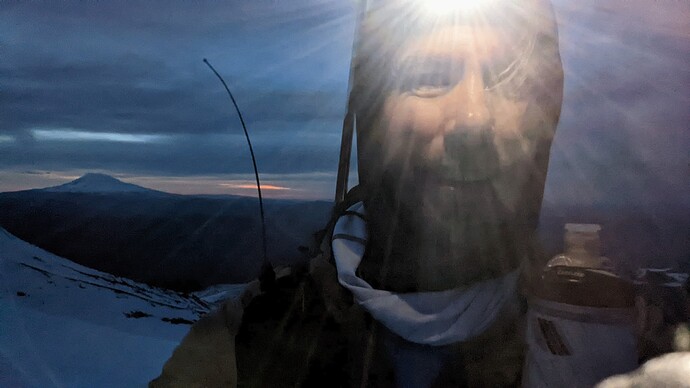 With crampons on I continued up and up forever. I was making good time and reached the final pitches just before dawn. Clouds were blowing above me and I made the decision to forgo checking out the views from the crater rim and instead head straight for the true summit and Activation Zone. This route has a steeper traverse, but no up and down and up of the rim traverse.

In the final 100 feet to the summit the wind really picked up. I put on all my layers and got my radio out. My first QSO of the day was with K7ATN in North Portland. A good 2m pileup commenced.

For HF I didn’t want to try to get a mast in the air. Too much wind. I instead laid my random wire out on the snow, something I’ve always wanted to try. At this point I lost cell service and couldn’t spot, so I just hoped that RBN would pick me up and spot me. I got 1 QSO on CW 40m with KA7MDM in Vancouver, WA. With no other takers (I think there was a delay in RBN putting the spot on SOTA) I switched over to 20m. At this point my cell service came back and I was able to get a spot up. 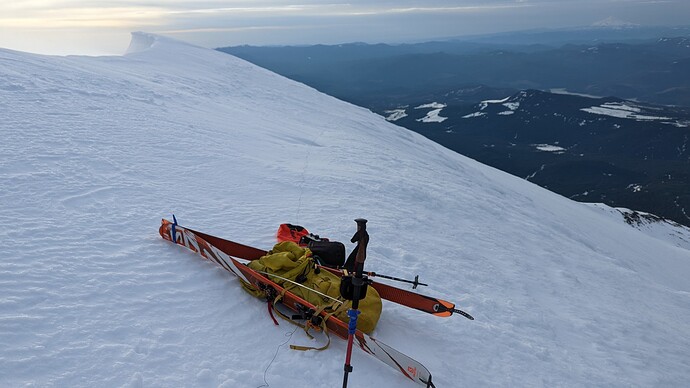 20 meters was good to me and I was able to get stations on the east coast, France, as well as many “locals” in the Seattle area. I worked 13 QSOs in 11 minutes, which I think is a cw record for me. With the pileup ended and cold fingers, I packed up. 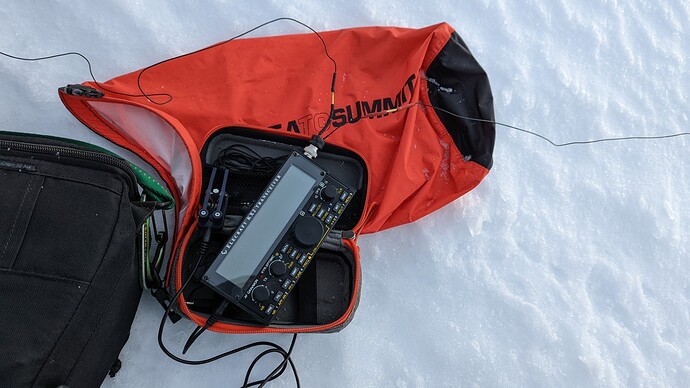 I am very glad I left my HT on because I took a couple steps and KJ7RTO, activating Mt Hood (W7O/CN-001) came on the air. We worked each other Volcano to Volcano and got mutual SOTA Completes for our mountains!

Before skiing, I traversed back over to the main south side. The skiing in the upper mountain was good, but hoooboy I am out of downhill shape. The ski descent took a long time just because I had to stop for many breaks. Lower on the mountain the snow was soft and slushy, typical conditions for spring. It took my legs a minute to remember how to ski in that stuff. 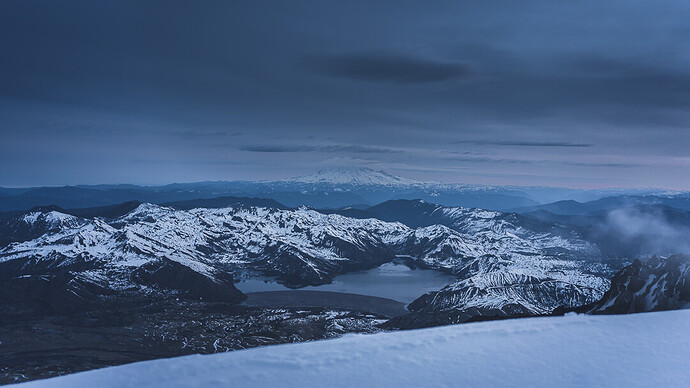 Wow, just Wow! Congrats on a memorable activation.
Be safe and radio on!

Tim,
Thanks for sharing your activation of Mount Saint Helens!
Great story and pictures. I’m glad I could work you and I’m amazed by the effort and determination it takes to activate these summits.
73 and stay safe!
Gary, K3TCU

Thanks for posting with pictures!

Nice report, photos and congrats on the worthy activation!

Great report! That really was an Alpine start. How close can you get to the caldera? I assume it’s corniced and smells pretty bad?

Hello Fraser -
It’s only 1000 feet (down!) to the caldera and a quarter-mile horizontally - not really a route to take plus the caldera is closed to any entry. To my understanding the primary vent product is steam, no sulfurous emissions.
Etienne-K7ATN 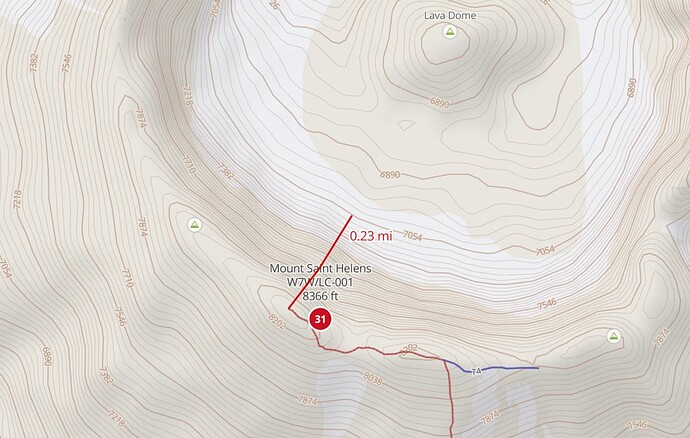 Well done and thanks for the write up. On my wish list but it may just be a dream. Brings back great memories of being in the area and camping as a kid.

This is one volcano that doesn’t smell too bad. Not sure if it’s because of the steam composition (as K7ATN pointed out) or if the wind typically blows it away from where climbers are.
Mt Hood, which has active fumaroles on the climbers route, is much stinkier.

it’s a beautiful place to be!

I somehow wasn’t getting updates on this thread. Thanks for the comments everyone.

Video of the activation here: https://youtu.be/fTHFRWAH5TQ

That’s a hell of a climb Tim! I’m honestly jealous that would have been so much fun maybe more so in summer but still haha. I’m still hoping to get a s2s with you one of these days .

In the summer it’s a pile of loose dirt. Two steps forward one step back.

Listened for you yesterday during your activation, but no RX

Still trying to get that QSO with you!

We will get it done one of these days for sure.