A suitable sized square of wire mesh would provide a directional attenuator to cut out some of the cells being received and lessen the qrm. A square of mesh say 30cm x 30cm could be cable-tied to your pole, stand to the left to get the cells to the left, etc. It’s just a uhf radio, after all.

If I work an activator who does not appear to have a spot yet, I offer to post a spot, together with QSY plans if any eg. “Going to 20m at 02:15”. Mostly these offers are accepted.

It should hold off RBNhole spotting them again if you are quick (if I remember how it works correctly.)

Going to give GW/SW-041 a shot tomorrow on HF SSB starting on 20m. I’ve put up an alert but time is very approximate. I’ll see if I can update it before getting to the plateau.

So thanks to John @M0WIV for his write-up, I successfully managed my first ever SOTA activation today

My wife Sue and I decided to follow the same route up with the simplest climb and this was really a big challenge as Sue is registered blind with very little sight left. So we arrived at the Gospel Pass car park at around 9:30 - there were only 4 cars here then. We made it up the steeper first bit OK and pressed on along the ridge to Hay Bluff trig point, settling into a routine with me describing the path to Sue and her guide dog Tara helping round any obsticles. Once we had made it to the trig point I was quite confident we would be OK so set off to join the Offa’s Dyke path and up to the plateau.

We decided to stop just before the top, after the “steps” (Sota Goat app was showing us 5m below the summit, which is good enough even allowing for GPS inaccuracy). Sue with guide dog Tara at the activation point: 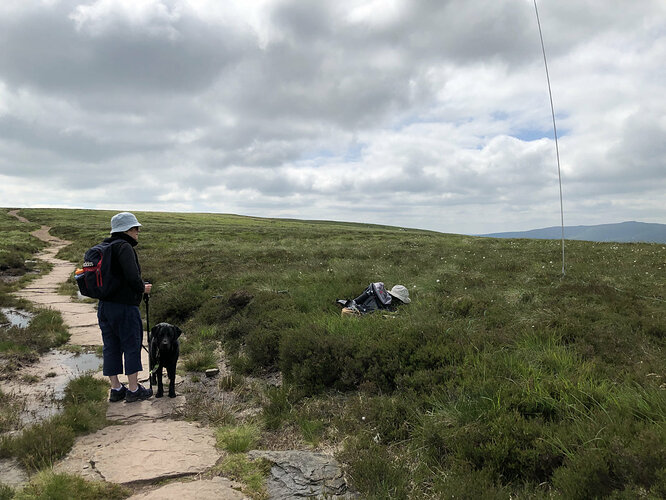 I setup the Chameleon MPAS Lite vertical just off the path, using 6x 4m radials instead of the single counterpoise that it comes with. This was tuned with a T1 tuner and the IC-705 was running on internal battery at 5w. I need to get a larger day pack, so for now had to carry the radio outside my pack and found that it just fitted nicely into one of my camera bags, a Billingham Hadley Small along with the T1 and mic: 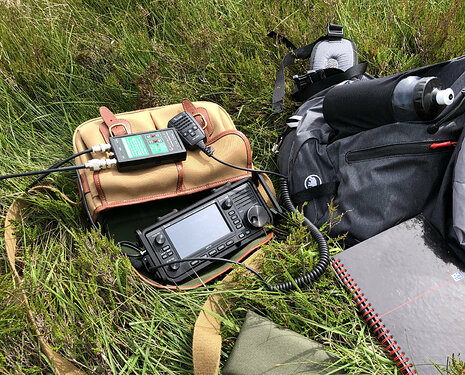 Switching the radio on I immediatley heard James @M0GQC operating from GW/SW-001 so I was able to start my first activation with a s2s call (I may have sounded a bit enthusiastic at this point!) and James was also kind enough to post a spot for me as I hadn’t been able to get a phone signal when I first arrived. However once i had sat down, I did get enough 4G to be able to self spot from that point on.

I worked 15 stations on 20m SSB including another s2s John @G4TQE on GW/MW-013 and MM5DWW from Orkney. I couldn’t keep Sue waiting too long, so switched for a few minutes to 17m and worked another 6 including my best DX of OH3GZ with excellent signals both ways. Just in case there was any SpEs around I quickly checked 6m - loads of loud FT8 so I spotted and worked Rod @M0JLA in Hereford, but nothing else. A final quick go on 40, where I know my antenna isn’t great, but worked EA2CE to bring the total up to 23 - very pleased for a first attempt. Sorry to anyone I couldn’t copy, it got a bit busy on 20m at times and I’m sure there was a 4Z4 station who I heard calling but the QSB got the better of us.

We then packed up and made our way back to the campervan, just taking our time on a lovely day to be out in the hills, Can’t wait for the next one!

You’re right, you did sound like you were getting quite excited…nothing wrong with that, it’s all part of the fun!

Sounds like you had a great day out. Hope to catch you again on another summit.

Hello Jonathan and Sue. Congratulations to you both for this activation. A great effort and a fine report with photos. I hope you both enjoyed the activity.

Well done Jonathan and Sue. You made the right choice choosing HF. I’m sure the summit can be qualified on 2m FM - and probably has been many times - but by people who posted an alert and had more time!

I’ll be back in the area in September and hopefully will be able to have a look at one or two other summits.

Thanks John for your write up which gave us confidence for Sue to try it, it was a lovely day out. Interestingly I found that getting the mobile close to the ground reduced the 4G signal strength and allowed me to spot, backing up the suggestions from everyone about too many cell sites being received

hope you have fun on your next visit.

Thanks James and Geoff, yes enjoyed it very much. I’ve also now got a better idea of what I need to do to prepare better for next time and back to CW practise - next target will be to start chasing with CW in the next few weeks (at the moment my paddle use varies from a nice flow state to no control over my fingers and complete jibberish, but it’s slowly improving

Feel free to activate this summit with either the M or the MW prefix, dependent only on which side of the border you set up on.

If activating on 2m, resist the temptation to press on all the way along the broad ridge to the true summit. Activate from the position reached as soon as you’ve ascended the steps after Hay Bluff. You’re easily in the AZ there, but have the best VHF take-off towards major population centres. A really good one in fact, in contrast to the actual summit from which the take-off is relatively poor.

You’d probably have more success connecting to your mobile network from there too. If not, you could try dropping back down the nearby steps to reduce the number of signals your phone is receiving.

Congratulations! Sounds like you had an excellent day out.

Thanks for the lovely write-up and congratulations on your first activation.

Here’s to many more!

John. Thanks for the post. Lovely country and so green. Good attitude, and I agree with you: one of the fine things about SOTA is getting into the hills.

Thanks Fraser for your kind words, I’ve passed them on to Sue.