Another Winter, another Winter Sun holiday. Last year Lanzarote this year Fuerteventura, the next island in the chain. You may want to place a bet on if we’ll be in Gran Canaria next year!

After the last update, 36 new summits were added to Fuerteventura. This island doesn’t seem as popular as the others, it is much bigger than Lanzarote with only 2/3rd the population. The ground is similar but you can tell the difference between the 2 islands when you are actually there. 36 unactivated summits… which to do. There’s scant info on walking in Fuerteventura, you really have to work at Google to find stuff, lots is not in English on personal blogs. Anyway, Google maps is your friend along with Rob’s SOTA mapping site. Look up the summits there, look at the Google map, OpenStreetMap cycle map and the aerial view. On some summits you can see faint tracks. Some are a bit serious, some do have paths marked. But mostly you’ll need to view the aerial view etc. and use your ability reading a map to determine what you can do. Don’t forget it’s dry, hot and sunny nearly all the time. Water, more water, sunscreen and due to the unlikelyness of meeting people, make sure someone knows where you are going.

We stayed in Corralejo in a lovely villa with a pool… nice. Again this was a family holiday that just happened to involve some SOTA not a SOTA expedition. If it was the latter I’d have been aiming for 3 summits a day not just one day of activations. But what a day as it just so happened the EU<>NA S2S event was on and for once, I was in a good place for both EU and NA chasers and to add spice to the mix, I was in Africa and hence real SOTA DX.

Previously unactivated. This looked much bigger and severe when we drove past it on our arrival, but driving past it a few more times before attempting it brought it into context. Not too hard really, the most testing part would be the terrain. A cross between fine volcanic ash/rock with small eggs sized lumps of lava to much bigger pieces. Plus, of course, the actual caldera rocks themselves. Last year I had a pair of Karrimor Mount Mid boots. These are a glorified trainer, waterproof (mine seem to be) and very comfy. But the sole is made of butter, 3 EA8/LA summits and 2x F/PE summits removed most of the tread from them. I still wear them for walking the dog but they are not suitable for volcanic stuff as they are too soft and don’t provide enough insulation between your foot at the ground. This year I invested (ha!) in a pair of Karrimor KSB200 boots. These have a sigificantly thicker tread and are much more a real boot than the Mounts. Again, these are sacrifce boots… cheap enough not to care if a holiday ruins them. Tested in OK & SP the month before, they are comfy and do offer much better isolation and cushioning. They have survived a good thrashing with hardly any wear. They should do a few holiday SOTA expeditions which is good to know.

I parked on the FV-1 at the foot of the mountain. This road runs along the coast through the Parque Natural Corralejo which is a huge expanse of sand dunes. Some of the best beaches are here to. There’s loads of places to park, I used Google streetview to drive this road to locate parking places. Works for me. I had no trouble parking but I was at the far end of the beaches where it’s rocky. Check that I had all the gear with me, check for water with me, water in the car, apply more sunscreen, apply hat, check I had “The Hat” and we’re off.

Ok, this is the view from the car. Doesn’t look too hard. I knew there was a rough track from the aerial view that went up to the obvious caldera rim. It was just a bit of a yomp over unknown ground to the rim. 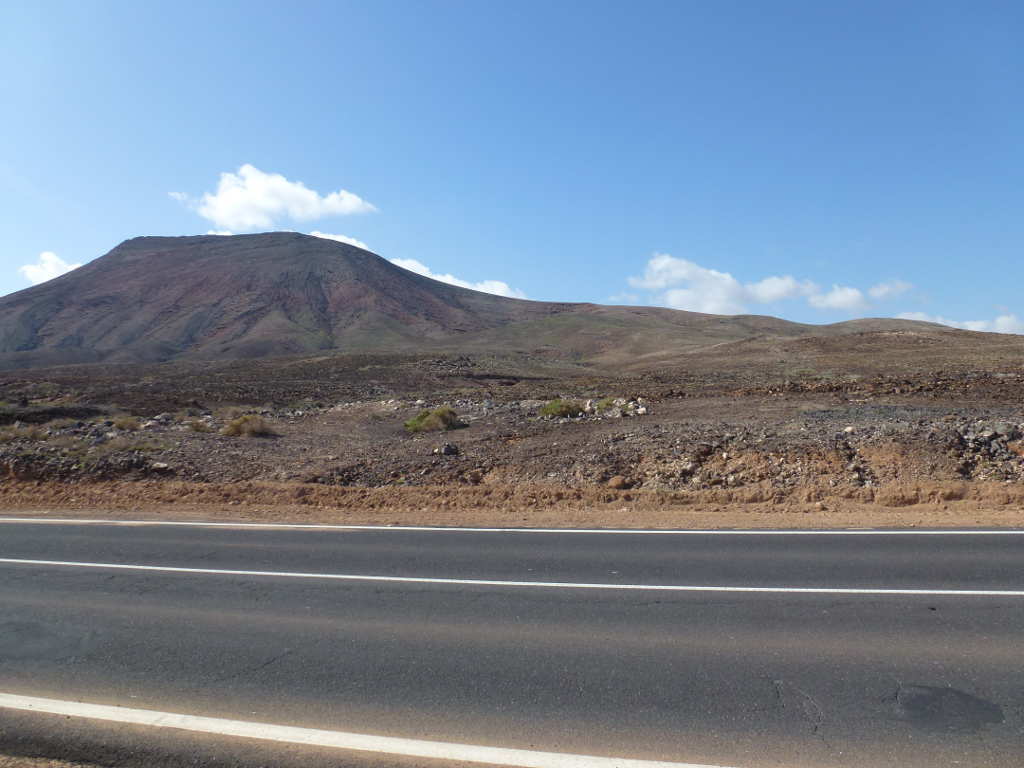 It was quite easy TBH. It was about 26C but quite windy so I didn’t feel hot. The ground was quite soft and I felt a little guilty leaving a trail of footprints. Maybe no human foot had ever walked here. Then I came across one of the construction tracks from when something was built. I had seen it on the aerial view but couldn’t tell until I was there. It was a water pipe on pillars. 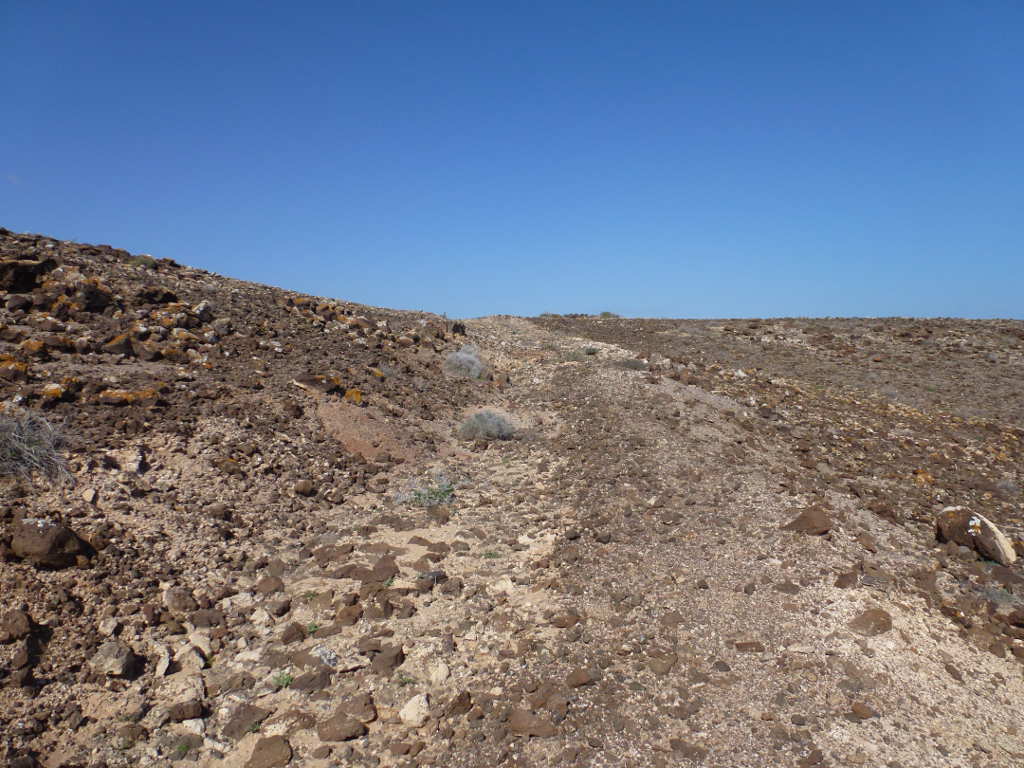 A view up a dry river bed showing the pipeline higher up. 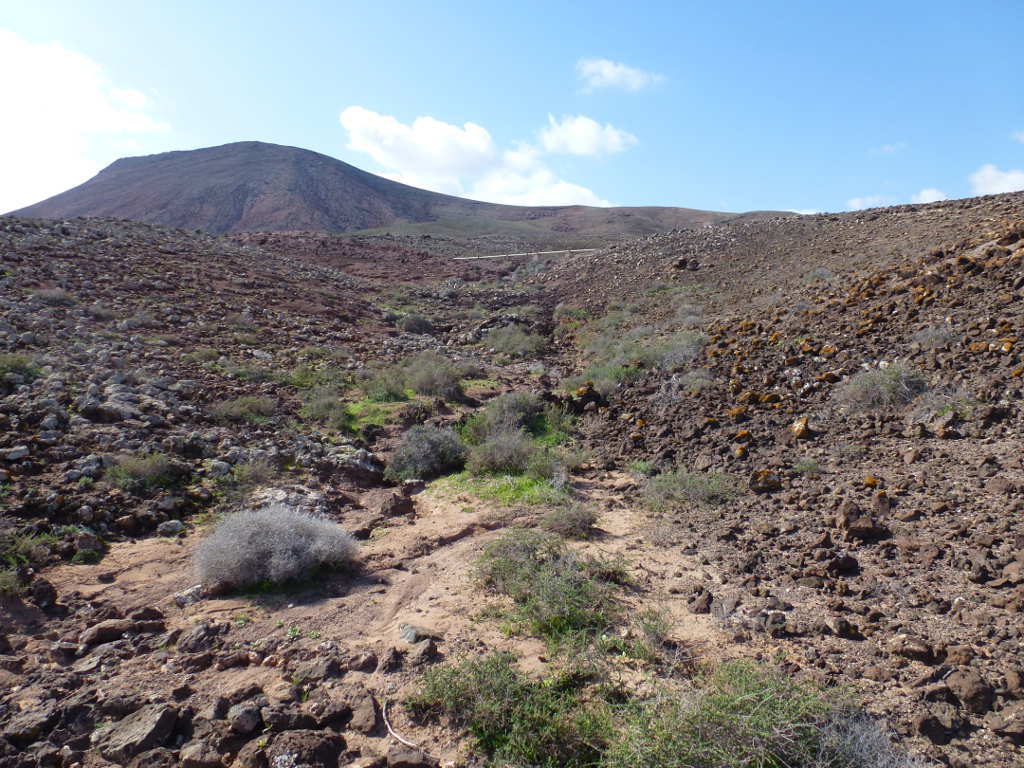 It didn’t take much effort and I found the track I could see on Google. I wasn’t sure if it was a path in a dry stream bed or a dry stream bed that formed in a path. But there was something to follow and it went exactly where I thought it would go. So it wasn’t too long till I was at the caldera rim and then the views got a bit better. 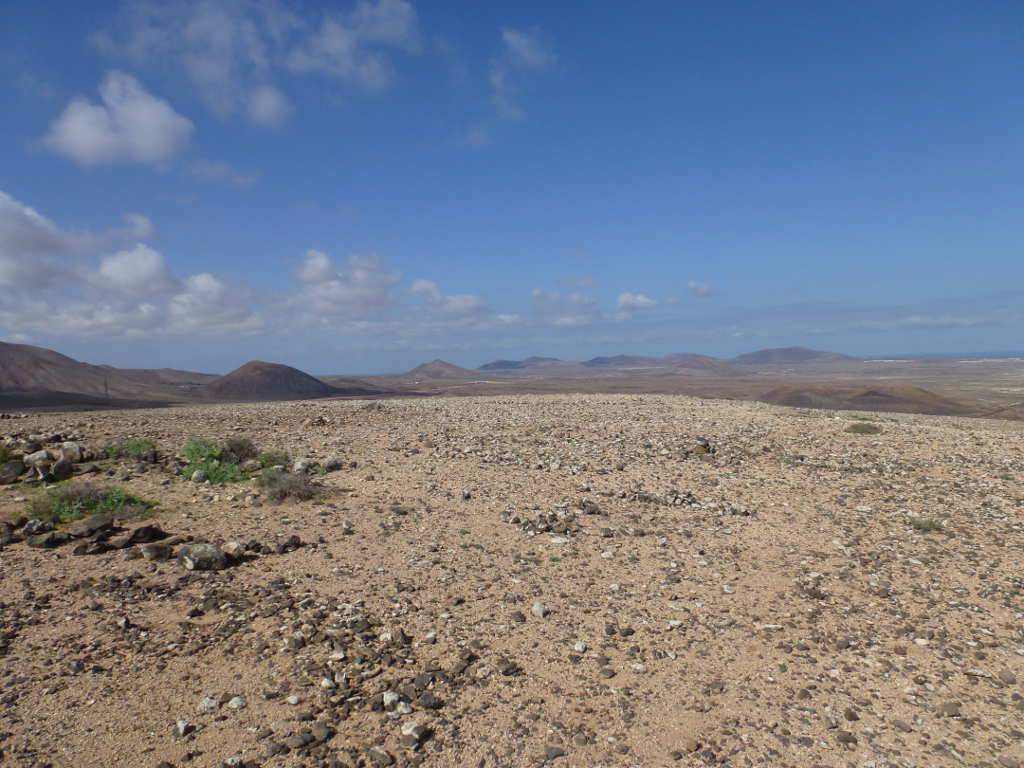 Now I’ve done this before, get to an important point on the route and go charging off without knowing the point to change direction on the return. I’ll mark this on my phone GPS route. Ha! Better turn tracking on then as I forgot at the car. Anyway, hard to miss where the track from the caldera starts, someone had built a small cairn. Easy.

Looking up the more obvious track along the caldera. It doesn’t look too sunny. Don’t let those clouds fool you. The sun goes behind and it’s still hot! 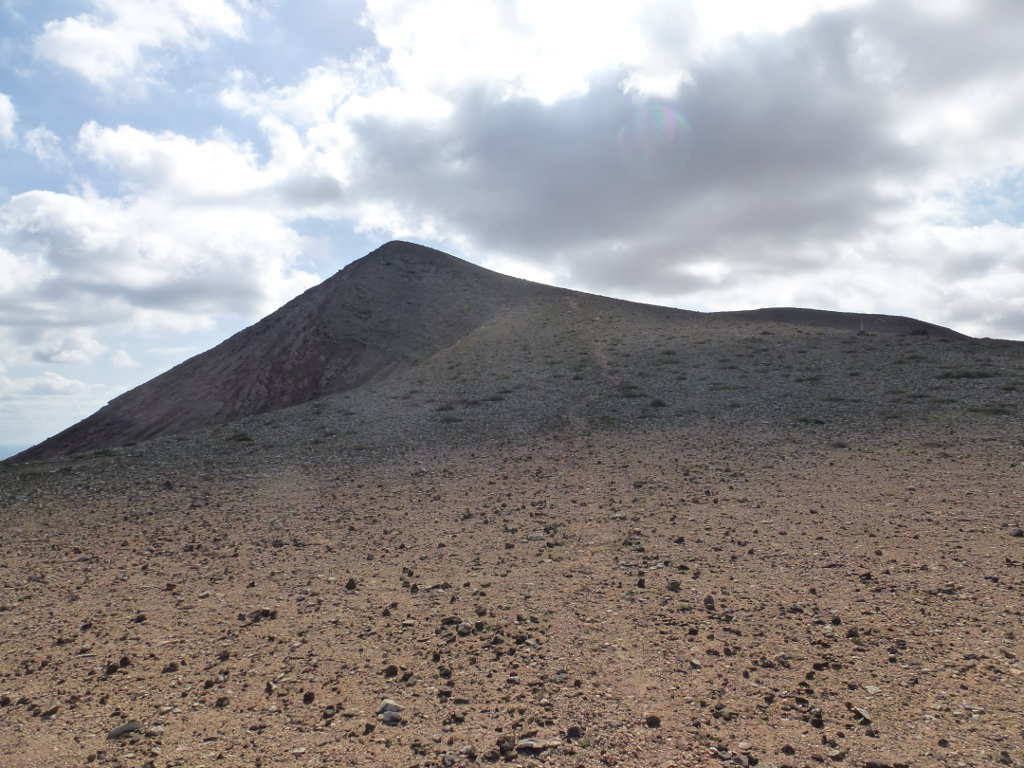 From here it was follow the track to the trig point. The surface was quite slippy with tiny pieces of lava that were like marbles. Once you start to slide it was difficult to stop. I did have a single lightweight walking pole with me and TBH it was very useful. What is surprising is how quickly the caldera rim wall narrows. Damn fine drops either side and I don’t do exposure! There was an obvious path along the rim. Now the small marbles were slippy, but Gordon Bennett do you get some adhesion between a boot surface and the big lumps of lava. That’s why it kills boots but you could stand with your feet at all sorts of angles and it was like you were cemented in place.

This is at the top of the path where the rim suddenly narrows (taken on the descent). I’m still wearing my special ATN SOTA cap. Too nice to wear all the time and get grubby. This gets taken on all SOTA expeditions and is worn just for photos. 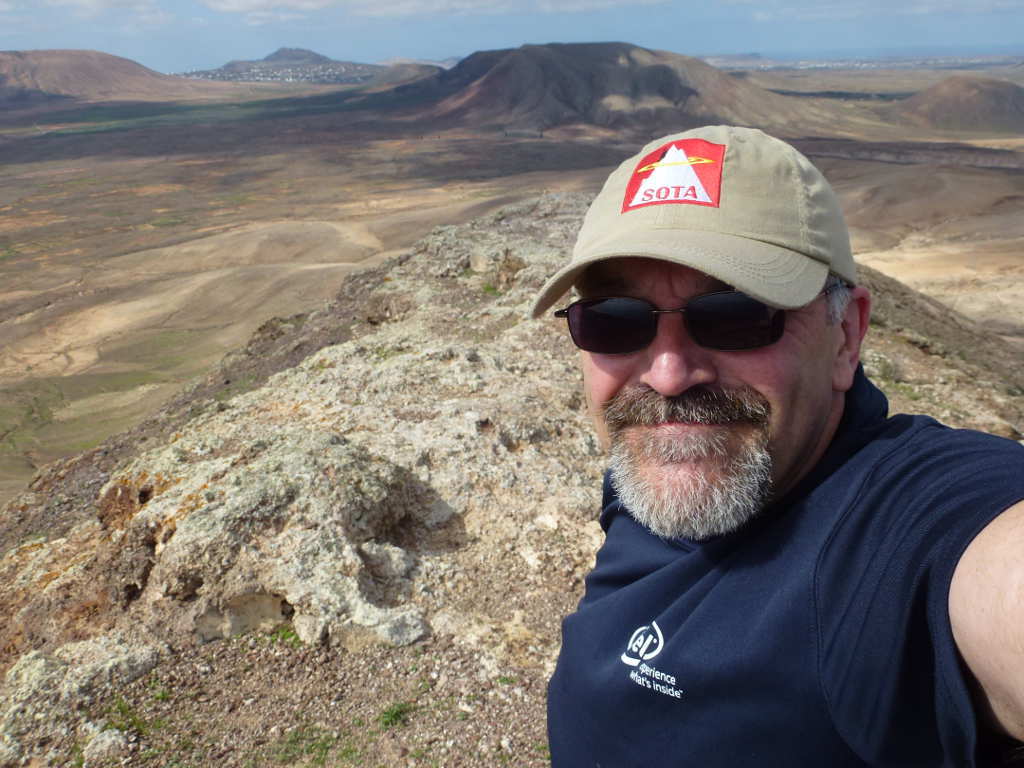 It took about 5minutes to get from here to the trig point. Setup consisted of lashing the pole to the trig and finding a crack/notch in the rock to support the wee tent pole that supports the elevated radio. Ha, you wont get tent pegs in this stuff. It was narrow enough that I was careful moving about… didn’t want to fall all the way down to nearly sea level again! From my time in Madeira and Lanzarote I knew that my antenna tunes differently on lava rather than wet peat and it was no problem to get going. I worked only 20m and 17m CW working 15 stations on 20m and 3 on 17m. ODX was EU2MM. I had one 4000mAhr LiPo and my custom USB power bank. This was originally a normal USB power bank for charging a phone but a quick rewire job turned it from 3x 2800mahr cells in parallel to series. I used this to power the 817. I had 20W PA with me for the next summit but no chance to recharge so I kept the bigger cell for the next summit and the PA.

It was hard to keep my mind on the job in hand as the view was a bit good.

Looking NE towards Corralejo and Lajares… this is not Scotland! 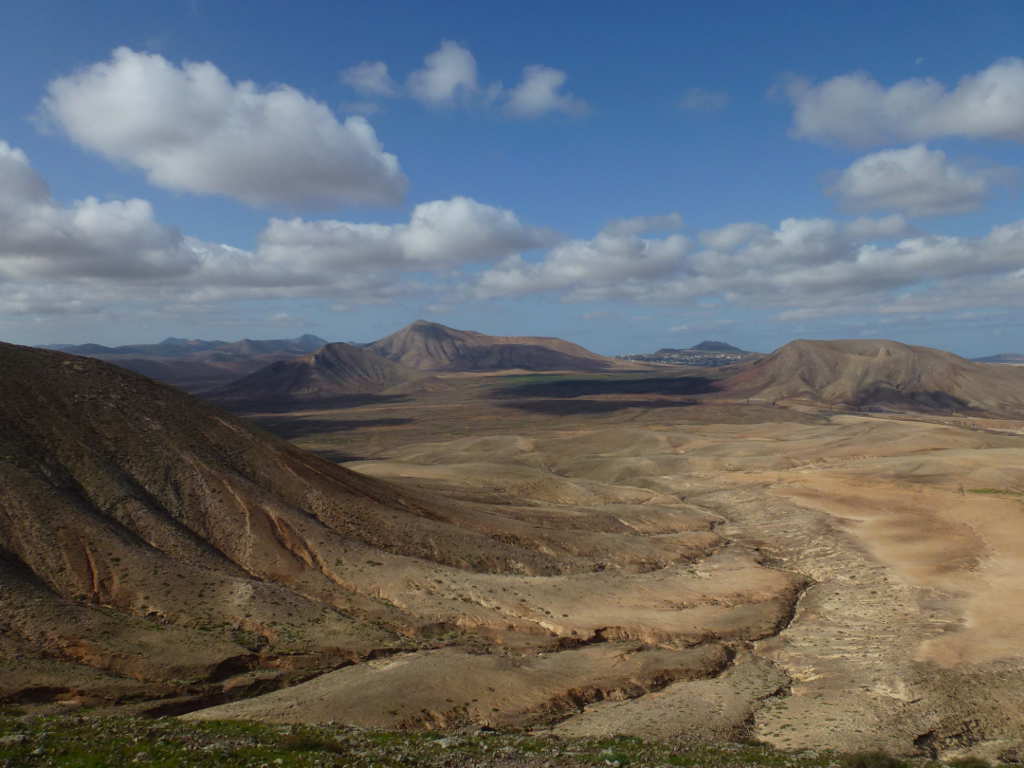 This time looking NW across the massive sand dunes and beaches in the Parque Natural Corralejo. The small island is Islas de Lobos, which we had visited earlier. Both the island and dunes are WFF areas. Hmm, operating with a vertical from the beach here would be a great way to get a nice pileup going. Behind you can see Lanzarote and EA8/LA-002 is the biggest hill. Playa Blanca and Roja EA8/LA-026 to the left side of Lanzarote. 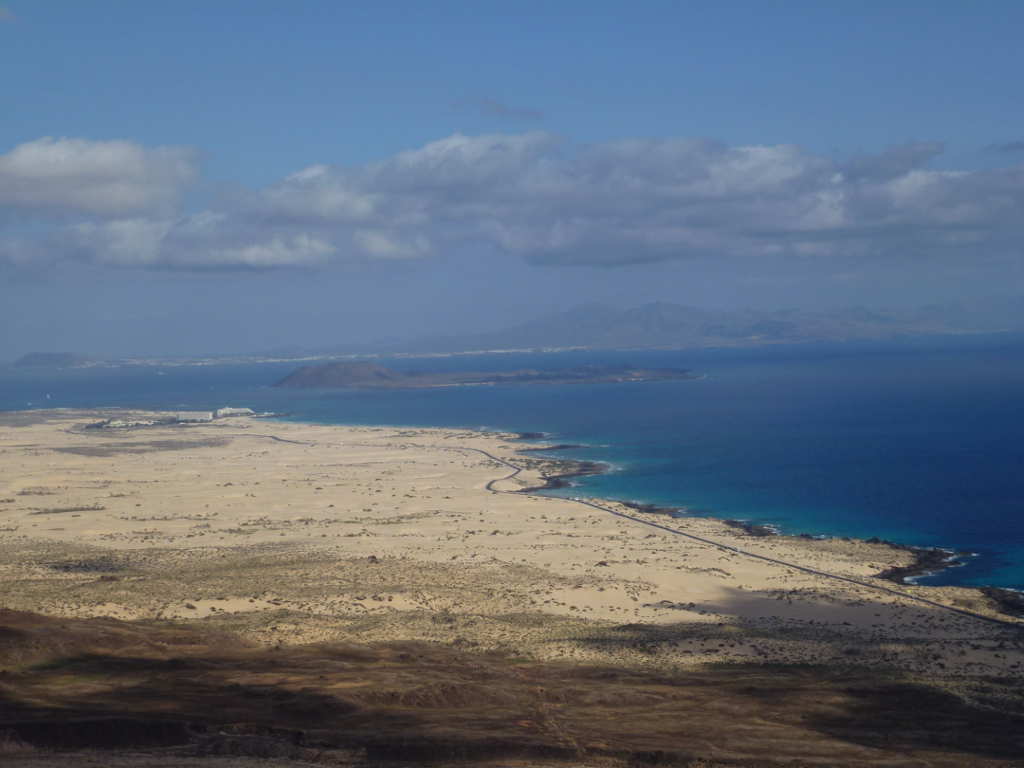 As soon as a few CQs went unanswered I call it a day. A big drink of water, station packed away and I made my way back to the hire car ready for the next summit which would be on the air during the EU<>NA event. But for the 1st activity of the day this was a blast. I reckon it took about 1hr from the car. I didn’t push myself because of the heat. About 40mins back as I needed to unload the water and take photos!

such an amazing island! I spent time there 4-5 years ago. loved it!
Villages in the middle of the mountains had the best tapas and alcohol!

Is this the one that from one angle looks like elephants around the side? Done a couple of holidays in Corralejo but all before EA8 SOTA. Isla de Lobos is lovely - did you do the walk to the top of the mountain on there? Bit exposed on the last bit and not quite high enough for SOTA sadly, but the little rustic fish restaurant on the island was good.

I’m not sure Tom, but it’s the “big one” you pass just before the endless dunes. We did walk to the top of the volcano on Isla de Lobos. That was great and it’s a real shame it’s only 122m or such. I fed some of my apple to a lizard on the top, it kept it still enough to photograph. 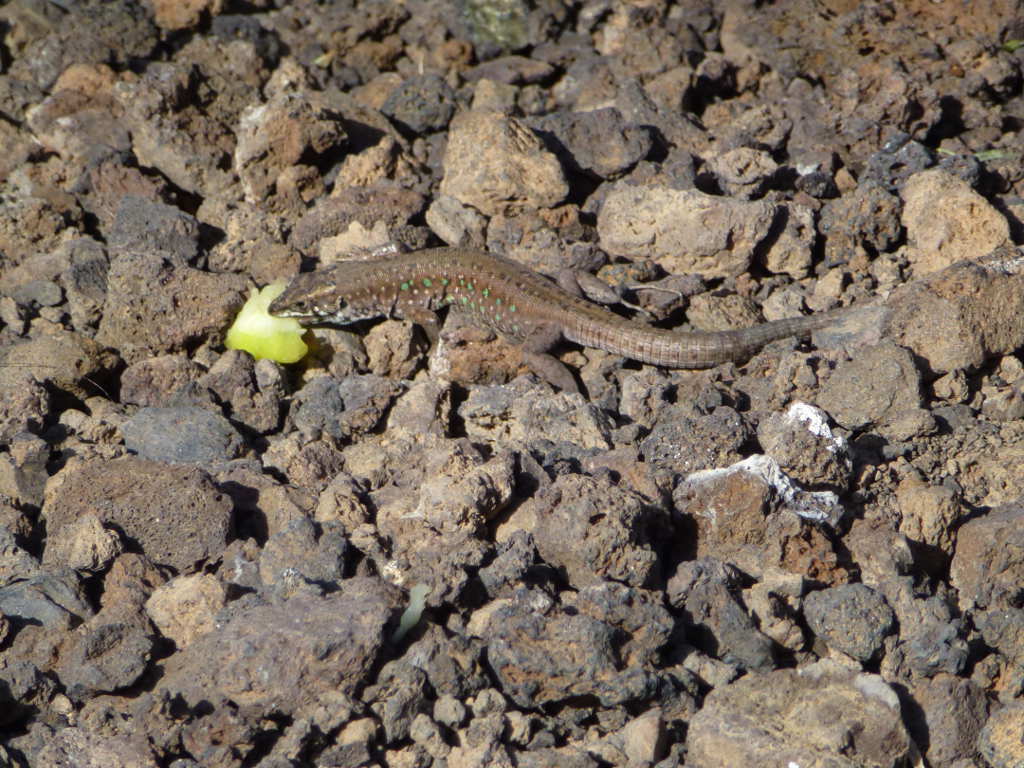 We only had ice cream at the fish restaurant but the crowds eating and drinking suggested it was a good place. With the sun on the white walls, the colours of the painted wood stood out wonderfully. It must be packed with customers all year round. Looked to be a much better way of life than writing software, cooking fresh fish for happy people!

Yes, Tasos, it’s a lovely place. The remote cafes have a feel to them I’ve not noticed anywhere else. We had a great hour sat in one “Bohemian” cafe on the West coast drinking coffee (I was driving) and watching the Atlantic breakers crash on the shore whilst sheltering from the sun. It was another day with lots of high altitude cloud but at 28N, the sun has a real bite compared to here at 56N!