MG activation - S2S from every direction - GW get together

So, we had planned a S2S morning in GW land followed by a BBQ and get together in the afternoon. Today was also my MG activation which I’d been looking forward to for some time

I decided to ask Allan @GW4VPX to join me on this special occasion as he has joined me on a few summits before. We were nicknamed ‘The Dynamic Duo’ by @MW0OFA Frank, hi! 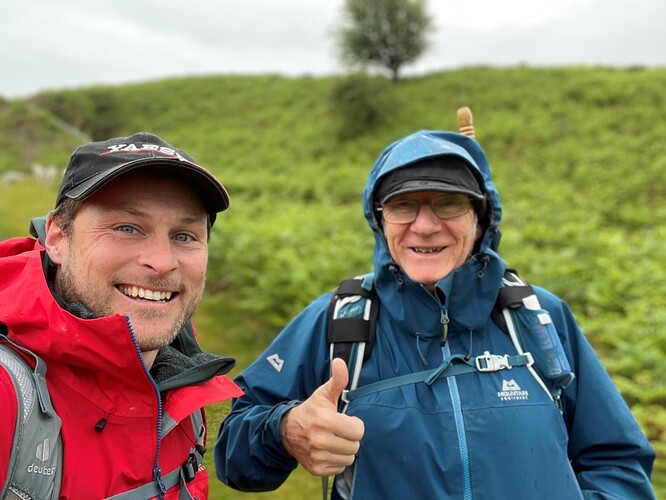 ‘Y Golfa’ GW/NW-061 is a very easy walk and situated bang in the middle of a golf course (FOUR) . This would be one of my local summits only being 4 miles down the road.

I met Allan in the car park and we made our way across the course towards the trig: 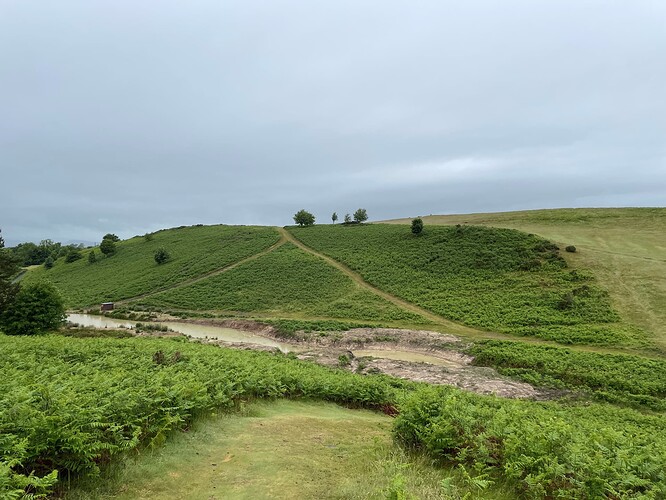 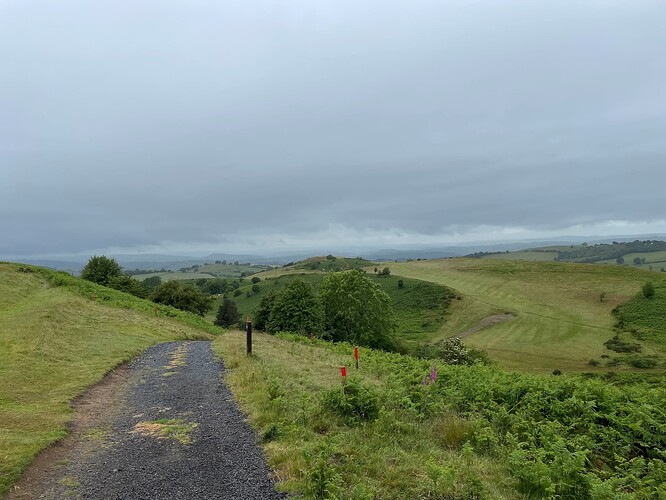 We had started off rather early, so there was no rush. We took in the 360 degree views as I pointed out all the surrounding SOTA summits to Allan. We always manage to find a lot to talk about! The walk is approximately 3/4 of a mile, one steep ascent and the rest is pretty flat. It didn’t take us long to reach the final pull below the trig stone: 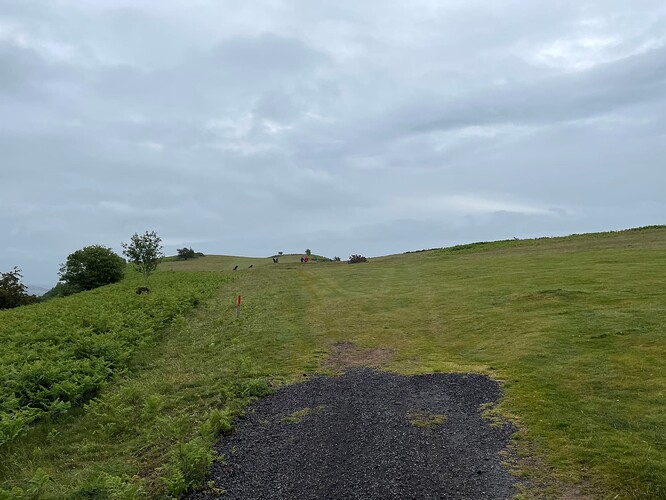 Being as this was my MG activation, I had carried the kitchen sink with me to the top! Allan was laughing as I kept pulling all sorts of equipment out of my bag. It was like a magician pulling rabbits out of his hat

We reached the trig and took about 10 minutes until we were all set up for practically every band under and over the sun. The 7m pole was standing strong with antenna’s hanging off. We began by working 2m FM and sharing the mic. The aim to start off with was to both qualify! I made the third contact and passed over the mic to Allan: 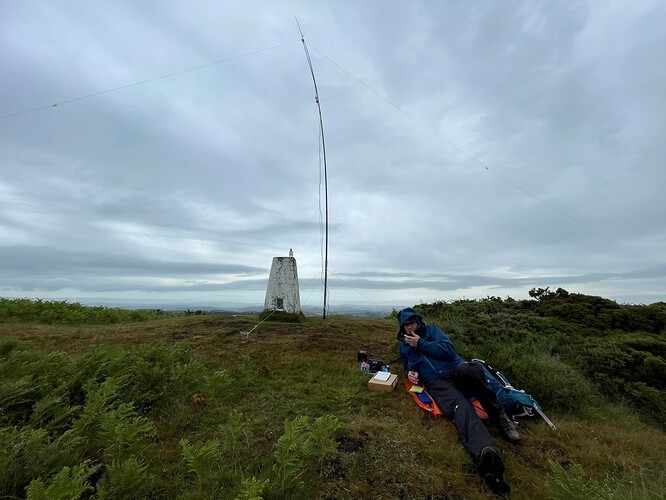 He returned the microphone where I put a CQ SOTA call out for the fourth contact. Fingers were crossed and teeth were grit! The mic was de-keyed and @2e0dij Duane came in to qualify the summit for us

I now had 1000 points - woohooo! There was smiles on both our faces and Allan had kindly brought a card with him and also presented me with a Mountain Goat cloth badge - thank you very much Allan! 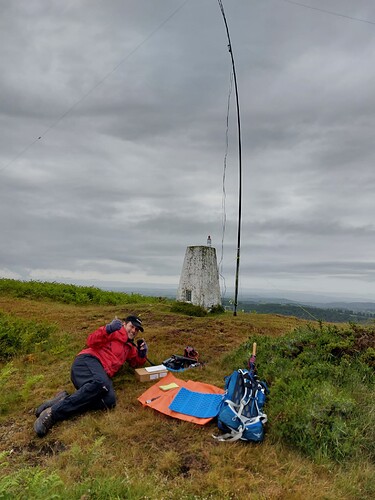 It was now time to chill and enjoy working everyone on as many bands as possible! There was a fantastic turn out for the GW SOTA S2S party, so I managed 15 S2S contacts in a very short space. I won’t name them all, but thank you ever so much for the great support and livening the Welsh mountains up on this wet morning! No bad wx stops us Welsh folk! 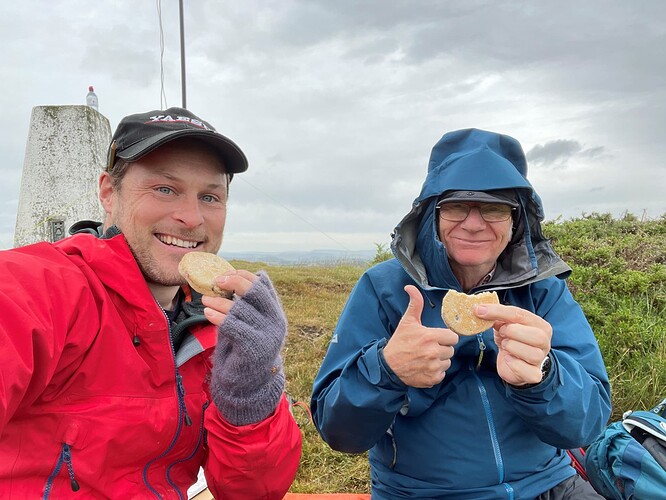 I’d like to thank Allan for his great company as per normal and also for the prezzie - I’ll be sewing the badge on my Yaesu cap very soon!

We both made for our descent, chucked our gear in both cars and made our way to the GW SOTA get together - people to meet and burgers to eat! 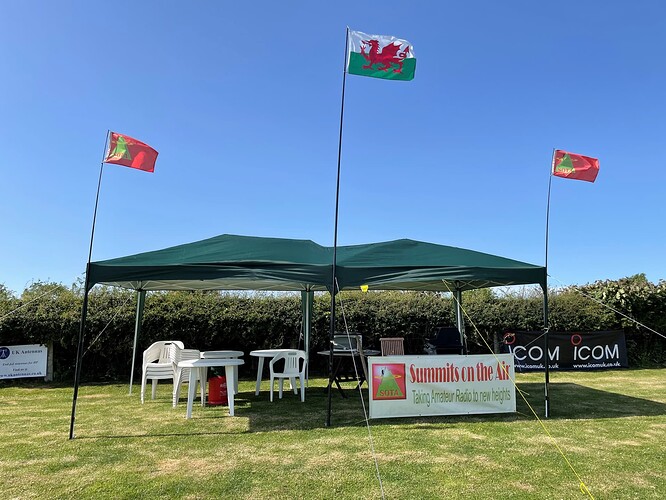 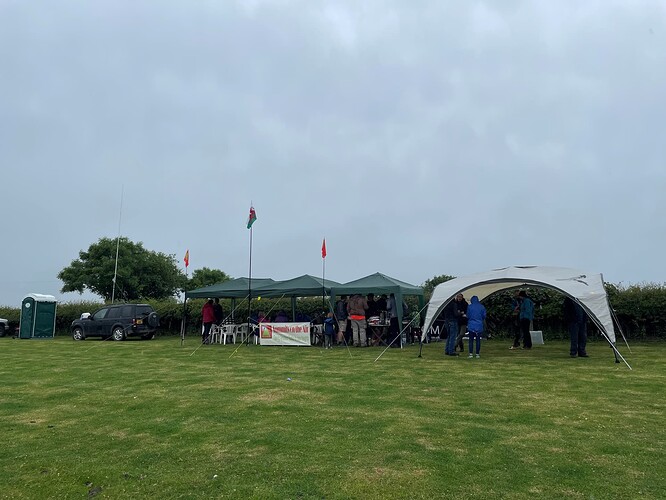 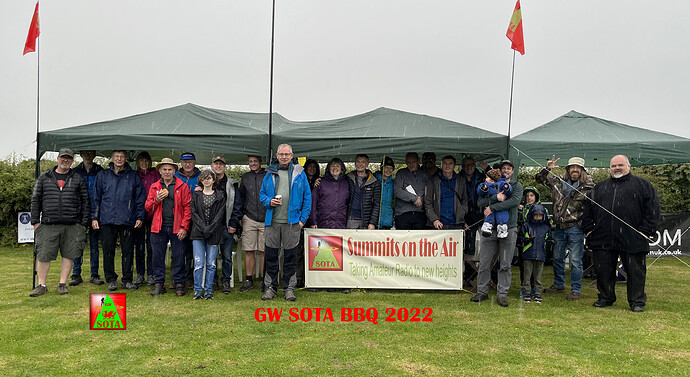 This was a fantastic get together where I met all the great people I speak to on various mountains around Wales. We all had a nice time, despite the wx being poor, and also raised a considerable amount of money for the running of SOTA

This will be sent over in the next couple of days!

I’d personally like to take this opportunity to thank all the chasers out there for your tremendous support! I wouldn’t have been able to do my adventure if it wasn’t for you

I’d also like to thank all the activators for the S2S made and also to the SOTA MT for running such a great hobby!

Hope to catch you all soon! It won’t be long until I’m back out!

Great report and photos Ben (I’ve got to say that

) and thank you for organising such a fantastic day. Really glad you chose Y Golfa as I wouldn’t have been able to keep up with your pace on anything else

It was great to meet up with so many chasers and activators at the gathering…hope we can have another one next year🤔.

Thank you for sharing your MG day with so many people. What a great day.
@G6WBS Shane insisted on a LSOTA activation (luxury SOTA) for your MG S2S, with 2 shelters, Welsh cakes and a flask of tea! 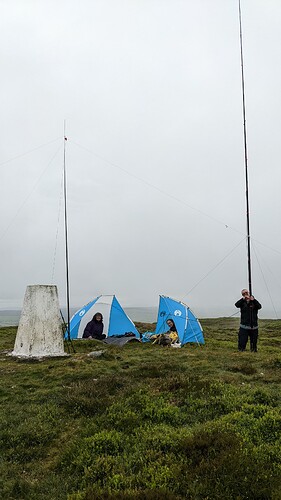 Thanks for organising everything (except the weather !) Driving North the rain was heavy and continuous so you were lucky to be out of it for your activation. Sorry we missed an S2S but I had left my phone in the car so was unable to spot, and I think you had QSY’d to HF by then.

Meeting you all for the first time I have to say what a super bunch of people you turned out to be. A great afternoon was had by all, with great banter, as many tales of past activations were shared and route and gear tips were swapped.

Many many congratulations on your MG activation Ben! Looks like you had a perfect day of radio and socialising! Big

for all that you do to promote SOTA, and look forward to working you again soon,

Welocome to the herd, Ben!

Ben, Thanks to you and the others for organising the event and in particular the gathering. Also thanks to those providing the food and specifically the cakes. Meeting everyone and having a natter was really good and listening to a bit of Cymraeg thrown in as well. Although next time I’ll activate a nearer summit so I’m not the late there.

Thank you very much @M1BUU Colin!

Thanks @GW4VPX Allan, it was a brilliant day - couldn’t of asked for any better! Again, thank you for the company and gift, we had a great activation on Y Golfa. Next time we visit, it’ll be a round of golf?? hi!

Deffo have to have another event next year, should be an annual event!

Thank you very much @MW0KXN Kevin! It was great to meet up again! I’m loving the LSOTA images (tents

). Welsh cakes and tea and becoming a regular on summits now!

Look forward to our next adventure!

Hi Rick, your very welcome, it was great to meet both you and Cathy! I hope you enjoyed yourselves. As for the wx, well, when doesn’t it rain in Wales, hi!

Never mind about the S2S, we do have our fair share of qso’s when out on the hills or chasing each other

There was deffo some good banter had and many stories shared.

Hi @M0JSB Matthew, thank you very much for the kind words! It’s been a fair journey, but succeeded at last. Spoken to many great amateurs over the past 10 months and thoroughly enjoyed myself!

Cheers Pom - look forward to my next trip over the water

deffo have to taste asparagus then!!

Your very welcome @G0WPO Neil, it was great to meet you! Thank you very much for calling by! It’ll deffo be an annual event now, so you can stay over next year

look forward to our next qso!