I was inspired when working Andy (G8CPZ) on Mellbreak to try a new hill in the Lakes. I’ve been walking for years - only coming to SOTA in the last five years, so there are a lot of hills that I have climbed in pre-radio days that I’m repeating - but Mellbreak is new so a proper unique for me…

I have looked at the carefully laid out kit that some activators take and I’m a bit less organised. I generally put too much in, pick up the rucksack, utter a dark oath and throw something out. Yesterdays bonus item following this approach was still too much water ( 1l plus a coffee - there were plenty of streams form Woody to drink from) , but possibly leaving the shelter behind was a mistake as the sunny intervals in the forecast were actually light drizzle.

I carefully read Tom M1EYP’s report ( I’m getting a liking for soup after an activation … after reading many reports it has had a subconscious effect - Q - have we considered sponsorship from Crosse and Blackwell ( they make soup…) )and made my way to the suggested parking spot - already checked out on Google Street View. Bah Humbug - someone has blocked it with tree trunks so unless anyone knows better forget parking in Loweswater Village - you might get parked by what was the phone box and now is a defib otherwise it is the car park up the road…or stay in the pub

The WX was cloudy with a cloud height below the summit, but it was still a nice walk, well more of a tow from Woody and despite the delays in the journey (Accident on the A66) (Reversing back from the non parking spot) I actually managed to get to the summit at the alerted time. Antenna this time was a 40 EFHW and 2m Jpole but no contacts on 2m today. Woody didn’t join in any QSO’s for the first 20 mins, but obviously got frustrated so apologies for the later QSO’s as I was struggling with local QRM and I’m not sure how a 49:1 transformers efficiency is affected by a large dog sitting on it…( I did move him on). So 1 more complete, 3 S2S contacts and 5 activation points - not bad for a Friday, oh and a spare tent peg so I’m not sure if Andy G8CPZ left one behind last week?

Once again thanks to all the chasers, and thanks to Andy for the inspiration for the walk.
73 Paul 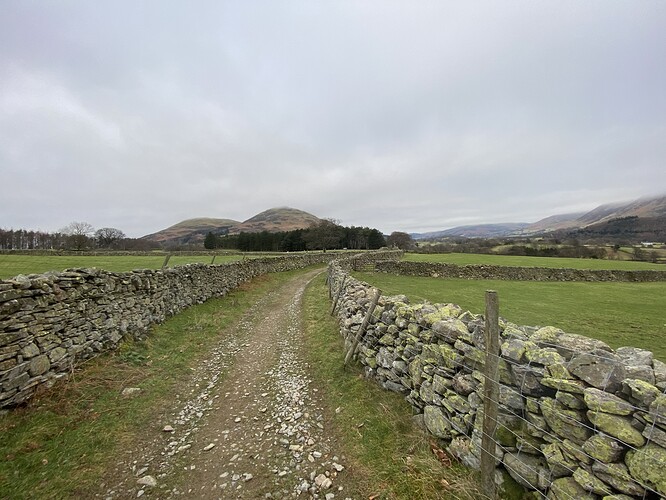 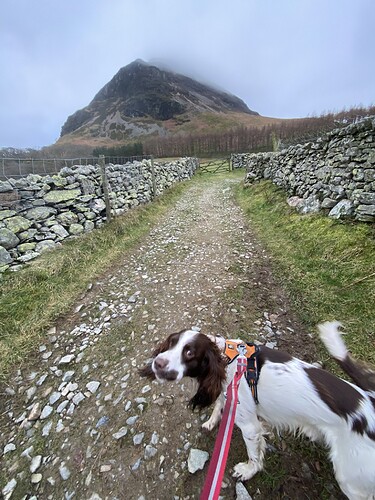 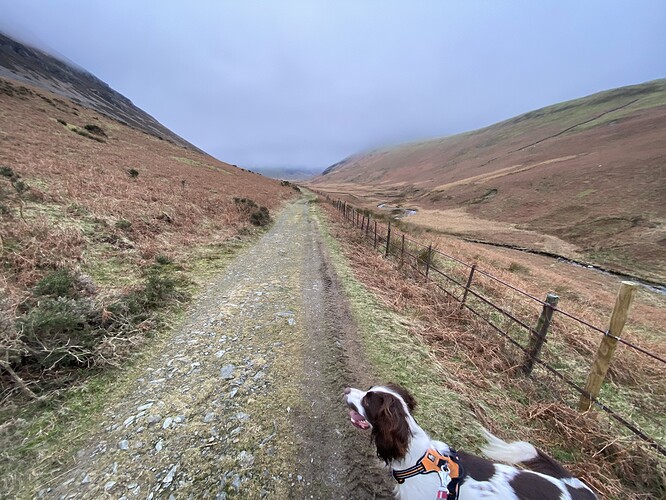 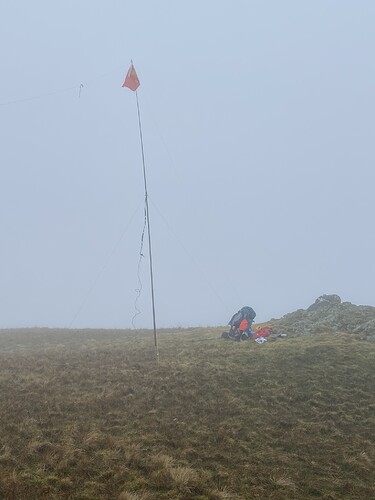 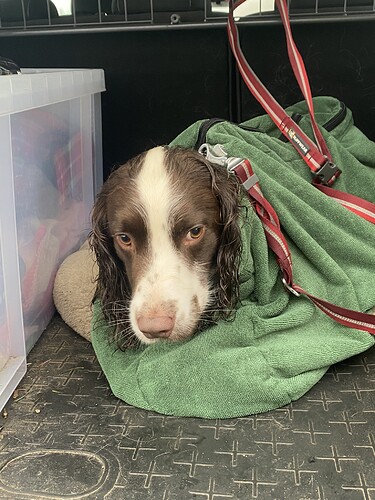 Finally Woody’s Dog Bag - It is like a dressing gown bag for dogs - and the mud stays on the inside. The only problem we have is getting him back out!

( And finally - finally after only having a licence for 42 years I have caught the DXCC bug so have been slightly distracted from SOTA for a few weeks, but as I’ve now got 105 confirmed countries normal service will be resumed )

Thanks for the report Paul, your dog is somewhat legendary now given his presence at the 2021 LD Autumn get together. He certainly knows how to get attention!

I’ve not done Mellbreck but it is one of those summits that begs to be done when the winter bonus is in force. Woody and the Summit photo is hilarious!

Sorry I didn’t catch you, no chance on 2m from that location and I have yet to get my first HF chase from home in the log.

Great report and photos Paul, thanks.

Well done Paul. Sorry I couldn’t try and chase you, but glad you (both) enjoyed the day. I had the same difficulty as you when I first tried to activate the hill - hence my decision to stay at the pub! A win/win

Nice report Paul. Cute dog photos always get me. Not sure if it was really me who inspired you, but in any case it appears to have worked. Or maybe inspiration was from Andy G6PJZ (with his very similar callsign).

EDIT UPDATE: Checking Andy G6PJZ’s SOTA log for Melbreak on 10/1/22 I think it was he who worked [and inspired] you Paul.

Apologies for mixing up callsigns, … I suppose they both finish in a Z and both of you are Andy, well that and my almost retired status allow me to make mistakes… 73 Paul

Hi Paul, after the last couple years of parking muppetry many of the nooks and crannies for parking are rightly closed off. The national trust car park at the bottom of scale hill is the most appropriate place to park. The walk is a touch longer but the access from the walk can include a bit of Crummock as well.

Loweswater used to be relatively empty, especially at this time year, now it is either busy or very busy.