For my first activation of 2022 I chose Mealna Letter - not too high, given the windy forecast. As it turned out, the wind was not much of an issue.
Route up followed Gavin’s GM0GAV and not the unpleasantly wet one used recently by Fraser MM0EFI. The start point is close to the entrance of a no-through road that leads to Dalnaglar Castle, off the B951, with easy parking right at the start of a forestry track. The Castle, with accommodation for 20, is available for holiday rentals from £6300/week. The entrance to the track has a locked gated barrier with a walk-around and then its a straightforward plod upward through the trees. Keep right at the only track junction. Once out of the trees, the track rapidly disappears in the tussocky grass and you need to just angle east or northeast towards the large wall that runs continuously up to the top of Mealna Letter and also forms the East boundary of the Cairngorms National Park in this area.I guess it is/was also the eastern boundary of Dalnaglar Estate. A wire fence parallels the wall on the East and a bit further up a similar fence also appears on the West. Occasional large gaps in the wall allow switching between sides. I initially went up the West side and then crossed through the wall to get some cover from the wind. About 2/3 of the way up there is a fixed wooden barrier to climb over and then you just follow the wall to the top. It took me 1 hour 30m, arriving at the summit at 10:00. When coming down, I followed a fairly clear single track path which descends on the East side of the wire fence but then climbed back over the wooden barrier again, as I was unsure if I would find a break in the wire fence further down.
Route up: 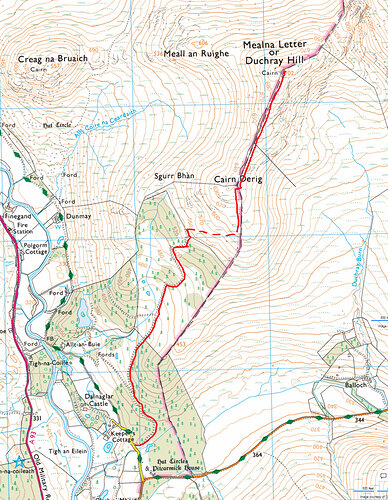 The wall and fence continuing downhill to the north of Mealna Letter summit. 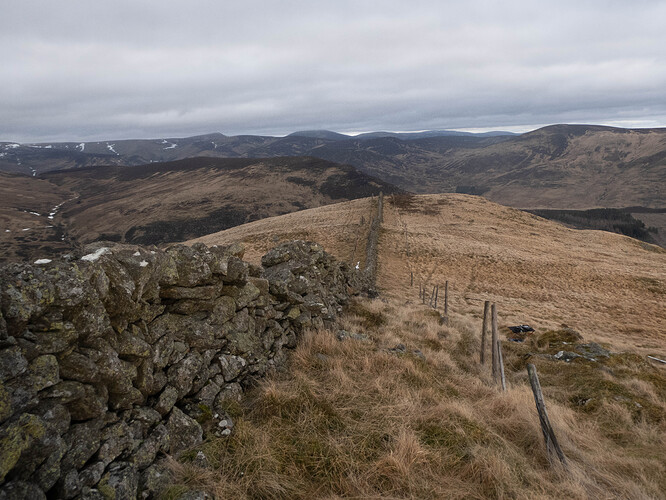 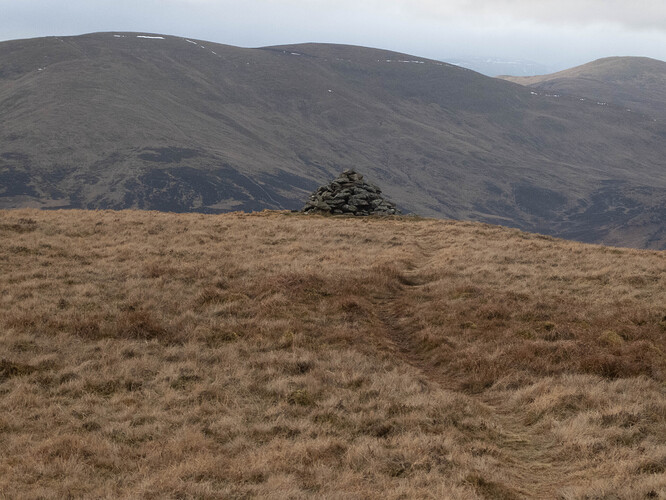 I set up on the East side of the wall and a bit down-slope to get some shelter from the wind.
End-fed and delta loop, with some sun and Mount Blair GM/ES-035 in the background

As the tropo forecast maps had indicated some possibilities I had brought my 2m beam for a change and set that up first. I also knew that Fraser MM0EFI was going to be on GM/CS-108 so wanted to try a S2S with him. Tuning around on 2m ssb I heard the usual nothing but put out a spot and called. Straight away I was called by Don, G0RQL, down in Devon. At 410 miles that is my furthest 2m SOTA QSO to date. What a great start to the day! 2E0BTR Geoff in Worcs was next in the log and then GM0VEK Peter in Glasgow. Then…nothing. 5 minutes of CQ brought just silence, so I guess the lift had gone. With 2m quiet, I put up my endfed. Just before I was due to start on HF, Fraser texted to say he was ready for a S2S, but on FM. He had to wait a few minutes for me to take the yagi down from my aluminium mast and attach it to a collapsed fibreglass mast which I then hand-held. I heard Fraser calling but before I could call him another station GM0GLM/P Jim called him from Hema summit GM/HSS-129. I then had my S2S with Fraser which gave me the 4 for qualifying - all on 2m, another record for me. I then QSYd to QSO with Jim - unfortunately the first freq we chose was occupied by the GB2RS newsreader who politely asked us to QSY, which we did and finished the contact.

A spot on 20m resulted in a nice run of 22 contacts including 5 S2S. I was pleased to get a lot of regulars in the log including Guru EA2IF and the ever realiable Manuel EA2DT. Signals were very good, often 59 both ways.

Switching to 40m brought another 17 with 1 more S2S. Don G0RQL, told me that earlier on 2m my signal had peaked at 55 with him.
I then tried a S2S with Stavros SV2RUJ/P on 20m but unfortunately his battery died before we had exchanged reports.
10m was dead, but 15m was open so I put up a delta loop for a short run of 5, including 3 from Greece.
Back on 20m I chased 4 more S2S and then put up my 17m delta loop. The band was very busy and I had a hard time finding a clear spot - many big EU signals were spreading 3-5Khz either side. I finally found a fairly clear spot and had a run of 9 including N4EX for the first “across the pond” QSO of the day and Dinos SV3IEG who had also chased me on 15 and 20m. I then had to QSY due to the EU QRM problems, but the second spot brought a good run of 14 including K2VV in Missouri, who gave me 57 and was best DX for the day.

104 QSOs for the day and 10 S2S. Thanks as usual to chasers and activators and see you on the next one.

A grainy shot of Dalnaglar Castle at dusk, from just above the tree line 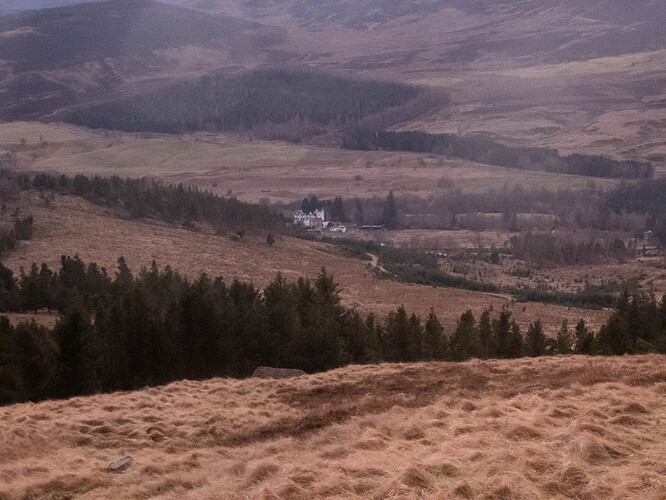 Hi Ludwig, thanks for the feedback. Much appreciated,

Many thanks for the interesting report Simon. I was a bit surprised to see far less snow than when I activated Mealna Letter in December… looks like I need to get myself north of the border ASAP.

The timing of your 2m operation was not that different to mine when I too worked Don and several others. It would appear that ducting down to the south south west may be something that regularly occurs from this area at about that time of day. All we need now is for Fraser to go and test the theory.

It has been so warm lately. Just about all the snow has gone from the hills.

Excellent report, many thanks. 15m was very good late morning. I had a short session on FT8 and had a QSO with Brazil and saw a call from VK but I was in the middle of a different QSO at the time and when I was free it had gone. 40m SSB was very noisy for me and I could hardly hear a couple of UK activators.

Thanks Simon for your fine activation report and photos.

I heard a very strong A61, but not much else in the way of DX, but then I didn’t tune around very much. Strange how 40m can be so variable just within the UK - I found it fine.

Good Job with the activation Simon! I must get back up there. Its a nice hill. It’s very un-Scottish, what with It’s name and the dry stone wall running across the top. I look forward to trying the “dry” route!

I’d finished on 20m. Mo and I were getting rather cold, so my last job was to look for you on 2m. I ended up with another couple of contacts and I suppose if I’d spotted on 2m, I would have got more.

Thanks for sticking around for me Fraser (and Mo). Its always nice to get a S2S.