A Saturday (16th July 22) with a good forecast is not to be missed, so I picked Meall Mor as it’s a 2 pointer with a relatively short walk-in, my knee still not being 100%. The parking spot is about 1 hour 15m from my home QTH, on a minor road signposted to Blacklunans, off the A93. The route up initially follows a forestry track for about 100 yards and then you have to turn left into a clearing, which is bounded by 2 dry-stone walls. Follow the right-hand wall all the way up to where it meets the left-hand wall, cross over it by the junction and then follow the left-hand wall up to the top where it meets another wall which runs along the crest past the summit cairn. There is no path and you have to pick your way carefully through calf-high grass and heather. Just below the top it gets pretty steep so I traversed around that. I was very glad of my walking poles, particularly on the way back down.
Route map 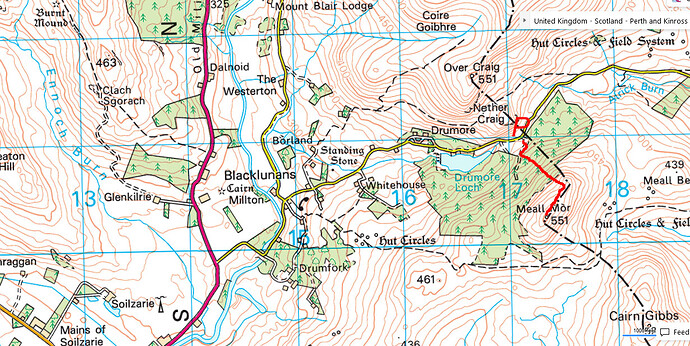 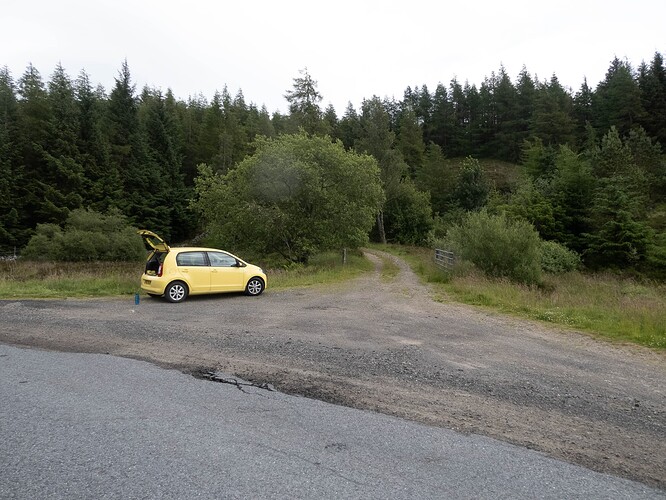 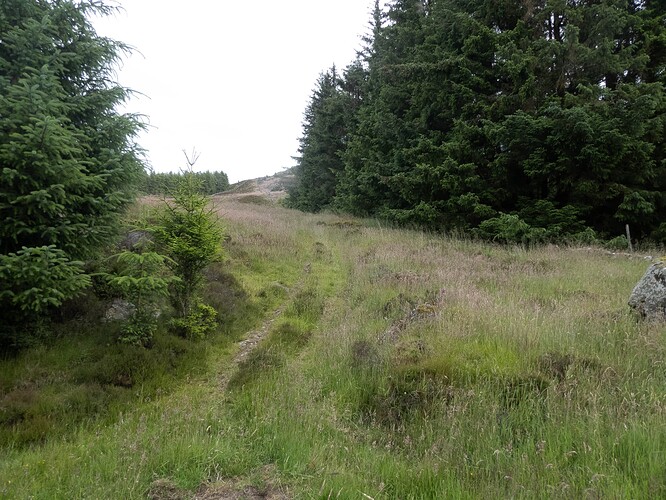 Looking down from the first junction point 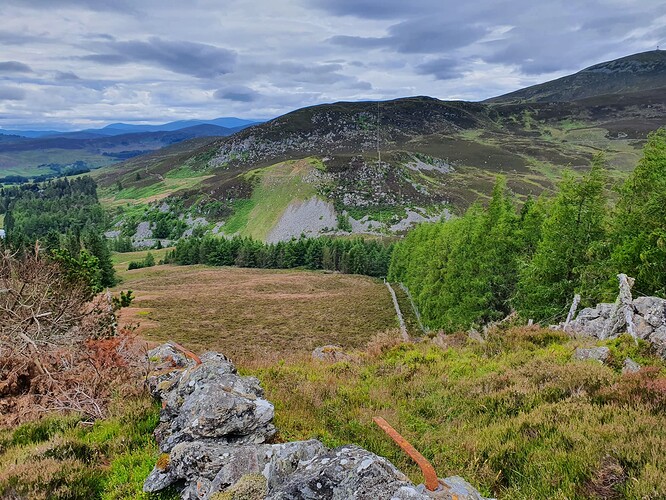 Looking back down the crestal wall 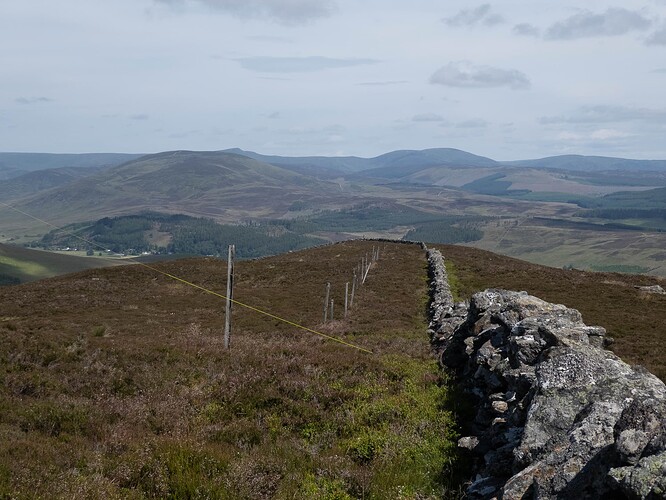 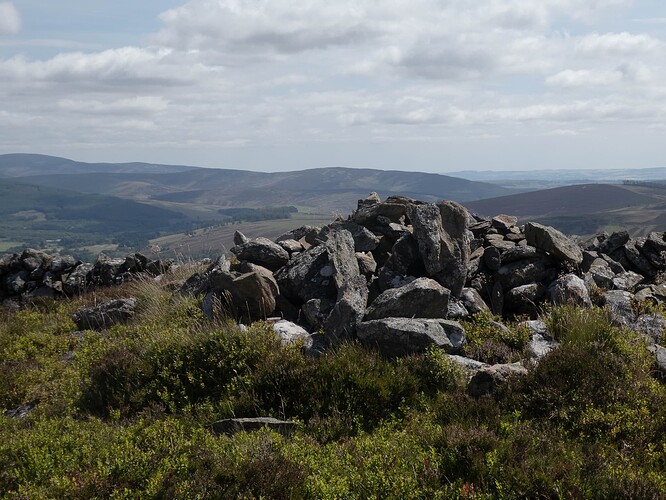 It was quite breezy at the top, with the wind from the NW so I set up the operating position just down from the cairn on the SE side and was nicely sheltered. 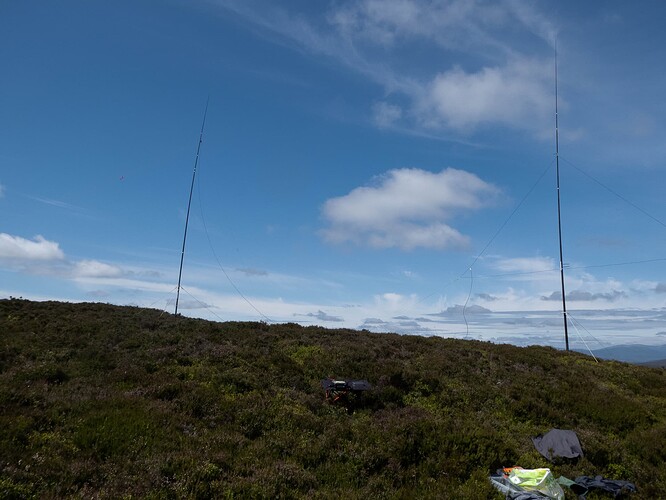 A cheeky bird on my dipole 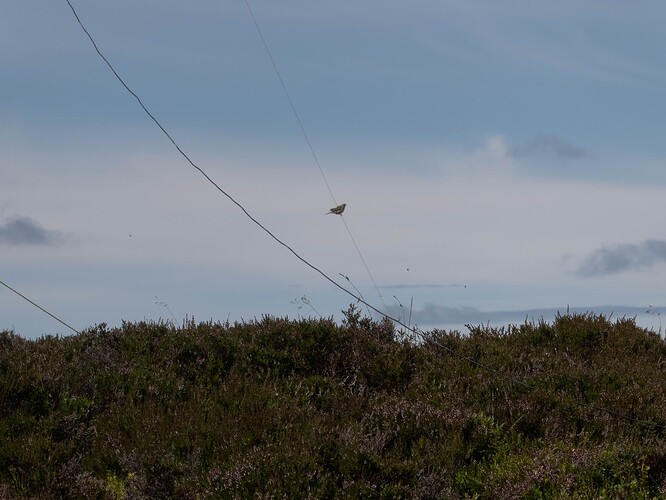 Activation summary
Overall, the bands weren’t that great, with a lot of QSB and I couldn’t hear many of the EU summits that were on 40m. In fact I started on 40m with a failed S2S with DL3TU/P - I just didn’t copy my report - too much QSB.
A spot brought a short run of 15, including 2 S2S, with Don G0RQL, first in the log. It was nice to work Tim, G5TM, who was my first SOTA chaser 2 years ago.
Moving to 20m, signals were stronger but still with a lot of QSB. 21 in the log including 4 S2S (IK2LEY/P, SV2CNE/P, OE7RDI/P, EI3ISB)
On to 17m, I picked up a S2S with HB9GUX/P and a spot brought another 11 chasers including 2 more S2S(HB9CDH/P, OE6CBX)
12m sounded quiet but I heard OE6CBX so picked him up for a S2S on that band. A spot brought 3 chasers, including Chris F4WBN and I think that is the first time I haven’t been able to give Chris a 59. report

Dropping to 15m brought 9 chasers including a S2S with HB9GVW/P. Seeing a spot for IW0HK/P on 20m I QSYd quickly,made a S2S with Andrea and then went back to 15m where I managed a non-SOTA QSO with 4Z21MG, a special call for the Maccabiah Games in Israel. Another spot brought a further 11 chasers including a S2S with OM/SQ9MDF/P; unfortunately the QSB made Wioletta disappear so I failed to complete a S2S with her after I finished with Leszek.
10m seemed dead but I spotted and called for about 5 minutes and managed to raise a local, Paul 2M1EUB. Straight after Paul, D08SD called and we had a 58/58 exchange. Further CQs brought nothing though.
Going back to 20m brought another 21 chasers including a S2S with LA9DSA/P who I see from his FB post was operating inside a nice warm hutte on his cold and wet hill

Paul 2M1EUB followed me down from 10m and we exchanged 51/51, presumably on groundwave.
I finished the day on 40m and after a spot I called for about 3 minutes before getting a response, but eventually got another 12 in the log including Brian MM1HMZ and Don G0RQL for a second time.
All in all, a really nice day out. Great weather, beautiful views and 109 in the log including 15 S2S. Thanks to everyone as usual.

Views from the top
Looking North- dominated by Mt.Blair GM/ES-035 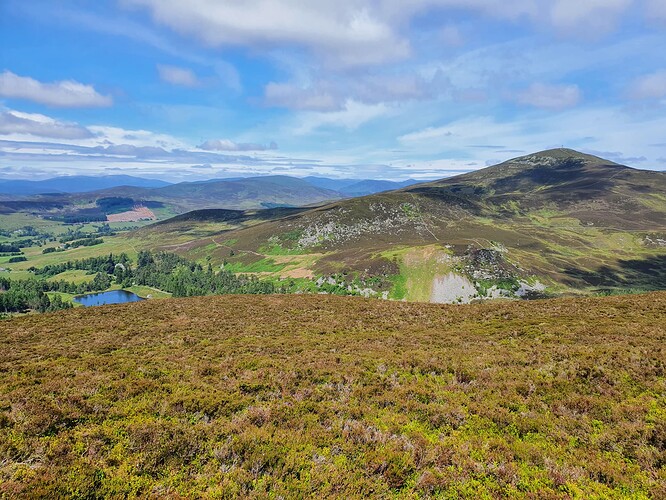 Looking North over the shoulder of Mt.Blair at Cairn Toul GM-ES/003 (I think) 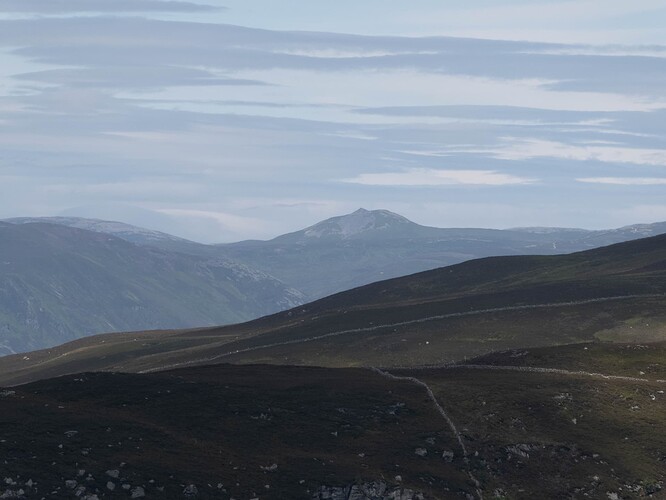 Looking WNW with Schiehallion GM/CS-005 on the horizon (28 miles). Thanks to Fraser MM0EFI for correcting my ID on this. 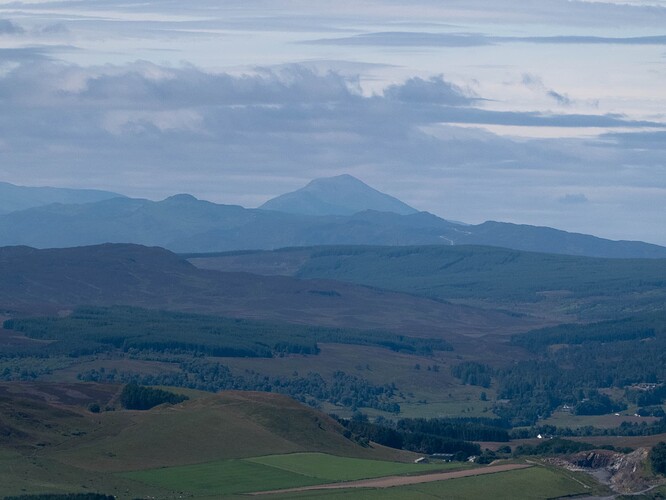 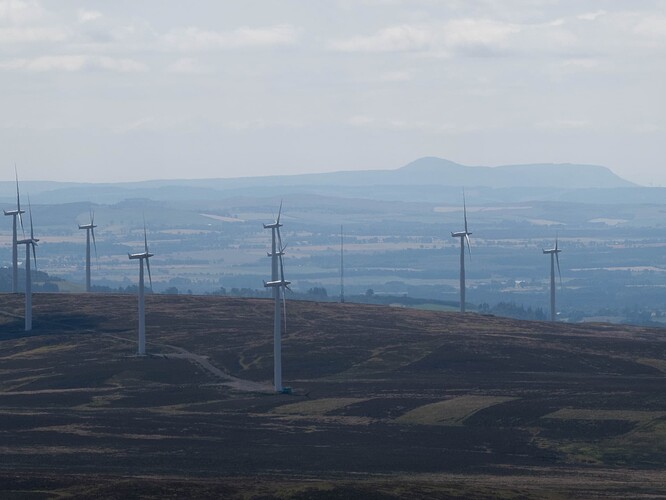 Looking NW with Drumore Loch in the foreground. 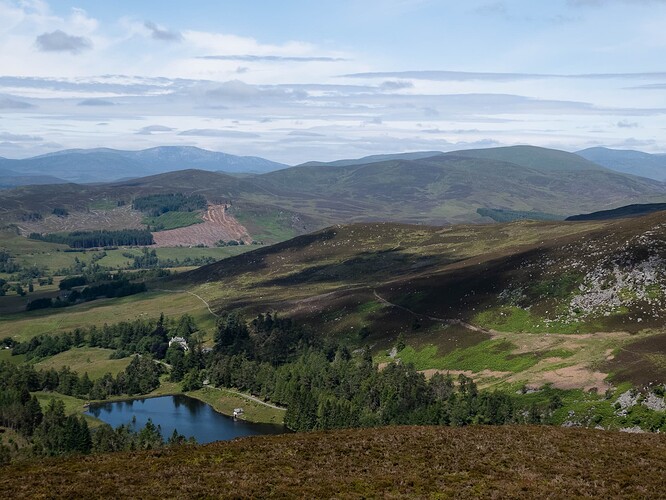 One of my favourite hills this and it’s ever so nice. My starting point is a few hundred metres further NW than you and it take me about 35mins to the top. For not much effort you can get 5pts in the Winter and there’s a wall for shelter if it’s windy and cold. I normally tag it on as a bonus after doing something bigger.

Simon, Great report! Sorry I wasn’t around to chase you. I think your Cairn Toul may be Carn an Righ GM/CS-020. It has a distinctive top. Over to the left of that you would have seen the three mountains that make up Beinn a’Ghlo.

I need to do this one.

Overall, the bands weren’t that great,

Glum face in my shack as I could hear some of your chasers but not you.

Good report of a nice hill, though. Thanks.

I could hear some of your chasers but not you.

Many thanks for a great report Simon. I was travelling when you were on, so not near an HF radio to work you. I’ve got that summit earmarked for the winter period to gain the extra points.

earmarked for the winter

Fraser has the same idea. With Mt.Blair so close it could be a winter double…

I could hear some of your chasers but not you

I’m really struggling to find that distinctive “pimple” geometry on Google Earth - maybe its an optical illusion, with the pimple being a peak behind. On the other hand, maybe Google Earth is just not up to it… Happy to go with your alternative suggestion Fraser. 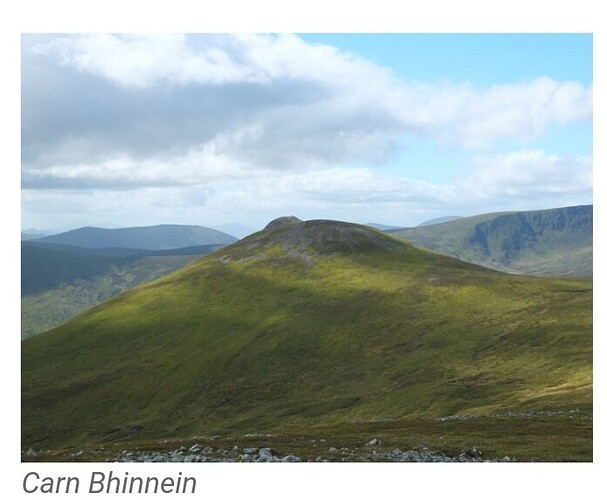 Looks a good possibility and lines up well with my image. Google Earth’s satellite imagery in that area is pretty poor.

With Mt.Blair so close it could be a winter double…

I’m thinking a trio of 2 pointers with Hare Cairn GM/ES-063 and Crock GM/ES-056 to get a nice 15 pointers. Headlamp and spare at the ready!