Another awesome day in the Lakes today - starting at 05:00 from home I was ascending from behind the Patterdale Hotel at around 05:45 and on St Sunday Crag by 07:30. Two mountain bikers were feeling the burn on the steep ascent up Black Crag - they sensibly took the low path that skirts to the North of Birks, I doubled back and then followed the OS map track which hit the ridge line of Birks and thankfully didn’t lose too much altitude before the grind to the top of St Sunday Crag - a classic blind summit ascent.

On St Sunday Crag Fairfield doesn’t look such a trek - maybe 1/2 hour each way, but you don’t see the loss in altitude and somehow Cofa Pike doesn’t look that steep. I decided to press on with the allure of another 8 point activation, but of course this was to add significant time to the trip.

I’m no fan of Fairfield Summit itself - it’s like stepping on to the moon, but the take off is great and the views awesome. There was a slight chilly breeze from the West that required the addition of layers as the activation went on. First 2m on the handheld to catch the early risers. By the time HF was done I dropped the pole to take some photos of a couple of fell runners and then after the 2m activation I had my photo taken by a local lass who was also doing an early morning horseshoe run.

Back on St Sunday Crag the plan was to do a quick activation of HF bands then drop the SOTABeams quad-bander and attach my new antenna, a 10m dipole which is a new band to me. The plan is to add links to this antenna to support 12m, 15m and 17m but I hadn’t go there yet and anyway I was already running around an hour behind schedule. After 5 minutes of calling CQ without the antenna plugged in to the amp (summit brain!) there were a couple of unconfirmed contacts on 10m before we got one in the log with MW0ISC at 10:37, so that is now another band ticked off on this summit.

Other highlights were a conversation with EA1/GR1VQI/P who I think might have just been monitoring the 40m frequency I chose - he was using a Clansman PRC-320 with 1/4 wave whip - a rig I thought of briefly for SOTA before I tried one on my back.

Thank you to all the chasers, it was a real adventure which my knees are keen to keep reminding me of. 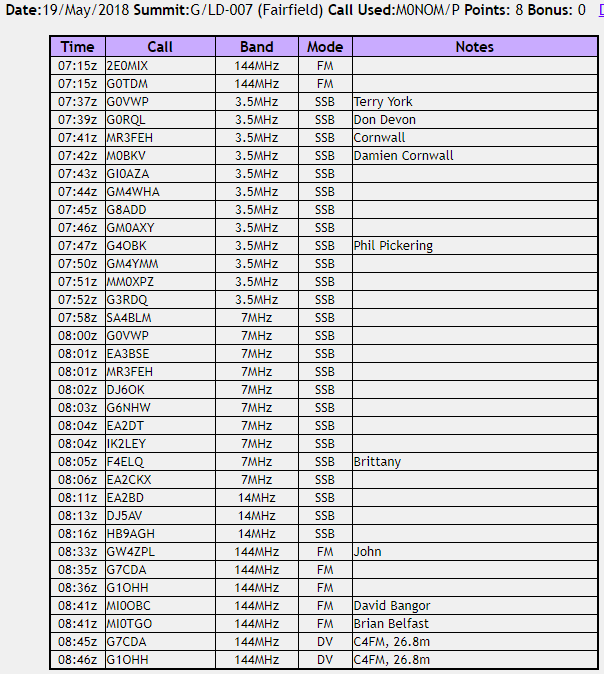 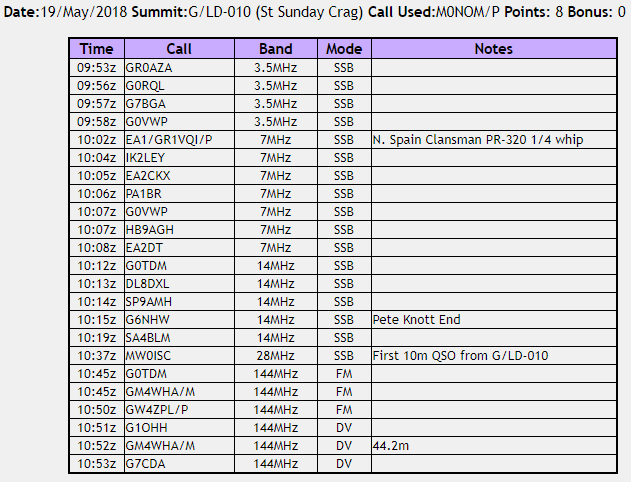 The scores on the doors 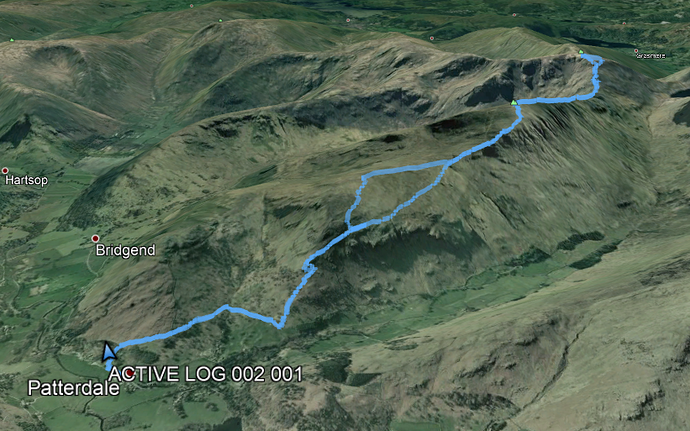 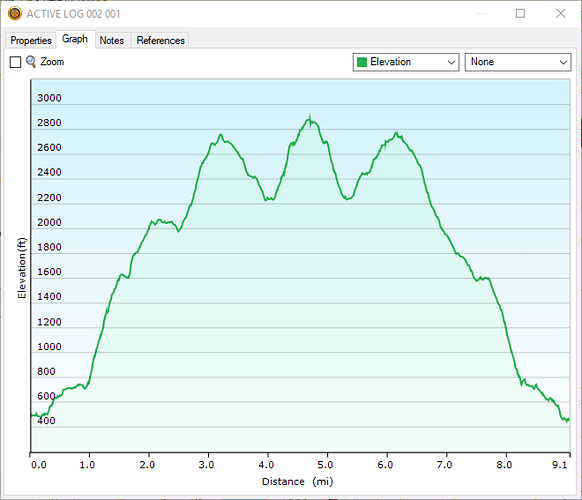 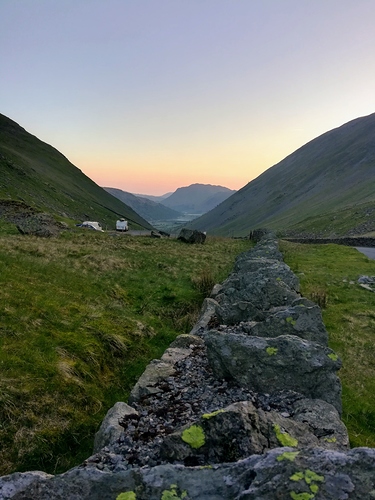 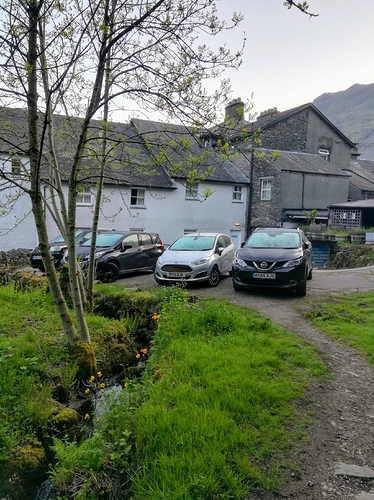 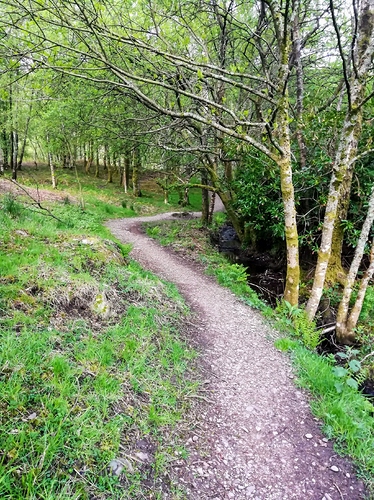 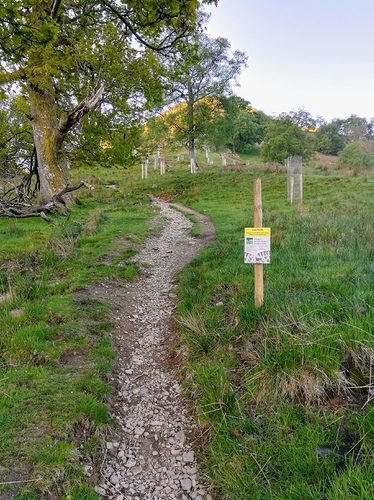 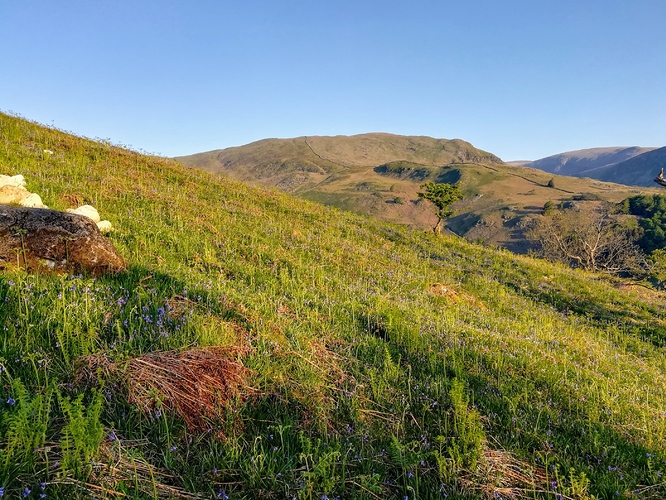 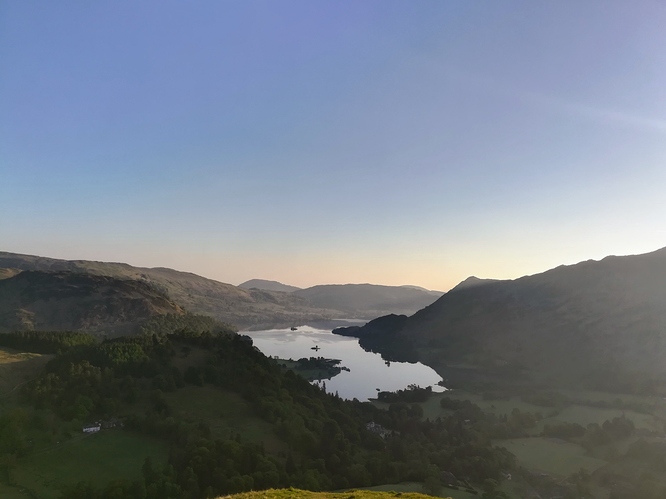 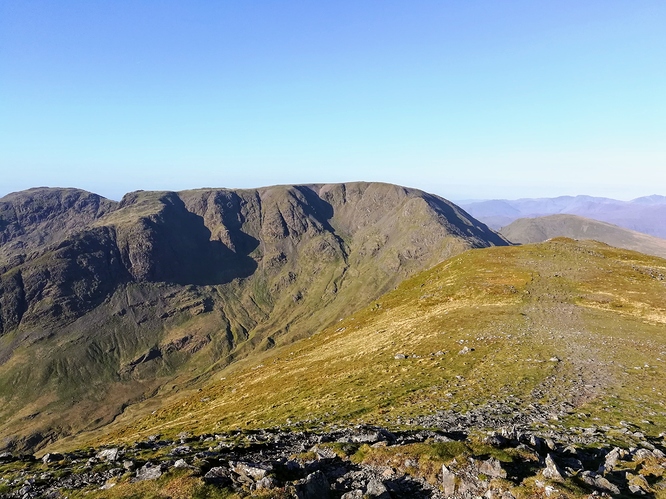 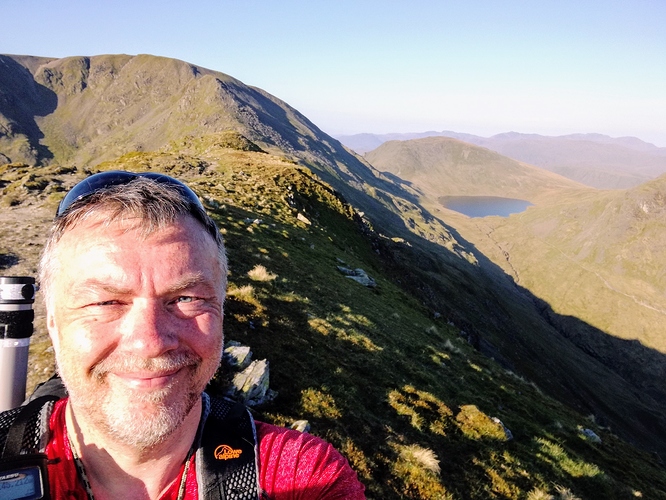 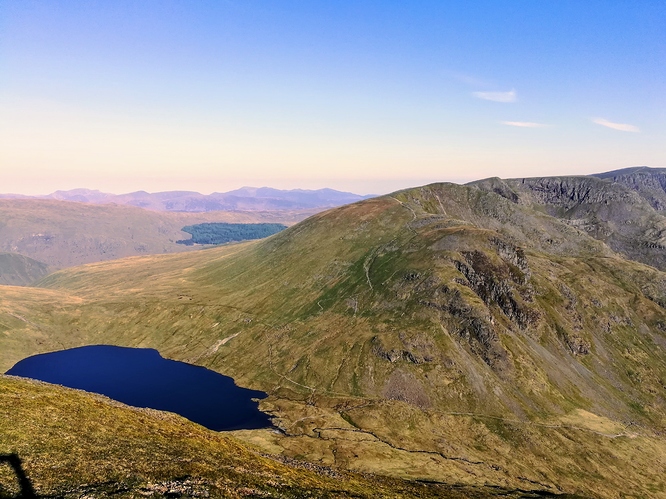 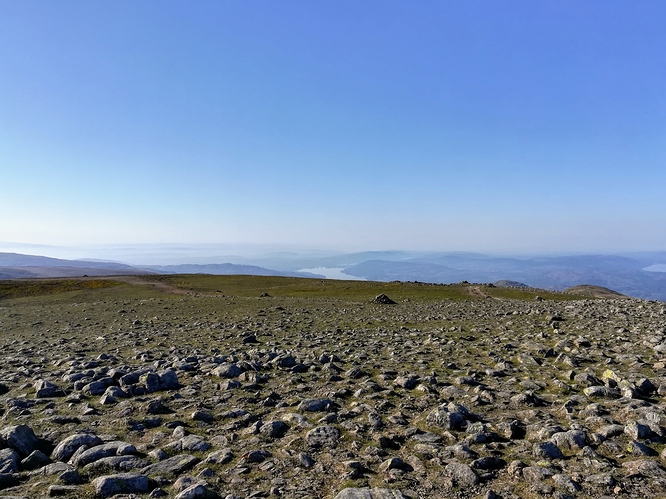 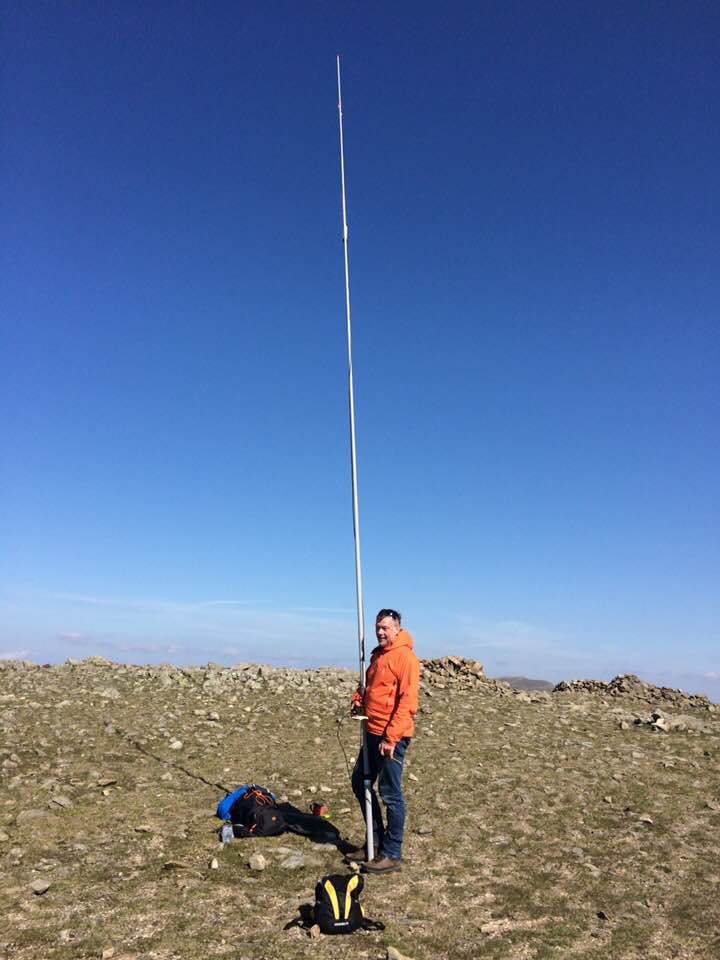 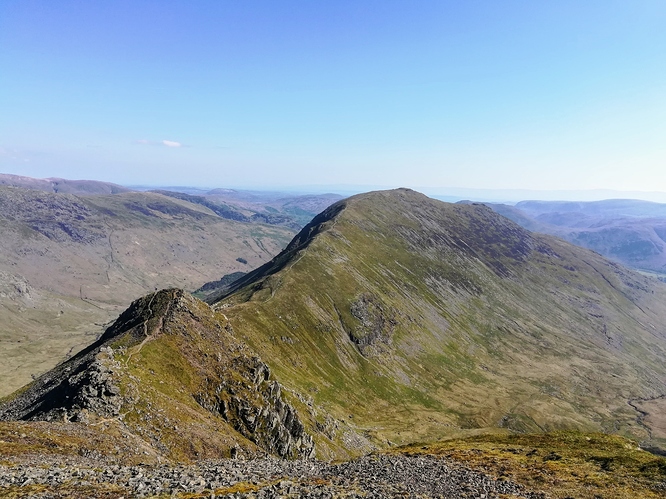 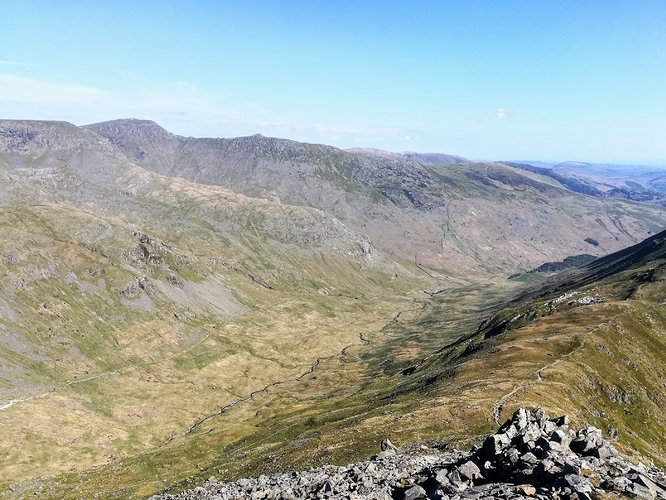 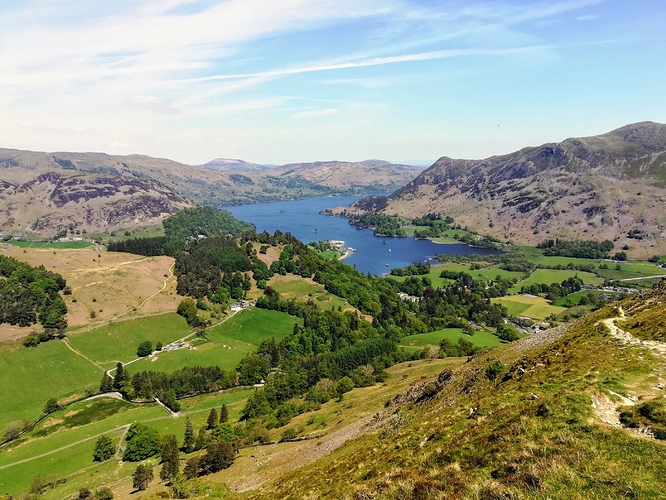 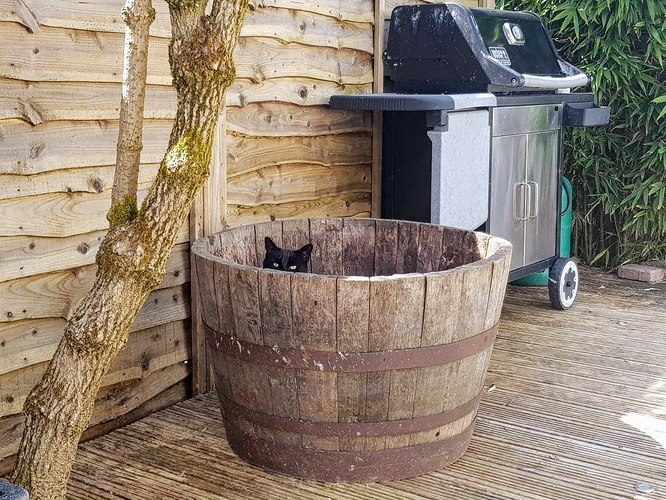 Nice photos again Mark. Both technically and artistically. Though it helps when the sun and nature play their parts and help you out!

Funny thing, I’m in my 50s and started infants and primary school using Lsd (no laughing) feet, inches, gallons and miles but didn’t start using metric till secondary school. I still work out mpg for my driving not l/100km despite buying fuel in litres. I think of things which are small, in cms and at 5cms things become inches. So I’ll drill a 3.2mm hole (M3 clearance) in a box that is 6in x 8in x 4in.

But I walk in metric. So if you say it’s 80km from here I have to convert that to 50miles to get a mental picture of how far away it is and how long a drive. But if I see a summit route work out at 12km I immediately have a total feeling for the distance. Likewise a 700m ascent has feeling, I know how much sweat is involved almost instinctively.

So I look at your trip distances and ascents and think… huh? I need to go and do some sums to see what you did and I don’t think you are old enough to walk in miles!

Just spotted that… I very much doubt that is a legal CEPT operation!

Ditto. Then I have to convert to Old person numbers for Cat, yet she happily uses metric knitting needles!

I really ought to get a trip to the lakes organised. I know what you mean about Fairfield, it’s not great for putting in guying pegs either!

Regarding units, at college I had to work in both inches and millimetres. These days I adopt a similar approach to Andy, choosing the units depending on what’s being measured.

Regarding miles/km/gallons/litres etc - same issue here. We can blame the change and schooling on confusing us but I also think if you have two systems of units you might well just pick the ones that are a good order of magnitude to the problem.

I have to say if the stats from the GPS are confusing, well same here, I didn’t really look at the units but I will update the picture to metric which I also understand better.

When trying to lose weight I found working in lbs and ozs just a pain so I taught myself to know kg and that is a much better indication of the % you are losing!

so I taught myself to know kg

Oh body weight in kgs is much simpler. I no longer know my weight in stones, just kgs. I don’t ever need to use stones or pounds as my diabetic clinic uses kgs. In fact I’ve forgotten the kgs <> stones factor… ah yes, 0.157, a calculation that is simple for mental arithmetic!

What’s the camera? I’m guessing a DSLR or a recentish iPhone.

I’m happy to surprise you, guess it must be the operator

I upload to Google Photos automagically and tweak using the auto setting before uploading.

thanks for the report … and for the audio-file where I could listen to my weak signal at your end when I tried to get you in the log for a S2S from OE/OO-360! Sorry we could not make a valid QSO. I tried to listen for you on 10m as well, but could not hear anything. When I tried to contact you on 20m you were solid 5/3 on my KX2.

As I can see on your photos you had absolutely lovely weather. At my summit big thunderclouds were building up, these clouds forced me to leave the summit early as I did not want to get into rain and thunder.

Sorry, but I have no photos of the activation to share.

Hi Martin, we gave it our best shot, that is all that we can do!
I didn’t have enough time really when I got to St Sunday Crag so everything was a bit rushed, would like to have got a couple more 10m QSO’s in the log but it is a fickle band clearly!

I would be lying if I didnt say I was a little jealous of the wide open summits. Here in the southeast US, many summits are tree-covered which provides nice wind and sun protection, but makes putting up antennas very challenging.

I was quite surprised when I started walking in the Lakes how lacking in features a lot of the summits are. There is a limit on the height at which trees will grow which explained to me why the Romans used to build their roads high up across ridge lines - it was because they were out of predominantly forested valleys and hill sides. One of my favourite summits is High Street G/LD-0011 which has an ancient Roman road running across it.

One of my favourite summits is High Street G/LD-0011 which has an ancient Roman road running across it.

Looking north from LD-011, across a sea of clouds. 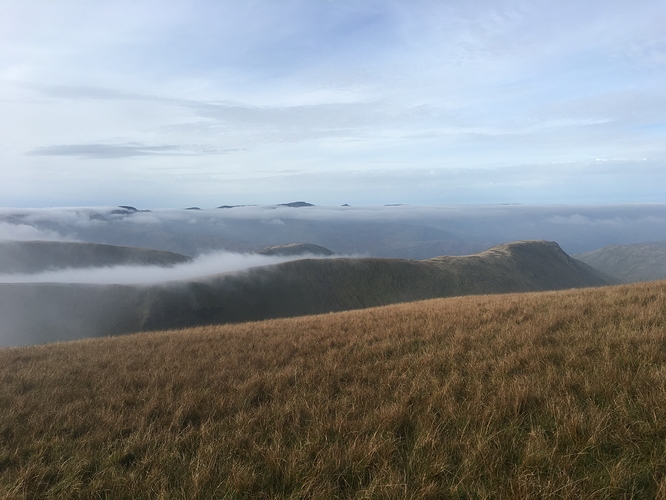 All photos are good especially with a bit of atmospheric cloud. I really love High Street - like being on a field in the sky. Haweswater looks magnificent from there and is long overdue a visit.