Having alerted for an early morning SOTA activation I came to my senses when I woke at 4am and decided to catch-up on some much needed sleep. We visited the Lakes Distillery (they make Whisky, Gin and Vodka) as part of a belated Father’s day present and had a tour and afternoon tea - highly recommended and a good deal with a groupon voucher. I controlled SOTA-pangs looking up at Skiddaw (yet to be activated by myself) as we crested the north end of Bassenthwaite Lake where the distillery is located.

On the way back via Keswick I suggested a quick visit to the Castlerigg Stone Circle which I knew was accessible to Alex’s parents with just a short 2 minute walk from the road. Great views of Blencathra, Helvellyn, Skiddaw and the Western Fells. Not as pretty as my last visit with my mother when there was still snow on the tops, but a great view none-the-less. Alex and her mother were convinced that standing in the centre of the stones was having an impact on them - there’s definitely witchcraft in that side of the family!

Subsequently when I found out that both kids were on sleepovers and Alex was out for the evening I took the opportunity to grab the prepared SOTA rucksack and head out to one of my favourite summits Red Screes. Criteria in this case were a quick ascent and a known descent as I knew light was going to fade by the time I was on my way back to the Kirkstone Inn.

Conditions on the summit were good with a light wind - albeit with a little cold bite to it. I did a 2m activation on my handheld on both FM and C4FM with our fantastic regular chasers @G7CDA, @G1OHH and @G0TDM.

As I approached a guy that had set up a tent on my way a little from the trig-point to setup HF I engaged in a conversation with an ex-ham who was active as a G7 back in the 90’s but decided to leave it behind in pursuit of other hobbies. He is a wild-camper with some heritage on youtube, his channel is ‘Daves Wild Camping’. When I heard his Gordie accent I thought I may have watched some of his more extreme camping videos, and indeed he had attempted to set-up a tent on Great Mell Fell in 80mph winds which is the video I remembered.

HF setup followed with only three 20m QSOs, Manuel @EA2DT pouncing almost immediately although fairly weak (we later had a much stronger 40m QSO) followed strong groundwave from John @G0TDM and one of our consistent German chasers @DJ5AV.

I then swapped straight to 80m which was working extremely well and gained me the majority of contacts, we were definitely into pile-up territory! Esther @GI0AZA and Ian @GI0AZB were straight on the case followed by Ken @G0FEX. John @G0TDM had contacted Geoff in Annan @GM4WHA and it was great to work him on 80m although copy wasn’t great from his end - without the Slim-G it was unlikely we would have been able to work 2m.

Thank you to all the other chasers! The sun finally started dipping below the mountains at around 9:45pm BST when, after a few photos, I decided to pack up and head down. Although there was still some light it wasn’t good enough to trust footing so the headtorch was donned. On the way down, just below the summit, I turned the handheld on and was surprised to be getting full-scale deflection from two Welsh stations on 70cms, one on the mainland and one on Anglesea. I had a quick conversation with both stations before continuing the descent. A great evening - had I not been leaving Alex home-alone I would have considered camping over, it can only be a matter of time! The Harris military handset worked well with its’ excellent audio reports and the ability to channel output to the MCHF speaker into the headset. I was using the MiniPA50 amplifier and SOTABeams quadbander dipole with travel mast at around 8m. 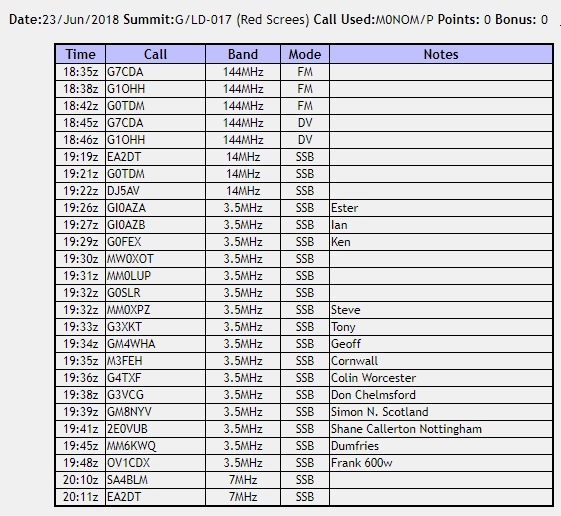 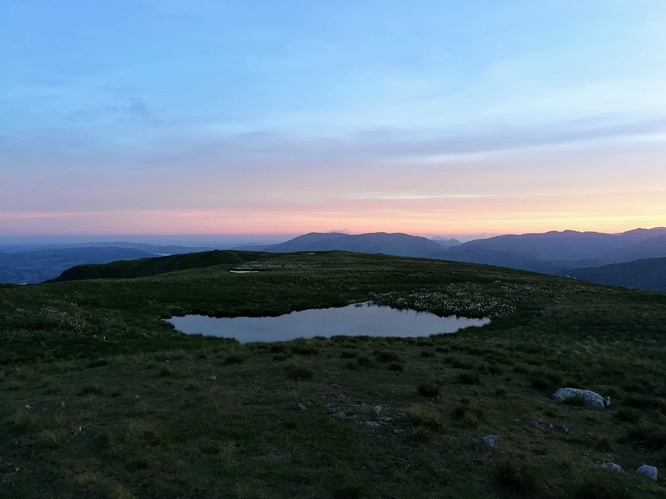 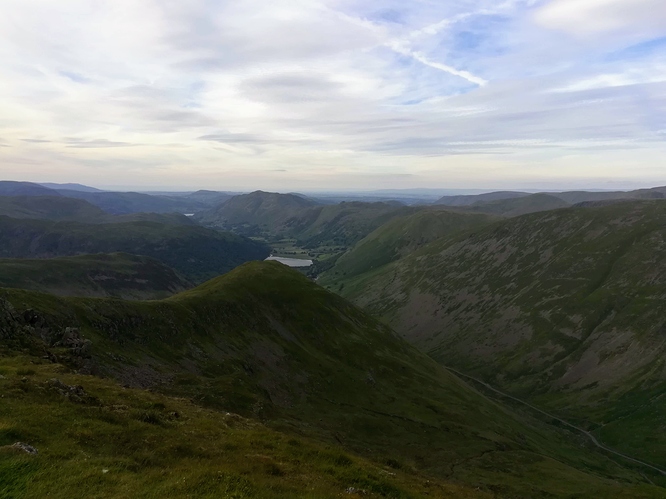 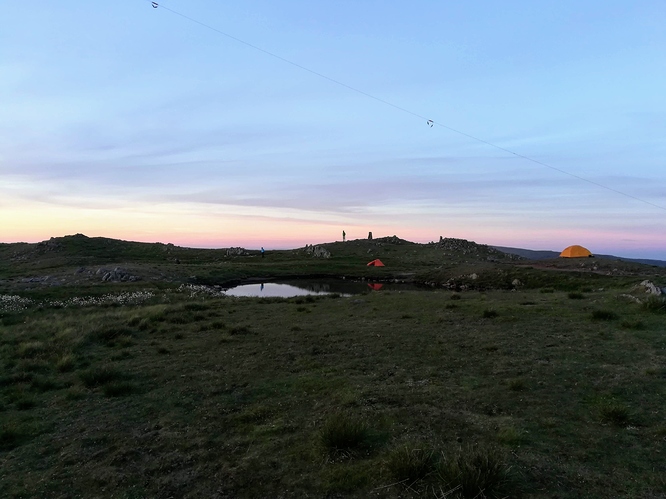 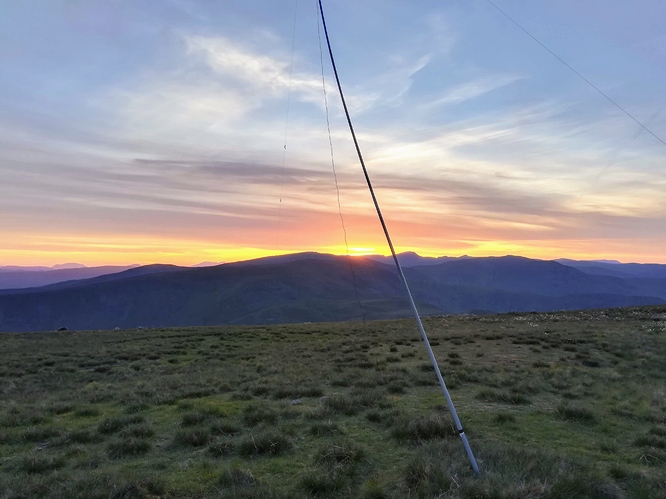 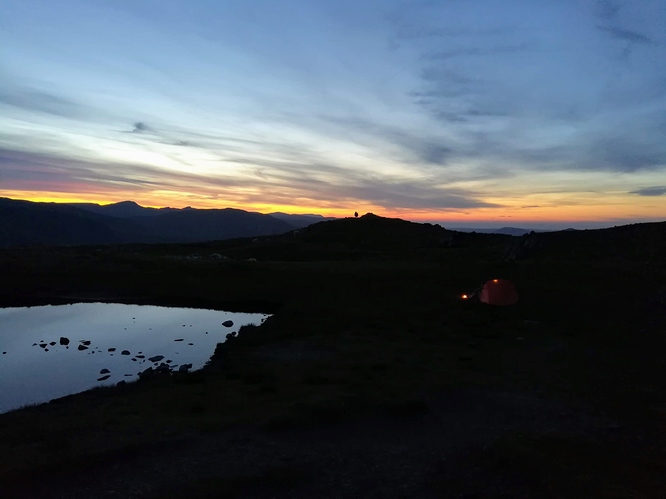 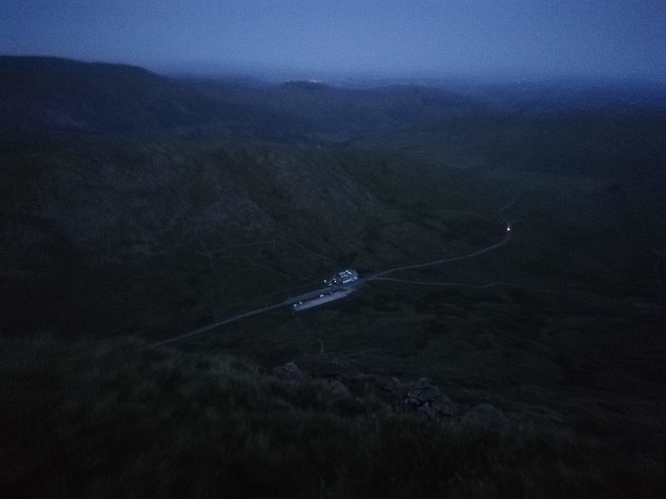 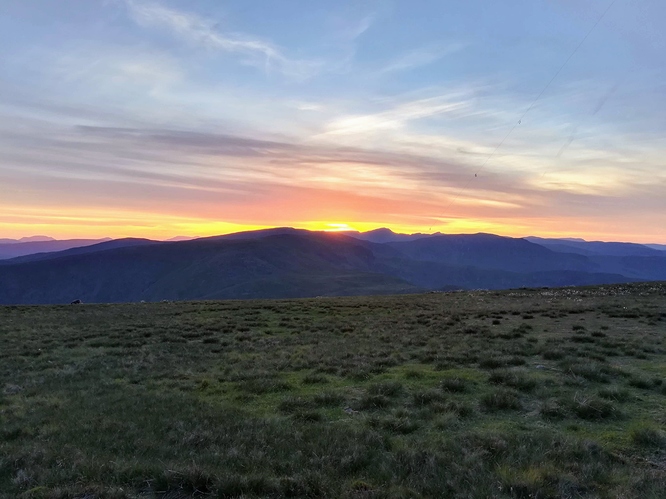 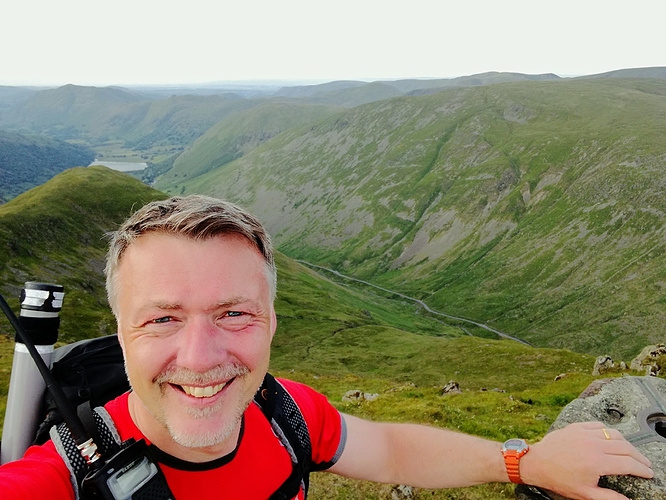 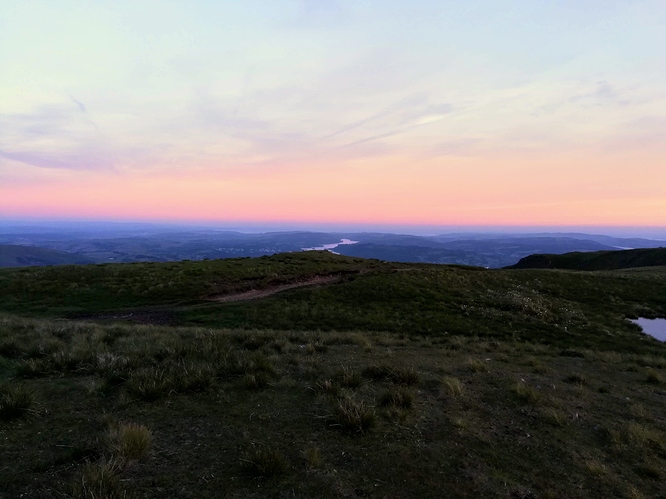