Looking for a G/SP activator in May

In the beginning of May this year I will make a one week trip to England, half business and half touristic. In May 3rd I will be in Crewe, free of any duties. So I am thinking to find there, if possible, someone so kind to take me to a quick & easy SOTA activation near Crewe, maybe on G/SP-004, G/SP-013 or G/SP-015. It’s about putting England on my list of activated countries. I will travel by plane, so I will not have a car available or HF equipment. I am working only in SSB on HF. Or I could bring my handy to work on VHF FM.
Is there anyone available? Thank you!

Looks like Tom M1EYP is down south with a gig that day so he’s out. I don’t own a car so I cannot help either.

A possibility you could do on your own is to get a train to Macclesfield and then get on the bus to Buxton (both regular services). The bus passes the normal starting point for the short walk up SP-004. Happy to help with planning the logistics.

A 2m handy should be adequate to qualify the summit.

There’s quite a cluster of SOTA enthusiasts in Crewe - Jake 2E0SEY is a currently active activator that springs to mind. Maybe Mike 2E0YYY is worth contacting as well?

Well, I will wait a couple of days to see here if someone can join me. If not, I will try to use the train & bus as Richard suggested here. Thanks anyway for ideas!

Great news Neil, I’m more than happy to activate together on Shining Tor, I saw already all the videos on internet about this summit, hi!
I will give you an e-mail with details about my trip and my mobile phone number, and hope to have a decent weather forecast for the 3rd of May.
Keep in touch!

Sent you an email , loo forward to hearing from you

Got the mail from Neil & very happy to find the solution for a SOTA activation in England, “a bridge too far” for someone living in Eastern Europe. All my thanks goes first to Neil, but also to Richard & Tom for ideas.

I had forgotten all about this visit. As Richard remarked up the thread, I was scheduled to have a gig in Stratford-on-Avon on the evening of Wednesday 3rd May 2017, so no SOTA plans were made. As it happened, the gig got cancelled, and instead I arranged to meet someone who was buying some radio gear from me.

After concluding that piece of business, I was driving back on the Buxton to Macclesfield road decided that I needed a walk. I am overweight. Well, I always am, but I am too overweight at present, so really need to improve the regularity of exercise. My VX7R and waterproof notepad were in the car, which was all I needed.

At about the halfway point of the walk, I met Neil M0WBG and Sorin YO2MSB. This was a very pleasant surprise, and we walked the rest of the way together and enjoyed an excellent chat. 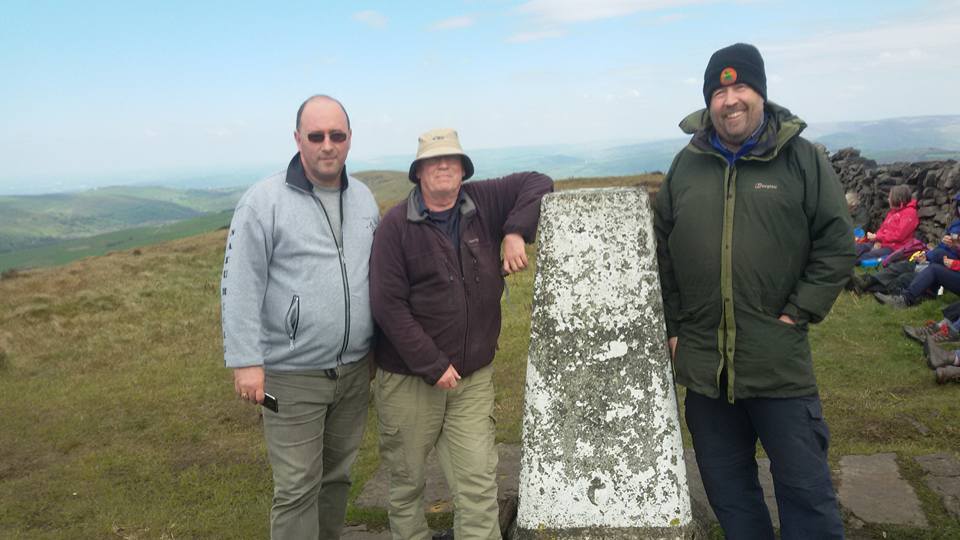 At the summit, Sorin was amazed at the possibility of switching on a VHF handheld, immediately getting contacts and qualifying the summit with ease! He was even more amazed that the first QSO was a summit-to-summit - with Tony G7OEM/P on Pendle Hill G/SP-005. My rig was passed around, allowing Neil M0WBG/P and Sorin M/YO2MSB/P to also collect the S2S contact. 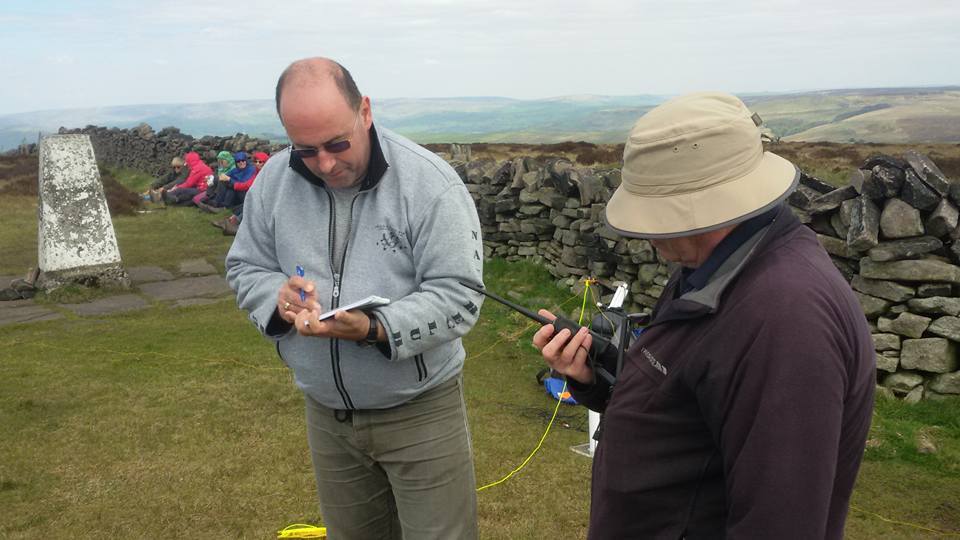 I made a total of 7 QSOs, 6 on 2m FM and 1 on 70cm FM. I said goodbye to Neil and Sorin and started my descent. During the return walk I called and worked M0JZT/P who was activating The Wrekin G/WB-010, and back at the car I was able to work both Neil M0WBG/P and Sorin M/YO2MSB/P, both still on Shining Tor G/SP-004 of course.

Nice to meet you guys.

It was a perfect activation for me, the very first one in Great Britain. I had the chance to meet Neil M0WBG who is an excellent partner for activations and a very kind OM. I was impressed about his knowledge of a wide area of subjects, we chat practically all the day about a lot of ideas and issues. Tnx agn Neil, you really made my day.
Another big surprise of the day was Tom M1EYP, we met just before reaching the summit. A very kind OM also, I liked a lot to be there on the summit with both of them.
The weather was good, a little bit too windy, causing sometimes QSB and affecting the integrity of the pole used. But the Neil’s linked dipole has performed a good job on HF with only 5W. Unfortunately not so many chasers as expected.
Instead the VHF was a real deal for me, as Tom remarked in his comment. In YO is difficult to find such a great activity, including SOTA activators, right in the middle of the week. Tnx to all our chasers in both HF & VHF, I made quality QSO’s today.
Shining Tor will remain in my memory as an example of what SOTA really is.

It was a great pleasure to meet with Sorin, YO2SMB, a true gentleman and very experienced Sota Op. Also a pleasant surprise when Tom caught us up, and thanks to Tom who helped get the mast stabilised in the strong wind blowing across Shining Tor.
HF conditions where not great but we did get a S2S with SV2RUJ/P on SV/TL-019
As mentioned 2M saved the day, thanks to G7OEM/P, G3TQQ/p and M0JZT/P for the S2S contacts, and to all the others we worked.
So Thanks again Sorin for a great day on SP-004 and a new friend. 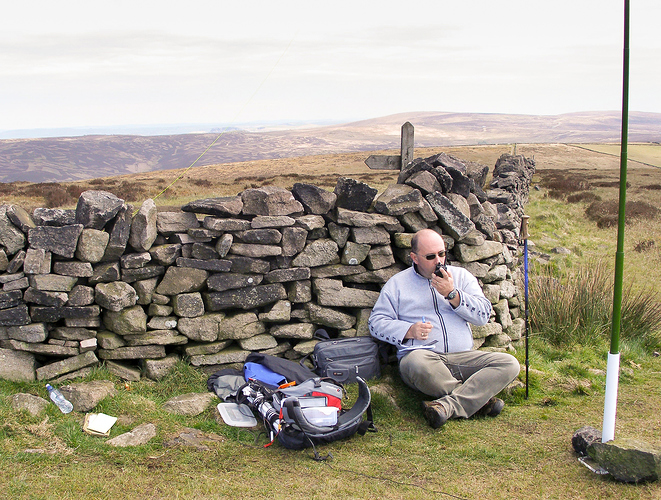 Finally back home with excellent memories after G/SP activation.
Here are my pictures: 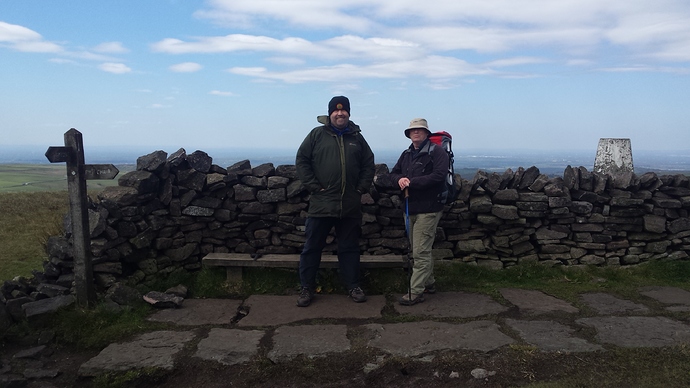 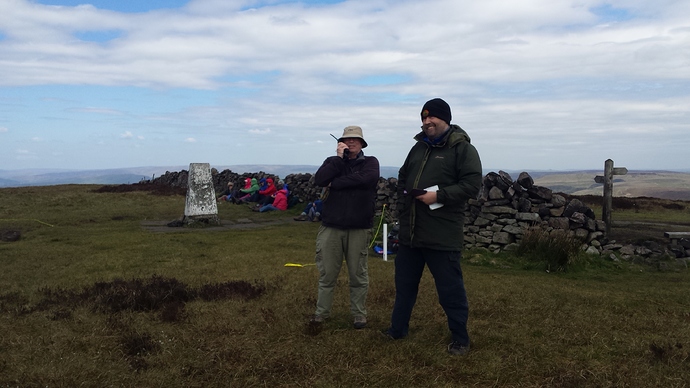 All my compassion goes to the victims of the Manchester attack and their families. Knowing now (after my visit in UK) the city and the people, I feel somehow touched myself, beside them, by the stupid agression of the terrorists against our children.
On the other side, congratulations for winining the Europa League Cup by Manchester United, hoping that a little dose of joy will compensate a great sadness after the attack.

Thank you, Sorin, you are a Good Man.
Best Wishes to You and Your Family. 73 de Paul M0CQE.