and opening the curtains I saw sunshine and not much movement of the trees. A quick look at the weather app revealed the forecast had improved overnight.
My good mate Chris M0KPW has been itching to do Whitfell again. I thought why not do it on the Fat Bike as it’s on my SOTA uniques list to do by bike. I hadn’t planned to take any kit and just crash in on four QSO’s using Chris’s kit.
But last minute I decided to take 23cm’s
My battery was not even charged (NOTE to oneself charge batteries as soon as I get home in future). I bung it on the USB charger in the Van and hoped for the best.

We got to the parking spot on the Corney Fell road and unlike Sunday when there was 11 cars there, we were the only ones, Hooray

Chris set off walking I caught him up on the bike, but soon the gradient steepened and it was not long before he over took me walking. By the time he got the Buckbarrow he waited to take an action shot of me, I carried on and just beat him to the summit.

First contact was Brian G4ZRP waiting for me and then Andrew G4VFL/P, I then worked GI6ATZ on SSB and was thinking, 3 contacts not bad, when Chris shouted out that he had just worked GW4ZPL and he wanted to try on 23cms.
So after a bit of Yagi waving we worked 5/3 each way. So there it is, my third SOTA on a bike and only the 2nd time I’ve qualified on 23cm’s, so a real result.

Hopefully we will be out tomorrow if the weather stays fine.

Chris made a nice little video of me on my Fat Bike today. 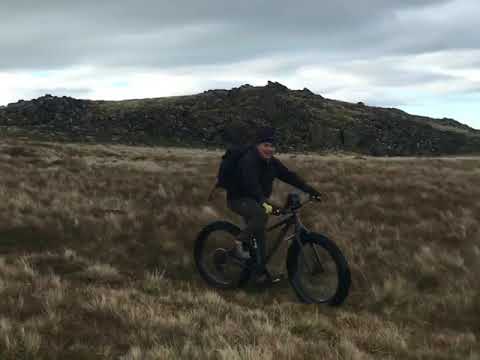 2nd time I’ve qualified on 23cm’s, so a real result

QSOs on any band are good. But there is something special when you qualify it on your chosen “oddball” band. I still annoyed we couldn’t work on 13cms last Sunday. I knew you were there but even a CW QSO would have be challenging. There’s always next time…

Yes, it’s not easy on the lesser used bands is it. But they say “Use them or Loose them” so I’m trying my little bit.
I’ve not done much on 13cm’s, but signals always appear to be S9 or nothing on that band, if you have LOS you can get good distances.
I might have to steal one of Andrews Fells to get you all next time. Or get much fitter and do a 10 pointer.
As you say “Next Time”

I did take a listen for you this morning Nick, but it’s not a good path from my QTH (Winter Hill is in the way!) - although in the past I’ve worked several LD stations in 23cm UKACs via reflections off large buildings on a ridge to the South of me.
However whilst beaming South I could hear Phil G3TCU calling you (from Surrey) a number of times between 11:30 and 12:00 BST.
73 de Ross G6GVI

We will get a QSO eventually, that Pesky Winter Hill has a lot to answer for.

I’ll pass that info on to Phil.