Last GM summit (for a while)

Today we activated Ben Nevis and this is our last planned SOTA summit for this trip. We tried to choose the best bands for the prevailing propagation which tended to be 20 or 40 metres.

Both Carolyn and I would like to thank everyone for their support and QSOs; it has been a lot of fun. Sorry to all those we missed either due to poor band conditions or the inclement weather we suffered at the beginning of the trip.

Hopefully reports will pop up in various locations but bare with us as there is a lot to write about!

Many Thanks for all the uniques!

A Big thank you to both of you for activating some very remote summits on your GM tour, & congratulations for the first activation of GM/SI-210 Noss Head!
I was monitoring your alerted frequencies for that one & when you were spotted on 20m I listened, but at my location you were at best, just above my noise level. I listened patiently on your alerted 40m frequency for some time, but I had to go out, so I will never know if I could have worked you on any of the other bands you used, although the chances are, that I could have.

I was up quite early on Saturday & had already done some serious pruning of some overgrown bushes & shrubs in my small back garden & the reason I had to go out, was that I had an “appointment” with the local DIY emporium, as I needed some more heavy duty hardware to enable a DXpedition to the far end of my HF wire antenna.HI! When I put it up over 15 years ago the far end was easily accessible, but over the years a large conifer & a privet hedge had grown around it, making any adjustments or tweaking a bit of a jungle type experience!

After lots of fun on Sunday morning with a new cordless hedge trimmer & some “Large Loppers”, I finally reached the far end of my wire antenna & at last had somewhere in my garden I could sit in that has Sun all day long at this time of year.This also meant I could properly experiment with feeding my aerial from the garden, as opposed to from my normal indoor “shack”.

I set myself up with my FT897 powered from a car battery, the indoor end of my aerial disconnected, & a counterpoise wire on the ground to tune against. I also erected a 2m J-Pole for local QSO’s. I called in on the “after news net” on 5MHz & was very glad to hear that my signals were as normal, on what was at that time a very changeable band.

After several very relaxed QSO’s on different bands in the sunshine, it started to rain. It wasn’t heavy rain, but after the downpour we had here on Saturday I wasn’t going to take any chances, so I quickly disconnected my gear & retreated to my kitchen. The rain didn’t last long & while debating whether to abandon the garden & retreat to the “shack” I saw that Robin GM7PKT/P had been spotted on GM/WS-323 so I quickly set up in the garden again & after first thinking I’d missed him, he called again & I managed to work him.

Thanks for calling again Robin

Robin then QSY’d to 40m, & a short time later while sorting something out in the kitchen I heard Carolyn’s dulcet tones asking if Robin was still on frequency. There was no response to her call, so I called her & said that Robin was now on 40m. After a quick dash to my kitchen, where I had left my netbook, I gave Carolyn Robin’s frequency on 40m. After very kindly working me she QSY’d to 40m & tried to work Robin but conditions were not right for the distance unfortunately. I had no idea where GM/SI-171 was, other than it was somewhere on a Scottish island, imagine my surprise when I found out later that it was also another Shetland Isles summit, & had only been activated once before, by Paul GM4MD/P back in 2007!

As only 4 QSO’s were listed against Paul’s activation, my little call in to help Carolyn out was still only QSO number 5, for GM/SI-171 Ward of Scousburgh

Although local conditions weren’t good on 60m at the time, I was very glad to hear many other stations working Carolyn after I had posted a spot, so I hope it was another successful activation

Although my “shack” is air conditioned & quite comfortable even in the hottest & most humid of weather, there is nothing quite like being out in the fresh air!

I took a couple of photos of my new “Summer” operating position at the end of my garden, which is where I was when I worked Robin & Carolyn on Sunday. For those who haven’t tried it, setting up outside really is great fun, even if it’s only in your garden

Not a very flattering photo, but here is one of me in my garden. 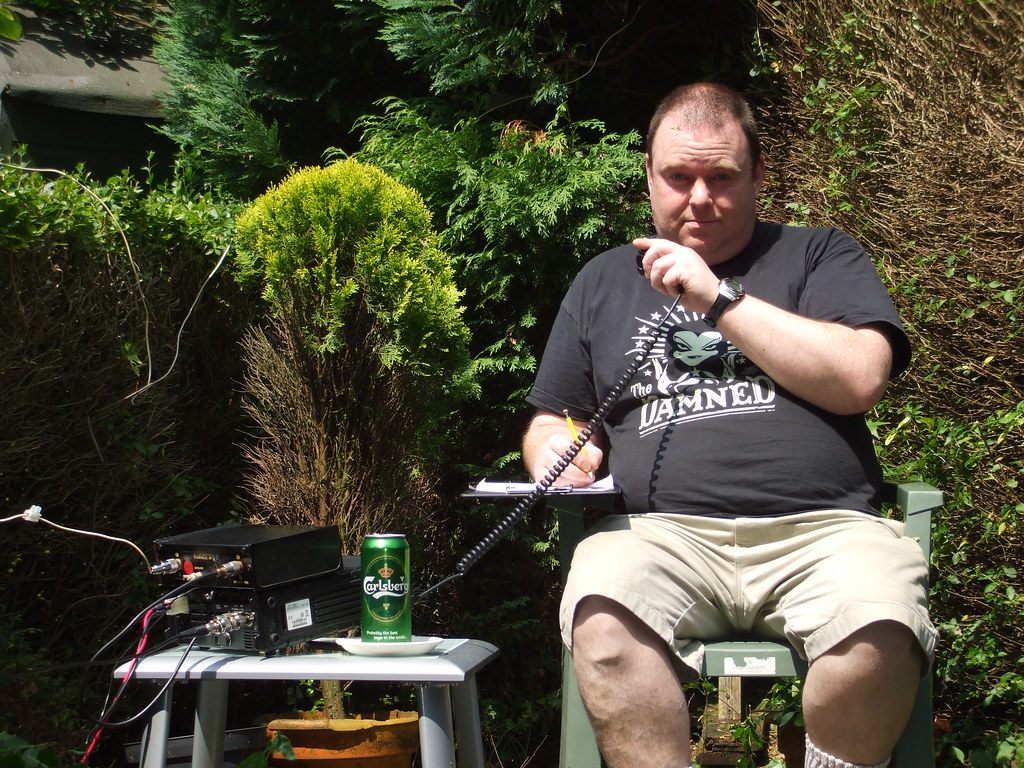 And this was the view from my operating position. For the eagle eyed amongst you, I am not deriving some new form of “Bio-energy” from the pile of leaves, there is actually a car battery under the table 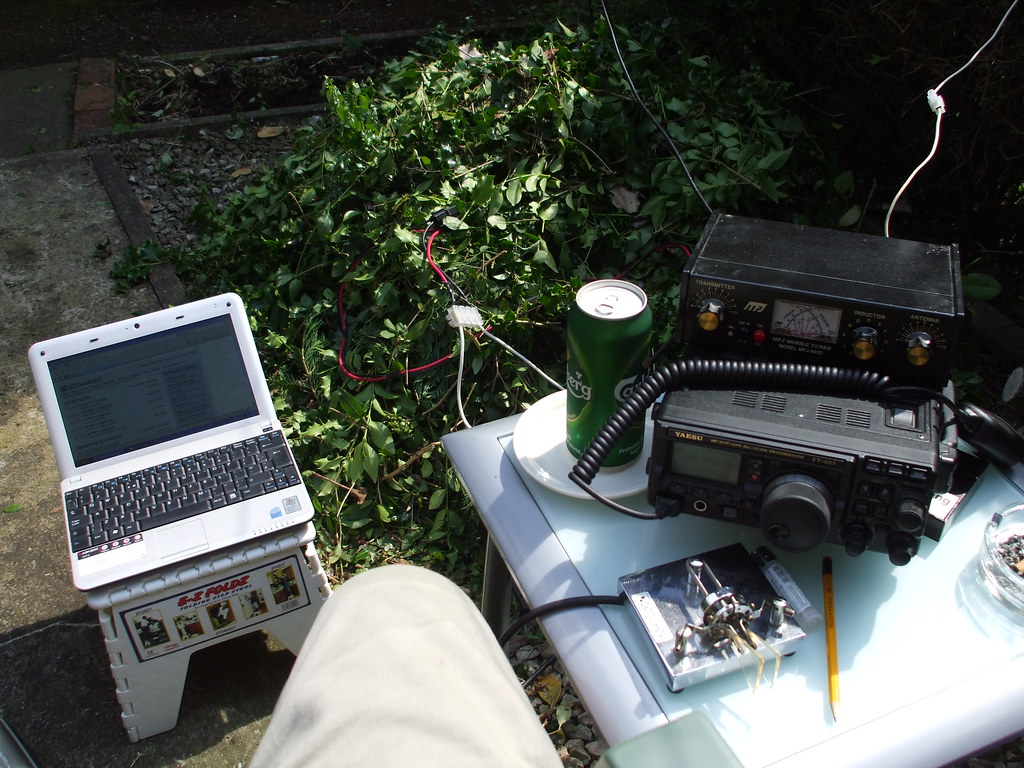 Once again, a huge Thank You, & Congratulations to both Helen & Carolyn.

Well done H and C. A truly magnificent effort! I only managed to catch C on three summits due to other commitments, but kept an eye on your progress. You have done the summits real justice by your very intelligent choice of bands. Excellent stuff!

I hope you had a super time, Carolyn and Helen and thanks for all those new sota’s and wab squares.

Hope you had a good time in GM. Thanks for all the uniques in the Orkneys and the Shetlands. It always took a long time until my call was answered. Usually I kept on calling Carolyn GM6WRW/P, but no reponse at all (except for one) and then Helen MM0YHB/P took over the frequency and I managed to easilly work after she had a few QSO’s. There was lots for QRM and QSB at my QTH on the radio.

Thanks for the opportunity to work some new ones, well done.
I would have loved to have been able to work you on all the summits but work and occasional errands meant I missed a few precious ones and once or twice the propagation let me down. Ten out of ten for effort, I am glad I am not typing all those contacts into the database and look forward to a good read when have time to do any reports.

Hopefully I can return the favour a little with some rare ones on my Scottish foray in August.

In reply to M0YHB:Thank you for making this huge effort and enduring some very soggy days without a summit tent.
I enjoyed the challenge of getting through with my 5W - sometimes straightaway like yesterday to Carolyn on Ben Nevis, sometimes last of all when the swamp had emptied of alligators or after the stronger signals of good operators had ended and finally there are 13 points in my SWL log when it wasn’t possible but one or both of you were clearly audible.
I want to go to the Northern Isles for the British Cycle Quest one day so can see the need for a radio trailer behind the tandem!
73’s
David Holman 2E0DAI