Thanks to all the stations that have made an effort in the past to promote the best band and mode in ham radio circles. 2 metre SSB Horizontal Polarisation!!!

Hi Don, nice to hear from you. I still remember working you a little South of Birmingham quite easily from Hohe Acht DM/RP-001 on a very flat 2m ssb. Just proves what can be achieved when 2 stations point their beams at each other. May catch you from GM/SS next month.

Thanks for a superb article and for organizing last year’s event.
A great pity I cannot attend this year due to a pre booked holiday.
However, I may take some radios with me and join in the fun chasing.
Best wishes
Dave

Looking forward to this activity but is there any chance that the 2 meter FM rubber duck brigade will not rule?

The handheld-rubber duck approach has lots going for it, and in my opinion we should avoid “talking it down”.

Activators embarking on a strenuous multi-summit round in G/LD will want to minimise pack weight and volume, and so a handheld + RD is perfect, especially with lots of like-minded SOTA people taking part in the event and in those valleys, on those hiking routes or on other summits. HH+RD is therefore pretty-well perfect, and furthermore is the most considerate low-impact option on popular/busy summits on a summer weekend.

I am so impressed with my Yaesu FT70D, as you may have read. I would be highly confident of doing much better with it than just valley bottom contacts - even with just the rubber duck.

I’m sure plenty of participants in this event will utilise beam antennas and/or use HF / 2m SSB etc but anyone that chooses to take part HH+RD style would have my full support as it is the ideal approach in so many ways.

2m FM is a low price and low weight option, so it is by definition very inclusive. The Lake District, being a fairly compact area is very compatible with the range afforded by this band/mode.

Having said that, one of the things I was most struck by for the 2019 event was the variety of bands and modes used.

I am very happy that you are suggesting modes and bands that will be monitored during the event. I suspect there will be some more 6m and 4m activity this time round as well, given recent conversations.

2.3GHz is worth considering. Buy the SG-Labs transverter (£200) and use the provided PCB antenna. It will work with a HH for FM, you don’t have to use SSB. True SOTA kit, you don’t get far in the valleys !

When back at the home QTH you now have to core of a QO-100 station. With a Satellite dish just add a patch antenna, a LNB and RTL-SDR dongle to work 1/3 of the globe, however you will need SSB for this.

The SG-Lab 23cms transverter is a steal. One of those at about £160 and whatever you are using for 2m gives you the same modes on 23cms at 2W. It is a significantly better buy at that price to give all modes 23cms than a used Alinco DJ-G7 that gives triband FM with just 1W on 23cms.

2m FM is a low price and low weight option

Viki @M6BWA has been championing 70cm for some years, and each time we have worked S2S, it has almost always followed an initial contact on 2m.
Reports exchanged have usually been better on 70cm than on 2m, when using a hand held and rubber duck setup.
I suspect that this is mainly because the antenna is more efficient on 70cm, and is also higher above ground (in terms of wavelength).

Most HHs these days are at least dual band 2m / 70cm, but 70cm doesn’t seem to have caught on in popularity - maybe the Flavours challenge in July will give it a boost…

I agree 100% with everything you have said Adrian - we should definitely do more 70cms and it has always been a pleasure to work @M6BWA on 70cms, even more so because of her BBC-perfect accent and wicked sense of humour

My limited experience of 70cms is that it often works better than 2m when bending round mountains, but I have no solid evidence to support that theory!

It should be pointed out as well that Julian G4ILO (SK), founder of the very successful WOTA scheme, was a keen supporter of VHF handheld-style activating in the Lakes, for the reasons I gave above.

As stated, I’m sure a good variety of band, modes and working conditions will be in play, but it should be recognised that HT operating is highly suitable for going portable in G/LD.

Reports exchanged have usually been better on 70cm than on 2m, when using a hand held and rubber duck setup.
I suspect that this is mainly because the antenna is more efficient on 70cm, and is also higher above ground (in terms of wavelength).

Hi Adrian, does the data support that? I guess Viki could tell us.

I would have thought the increased free-space attenuation at 70cm would more than counter those factors. My limited anecdotal experience of working a station on 2m shortly followed by 70cm is that reports are usually not as good.

However, I’m nearly always 70cm QRV so would also be happy to see more activity on that band.

Hi Adrian, does the data support that? I guess Viki could tell us.

I would have thought the increased free-space attenuation at 70cm would more than counter those factors. My limited anecdotal experience of working a station on 2m shortly followed by 70cm is that reports are usually not as good.

Just an impression from my experience, which is of course nothing like as extensive as Viki’s! Most of our contacts will have been in and around GW and G/WB, so up to 100Km ish, and many a good deal less.

I’m sure you are right that other factors come into play, I suppose as the path length increases, then the greater free space loss will tend to become the dominant factor.

Worth considering, though, especially if a radio has dual watch (can monitor both bands at the same time) and already has a dual band antenna…

2019 Lake District SOTA Weekend is in the latest edition of RADCOM!

Excellent article Mark and good to see some familiar faces

Will try to get along this year, though life is a bit unpredictable at the moment…

and wicked sense of humour

Thanks for putting that article in Radcom Mark, all good publicity.
I hope to take part this year from a base in Langdale.

Viki @M6BWA has been championing 70cm for some years, and each time we have worked S2S, it has almost always followed an initial contact on 2m.
Reports exchanged have usually been better on 70cm than on 2m, when using a hand held and rubber duck setup.

Yes, I have indeed been working summits on 70cm fm for many years now and would particularly like to thank fellow activators who inwardly wince when they hear ‘any chance of 70cms, please?’ as they often have a pile-up/ haven’t yet qualified/are cold and wet and want to scarper (sometimes all three!) but grit their teeth and reply ‘shall we try now?’ and off we go straight to, usually, 433.475. From my point of view this is marvellous as it not only gives me, usually, the s2s but alerts all his queue (and mine) that I am going to 70cm and I can often qualify my summit on the chasers that follow us down. Job done!

Giving a quantitative answer on the relative excellence of 2m and 70cm signals would take some time to discover but looking at s2s (I think the answer may be different for summit to shack) contacts recently the most common reason for lack of 70cm s2s after a successful 2m contact is that the activator doesn’t have a suitable radio with him (or aerial) as not everyone carries a handy as a back-up or he/she is too busy with other bands to spare the time - very sensible reasons. Sometimes it can be that they don’t believe a grotty h/h and rubber duck will actually make the contact - but it sometimes does! (The same applies to chasers who grabby the handy and rush into the garden and are confounded when we exchange 59s over considerable distances.)

One contact I was suprised by was from GW/SW-011 the Sugar Loaf near Abergavenny to G6BPC Nick in Stroud with 2m 58/58 and we both doubted that 70cm would work until 54/54 was exchanged! 70cm likes travelling over the sea so GW/SW-014 near Brynmawr to G4KPM in Portishead was 52/51 (OK 2m was 59/59 but i don’t know if Malcolm was using the same power on both bands). Mine is 5w into a dipole from a VX7R - and i don’t always manage to get 4 contacts on 70cm, especially during the week and on a small hill and I am often helped, as mentioned, by other activators especially during the winter season!

Excellent work Viki, an incentive to the rest of us 70cm-enabled folk to try that band more often.

I’m not surprised, the 130km path for our 70cm S2S hugs the coastline with little high ground in between. I regularly get contacts into north Wales from Arnside Knott (my ‘local’ and near-daily dog walk) and other summits (even modest Wainwrights) on the south side of the Lake District, albeit on 2m. Not only S2S but summit-to-shack, Steve MW0ISC at his QTH near Mold being a regular chaser.

I was more impressed by our recent 2m/70cm contact, me at home near Arnside (collinear ~30m ASL) but you to the north behind ~35km of LD hills. That’s the fascinating aspect of point-to-point VHF/UHF comms in a mountainous area: if one or both of you has great line-of-sight (due to height) or exploits some handy reflection, that gets through despite the odds.

Keep up the good work.

The other factor is that tropo enhancements are more frequent on 70cms than they are on 2m, and for me in Brum it only takes a small lift for the near continent to come up. Also if you dump the rubber duck, an antenna with gain is a lot more compact on 70cms than it is on 2m. A simple two element HB9CV can be packed assembled and used handheld and IIRC gives 3.5dB gain, but on a roach pole a 7 element ZL special gives 11.5 dB of gain and is only 70 cms long so it could be strapped on the back of a rucksack. Ordinarily a simple handheld and its basic antenna may be adequate for activations but for the 70cm “flavour” the more stations that you work, the bigger the multiplier.

handheld & rubber duck at both ends 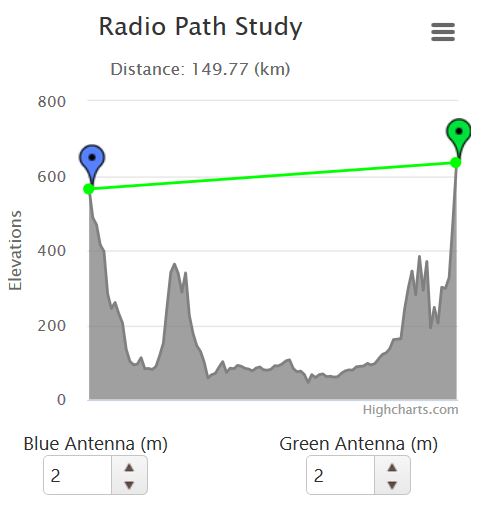 Yes I agree the contact is not “remarkable”, nor even surprising. (I’ve worked many times HT2HT into GW/SW from The Cloud G/SP-015).

I’d agree with your assessment Andy @MM0FMF and place it in the “hugely satisfying” category.