This was my second visit to Ladylea and I used exactly the same route up as described in my previous report: Ladylea Hill GM/ES-049

WX was cloudy with a stiff breeze from the SE and the summit has no sheltered areas at all - the cairn is about knee high, so I used my tent for the first time in a while. While providing good shelter, its pretty noisy, so for future windy activations I will try a lightweight tarp I think. 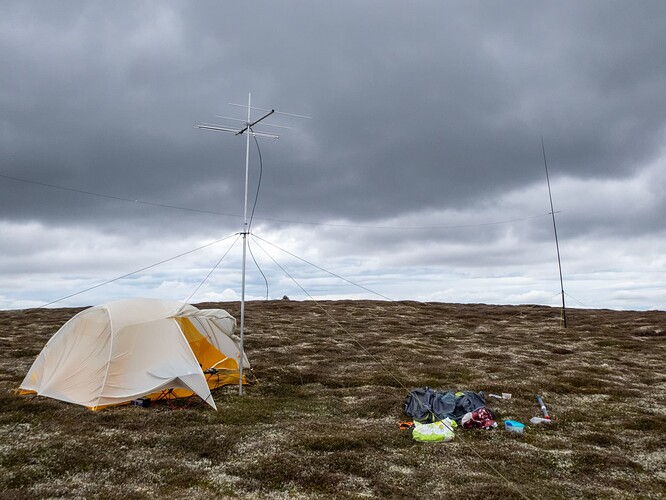 I went for an early-ish start, hoping for some VK/ZL on 20m and set up my delta loop first. No DX materialised though - I did hear VK being worked but signals were not very strong. Chris, F4WBN , was first in the log at 0712z, followed by 24 more EU including a S2S with OE6TTF/P.
My tent then blew in on me and I discovered I had oriented it with the wrong end to the wind - Doh!
The enforced break to turn it round was interesting, as the wind was a steady 20-30mph. I also took the opportunity to set up my end-fed.
Back on 20m a hour later, I chased a couple of Italian S2S and then heard Manuel EA2DT request a QSY, which I did and as the frequency was clear,put out a spot after completeing with Manuel and also F4IFZ who had followed us up. Another 20-odd EU in the log including 7 S2S and LX1FF.

I then tried 40m and this was easily the worst 40m result I’ve yet had. The band was full of German contesters but although I found a clear spot, it resulted in a grand total of 3 UK QSOs and that after quite a few CQs.
Back to 20m I chased a few more summits, including GM5AIB/P on GM/ES-035 Mount Blair for a Complete.
Swapped the 20m loop for 17m and had a very good run of 39, including UA7D who was my furthest East of the day, plus 4 more S2S.
15m was open to JA so I tried a spot and Gavin, GM0GAV/P on GM/ES-059, Kerloch, just under 30 miles away, was first in the log

. Only one more EU after several CQs, and then I saw a spot for Andrew OE/VK1AD/P on 20m, so did a quick QSY for a S2S using my end-fed this time. 15m then brought just 2 more EU contacts.
Nothing heard on 12 or 10m.
Took a short break to put my new 2m yagi together and raise the mast and was rewarded by hearing some activity for a change - backpackers contest. First in the log was G8T down in JO01kj Sheppey, at 698Km ODX on 2m for the day. I then put out a spot but CQs brought no chasers, just contesters, so I gave out a few points. Another spot and CQs - again no chasers, so I went looking for more contest stations. Worked 9 in all, with one incomplete. I then worked Fraser MM0EFI/P on GM/ES-027 on 2m FM to the West of me. 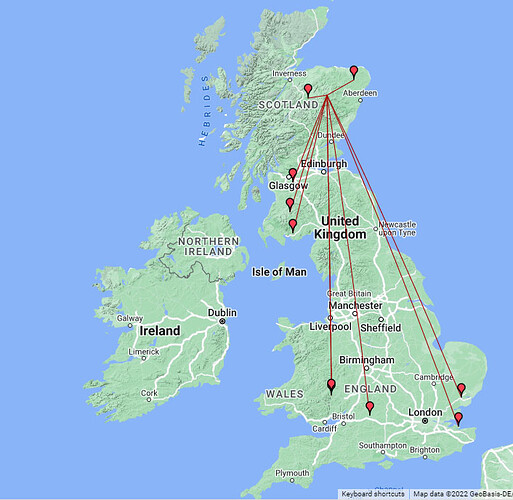 As 2m activity dropped away, I returned to 15m and was rewarded with best DX of the day in a chase from FY5KE, followed by another 10 EU including a S2S with 9A8RA/P.
Called it a day and packed up in sunshine at 1400z, although still breezy. 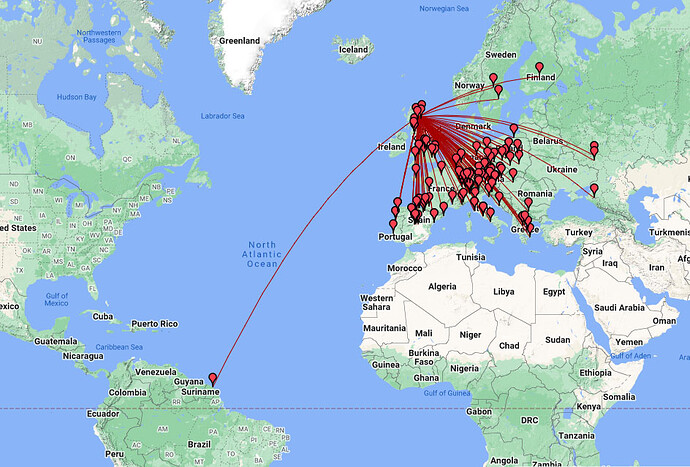 Didn’t hear a single US station all day.

The only US station I heard had retired to Bali, Indonesia! Lots of Indian Ocean juicy stuff on 15m. Thank you for the QSO on 2m, that gave us 87 square and AB multipliers.

My tent then blew in on me…

It was definitely breezy at times. With you on GM/ES-049, Gavin on GM/ES-059, Fraser on GM/ES-027 and GM5AIB on GM/ES-035, I was optimistic of some local S2S activity as I reached the summit of Coiliochbhar GM/ES-060 at 10.00Z.
Note to self - remember to take all the bits one needs for an activation. Don’t leave vital pieces in the shack after post-holiday unpacking. Result: “Nul Points!”

Thank you for the QSO on 2m

I guess that was GM3HAM/P?

remember to take all the bits

Bad luck. I used to make a packing list. Now I just tend to leave everything in my rucksack apart from the battery and dirty washing.

Now I just tend to leave everything in my rucksack