If there’s one thing that Mo and I learned during the last lockdown, it’s that there is plenty of adventure to be found near home. Here’s one…

Today I had the morning free and thought I’d mop up one of the local 2 pointers that I’d been shamelessly holding back until winter bonus season.

Simon @GM4JXP was up here in April and wrote an excellent report on here.

My report is more to show the contrast of a winter activation.

I left home at 0800 and headed over to Strathdon and turned right up the Glenbuchet road - one which I’ve never been on. It’s single track and this morning it was covered in ice and snow.

0820 saw me parked up and on my way, not sure what I’d find, as the first part of the walk is through forest plantation, and lots of forest plantation is lying on its side around these parts, thanks to Storm Arwen. 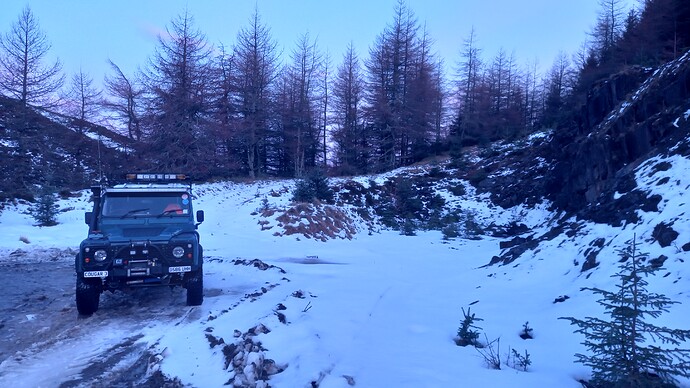 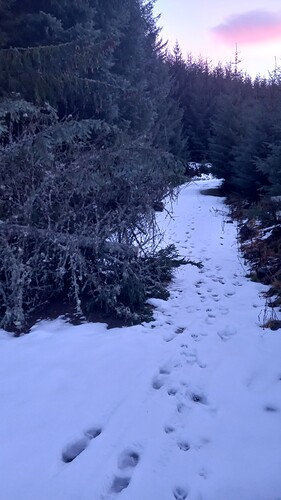 Thankfully the tree almost blocking the start of the path was the only windblown tree I saw all day.

Further on, I was looking for a steeper track or path heading up to the right. And missed it. Backtracking a couple of hundred metres I saw what I thought Simon had marked on his map. It didn’t fill me with enthusiasm. 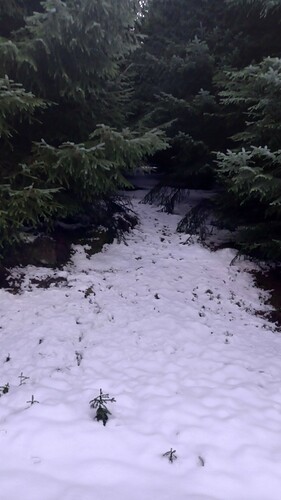 For the next 250m, I plodded up the path/gap in the trees. The only other tracks were that of a deer. Nearer the top, the trees closed right in around me and I had to push my way through the branches, getting a soaking from the snow and ice that was shaken loose by my passage. At least it cooled me down.

Eventually I was out of the trees and was presented with a new obstacle. A deer fence. 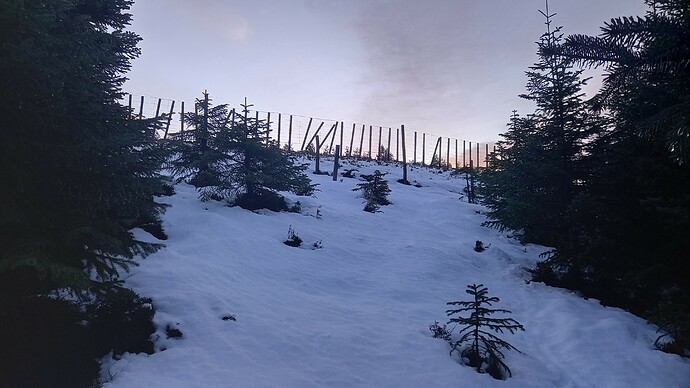 Mercifully, a section of the fence had the bottom pushed out and I was able to scramble under.

The slopes from here and almost to the summit were planted out with young conifers. I found a way through them, never finding a path or trail but eventually coming upon clearer slopes for the final 200m. Here, snow fields were interspersed with short heather banks. The snow had a crust, but wouldn’t support my weight. In places it was 30cm deep.

All of that was soon forgotten. 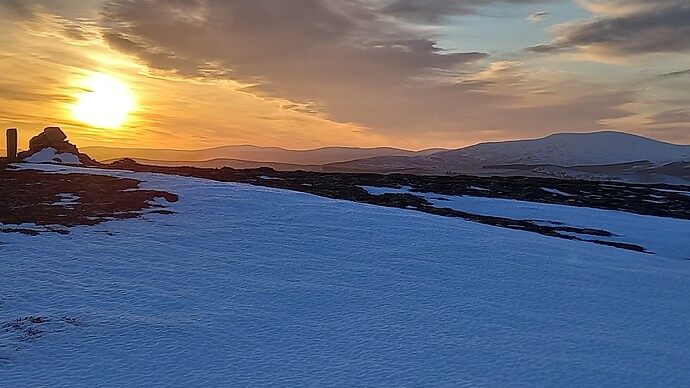 The cairn was rather miniscule, however there was no breeze. Temperature 0°C.

I was on the air just after 0915z, wondering if I was too early for the Chasers.

Seemingly not! 40m yielded 10 stations in 10 mins. 60m and 20m, just three on each band. 40m was certainly in good nick, with several Spanish stations making the log. There was QSB on 20m. I’m surprised I didn’t make more contacts on 60m and I did percivere for a while, which is unlike me. 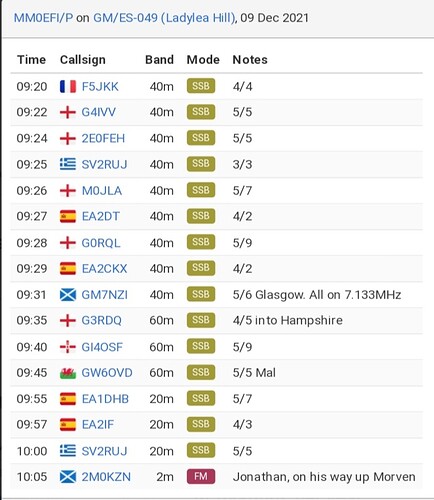 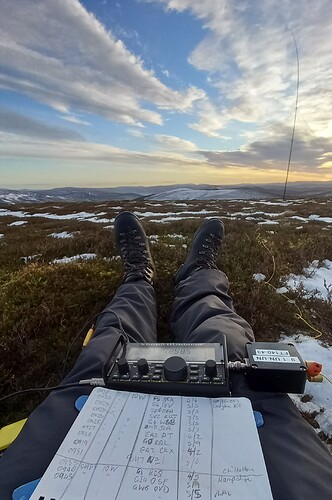 I was aware that my phone had pinged a few moments ago. It was a message from Jonathan 2M0KZM. He was half way up Morven GM/ES-018, my local hill. I spoke with him on 2m and then spotted for 2m, calling regularly on 2m for the next 20 mins as I broke the HF station down. No responses. Standard for these parts.

I hoped that Jonathan would make the top before I had to depart, so I hung around for 20 mins. I think he’d underestimated the number of false summits on Morven though!

Eventually, at 1030, I set off down towards the plantation, attempting to follow my footsteps in the snow. Never a reliable method!

Eventually, the gap in the fence was found and I scrambled through and back into the gloom of the plantation. It’s always easier going downhill. I still got wet though. 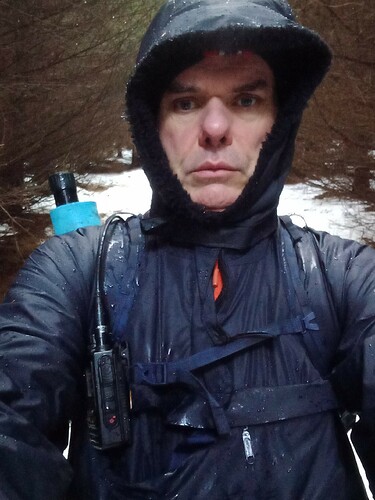 I was back at the 110 soon enough. The first thing I did was turn on the ftm-400. Not long after, I had a call from Jonathan on 2m. He was at the top of Morven. So, in the end he chased me and I chased him, no S2S but at least a Complete for me.

I couldn’t help thinking that I’d gone the wrong way today. It was only when I viewed my Strava track against a terrain map that I could see track marks elsewhere, but who knows? With recent planting and a covering of snow, it was pretty impossible to see any trails. 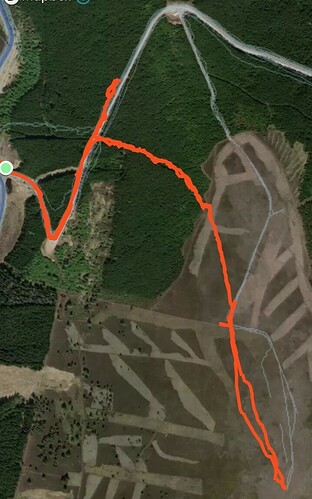 Fraser, I owe you a couple of beers (at least). Looking back at my report after reading yours, I have realised that I uploaded the wrong route map

My actual route on the day was up the wide track that goes uphill from the big right-hand bend at the top of your map. Where that comes out of the trees there is a big gate with a stile beside it to get over the deer fence. Not far along the track on the open moor there is the big cairn which I picture in my report and which can clearly be seen on the Google maps satellite image. If I can still edit my old report I will change the map. I’m really sorry that you had an unpleasant route up due to my error.
Simon

I’m really sorry that you had an unpleasant route up due to my error.

You’re seriously on the naughty step Simon! If and when we do a joint activation, I’m not going to help you carry your antenna farm up a hill.

However, offers of beer will probably help me forget your indiscretion.

The number of times these guys (and F4WBN, F5JKK, G0RQL) have got me out of a hole is incredible. When I did the three Cairngorm big ones and was sat holed up in the bothy bag in dire WX on the final summit, I scraped the 10 points with 4 contacts. Yes, you guessed it…

Thanks Geoff. I’m hoping to sneak in another couple before Christmas, WX dependant.

I have to take Mo to Ballater Saturday evening. Thinking of nipping up Craigendarroch GM/ES-078, as it’s literally in the town. Also to see if I can extend the Chasers day! Then back down to pick up a wine-infused wife…