Ladies and Gentlemen, prepare for fun on HF.

Today I worked Don @G0RQL for the first time on 10m.

Today I worked Don @G0RQL for the first time on 10m

Tell me when you’ve worked Don on 2m. Then I’ll be impressed.

Tell me when you’ve worked Don on 2m.

Given a good 2m Es opening in the right direction that could happen any year!

Anyway, returning to topic, NASA now forecasts a maximum SN of 134.6 in October 2024, (see https://www.nasa.gov/msfcsolar ) but looking at current data that might be a little conservative. Of course the sun could decide its being too enthusiastic and cut back a little, or it could go for broke and give us another 1957 (I was an SWL then, SA on 15m AM booming in all afternoon and evening on the house BC receiver!)

A taste from the big solar maximum

From “The Month on the Air” RSGB Bulletin January 1958 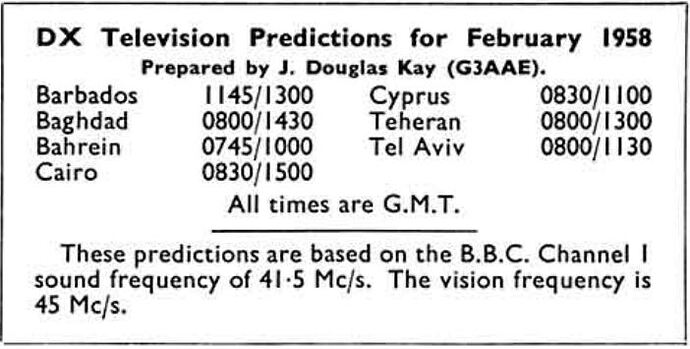 From “The Month on the Air” RSGB Bulletin March 1958 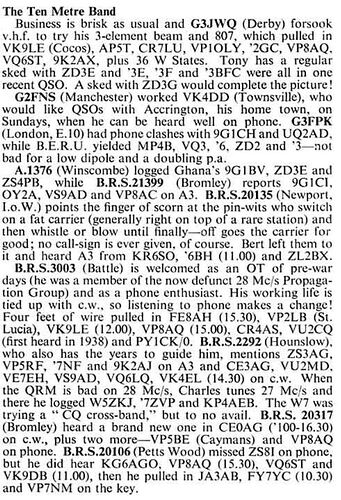 For some context, those 10m reports will have been performed on typical valve receiver designs that are 65-70 years old. If you look at many receivers used in the 50s, they were noticeably deaf compared to any modern receiver of the last 20 years.

I love the term “pin-wits” - we have all met one 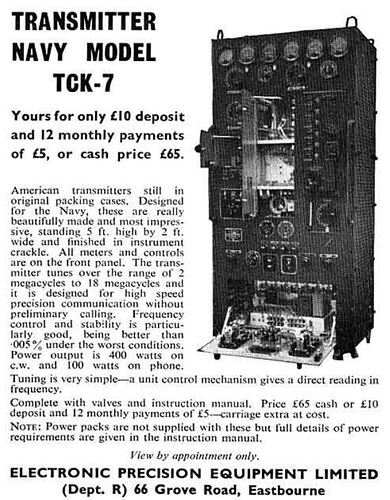 For some context, those 10m reports will have been performed on typical valve receiver designs that are 65-70 years old. If you look at many receivers used in the 50s, they were noticeably deaf compared to any modern receiver of the last 20 years.

I can’t remember now what the Eddystone Rx was that I got 2nd hand, back in the 60’s, I think it was an early 740, it had the curved, not the sliderule dial, probably built in 1950 near the start of the production run. Anyway, the point is that it was sensitive enough on 10m to pick up background noise when the antenna was plugged in, and that is all the sensitivity that you need (bearing in mind that the electronic hubbub that haunts us now was well in the future back then.) I wish I still had it, it was a work of art!

Instruction manual for the 710 is on Ebay, but the actual receivers on that site are all slide rule dial.

Edit: Which radio would you like? Well the obvious answer is both

You missed my point, which was that if the Rx is sensitive enough to hear the background noise then the background becomes the limiting factor, not the sensitivity. At the time those receivers were in use, the modes being used (AM, SSB and CW) were not capable of being used at signal levels below the noise, unlike the plethora of digital modes today.

Congratulations, Paula!
JG0AWE will call on 40 sometimes around 1430Z so add his call to your mental Rolodex.
73, David N6AN

The way 10M has been performing so well lately think it would be good idea to modify all my SOTA aerials to give 10M capability.

The addition of the solar data to the SOTLAS header is a nice touch as well, thanks Manuel.

Not yet seen on iPadOS

As others may have noticed, the solar info in the SOTLAS header is now also displayed on the iPad and iPhone.
Thanks Manuel@HB9DQM.

And when you click on this solar data, the monthly SN and SFI history appears. This small detail is also typical SOTLAS, hi.

Manuel, sotl.as is just too good. You are spoiling us now.