The device is rated for 10W

oops thanks Joe I’d missed that too :-s

Ed, Can’t see any reason why with the correct inductances the antenna wouldn’t work (or at least “tune up”!) on 60 too but wonder whether you might lose out on NVIS due to lower angle radiation? Or maybe DX is your goal

In principal this same antenna loading board can be used on a vertical or horizontal 1/4 wave whip, so the same PCB could be attached to a wire running horizontal to get NVIS if required.

Yes, but no mode is stated. 10 watts of RTTY, digital or even CW is going to be more of a load than SSB for example, so my 20w assumption was based on 20w PEP SSB. Looking at the components, I would say it should easily handle 20w PEP SSB. I’ll see when I get it and get it built.

It’s surprising how easy it is to miss stuff. I saw people questioning the power and thought “it’s there in black and white, 10W!!!”. The radiator length is clearly given as 17ft (5.18m in new money) but nowhere do they give the radial lengths. Bah! Useless docs! Well on the 5th reading I found it. I thought I was going mad till then.

It’s surprising how easy it is to miss stuff.

Undoubtedly OK in this case, even with the small switches but generally care needed in such scaling - if the limiting factor is core dissipation, a reasonable assumption but if it’s peak voltage (or less likely peak current) you could end up with problems…

…and if so at what angle they should slope down at. Or how about using two of the units back to back to make a shortened dipole :-s

Aren’t antennas fun! yes we can talk about elevated radials and whether the feed should be part way up the mast but this design is for the board to sit at the bottom of the mast and hence the radials get laid out across the ground. That’s not to say it couldn’t be mounted further up the mast with it’s “Hi-Tech” mounting system (2 rubber bands).

The PDF does say “Use four 10’ counterpoise/ground wires attached to the ground wingnut” - so 10 foot radial wires. But I think you found that. How can this document be so “invisible” in places - that’s at least three of us that have missed things that are in the document, in black on white! Crazy.

My idea would be to cut radials to different lengths for each band the antenna works on, (three in this case) then tape them together for convenience and lay out the “bundle” in the opposite direction from where I hope to get contacts from.

The constructive contribution from my side concerns the solution of the band-switching by means of only 1 switch. 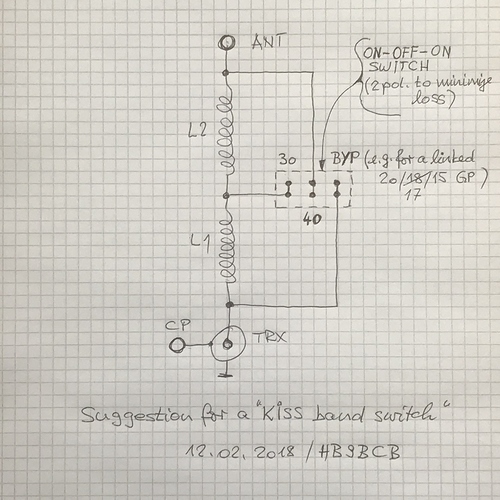 one problem I always had with my vertical antenna prototypes is that the SWR varies significantly with the type of ground and the deployment. This might not be a problem for KX2/KX3 users with an integrated ATU, but for my MTRs, it is.

So far, I mostly used 1-2 elevated radials, sloping loosely from the feedpoint ca. 80 cm above ground. Tuned in my yard, it worked well on rocky summits. But on Texel island in PA land, it did not match without an ATU.

I used elevated radials for they are said to be way more efficient. Now I see that this new design uses relatively short ground radials.

The unreliability wrt SWR depending on the installation has reduced my interest in loaded verticals, despite the big advantages in terms of deployment on small summits.

Can anybody comment on whether the ground radials approach, taken in this new antenna, is less dependent on the type of soil?

BTW, my last approach was to make an Elecraft T1 integral part of the vertical SOTA antenna, based on the respective mount released as a 3D printable design.. The downside of this is that

What I am considering now is using a 12 step rotary switch and respective taps on the coils instead of two slide switches that shorten the entire coils, so that

This will be a bit bulkier than the 2-slide-switch design, but way more flexible and more robust that a T1.

PS: I might add a common-mode choke and a Dan Tayloe, N7VE SWR indicator to the design.

My vertical is similar to yours (Buddistick clone). The SWR is adjusted by altering the length of the single elevated radialpoise (is it a radial or a counterpoise?) The length is longer than needed for wet, boggy Scottish summits. From experience on a few hundred summits using it, I know whether the radialpoise needs to be shortened somewhat. For summits that are dry and volcanic (Madeira, Canary Isles) it needs shortening by about 10cms over the Scottish length. Gets the indicated SWR on an 817 back down to 0-2 blobs.

I am using a copy of Andy’s vertical. The “radialpoise” (lovely name!) is on a seperate winder, the wire is marked with red tape at the tuning points, and when necessary I adjust the tuning by changing the length that is unwound. This quickly results in a good match every time I deploy it. Last time I used it on 20m SSB my third call was from the USA so it seems to work well.

Nice setup Rex. I just ordered one myself. A 40m vert is super appealing to me for sure.

Two questions about your setup with it:

Yeah, I’ve got the four 10-foot radials laid on the ground. On the type of ground in my back yard (and on this summit) the SWR is very good across all three bands. In tweaking my build, I did find I had to reduce the number of turns on the 40m inductor.

I am curious to see how the SWR does on more Rocky and volcanic summits, but I haven’t yet figured out whether I want to carry the necessary equiment to the top of one of those.

Sorry, didn’t answer both questions. My coax feed is approximately 15 feet. I’ve got about 8 turns of the coax going through an FT240 core at the moment—not very weight conscious, but it seemed I was getting some common mode currents messing with my keyer when I was testing, so I kept it on for now.

Hi, in my design, I integrated a small common-mode choke, made from an FT50-43 with 11 turns of twisted magnet wire. This is tiny and has reduced the variation in SWR due to deployment of the radialpoise/counterradial, however you name it.

in my design, I integrated a small common-mode choke, made from an FT50-43 with 11 turns

Its a nice simple solution to get a 3 band vertical, using Heinz’s 2 pole on-off-on switch is a good idea. You could also extend the radiator to 6m long matching common travel poles, to give more efficiency on 30m & 40m.

In Heinz’s drawing you would add a RF capacitor between TRX and BYP pole, probably around 43pF.
Then reduce L1 to around 2uH and L2 9uH

es, but no mode is stated. 10 watts of RTTY, digital or even CW is going to be more of a load than SSB for example, so my 20w assumption was based on 20w PEP SSB. Looking at the components, I would say it should easily handle 20w PEP SSB. I’ll see when I get it and get it built.

As for the power rating: Mini-Ringkernrechner, a popular software in the German ham radio community, says that even the smaller T50-2 core would easily handle 10 W with a 100% duty cycle. The flux at 23 Vrms (10W) will be 2.3 mT, while the core can handle 5.7. And that is for the T50. My guess is that they are using T 68 cores because otherwise you will have to use 0.4mm magnet wire, which might increase losses. And actually the max flux will be lower.

I am currently building a variant of this antenna design with T50-2 toroids and 0.4mm wire. The losses due to the smaller wire will likely not be very relevant in comparison to the ground losses.

Heinz, HB9BCB pointed me to the excellent works by Gerd Janzen (DF6SJ) on short antennas, and Wolfgang Beer (DK2FQ), namely this one (in German):

By means of simulations, he shows that elevated, resonant radials are much more efficient that those flat on the ground. So I guess that 2 elevated (maybe sloped) radials will improve the vertical remarkably.