Holme Fell, it's a British Summer!

Wow, it’s been hot here. If tik-tok is to be believed (please don’t go there if you value your time) British summers are a special kind of heat. Well, I don’t know about that, what I do know is don’t wear synthetic t-shirts on ascents!

It was later in the afternoon when I tackled Holme Fell G/LD-051. There were a number of options along the taxi route I took for Brooke and her friends from their party location near Settle but we ended up in Coniston where I left Brooke and her boyfriend play in Coniston Water (very warm apparently) whilst I took to the ascent.

There were two motorcycle accidents on the route - please take care if you ride. One was clearly a van pulling out from a layby - I don’t know how fast the bike was going. Ride within visibility always. The Settle road is a famous biking route with Kirby Lonsdale and specifically Devils Bridge being a popular destination to ‘hang out’ with other bikers - today there must have been close to 100 bikers parked up there with the same amount enroute.

I had a few radio options in the car but chose the FT-857D already in the rucksack together with the SotaBeams Band Hopper IV, 10m compact pole and 21AH LifePo4. Yes, that battery again! Somehow carrying the battery via a handle seems easier than carrying 1 or 2 x 4200 mAH LifePo4s in the rucksack. I don’t think the knees agree however.

I anticipated there would be few mad enough to tackle any hill in this heat and I was proven right being the only occupier of the summit for the two hours I was there. There was a light breeze which helped, and the odd cloud for some relief. I’d been shopping earlier for some supplies for our pending trip to Rhodes so deployed the newly bought factor 50 before the ascent.

I setup the Band Hopper IV and immediately had another wire breakage - I think it is time for a restring as this has happened several times now. 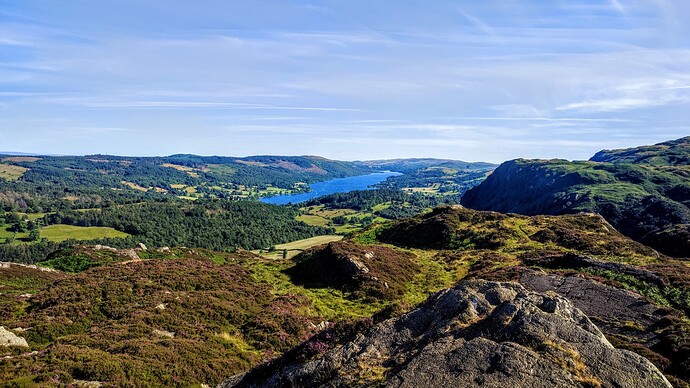 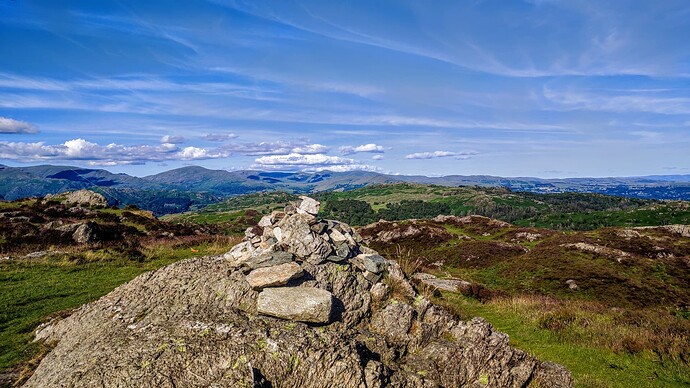 Using 50w with the FT-857 and the Spectrum Communications Slim-J got me a few unexpected contacts including Mark G7SXR in Leeds and G4JNN in Bradford.

Starting with 20m to get a S2S with Martin F4JJD on F/CR-258 I then had a good run of contact on 20m. The QSB was having an effect on weaker signals and I had to request callsigns a few times. 40m was working both Inter-G and into Europe.

Only one taker on 80m - I’ve not used it much as I haven’t been using the Sotabeams Band Hopper lately and it is the only antenna that will sensibly do 80m. I did try 60m, no takers.

Not many takers on 20m CW given that I was putting out a 100w CW signal, but great to get across the pond with Matt @W4GO and deep into Europe with Kosmas @SV2SOQ - apologies to him, I’m still loitering on misheard letters instead of re-listening to the repeats, but we got there in the end! I was using the palm straight key, hopefully it didn’t sound too eratic. Great to finish with another S2S with Emanuele @IZ0ETE who was on I/UM-101.

A lovely day in the Lake District but almost too hot for activations! 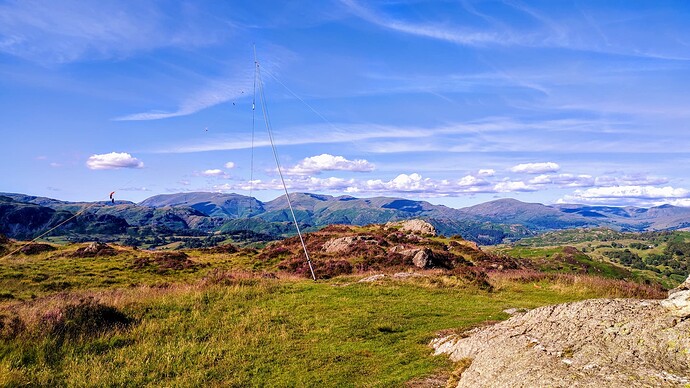 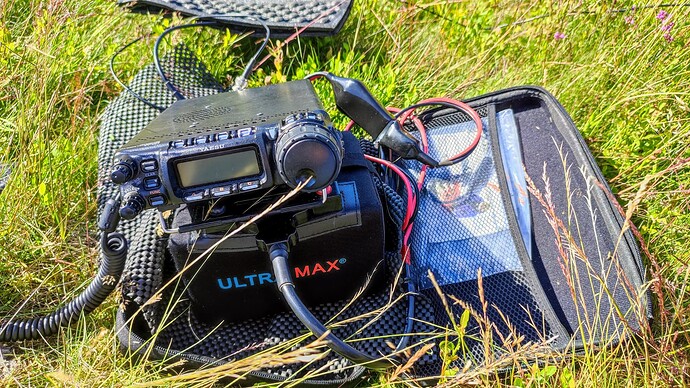 There is a large boulder on the ascent/descent to Holme Fell from Yew Tree Tarn, I’ve probably taken a photo before but here is a photo with me infront, just to give some scale! 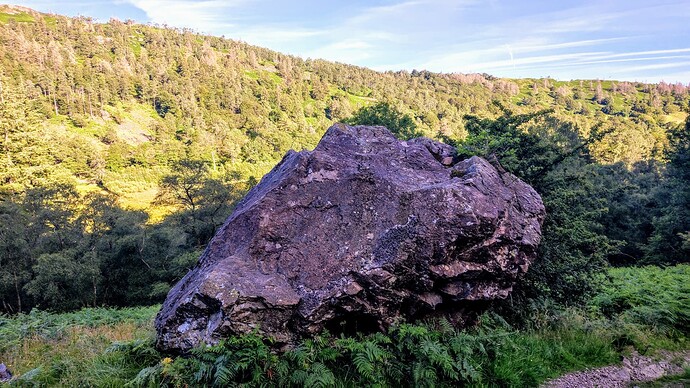 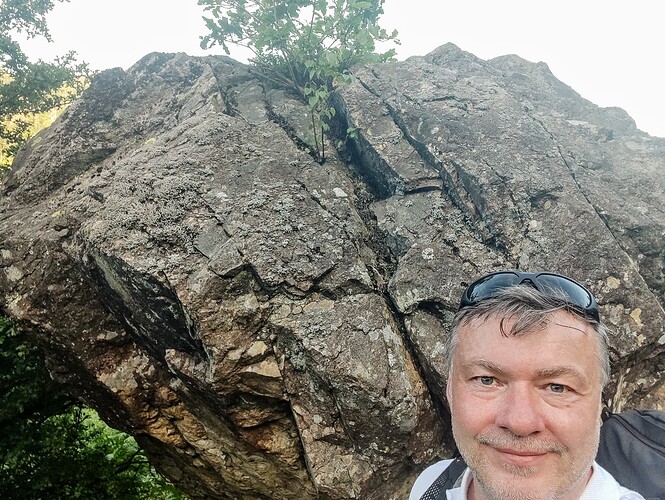 Thanks to all the chasers, it was late in the day for SOTA but a worthwhile trip.
Time to get that Band Hopper 4 restrung with fresh antenna wire. 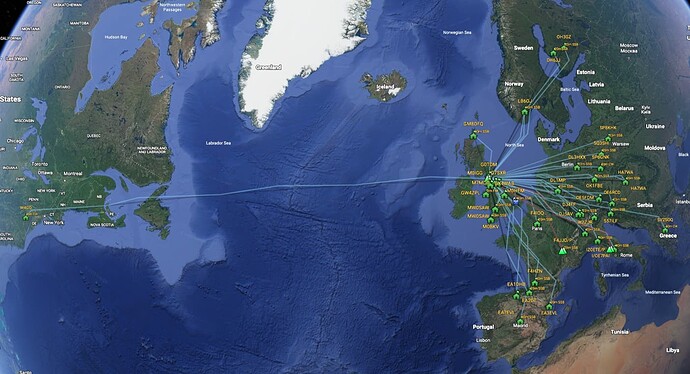 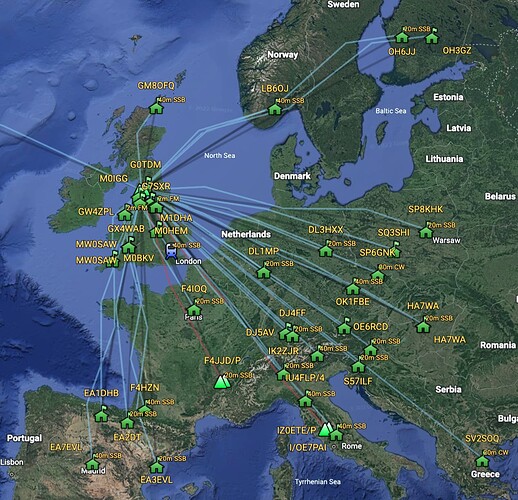 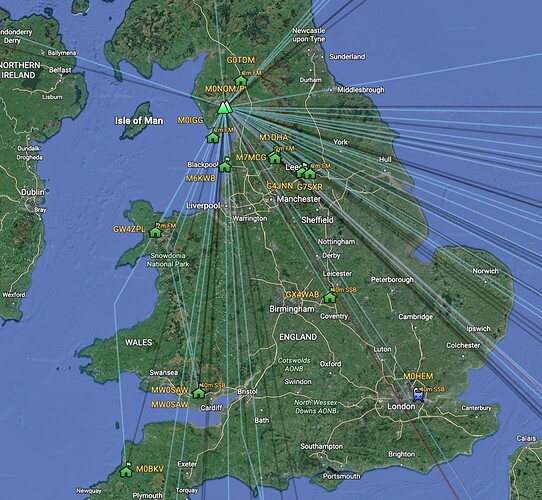 Thanks Mark for you great report and photos. At my qth we usually get 30c to 45c in mid summer. In other parts of vk it gets even higher. Just nice.

Firstly, thanks for being such an emphatic liker of my posts!

The hottest I’ve experienced was a few days on holiday in Spain when we first arrived one year - it was 42 degC. There was no air conditioning in the apartment either.

I think the issue today was humidity and inappropriate clothing more than anything else. The shorts were fine, but the t-shirt a totally unsuitable material for walking in!

That’s a steep little climb in this heat Mark! Glad to see you chose the lightweight option.
Mid-20s is nice. Anything more is a waste for me. I prefer the cold

Nice report but I’m curious about this:

I always wear synthetic clothing while walking (apart from some wool in the socks) and it’s very comfortable in all weathers. Cotton would be hideous.

Yes. I’ve been wearing Iso-Cool tops from Mountain Warehouse for years. There’s the ultralight ones for warmer weather and heavier ones for cooler weather. The lightweight ones are £9.99 each or you can buy the same think from the tier one brands for about £35 each.

Inappropriate clothing is maybe more applicable then. A cheap top from Primark, probably made mostly of plastic, it felt about as comfortable as walking in a bin liner

My walking clothes are also made from plastic, being mostly polyester. The T-shirts are cheap Peter Storm that I have had for years. I guess it’s the way they are spun and woven that affects how comfortable they are. Anything is better than a cotton T-shirt though!

Amazed that you guys keep your clothes on in the hills in this weather. A thin coating of factor 50 is all that is required.

Two things. Firstly, no-one needs to see that! Secondly, my wife has had skin cancer so I am uber sensitive and don’t trust suntan lotion not to wash off in waves with exercise. The ‘gunky’ stuff is probably fine however.

Each to their own. Maybe save it for the national naked hiking day

The ‘gunky’ stuff is probably fine however.

I used the cheap horrible gunky white stuff for years. It has worked well. I recently found that suncreme does have a shelf life of under 3 years and the stuff I was using was bought in 2010. Before you joke about sun and Scotland it was a huge bottle that refilled a small 50ml tube I took with me. Given that famous line from Rambo “he got himself killed in 'nam and didn’t even know” I decided to bin it and buy a new bottle. Not worth taking the risk of using a product that isn’t working for a few pounds. Bought the same gunky white stuff again.

During several of my business trips to Adelaide it was that temperature. It was my first experience of having sweaty legs merely strolling in the park in long trousers.

Cotton would be hideous

I wear a linen top for hillwalking when it gets this hot. I reckon readers from countries where it gets really hot and often are laughing at us cissy Brits making a fuss because we’re having a bit of a heatwave at the moment.

We don’t want to frighten the sheep now, do we.

There is usually a distinct difference between 28C in England and 28C in say Tenerife such that 28C in England is a lot less pleasant. Similarly people who live where it is 10+C hotter than the UK are very susceptible to feeling cold. I’ve been at my sister’s QTH near Nimes in Decmber and it has been a balmy 15C and I have been in a T-shirt and shorts thinking it’s only a degree or 2 cooler than a Scottish Highland summer day and she has had a Down jacket with hat and gloves on as it is “so cold”

The humidity makes all the difference. I recall changing jobs in the early 80’s and moving from Munich to Boston, USA. It was the same temperature at both airports, very warm but comfortable in Munich but as soon as I stepped out of the air-conditioned building at Logan airport, my shirt was a pool of sweat.

Killer views. I was pleased and slightly amazed to hear you as well as I did – the QRO gear explains it. Daytime in the summer is not great for the NA-EU path and I haven’t been able to copy many of the EU/UK activations lately even on CW. On my end, 100 W to a SpiderBeam pointed at EU.

When I built my homebrew take on the BandHopper, I opted for a bit stouter wire – 22 AWG with thick teflon insulation – than the original and don’t regret it a bit.

22 AWG with thick teflon insulation – than the original and don’t regret it a bit.

Great to get you in the log Matt, and nice to know you were using KWs.
I have a home built equivalent that uses stouter wire, but it has a long run of RG58 which adds significantly to the weight, so I may place that with the RG174. However, it’s just with the shear amount of use that the thin wire has problems, I do get my money’s worth!

I bought 2x 25m lengths of PTFE covered stranded wire at the FN rally for €8, overall 1.2mm OD and about 0.5mm for the conductors (looks like 13 strands). Looking at prices online that was a stunning bargain and I should have bought much more.

Never snapped a conductor yet, only had the joints to connectors fail.

but it has a long run of RG58 which adds significantly to the weight, so I may place that with the RG174.

You may want to consider trying something a bit more flash. There’ll be more (quite a big bit more) loss with RG-174 especially if it’s a longer run at higher HF frequencies. You can try using Messi&Paoloni Airborne 5 coax. It is much lighter than RG-58 but is only 5mm OD and has significantly lower loss. It’s not as ultimately “floppy” as RG-58 but is very flexible. Probably £1.50/m plus the crimp on connectors but you’d end up with something ever so much better than RG-58 with a big weight saving. A guestimate is you can make a 10m length with connectors for about £20. Just a thought.

My plan was to buy a 10m run of RG174 from SotaBEAMS with connectors already installed. I have crimp tools for RG-58 but would rather pay the money for reliability than install connectors on RG-174.

pay the money for reliability than install connectors on RG-174.

Try it when your eyes are another 10 years older!