Thought we would do a simple 2 pointer only today and this one was on my list to be done as it is less than 80km from home QTH. Simple enough drive along A55 then A483 down to Oswestry. Roads from here were quiet narrow with cars passing us only on the even narrowier sections!! Deciding to take route up from Moelfre Hall,instead of Richards Spot at Llangadwaladr. we reached it in plenty of time to get up and set up. No spots on road to park so approached the farmer in open space area when I explained what we wanted to do and He most kindly told me to park my car in an area where he could see it on his land. Both Elaine and myself were most grateful and agreed he was thorough Gentleman.

The path up starts from one of his gates at the back,it is actually a vehicle track that goes right up to Trig if using a four wheel drive type vehicle. For those that dont want to walk up you could go to about 400m asl where there is a park spot for one maybe two vehicles. We set off and the path started to incline from the off,getting steeper as it winded itself up and around to approx 350m it then turns sharp left and winds further up to Trig,but we decided to follow path that was alongside the wall/fence that led directly to top with a level walk left into Trig.

Setting up with 30 mins to spare,we were joined by 2 Mountain bikers who had come up from Llansilin,a father and son who had a keen interest in what we doing especially when I set up the 20m flexweave dipole on the perch rod. then just before switching on and getting going , a 4 wheel drive had arrived at top and let off about 8 Suicide mountain bikers who went down the summit at a rate of knots leaving the ground most of the way down.(Extreme Thrill seekers who had my nerves gone a few times.)

Switched on and immediately heard G4ERP/P on LD-027 so S2S with him and then G4YTD/P on LD-014 second S2S in Log. I shouted on 300 for some time before 2E0GRM/P not SOTA but welcome all the same.Then G0TRB got me and put a spot on. 9 more contacts on 2m ssb after me shouting went quiet so decided on lunch and a Brew before trying HF. Checking spots as my plan was to try for S2S with Luc on Kos Island, I followed him to frequency but could not hear him at all(shame). Did find Mads on 20m and after a couple of exchanges due to QSB we got details exchanged(Thanks for your patience Mads!! QSL on the way) my First ever HF S2S thanks!! tried 40m but QSB and busy I could not find a spot to CQ and trying to get some contest stations most of them had pile ups so gave up trying as my battery was taking a pounding with 30 watts output. back to VHF before we decided after 2 hours up there to get down, 3 more S2S on 2m FM.

Overall this one was a bit tough walk in as it can be very steep in places this was confirmed on way down as we had sore knees from stopping ourselves from running down! It took 1hr 10 mins for us to reach Trig,resting often.

Thanks for all who contacted us and all logged in Database,with a couple of pics on Flicker.

Did find Mads on 20m and after a couple of exchanges due to QSB we got
details exchanged(Thanks for your patience Mads!! QSL on the way) my First
ever HF S2S thanks!!

Thanks for the S2S QSO! The reason why initially had some trouble reading you was another station calling on top of you. My QSL card is also on it’s way. 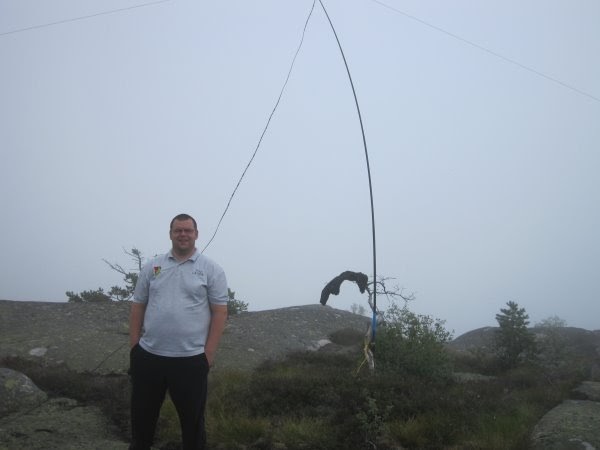 Aage LA1ENA and I activated LA/TM-088 today. My mother in law has fed me well this summer and Aage was very patient to wait for me when I ne...

Thanks Mads, Really happy to get S2S with you, especially on HF, another unique contact.

Read the Blog thanks for including my Callsign for acknowledgment!

Hoping for much more in the future!!

In reply to 2E0LAE:
Advice please on best approach to gaining access permission from Moelfre Hall?

Does one drive into the front yard of the hall / farm and knock at the estate office to request a parking spot and access to the track?

I see that they have downhill mountain biking events on the track in question from time to time with tractor and trailer uplifts !! - strange sort of cyclist]. There are two hang glider take-off sites on the track too. I added that one as an external link to the summit page as the sketch map is good. So I can conclude that the estate does leisure activities.

I hope to be QRV this Friday from the summit. I don’t think I’ll have time for too much HF. I’ll try to field any QRSS cw replies [best on 2m] though I expect my Palm paddle will send all sorts till it’s warm and dry like it did in last night in cw class! I’m off to Mynydd y Briw after as it’s nearby and a short walk to match diminishing time till it’s dark.